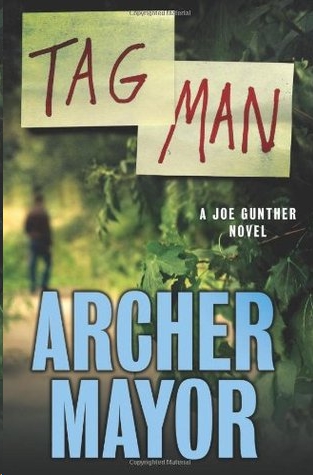 a belated welcome and heartfelt thanks

for the light you bring with you

As I have often stressed in earlier acknowledgments, I rely upon, and am grateful to, many others in the writing of these books. They share their experiences, give me some wonderfully creative ideas, and give me the benefit of their editorial expertise. It is all greatly appreciated.

My deepest thanks, therefore, to:

Other Books by Archer Mayor

He sat in the center of the love seat, in the darkened bedroom, settled against the soft pillows behind him. His hands, clad in thin cotton gloves, were folded in his lap; his feet, wrapped in blue surgical booties, stretched out beneath the neatened coffee table before him. High above, dangling from the post-and-beam cathedral ceiling, an ornate Hunter fan barely stirred the air, setting the mood for the sleeping house.

The man was in his realm; the king of his castle.

The standard audible vital signs of any home added to the tranquility—the furnace’s occasional rumbling two floors below, the rhythmic heartbeat of the grandfather clock on the first floor, the deep and regular breathing from the two people in the big bed across the room. In a place this vast and expensive, he half wondered if he couldn’t hear the very walls chiming in, carrying within them the wiring and fiber optics of Internet connections, TV cable, high-tech security, fancy phone systems, dimmer switches for mood lighting, a camera hookup to all the building’s entrances—a veritable nervous system.

The house was a palace, certainly by Vermont standards. Standards that were escalating with the steady influx of wealthy outsiders—dreaded “flatlanders” to the locals—especially following 9/11. But he wasn’t among the complainers. The newcomers offered him that much more to explore.

He rose without a sound, drifted across the carpeted floor to the bedside, and gazed down upon its occupants. A man and woman, he in his sixties, she younger, beginning their struggle with the aging process, he less successfully than she. Her outline under the sheet showed an athletic body, with enough of her bare back revealed to confirm it—along with the added detail that she either slept in the nude or at least wore no top. Her husband was the more traditional lump—too much alcohol and snack food. An earlier tour of the workout room had revealed her presence to the exclusion of his.

They slept far apart on the king-size mattress, their respective night tables cluttered with telltale belongings—glasses to replace contacts; nasal strips to control snoring; ointment for sun spots; under-eye cream to stem bags and blotching. On her side there was a small bottle of K-Y lubricant, to ease her through those rare amorous moments when her husband journeyed across the bed’s extended acreage.

The lump was named Lloyd, which their uninvited guest found amusing. Her name was Lisbeth, shortened to Liz only in the notes from husband to wife that he’d perused earlier in her office nook off the kitchen. Everyone else appeared to call her by her full name. Lloyd, of course, had an office to himself—large and pretentious. That had been worth exploring, from the easily defeated computer password to the contents of a small cardboard box attached to the back of a foreshortened desk drawer. The man wondered if Lisbeth knew anything about that—separate bank accounts and financial records, all in Lloyd’s name only, not to mention a few letters from, as the quainter novels used to put it, “a woman not his wife,” named Susan Rainier. He’d been unable to resist doing a little tampering there, to guarantee that Lloyd would know without doubt that he’d had a visitor. Pure ego, of course. He knew that. A little male-to-male competition. Childish, in fact, and thus all the more irresistible. He’d stolen one of the letters, a whole packet of incomprehensible financial papers—at least to him—and generally rearranged the rest of it, just to drive Lloyd crazy.

He did sympathize on one level, if only one. It had to be hard to set such high expectations and then struggle to meet them daily, even if the aim was selfish, artificial, duplicitous, and—for all he knew—illegal.

The man moved to the bedroom door and stood looking out. An interior balcony extended to both sides of him, overlooking a gargantuan living room. Far opposite, a wall of windows surveyed immaculately groomed fields, now glowing like dull silver in the warm, early-summer moonlight.

He considered the conclusions he’d reached about these two. Huge overhead, staggering bills, social expectations from all corners, embarrassing secrets. An impressive burden of toil, cost, supply, and demand based on nothing more important than the choice between cashmere and lamb’s wool. But he wasn’t condemning. After all, he spent considerable time researching how and when to break into places like this—without leaving any trace of his methods. Wasn’t what drove him as important to him as Lisbeth’s eye cream was to her, or Lloyd’s secret stash to him?

Each of us just struggles to keep in balance, he thought blandly, as banal and unsatisfying as that seemed. In his case, he saw himself as a night stalker, a collector of information useful either as a means of support or as pure intelligence about his fellow human beings. He had homework to do, and this was how he did it. To others, he’d be a slightly eccentric burglar.

He leaned forward and placed his hands on the railing, absorbing the feeling of superiority and control. They wouldn’t understand how he
enjoyed
the knowledge such moments provided. That was
his
need. He left these clandestine encounters richer for the perceptions he gained.

He and his daughter, Sally, had once chatted about which super power they’d most enjoy having. She’d said flight, not surprisingly; he’d chosen the ability to transmigrate walls. Like a ghost. All-seeing but invisible. The closest she might get to reality was through a pilot’s license and a plane, many years and much cash later. He was all squared away.

He heard a rustling behind him and quickly stepped out of sight, then glanced around the corner to confirm it was only a little tossing and turning.

Still, he’d been here for a few hours, wandering throughout the house, poking into closets, drawers, and, of course, the fridge. No point overstaying his purloined welcome.

He reentered the bedroom and returned to the sleeping couple, standing on the woman’s side, close enough that if he bent over, he could kiss her naked shoulder blade. Yielding to temptation, he did at least bow, not to kiss but to feel the heat of her in his nostrils. She smelled good.

Finally conceding that the time had come, he extracted a one-inch square piece of yellow paper and stuck it carefully to the woman’s small bottle of lubricant.

TAG!
it said in bold letters, inscribed with a broad felt pen. Maybe he didn’t want to reveal his method of entry, but he liked their knowing he’d been here.

He gave them a last smile before fading away toward the bedroom door and the world beyond.

Willy Kunkle pounded on the door of the Brattleboro PD’s detective bureau, located across the municipal building’s central hallway from the dispatch center, patrol room, and chief’s office. Nowadays, he worked for the Vermont Bureau of Investigation, just upstairs. But he’d worked here once—for years, in fact—and it still pissed him off that he’d had to surrender his passkey—enough to guarantee that each time he came by to visit, he knocked as if wielding a sledgehammer.

The flimsy wooden door swung open without revealing anyone, its empty frame substituting for the underwhelming greeting of the cop already retreating inside. “Hey, Willy. What’s up?”

Willy entered and pulled the door to, addressing the man’s back.

“What’s
up
?” Willy parroted sarcastically. “Ronny-boy, you are a serious disappointment. The people you pretend to serve and protect are exposed to peril, crying for help, their homes invaded and violated, and you ask, ‘What’s
up’
? I thought you
cared
.”

Without looking back, Ron Klesczewski, the unit’s chief of detectives, laconically held up a middle finger before rounding the corner into his small office.

Willy laughed and followed him in. Klesczewski settled behind his desk and pointed to his guest chair as an invitation. “You want coffee?” he asked.

Ron hadn’t expected him to accept. “Wild guess: You heard about last night.”

“‘The Tag Man strikes again,’” Willy intoned dramatically, drawing his one good hand across the air as if Braille-reading the headline that decorated that morning’s
Brattleboro Reformer
. “Kind of hard to miss.”

Ron leaned back in his chair and clasped his hands across his thin stomach. Both desk and chair—indeed, the whole office—had once belonged to Joe Gunther when he’d headed this bureau and Ron and Willy had worked as his detectives. That seemed a long time ago.

Willy waved that off. He and Sammie Martens, although still unmarried, had just had an infant daughter. Sam had worked once here, too, and now shared the workload upstairs with Willy, Joe, and a third investigator named Lester Spinney, all of whom made up the entirety of the regional VBI office.

“Keeping me up all night,” he answered gruffly, although not, Ron thought, with the usual biting edge.

Willy scowled. A complicated man, he could be at once dismissive and caring. He was a crippled, ex-drunk military sniper who was also a judgmental neatnik with little patience, yet capable of staying on surveillance for days at a time or conversing with idiots most sane men would shoot to shut up. Ron didn’t know it, but years earlier, Joe had snuck up on Willy at a stakeout and discovered him pencil sketching with an artist’s talent—an ability the latter had sworn Joe to keep secret.

As if to prove his perpetual contradictions, the normally thin-skinned Willy now ignored Ron’s jab, and simply inquired, “Who do you think the Tag Man is?”

Ron shook his head slightly. “Dunno. The only hot clue we ever got led us straight back here.”

“The first Post-it he ever left,” Ron explained. “Or at least the first reported to us. It had a thumbprint on it—crystal clear. Belonged to one of the women in Dispatch. We figure she stuck the note on some form and slid it under the glass, like a bookmark—who for, nobody knows.”

Willy was laughing softly. “So he has a sense of humor.”

“And he never steals anything,” Willy commented, recalling the news coverage he’d read.

Klesczewski equivocated. “Actually, we held that back. Technically, he does. He always eats something out of the fridge.”

Ron smiled despite his frustration. “Good stuff, too, and he doesn’t just grab and nosh. He spreads caviar on crackers, maybe pours a little champagne if it’s there.”

Willy absorbed that thoughtfully, adding finally, “And that’s all he does? Eat and brag? Nothing else? No vandalism? No jerking off on women’s underwear? Doesn’t seem worth the effort.”

Ron shrugged in response, but his brain began considering the same incongruity.

Willy shoved himself out of the chair with his right hand; the other arm, withered by a bullet years before, was anchored to his side by having its hand buried deep in his pants pocket.

“I think he’s doing something more, and you guys’re too dumb to notice it,” he declared, heading for the door. “Good thing we only do major crimes upstairs, or I’d make you look bad. You owe me if I’m right,” he added before disappearing to go to work.