Read Tailor of Inverness, The Online

Tailor of Inverness, The 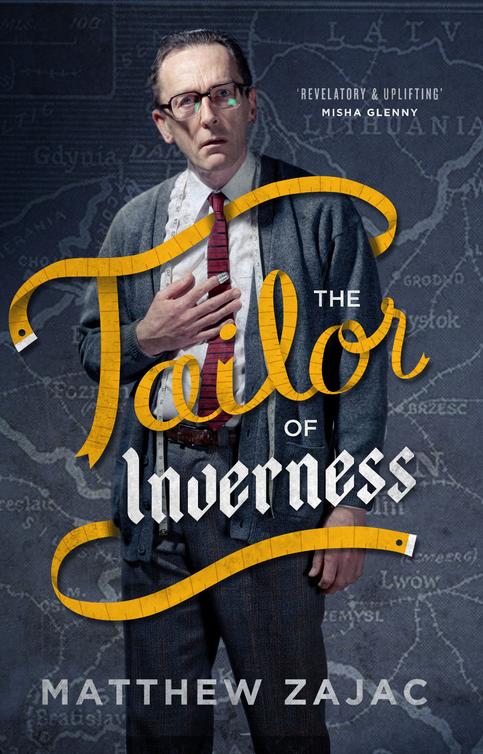 Praise for this book

‘Matthew Zajac’s breathtaking investigation of his father’s
mysterious
past has taken him into the darkest corners of Central Europe’s 20th century history. Out of a merely curious son develops a forensic investigator who peels back the lies hiding truths not just about Nazism and Stalinism but also the puzzling but energetic mendacity of his own father. Zajac’s winning personality, however, turns what might have been a sustained exploration of pessimism into a revelatory and uplifting examination of self, family and national identity. Matthew’s final discovery is heart-stopping and sincerely moving. This book ploughs a parallel furrow to
The Hare with Amber Eyes
.’

Misha Glenny, author of
The Balkans, McMafia,
and
Dark Market,
writing of this book

Praise for the play
The Tailor of Inverness
by Matthew Zajac ‘… a beautifully realised tale of the reality of survival in war-torn Eastern Europe … Matthew Zajac’s moving performance is a triumph of evocative staging and storytelling.’

‘…brilliantly encapsulates the effects of war on individuals, families and societies… As the truth becomes less and less certain, so the fracturing impact of the war grows more tangible, lending this touching personal story the grand metaphorical weight of 20th-century history. All this and live fiddle too.’

‘This is a towering piece of work with a glorious performance by the author.’

THE TAILOR OF INVERNESS

For Virginia, Ruby & Iona
For my mother
For Anna Kotek
For Irena

Blown by the wind

I pinned it to my heart

Squeezed through the rubble

And the air between the censor’s hands

Its creases match mine

Is my bitter sister

I pinch and tear at her absence

Though she was never born

Your stitching is strong

Your fear folds in the shadows of the skirt

I wear it and watch

PART ONE: Inverness to Lesna

1: The Poles of Inverness

5: The Persecution of the Flies

8: The Tailor of Inverness

18: At the Ternopil Theatre

23: The Meaning of Ancestry

24: Communing with my Ghosts

Me and my father Mateusz, the electric flats, Dalneigh 1961

Tailoring school group, Podhajce 1938. My father is on the front row, far left

Poland and its borders 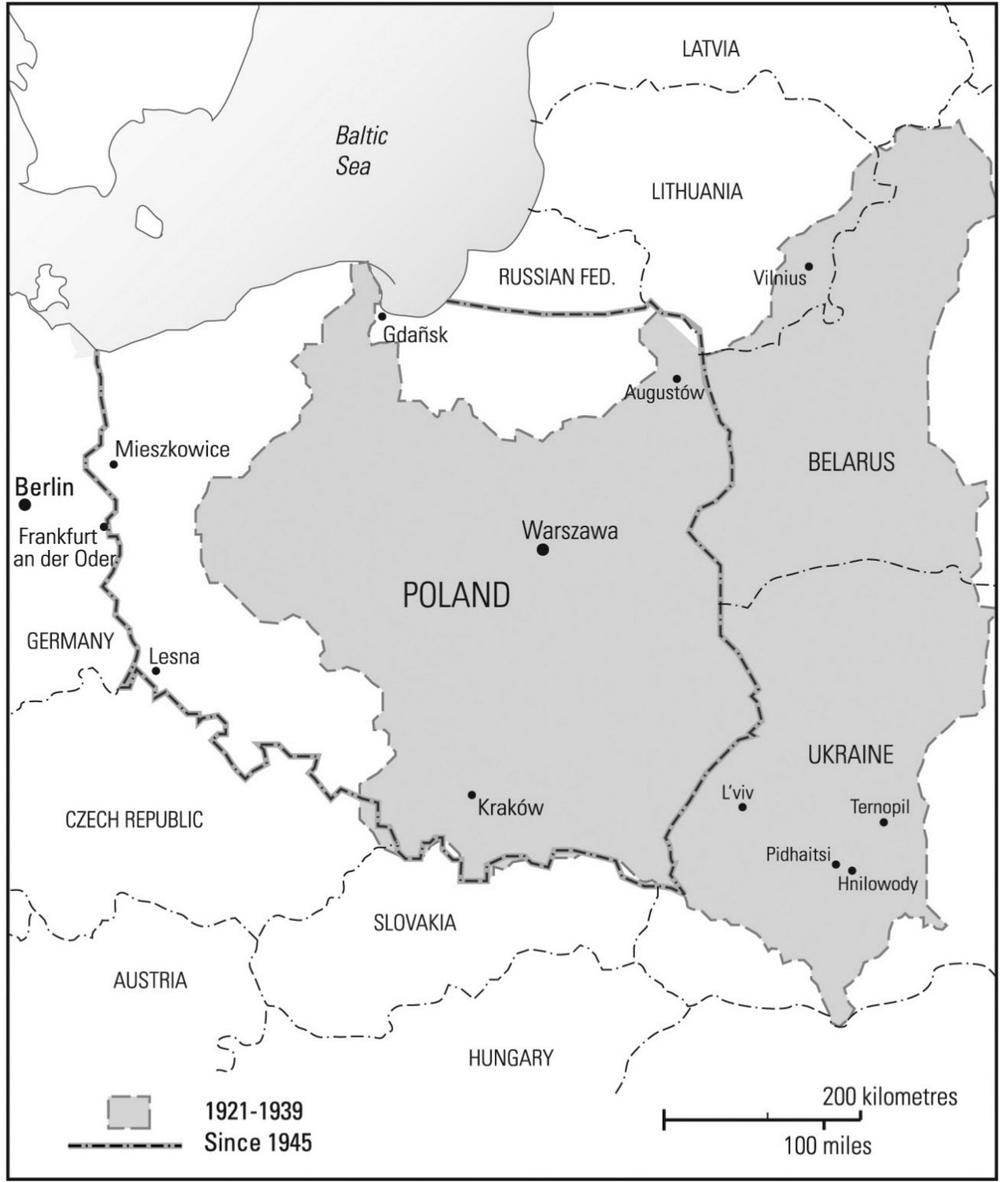 I’ve got this thing inside me which I need to get out. It has been there since I was born and it has grown as I’ve grown. When I was a child, a teenager, a young man, I wasn’t aware that I would feel a compulsion to purge it, but that changed around the age of 30. I’m 49 now, and I’ve reached the point where I start to write this book, where the purge begins. Purge. A word with negative connotations in modern times, when associated with politics. Not for me though, as I begin my personal purge, my clearing out.

Although a purge can suggest atonement, a spiritual cleansing, mine won’t have that effect. It won’t have a moral dimension. Perhaps purge is the wrong word. Perhaps the full meaning of this exercise, its payback, will remain elusive.

This purge is about self-expression and although I’m confident of the therapeutic power of the process of
self-expression
, for me anyway, which this book represents, I don’t wish to express everything. Indeed, I can’t. Some of the history is incomplete, unknown in spite of my best efforts. I present this story to you in the knowledge that questions will remain.

The thing I need to get out is my father’s story. His name was Mateusz Zajac. He was a Pole. I inherited his name, with
the English form Matthew, which he also adopted when he settled in Scotland. He was a tailor. He started his own business in Inverness, the main town of the Scottish Highlands, in 1956.

So that’s what this book is: a striving for an understanding of where I’ve come from, of the past which has produced me, of places, of myself, of my father. Of a farm in Ukraine, formerly the Ukrainian Soviet Socialist Republic of the Union of Soviet Socialist Republics (USSR), formerly Poland, formerly the Galician region of the Austro-Hungarian Empire, formerly Poland. It’s a journey, both physical and – what? –
psychological
, spiritual, rational? All of these, I suppose, although I wouldn’t describe myself as religious at all.

I want to make contact with my origins, with my father’s origins, to open a route which was closed to him in September 1939 with the German and then Soviet invasions and partition of Poland. A route to his home in the village of Gnilowody, near the town of Podhajce in the Tarnopol region or, as one should say today now that these places are Ukrainian, not Polish, a route to Hnilowody, near the town of Pidhaitsi in the Ternopil region. A route to his parents. He told me that after September 1939, he never saw them again. That
information
is contained in Part Three of this book, edited transcripts of conversations I recorded with him in 1988, the year before the Berlin Wall came down.

My generation had grown into adulthood as Soviet Communism ossified and then stumbled towards relinquishing its power over its satellites. In adulthood, I had begun to be more conscious of the pain caused by the wrenching apart of my father’s family and the impossibility of him ever seeing his birthplace. So much was unknown, censored, oppressed. I began to feel a need to unlock it all. That’s why I made the recordings with him. They were my starting point, but it took me a long time to go any further. I was hampered by the preoccupations of my work, by my lack of Polish, by my own
urge, inherited or learned, to live in the moment and look forward.

My father’s energetic, single-minded drive to create his new life in Scotland, to ‘never look back’ had been a success in many ways. He had brought up well-educated Scottish children. He was highly respected and well known in Inverness and the Highlands for his work, producing beautiful suits, coats, Inverness capes, skirts, kilts, plus fours and hunting jackets and making alterations to everything from evening dresses to jeans. He had a long-running contract with the RAF base at Kinloss. As an important mark of his integration into Highland life, he had been accepted into the Freemasons. His life, and ours, was orientated towards succeeding in the world we were in. There was no going back. Except for the holidays.

When I made the recordings, I had an idea that I might want to write about him one day. I envisaged a book, what you now have before you. But when I first started to think seriously about writing it, it was a daunting prospect as I had never written a book and didn’t consider myself to be a writer. I had dabbled in writing from time to time, experimenting with a couple of screenplays and short stories and the
occasional
poem and song, but I had never felt the compulsion which I think is common to true writers. I guess that has changed now.

During the years of my discoveries about my father, I remained unable to find my way into writing this story. Then one day, I think in 2006, I saw what was staring me in the face. I had spent a large part of my professional life working with new plays, acting in them, commissioning and producing them, and I had my own theatre company, Dogstar, started in Inverness in 1999 by my friend and colleague Hamish MacDonald. I joined him to run the company in 2003. I knew a lot more about plays than I did about prose writing, so why not try writing a play about my father first? And that’s what
I did, though it’s not a conventional drama. I sometimes wonder if you can even describe it as a play.

The Tailor of Inverness
opened at the 2008 Edinburgh Fringe Festival at the Assembly Rooms and to my great joy and surprise, it was an instant hit. Eighteen of its twenty four performances sold out. Hundreds of people failed to get a ticket. The production won a clutch of awards. Since then, it has toured three times in Scotland and to Poland, Ukraine, Germany, Sweden, Denmark, Ireland, Australia and the USA. The response of audiences in each of these countries has been quite overwhelming.

The success of the play gave me the confidence and the motivation to get on with writing the book.

Here it is at last.

Mãn by Kim Thuy
How to Deceive a Duke by Lecia Cornwall
Little Brats Sara: Taboo Forbidden Erotica by Selena Kitt
The Bondwoman's Narrative by Hannah Crafts
Heightened: The Federation Series by Miria Masdan
Empire of the Ants by Bernard Werber
Lean on Me (The Mackay Sisters) by Verdenius, Angela
Cemetery Road by Gar Anthony Haywood
The Red Dragon by Tianna Xander
Troppo by Dickie, Madelaine
Our partner