Read Target in the Night Online

Target in the Night 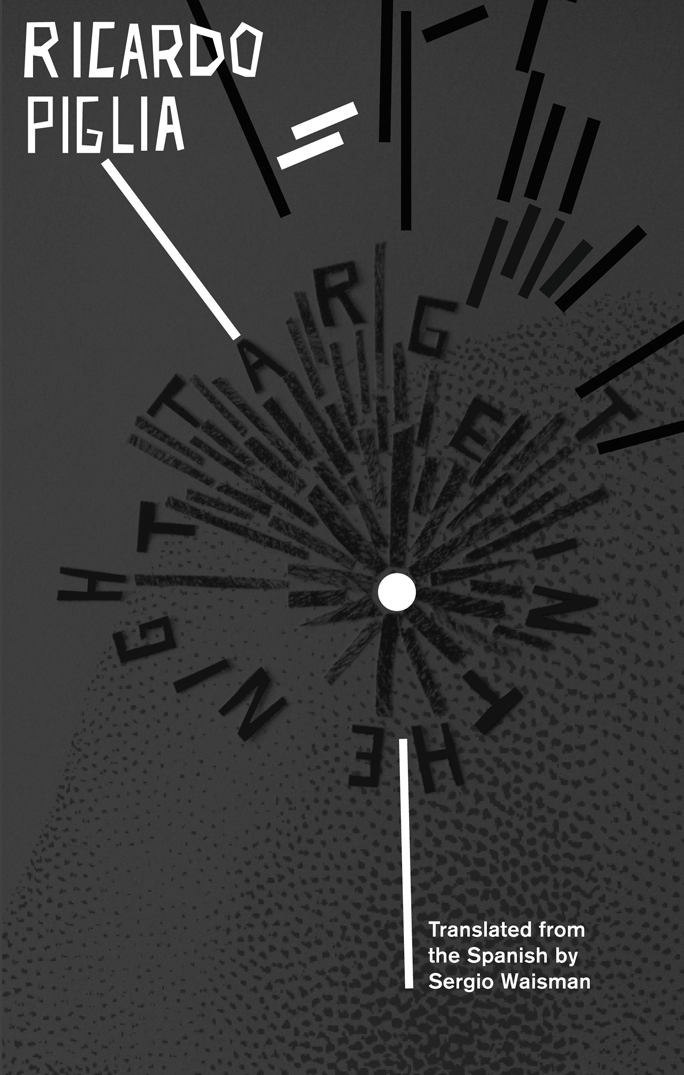 “Piglia demonstrates perfect mastery of his art. Nothing is there just for the sake of it.”
â El PaÃ­s

“Ricardo Piglia is an extremely important literary figure. He has inherited Borges' quizzical intelligence, enthusiasm for the tireless exploration of literature and attraction to hidden depths. Piglia's fictions trace inventive parabolas over the past nightmarish events of his country.”
â The Independent

“One of the sharpest minds on the latino-hispanic-american scene todayânot just in Argentina.”
â El Cultural

“Latin American noir at its best
â
and further evidence of Piglia's remarkable versatility and skill.”
â Kirkus Reviews
on
Money to Burn

“One of Latin America's most highly regarded novelists. Piglia brings into play a swirl of tales mixing dark truths with hallucinatory adventures.”
â
GWEN KIRKPATRICK
, author of
The Dissonant Legacy of Modernismo
, on
The Absent City

“Piglia is Argentina's most important novelist, a compelling writer and committed intellectual who relentlessly deals with the complicated relationships between politics and fiction. And Sergio Waisman is an exceptionally gifted translator with a wonderful ear and eye for the reverberations of Spanish in English.”
â
FRANCINE MASIELLO
, author of
Between Civilization and Barbarism: Women, Nation, and Literary Culture in Modern Argentina,
on
The Absent City 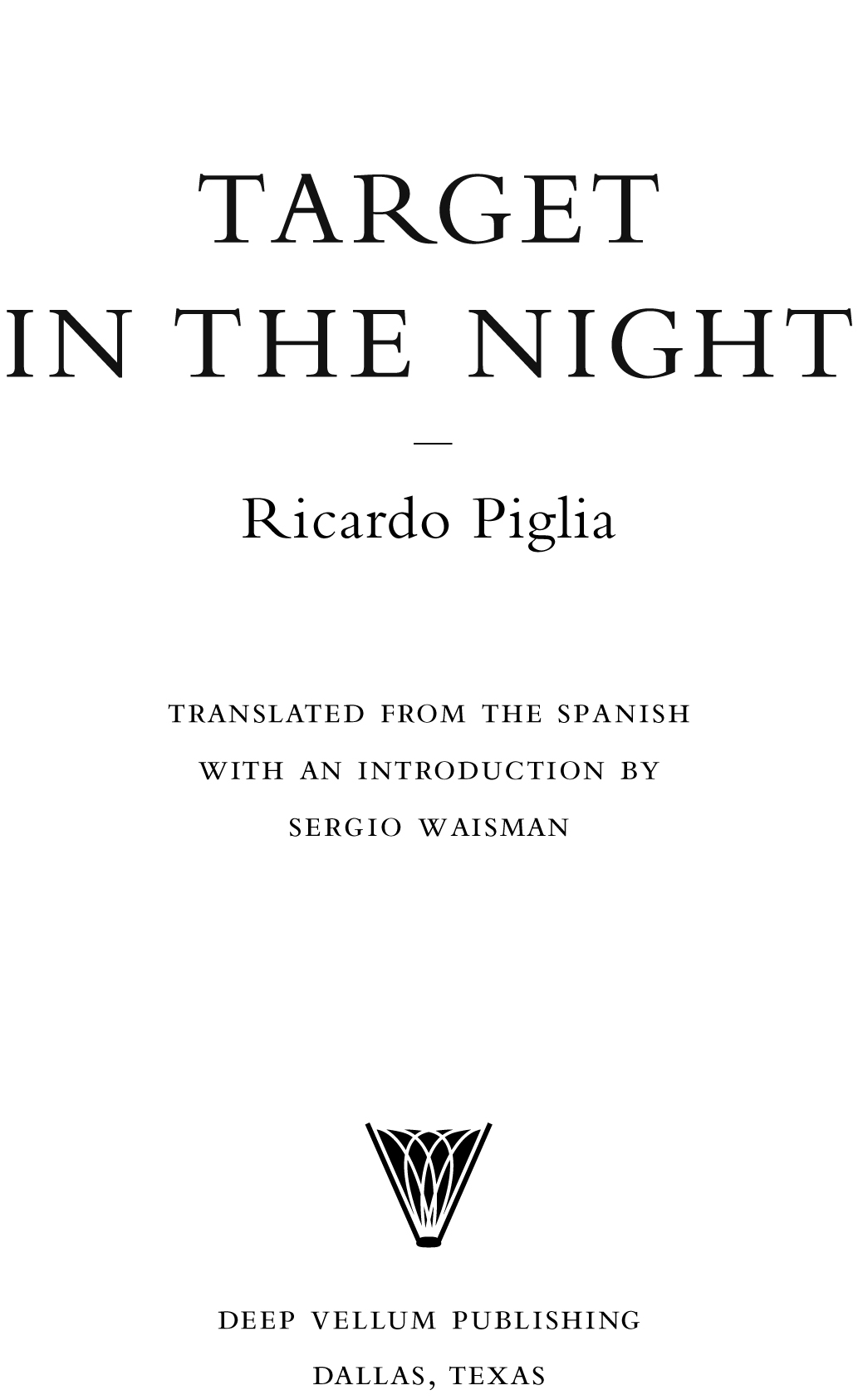 Deep Vellum Publishing is a 501C3

Work published within the framework of SUR Translation Support Program of the Ministry of Foreign Affairs, International Trade and Worship of the Argentinian Republic.

Text set in Bembo, a typeface modeled on typefaces cut by Francesco Griffo for Aldo Manuzio's printing of
De Aetna
in 1495 in Venice.

Experience is a dim lamp that only lights the one who bears it.

Ricardo Piglia was born in AdroguÃ©, in the Province of Buenos Aires, Argentina, in 1941. One of Latin America's most important living writers, Ricardo Piglia is known for his sophisticated combination of formal experimentation and political and cultural engagement. The author of fourteen books of fiction and non-fiction, Piglia's work has been translated, among others, into French, German, Italian, Dutch, Polish, Chinese, Arabic, Hungarian, and Portuguese, as well as English.
Target in the Night
was originally published in Spanish in 2010 as
Blanco nocturno
, and in 2011 it won the RÃ³mulo Gallegos Award and the National Critics Prize, two of the most prestigious awards given to a single work of Spanish-language literature in the world. In 2015, Ricardo Piglia was awarded the Formentor Prize, which recognizes a lifetime contribution to literature, previously awarded to Borges, Beckett, Bellow, and Gombrowicz, and most recently Fuentes, Goytisolo, MarÃ­as, and Vila-Matas.

Target in the Night
is a kind of literary thriller set in the pampas of Argentina. Tony DurÃ¡n, a Puerto Rican mulatto from New Jersey, arrives in a small town in the province of Buenos Aires with a suitcase full of American dollars. All indications are that DurÃ¡n comes in pursuit of two beautiful women, the Belladona sisters,
whom he met in Atlantic City, and with whom he formed a hasty trio. But the Belladona sisters may not have been the real, or at least not the only, reason for DurÃ¡n going to Argentina. A few weeks after DurÃ¡n's arrival in the small Argentine town, a murder ensues. Inspector Croce, the local, somewhat-rambling genius detective, investigates the crime. A writer from
El Mundo
, a newspaper in Buenos Aires, is sent to the remote area to cover the story; the journalist is Emilio Renzi, the author's well-known alter-ego figure, who appears in most of Piglia's fictions.

As
Target in the Night
unfolds, the investigations by Croceâand by Renziâuncover a series of hidden associations that lead to further inquiry. The story involves a powerful local family, a corrupt public prosecutor, and the relationships that Inspector Croce and the investigative journalist Renzi have and develop with the town residents. The initial enigma drives the narrative, and the different storylines in the novel all hinge around the initial crime. But there is also a larger mystery that lies as if hidden beneath the town and the text. The mystery at the heart of
Target in the Night
is an actual mystery and a pretext for the telling of a complex family storyâwhich turns out, in many ways, to be the story of Argentina.

Experimenting with form, innovating with narrative, recounting gripping tales that revolve around a central plot,
Target in the Night
starts as a detective novel, and soon turns into much more than that. Piglia takes the genre of the detective story and transforms it into what can be called, using Piglia's own term, “paranoid fiction.” Everyone in the novel is a suspect of a kind, everyone feels persecuted. In Piglia's paranoid fiction, individuals
are accused ofâand some commitâcrimes, but the category of a “criminal” no longer applies only to isolated individuals. Groups with power over other groups maneuver to conserve or gain more power through hidden as well as overt moves. No one understands what is happening, the clues and testimonies are contradictory, and suspicion is always in the air, because the versions of the story change with every point of view. As we follow Croce and Renzi through
Target in the Night
, the potentialâand the intrigueâof the story expand with the many voices interwoven throughout the narrative. Important in Piglia's book is the exploration of what is left unsaid, of what is hidden but cannot be forgotten. The initial crime is a point of departure for a series of unpredictable events and a fascinating inquiry into the machinations of society and storytelling in a small town in Argentina. Machinations that have everything to do with contemporary fictionâand with contemporary reality.

Ricardo Piglia's
Target in the Night
is deeply rooted in its nation's literary tradition, and in a certain RÃ­o de la Plata kind of Spanish (
castellano rioplatense
). The context of a small town in the pampas, the language used by the narrator and spoken by the characters in the novel, and the foundational importance of the Argentine countryside in the history of Argentine literature make translating
Target in the Night
a big challenge. At times,
Target in the Night
echoes some of the Argentine greats that came before Piglia: Macedonio FernÃ¡ndez, Jorge Luis Borges, Roberto Arlt, Manuel Puig, Rodolfo Walsh. At others, the novel resonates with Modernists like Joyce and Faulkner, Fitzgerald and Hemingway, Brecht
and Kafka, as well as the narrative worlds of Thomas Pynchon, Don DeLillo, and William Burroughs, or the hardboiled mysteries of Raymond Chandler and Dashiell Hammett. These are some of Piglia's influences in
Target in the Night
, crossed and reworked in a thoroughly original style in the remote Argentine landscape where the mystery takes place.