Read Television Can Blow Me Online

Television Can Blow Me 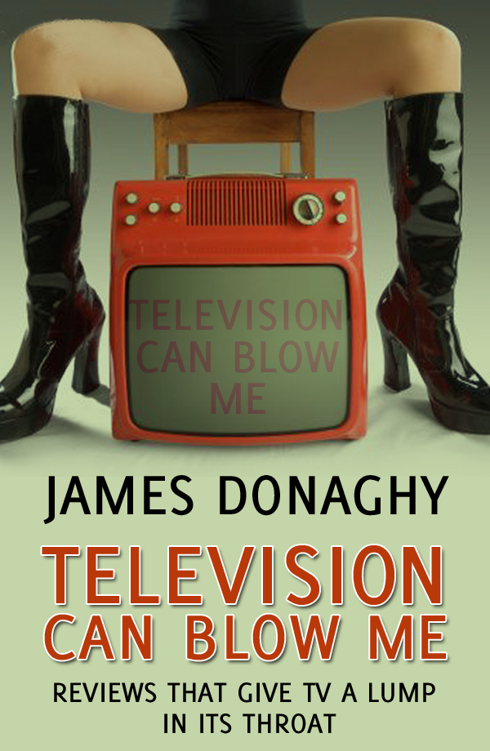 Television Can Blow Me

More hopelessly corrupt TV critics were spotted lunching with worthless TV talent Chernobyls than ever before in 2011 and the shamelessly compromised hacks who return half-cut to their soulless showhomes to write their fluff pieces before hour-long self-harm sessions under the ivory spooge of fluorescent strip lighting cut a sorry ass sight.

Television Can Blow Me is the antidote - the best of Aerial Telly. A man of jungle intensity and anthracite integrity fearlessly bringing it however, wherever, to whoever he likes.

James has been writing professionally about TV since 2006. He has written for the Guardian, Project, Front, House, Arena and Vanity Fair Italia. He lives and works in Birmingham.

A massive thank you to Mhairi McFarlane, Andy Conway and Justin Quirk and for reading through the text. Suggestions such as “hyphenate fuck face” were invaluable and have been implemented in full.

Cover by Peter Bradbury at Digit64.

When I started Aerial Telly in 2003 television review websites were a big pile of poop. Of course you had Television Without Pity with its snarky recaps and teeming forums but beyond that pickings among the one-man band blogs were decidedly turdly. There didn't seem to be anybody reacting to TV as if they had just watched it, still brain-fried by the brilliance or stupidity of what they had just seen.

For reasons I still can't fathom, every internet douche wanted to give a balanced report, take everything into account, stroke their chins and say “well that was a somewhat disappointing programme which nonetheless had some promising elements”.

They sounded like they were auditioning for a feature writing gig on their local paper. The writing was turgid, the views soporific and a decidedly pussy claat air of wanting to be everyone's mate prevailed. Wasn't the whole point of self-publishing to say what you like, not become a pale repetition of the party line?

I'd seen something similar with football fanzines. There was a time when they were a joy - subversive, profane, written on a shitty typewriter with half the keys missing, photocopied onto pink paper, packed with humour and they resembled something that you might find in a football fan's brain. Then When Saturday Comes came along and all a sudden everybody wanted to discuss formations, tactics and the Premier League’s finances. The sound of air slowly hissing out of a balloon could be heard. The squares had won.

So I wanted to do something that actually reflected how I felt about TV as a fan. Never knowingly reasonable or balanced - it would be a broadside, a polemic, a from-the-gut expression of how you feel in the immediate aftermath of a TV show. If you love it, it's the best thing in history; hate it, and everyone in the cast needs decapitating. Thus began Aerial Telly.

After an enjoyable few years dispensing bear hugs and bitch slaps, Arena magazine got in touch and offered me work. Soon afterwards The Guardian followed suit and I somehow found myself writing about TV for a living. Aerial Telly continued, twice-weekly as usual, talking the same smack it always had. It was a place I could say the things I couldn't say at grown-up publications like The Guardian where they have to worry about things like house style, relationships with TV networks and common decency. Aerial Telly, needless to say, never worries about any of that.

And now you hold in your digital hands the definitive digest of the eight inglorious years of Aerial Telly. Read it, cherish it and be aware that nothing you read is necessarily how it is but rather speaks a deeper truth of how I felt at the time.

In the end isn't that all any of us can do?

Sport on TV: pundits, commentaturds and their filthy lies

British drama: can you handle the Loof?

British comedy: the highs and lows and why it blows

Sci-fi: how the Cylons reinvented television

It's apparent to everyone that celebrities are worthless piece of shit who don't deserve to live but to say this is to miss the point. It's the very process of celebrity that degrades us all. It turns normals into craven idiots desperate for validation and turns celebrities into entitled shits, convinced that everything they do, say and think matters.

And we should pity them. Nobody treats them like a human being anymore. Otherwise decent withhold common courtesies, their private lives are picked over like a carcass by cruel buzzards and everyone thinks it's fine to laugh at their failings, misfortunes and stupid, stupid TV shows.

So this is me, pitying them - until they are ash.

Nigella Lawson was the worst columnist you ever read but stick her in a red top and blowsy skirt talking about her gravy and all of a sudden she's Madam Sex: Queen of Cock and Kitchen. Previously best known for having a famous granddad and marrying a foetus, Sophie Dahl now has her own cookery show The Delicious Miss Dahl which owes rather a lot to Lawson's sexy-posh-girl-in-the-kitchen trailblazing. Who knew the granddaughter of a best-selling author and daughter of a Chancellor of the Exchequer could succeed in the media?

Sophie puts it on the line early on. “I like honest, straightforward food” as opposed to all that dishonest slick talking food we've been eating all this time. It's a cute way of making a virtue out of necessity. She cooks simple because she's not that good at it. She's essentially saying “I can't cook but I am sexually attractive”. It's good that we get this out of the way so quickly.

The shows are mood based and the first is Shellfish, sorry,
Selfish
. “The perfect selfish day would have to begin with breakfast because it's my favourite meal” she says. Yes, and also because it's the first meal of the day, Sophs. The perfect “fucking your dwarf husband with a strap-on” day would also have to begin with breakfast. It's kind of a thing.

She goes to a cheese shop to get the perfect indulgent cheese for lunch. She finds buffalo mozzarella. “I actually fantasise about this cheese” she coyly confides. You may fantasise about it, doll, but you don't eat it. And in the remainder of your fantasies I imagine pink hearts, yellow moons, orange stars and green clovers play a central role.