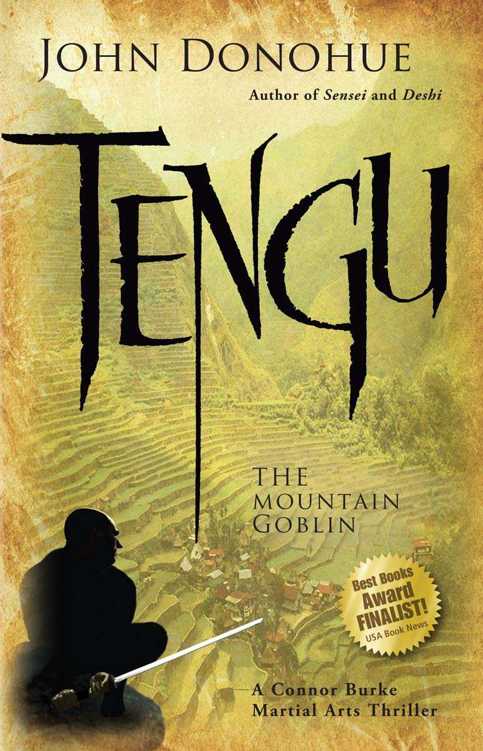 To my sisters and brothers
Patricia, Anne, Peter, Matthew, Mary, and Christopher:

First companions on the way.

A famous physicist once said that it’s impossible to examine the world objectively: The very act of looking disturbs the gossamer filaments that bind the universe together and, as a result, they vibrate with unanticipated harmonics. Our mere existence changes everything.

I have come to believe that this is so. I don’t think I could ever have anticipated the events that would have brought me somewhere far from my home, facing death beside the one person I most admired in the world. Looking back, it is as if we were drawn to that place by a chain that, for all its invisibility, was stronger than the steel of the sword that my master taught me to wield.

Our progress through this world sets the sea of molecules in motion. Like tide or wind, our very passage through the world creates unseen patterns in the fabric of life. They churn and swirl. Some fade away into quiet; others spawn into things of a size and monstrous intensity we could never imagine.

These, ultimately are the demons that haunt us. They are not some force from out there—they are creatures of our own making. They grow, sometimes without our awareness, spinning off into the darkness, until the day their orbit brings us once more into collision.

The old teachers were men alive to the currents that swirled around them. Human storm cells themselves, they churned through life with an intensity that de-stabilized the system. And they knew this. So they searched the darkness, aching to divine the pattern of the cyclones that moved, just beyond the limen of consciousness. The power they sensed was something to harness, something to defend against. Something to fear.

The
sensei
, students of both motion and stillness, know that the quest for mastery and control creates new currents, new powers, and new challenges.

These challenges become tests that some survive. But all too often, only the bystanders remain to tell the story.

Yet, the melancholy dignity they have passed on to those who follow in their footsteps is this: together, we can face the looming force in the darkness and not flinch.

The snow burned. It had fallen and frozen into granules overnight, an early dusting of white that hissed across rocks, coiling in the wind like a snake.

Higashi’s normally well-manicured hands were red and raw. He slipped as he scrambled across the stone bridge and cursed himself under his breath for being foolish enough to come out here. It was so unlike him to take the risk. He typically lived a life of tight control in a carefully constructed world of his own. But there was a fascination for him in actually seeing this subject, an intense fixation on this man, because Higashi’s discovery of him was important in ways no one else had suspected. Now his city shoes gave him no purchase on the icy patches, smooth and uncaring, of the pathway. He could feel the cold working through the thin soles, drawing the warmth from his feet, making him clumsy.

He was not a field agent. He spent his days reviewing logs of phone and e-mail intercepts, a vast blizzard of paper spewed out by the intelligence service’s computers. He sifted through fragments of conversations; small pieces of life caught and held up for inspection, pulsing with ghostly implications. Higashi’s brain stored and dissected facts, seeking the threads of a connecting web so faint and fine that too heavy a touch could snap it. And when he twisted and turned the data, playing the light just so, a pattern was sometimes revealed. Then, alone in his analyst’s cubicle, he would sigh. When he did, the noise of satisfaction, so loud in the hushed scrubbed air of the office, made him glance about guiltily, afraid that his small expression of triumph would be enough to make the web dance with alarm.

Usually he moved slowly, with the cool circumspection of a man who lived most vividly in his head. But, as a man whose subjects were typically beyond Japan’s borders, he also grew obsessed with the possibility of this time seeing the suspect with his own eyes.

But there was more to this ambition than he cared to admit. His life was spent working tiny shards of information, hint and innuendo, teasing them into some sort of meaning, a mosaic of blurred boundaries and indeterminate shapes. His father, while he had lived, had hoped for a son who could do more. The old samurai adage that to know and to act were one and the same thing rang through Higashi’s childhood. His father, who had early detected a dreamy remoteness in his son, hoped that the rigorous training of the judo
dojo
would pound some sense into the boy.

Even years later, Higashi would shudder involuntarily at the memories of body heat and the scent of sweat, the sound of bodies being pounded flat. It was a world of danger, where people came at you with moves as unpredictable as they were unrelenting. Higashi dreaded it. His father, on the other hand, was a short, squat man in a worn
gi
, who would shuffle onto the tatami mat with the subdued swagger of a man at home in a brutal element. He could not understand his son, and the young Higashi realized with a sinking feeling that he could never meet the expectations of his sire.

The slight and hesitant Higashi was easy prey for the other boys in the class. He went through the motions, learned the moves, but was never able to marshal the fierce, tight explosion of effort that led to success on the judo mats. And in Japan, the nail that sticks up gets banged down. Higashi’s time in the judo
dojo
became an exercise in futility and humiliation. Eventually, even his father came to realize it. Higashi never forgot the ill-concealed look of disappointment on his father’s face.

Higashi worked hard to compensate. His obvious intelligence permitted him to distinguish himself in his studies. If his father could never quite fathom his bookish son, he could at least take pride in his academic success. But Higashi’s penchant for living in his head often made him tone deaf to the nuance of social relations that were so important in getting ahead in corporate Japan. Eventually, and only through his father’s connections, he landed a job as an analyst in the security agency.

And now he was on the cusp of being able to discover something remarkable. It was rare that the pieces all fit together, and he yearned to see it with his own eyes. It was a validation of his skill and an opportunity to prove himself. It was something that all the field agents had missed. All the young, tough men who had the same confident swagger as his father. The compelling reason that had ultimately spurred him to leave the safety of his desk was bigger than ambition, more potent than intellectual curiosity. All too often it was the operations agents, not the analysts, who got the credit. In their dismissive attitude toward the analysts, Higashi relived his childhood humiliation. He burned with resentment that he could never be like them, and yet hungered for their recognition. Now, he believed this one safe sojourn into the field would show them—show them all—that he was worth their respect.

Higashi didn’t breathe a word of his plans to anyone.

The notice of a special Winter Training event—a
Kangeiko
— was flashed across Higashi’s computer screen by the customized search protocol he’d written. Special winter training was common in January and February all over Japan. Martial artists in white uniforms would practice barefoot in the snow, faces ruddy in the wind and bodies steaming with effort. The very thought of it made Higashi shudder. He was not a man accustomed to extremes. But this special event’s listing held a name that ultimately pulled him out of the office, onto the train, and into the wooded hills of a rural temple.

The grounds of the temple should have been soothing to someone like Higashi. They were rustic, yet orderly. A weathered
torii
marked the entrance to the precincts. Traditional wooden buildings were set among the trees and a large flagstoned plaza was cradled in the bowl created by surrounding hills. The wind whipped through the gray tree branches. Pines clung to the slopes, dark blotches against the frosty hues of winter.

He had shuffled into the temple grounds with the small crowd of spectators to watch the demonstration of the ko-ryu, the old styles of martial arts. Higashi was nondescript: slight, with his belly starting to swell into the soft middle age of a desk man. His clothes were respectable, but worn looking, his black hair shaggy and unkempt. His small hands were clean and the nails kept fastidiously short. He was a man out of his element. But he wasn’t there because of his affinity for the martial arts. Far from it, he was there to put a face to the name of the man he had studied in secret for so long.

Higashi edged closer to the ropes that separated the crowd from the martial arts masters, mouth slightly open with the effort of solidifying the essence of what he knew into the person who stood before him. A lumpy form, bundled in the traditional clothes of old Japan, Higashi’s subject was surprisingly agile for a man his age. Higashi saw the man’s focused expression, the force of breath that pushed, steam-like into the air, and the whir and snap of ancient swordplay as the old master went through his routine.