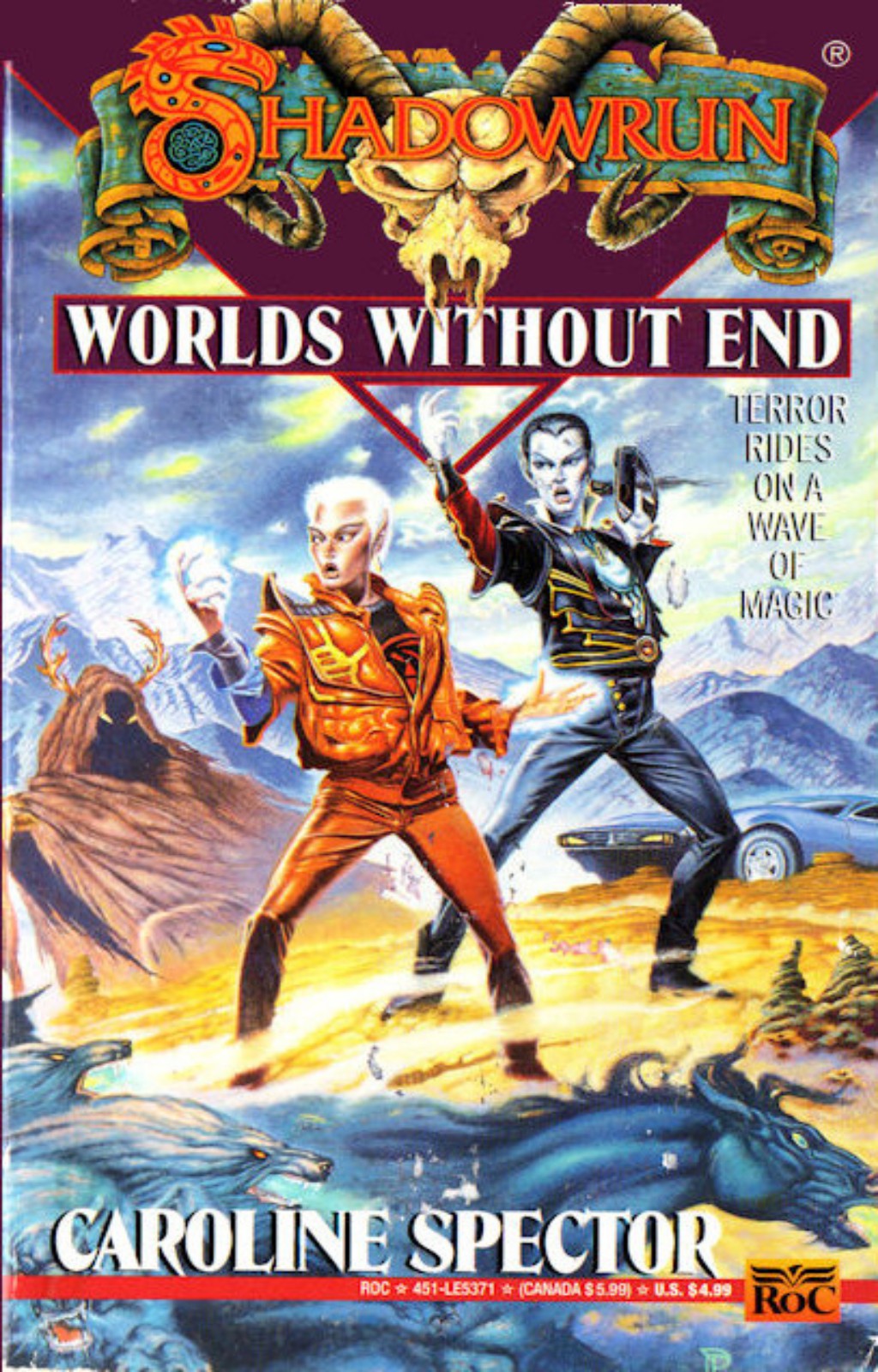 Aina remembers the world of centuries ago—she was there.

Now she’s here in the Awakened era of shadowrunners and simulations, magic and metas.

And she may have brought an old nemesis along with her....

This new evil is as ancient and powerful as time. It does not bend before assassins, megacorps, shamans, or dragons. Aina, Harlequin, and their fellow immortal elves might have the power to stop it. . .but will she be able to convince them to join the battle before it’s too late?

THE WIND HOWLED ACROSS

the open fields and whistled through the tombs. In the distance, I could hear the thundering of hooves.

The magic trembled in me, flew around me, pulled at the world, and drew what I would from it. We stood and chanted the old words, words of power, until our voices grew hoarse and our throats were raw. At last we stopped.

Abruptly, the air was still and silent. I released Caimbeul’s hand and turned. Below us, at the base of the hill where the cairns stood, was the Hunt.

Black fur melted into black night. At their head was a tall, cloaked form. A long, bony arm appeared from the depths of the apparition’s cloak. I glanced at Caimbeul. His lips were set in a hard line.

There has always been magic. And magic has a life of its own. It comes and goes without our control. It flows through the world as it will.

This is how the world was Awakened.

Magical energy ran through the veins of the world like blood through humans. It changed her. And it changed her people.

And it came to pass that events shaped by magic began to alter history.

Earthquakes tore the earth apart. The Four Horsemen of the Apocalypse seemed to be riding across the world. Conquest, War, Famine, and Death raged unabated. The VITAS plague alone took almost a quarter of the world’s population in the year 2010.

And then there were the children.

At first, they were called deformities. Then mutations. The superstitious called them changelings, and saw the Hand of God at play. Finally, science offered a label: UGE. Unexplained Genetic Expression. Everywhere you looked the media ran stories about these babies, calling them elves and dwarfs. The age-old specter of prejudice had found new victims.

At the end of 2011, the most dramatic event of the newly Awakened world occurred. The great worm, Ryumyo, rose from his long sleep inside Mt. Fuji. Thousands watched as the first dragon the technological world had seen took to the sky. In dragon fashion he ignored humans. Humanity got its first close-up look at a dragon when Dunkelzahn consented to a series of trideo interviews. The ratings were fantastic and launched Dunkelzahn as an international celebrity.

In 2014, The Native American Nations claimed responsibility for the eruption of Redondo Peak. This cataclysmic event buried nearby Los Alamos in volcanic ash. In a desperate measure to assert control, the United States government sent federal agents in to stop the NAN uprising. They were swept into oblivion by tornadoes resulting from the powerful shamanistic magic of the Great Ghost Dance.

After this, the changes in the world began to
happen at a faster and faster pace. There was the so
-called goblinization of 2021. Overnight, people began to change into fantastic creatures once thought to exist only in fairy tales. The stuff of legend.

And buried deep within the Awakening was a mystery from the past.

A time so far away from present events that only a handful of people knew the truth.

About how the world once was. And how it might become again.

When magic was as much a part of life as breathing, or eating, or seeing, or feeling. And how the world was made full of heroes and troubadours, and mages, and wild things the modern world could not fathom. And how the very magic that flowed through this world also drew the greatest evil to it.

And when that evil came for the people, one great race understood the futility of fighting this new plague upon the land. The Theran Empire promised a way to survive the hundreds of years this Scourge would last. They sent the people of the world into deep underground kaers where they would live magically sealed against the invaders until the time when they could come back to the surface again.

But such generosity of vision always has its price.

However, that is another story.

And now we have come back again to the magic. And to those who would guard the world from the horrors of the past.

Those who have lived through it all before.

Once upon a time there was a woman.

There are more names for her.

It all depends on who’s telling the story.

At any rate, at one time everything in the world was wonderful. Or so you’re supposed to believe. There was enough food for everyone to eat. Enough water to drink. No one had to work.

Except for one thing.

You see, in this story she’s at the root of all the trouble.

Either she can’t help opening the box. Or talking to the snake. Or she’s just too uppity for her own good.

And she starts poking around in things. Things We Were Not Meant to Know. And as a result, everything goes to hell in a handbasket.

Or so the person telling the tale would have you believe.

Of course, since everything in the world isn’t total drek, there has to be some sort of mitigating factor.

Like we’re banished from the garden. But, if we work and pray hard enough, we might be let back in. Or we’re told that the woman was banished to the edge of time and there she mated with demons. And her offspring come to us in our dreams and torment us.

And then, in some versions of the tale, at the bottom of the box is Hope. Which, we’re told, is the only way to survive all the other horrors which have already escaped from the box. It is the only thing we have to hold on to.

Or so we’re told.

But that’s the way it is with stories.

You just don’t know who you can trust.

“Oh fuck, not another elf!”

—Hugo Dyson, during the reading of a manuscript by J.R.R. Tolkien

Across the frozen planes of time I’ve come. Through fires brighter than a thousand suns. Through darkness. Through the Void. Over the range of the universe I’ve come.

I’ve come for you, Aina.

To take you again into my sweet embrace and show you wonders from the darkness of your soul. Then I’ll make you yearn for death while I rip open your mind and lay waste to everything you hold dear.

But all that will come later. For we have centuries, no, millennia to play our games. Come to me now and let me show you . . . let me show everything I have to offer.

And when I awoke, the stench of death and corruption still lingered in the air.

Through my bedroom window moonlight poured cold and blue. I rubbed my eyes, trying to convince myseif that it had only been a dream. That the demons lurking in the shadowed corners were in my imagination. A conjuring of my mind only.

I shoved the covers away, letting the night air send gooseflesh across my arms and down my legs. Here by the sea on the northern coast of Scotland the weather stays chill and damp all year long. It had never bothered me before. But tonight, I felt the cold straight to my bones.
All the better to keep me awake,
I thought.

My feet shrank as they touched the cold bare floor. Grabbing my thick robe, I wrapped it tightly about me. It was made of real, heavy, woven cashmere fabric, not that horrid synth stuff they sell nowadays.

I went downstairs and made myself some tea. It warmed my body, but I still felt chilled. I wanted to read, but I hated using the foul contraption Caimbeul had given me. The vidscreen gave me a headache and I could never bring myself to have cyberware implanted. Bodmod, cyberjunk, tickle-wires—whatever they’re calling them this week.

Hadn’t I done enough of that sort of thing to myself in the past?

I shuddered as I thought about Ysrthgrathe.

Too soon,
I thought.
It’s too soon.

But I knew it wasn’t. The very thing I’d sought to prevent seemed to be happening. That is, if dreams could be trusted.

I dumped the tea into the sink and went and pulled a bottle of scotch from the pantry and splashed a hefty portion into a tumbler. It burned going down and brought tears to my eyes. I suppose the elves in Tír na nÓg would be offended at my traitorous choice of beverage, but frag them. I hadn’t been on speaking terms with either Tir for quite some time.

But what to do about the dreams?

Perhaps the shamans in NAN would be willing to listen. But then I remembered the dustup we’d had before the Great Ghost Dance. They hadn’t been too happy to hear my predictions about the magical fallout from all the blood they’d planned to spill.

Idiots. If only they’d listened. I suspected then that this would be the result. Like bees to honey, it would draw the creatures again. And we’d had no time to plan. To prepare. This time the monsters from the past would lay waste to the whole world.

Are you waiting for me?

Have you been waiting for me?

Does your flesh crave my caress?

Do you remember? Remember the centuries of pain and humiliation?

Do you know how I have missed you?

The sound of his voice echoed inside me.

I went to the thermostat and pushed it up. To hell with the regs about fuel waste, I thought. A century ago, Caimbeul had given me a Renoir. I liked to look at it when I felt like this. Afraid and lonely in the dark hours before dawn when the past spreads before me like a black spill of ink.

I flicked my hand and the illusionary wall I’d created long ago vanished. It was a simple enough spell, though in the past few centuries there’d been little enough magic to go around.

The last few years—a human life span—just a drop to me—had seen such a burst of magical energy and growth. The Awakening, they called it on their ugly little trids. Oh, I know Dunkelzahn found this brave new world far too fascinating, but he’d been dreaming for more than five thousand years. What would he know of it? He hadn’t seen what the world had become.

Escape to Morning by Susan May Warren
The Map Maker's Quest by Matthew J. Krengel
Smart, Sexy and Secretive by Tammy Falkner
The Sum of Her Parts by Alan Dean Foster
Gunpowder Chowder by Cole, Lyndsey
The Sisterhood by Helen Bryan
Cold Case by Linda Barnes
Almost An Angel by Judith Arnold
The Promise of Love by Billi Jean
Holder of Lightning by S. L. Farrell
Our partner