Read Testament of Youth: An Autobiographical Study of the Years 1900-1925 Online

Testament of Youth: An Autobiographical Study of the Years 1900-1925 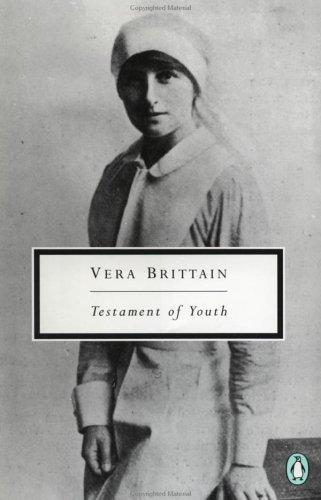 Chapter 8 - Between the Sandhills and the Sea

This edition published by Weidenfeld & Nicolson in 2009

All rights reserved. No part of this publication may be reproduced, stored in a retrieval system, or transmitted, in any form or by any means, electronic, mechanical, photocopying, recording or otherwise, without the prior permission of both the copyright owner and the above publisher.

The right of Vera Brittain to be identified as the author of this work has been asserted in accordance with the Copyright, Designs and Patents Act 1988.

This ebook produced by Jouve, France

‘And some there be, which have no memorial; who are
perished, as though they had never been; and are
become as though they had never been born; and their
children after them. But these were merciful men, whose
righteousness hath not been forgotten . . . Their bodies
are buried in peace; but their name liveth for evermore.
The people will tell of their wisdom, and the
congregation will shew forth their praise.’ 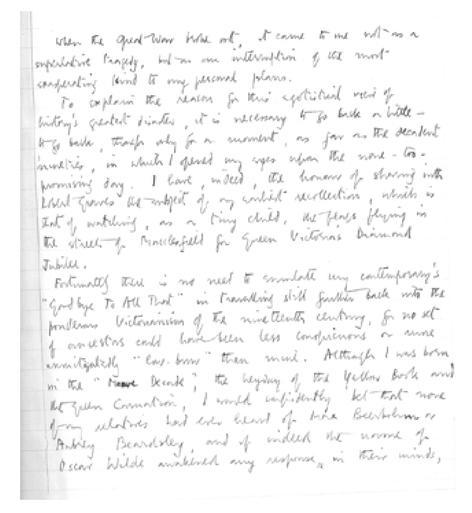 The opening page of chapter 1 from the holograph manuscript of
Testament of Youth
(William Ready Division of Archives and Research
Collections, McMaster University Library, Hamilton, Canada)

On 28 August 1933,
Testament of Youth
, Vera Brittain’s classic memoir of the cataclysmic effect of the First World War on her generation, was published by Gollancz to a generally enthusiastic reception and brisk sales. ‘Oh what a head-cracking week . . .’, Brittain recorded in her diary, after reading the early reviews. ‘Never did I imagine that the
Testament
would inspire such praise at such length, or provoke - in smaller doses - so much abuse.’
1
Lavish praise came from, among others, Rebecca West, Pamela Hinkson, Compton Mackenzie and John Brophy while, in the
Sunday Times
, Storm Jameson commented that ‘Miss Brittain has written a book which stands alone among books written by women about the war’.
2
By the close of publication day,
Testament of Youth
had sold out its first printing of 3,000 copies, and was well on its way to becoming a bestseller. In Britain, up to the outbreak of the Second World War, it would sell 120,000 copies in twelve impressions. In the United States, where Macmillan published the book in October, and where Brittain was feted on a triumphant lecture-tour in the autumn of 1934, it enjoyed similar success. ‘Of all the personal narratives covering the World War period’, wrote R. L. Duffus in the
New York Times
, ‘there can surely have been none more honest, more revealing . . . or more heartbreakingly beautiful than this of Vera Brittain’s.’
3

Several of the original reviewers, though, were unnerved by the autobiography’s frankness. James Agate struck a blow for misogyny when he wrote that it reminded him of a woman crying in the street. However, in her diary, Virginia Woolf expressed the more widespread response. Although she mocked Brittain’s story - ‘how she lost lover and brother, and dabbled hands in entrails, and was forever seeing the dead, and eating scraps, and sitting five on one WC’
4
- she admitted that the book kept her out of bed until she had finished reading it, and later wrote to Brittain about how much
Testament of Youth
had interested her.
5
Woolf’s interest in the connections that Brittain had ‘lit up’ for her between feminism and pacifism would leave its mark on the novel she was then writing that would eventually become
The Years
, and even more decisively on the radical analysis of
Three Guineas
.
6

For Vera Brittain, the publication of
Testament of Youth
represented the crossing of a personal Rubicon. Approaching forty, she had at last passed from relative obscurity to the literary fame she had dreamed about since childhood, when as a girl she had written five ‘novels’ on waste-cuts from her father’s paper-mill. In the process she had exorcised her ‘brutal, poignant, insistent memories’
7
of the war, releasing her deeply felt obligations to her war dead: her fiancé Roland Leighton, shot and fatally wounded at Christmas 1915; her brother Edward, killed in action on the Italian front just months before the Armistice; and her two closest male friends, Victor Richardson, shot through the head and blinded at Arras, who survived for a matter of weeks until June 1917, and Geoffrey Thurlow, killed in an attack on the Scarpe earlier that spring.

Brittain had been attempting to write about her experiences of the war, during which she had served as a Voluntary Aid Detachment (VAD) nurse in military hospitals in London, Malta, and close to the front line in France, for more than a decade. In 1922 she had selected and typed sections of the diary she had kept from 1913-1917, and submitted it for a prize offered by a firm of publishers for a personal diary or autobiography.
8
It was not chosen, and in the course of the next few years she struggled with several unsuccessful attempts to write her war book as fiction. Having finally settled on the autobiographical form, with the intention of making her story ‘as truthful as history, but as readable as fiction’,
9
she subsequently found her progress on the book impeded by all manner of domestic interruptions and tensions. Within weeks of beginning
Testament of Youth
, in November 1929, Brittain had unexpectedly discovered that she was pregnant with her second child, her daughter Shirley, born the following summer. In 1931, a year after Shirley’s birth, she wrote to her friend Winifred Holtby: ‘My “Testament of Youth”, if only I get the time . . . to do it properly, might be a great book. It is boiling in my mind and I shall become hysterical if I am prevented from getting down to it very much longer . . . If I am to continue sane I
must
have . . . a) rest from the children & house and b) freedom and suitable circumstances to continue my book’.
10

By the middle of February 1933, she had completed her manuscript, but other problems soon became apparent. In the final stages leading to publication, she was confronted by the strong objections of her husband, the political scientist George Catlin, to his own appearance in the book’s last chapter. Catlin scrawled his comments in the margins of the typescript: ‘intolerable’, ‘horrible’, ‘pretty terrible’.
11
Believing that his wife’s book would hold him up to ridicule among his academic colleagues - not least, one suspects, because of the account of the continuing importance to her of her intimate friendship with Winifred Holtby - he begged Brittain to make changes to certain passages, and prayed that ‘this spotlight’ would pass swiftly.
12
She complied by reducing him to a more shadowy figure in the final draft, though she bitterly regretted that the theme of her post-war resurrection, symbolised by her marriage, had been irretrievably weakened.

Testament of Youth
underwent its own remarkable resurgence in the late seventies, almost a decade after Brittain’s death. Brittain had been heartened by the assessment of Oliver Edwards (nom de plume of Sir William Haley) in
The Times
in 1964, the year of the fiftieth anniversary of the outbreak of the First World War, that
Testament of Youth
was ‘the real war book of the women of England’.
13
However, she had believed in her final years that as a writer she was largely forgotten, and that any future interest in
Testament of Youth
would be of only a minor kind. She would certainly have been surprised by the extent of the book’s renewed success after it was reissued in 1978 by a feminist publishing house and adapted as a landmark BBC TV drama. Carmen Callil, head of the nascent Virago Press, found herself weeping while reading it on holiday in her native Australia, and back home propelled the book once more to the top of the bestseller lists; while the five-part television adaptation in 1979, with a luminous performance by Cheryl Campbell in the central role, and an intelligent script by Elaine Morgan, introduced Brittain’s story to a wider audience than ever before. It has never been out of print since.

Today,
Testament of Youth
is firmly enshrined in the canon of the literature of the First World War. It remains the most eloquent and moving expression of the suffering and bereavement inflicted by the 1914-18 conflict, as well as offering generally reliable testimony of a VAD serving with the British army overseas,
14
together with a host of other aspects of the social conditions of the war as experienced by the English middle-classes. Furthermore, in writing her autobiography - or ‘autobiographical study’ as she preferred to call it - Vera Brittain was also contributing a chapter to the wider history of women’s emancipation in England. It has sometimes been overlooked that a little more than a third of
Testament of Youth
is concerned with Brittain’s account of her wartime experiences. Two chapters of almost a hundred pages precede the beginning of her narrative of the war, which describe Brittain’s attempts to escape the living death of her provincial young ladyhood and her personal struggles for education. Rebecca West saw this as ‘an interesting piece of social history, in its picture of the peculiarly unsatisfying position of women in England before the war’.
15
And in the book’s final section, after the declaration of the Armistice in November 1918, and following the granting of the vote to women over thirty in February of that year (an event that passed unnoticed by Brittain at the time because of her absorption in her work as a nurse in France),
Testament of Youth
returns to feminist themes: to Brittain’s post-war involvement in equal-rights feminism, to her working partnership with her great friend Winifred Holtby and, finally, to her engagement to a survivor of the war generation, and the promise of a marriage that will be defined in feminist terms.