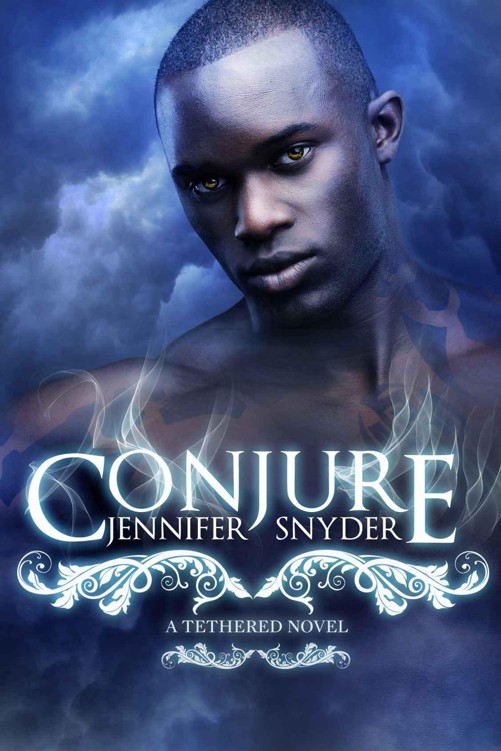 Cover design by © Regina Wamba from
Mae I Design

Discover other titles by Jennifer Snyder at
Amazon

Chapter Two – Ripples in the Landscape

Chapter Eight – Under My Skin

Chapter Nineteen – Drowned In a Past Life

Chapter Thirty-One – My Lips Were On Fire

it’s because of you that I keep moving forward on this epic journey of mine.
.

A cool breeze whipped at my exposed skin as I stood at the edge of the cliff, staring after Theo’s retreating form. My limbs trembled from both exhaustion and the frigid breeze that had sprung from nowhere and everywhere all at once.

Tethered
, what did that even mean?

Theo was nearly out of sight now. All I could see was the whiteness of his T-shirt glowing through the night; the tree limbs and brush were about to swallow him whole. My stomach grew rock hard as I thought about following after him and demanding to know what all of this meant, how it was all possible. Theo shouldn’t be able to wield any type of power according to Kace, and yet he had—he’d saved me with his power of Air.

My feet moved forward as I noticed Theo had disappeared from my line of vision completely.

Knots formed in the pit of my stomach the closer I came to him. He wasn’t the type you demanded answers from. I knew this about him without really knowing him at all.

“Why are you following me like a lost puppy?” His voice was rich and raw as it floated through the night to my ears.

“I…I need to know what happened back there, how you were able to use Air magick,” I said in a strained voice as I hurried to his side. “I need to understand what being tethered to you means.” Even I could hear the pleading tone in my voice as I squeaked out the words.

He turned to glance at me, and in the darkness surrounding us, all I could see were the whites of his eyes. But it was what I could feel that surprised me. Warmth. The same warmth I always felt when Kace touched me slipped over my body as though I could feel the trail his eyes had taken when he’d looked at me.

“It’s complicated,” he muttered, barely above a whisper.

“Just…tell me, please,” I begged, my voice taking on a panicked, unsteady tone I didn’t care to use in his presence. “How are you able to use magick like that?”

We’d been walking down the dirt road and had come to his dark truck parked off to the side. I didn’t know why he’d parked so far from the cliff, but I wasn’t about to ask either. The chilly wind that had whipped at me near the cliff was now gone. This left me wondering if it had been Theo at all; maybe it had just been the natural breeze from the ocean. Either that or he’d calmed down enough now to control his powers. I hoped for the latter.

“I’m not like you; I’m a little known, well-kept secret,” Theo said, pausing at the bed of his truck. He reached into the chrome toolbox, which glistened in the sliver of moonlight above us, and pulled out a cloth bag. He placed all the grimy roots he’d been holding inside of it and tossed it back in the toolbox. “I didn’t have to wait to be initiated; my Hoodoo side allows me to use my elemental magick whenever I choose. Which, by the way, shouldn’t you be thanking me instead of interrogating me?” His head cocked to the side as he asked the question, and my heart sped up.

In the glimmer of light reflected off the chrome toolbox, I could make out his profile—his solid profile with chiseled features and plump, kissable lips. A slight thrill of alarm jolted through me at my thoughts.

“Umm, thanks…” My voice sounded strange even to my own ears. There was something compelling about being in Theo’s presence. It scared me and enticed me all at once.

I mentally went over the knowledge he’d just dumped on me: his Hoodoo powers allowed him to use his elemental magick whenever he wanted.

Now that I was tethered to him, did this notion also work for me?

“So, does that mean my magick will work now, too?” I asked timidly, feeling stupid the moment the words passed from my lips.

“No,” he said flatly. He stalked to the driver’s side door of his truck and swung it open. A loud creak from the door echoed through the night from the rusty hinges and made me jump.

“Well…what about being tethered? What does that mean?” I asked, watching him climb into the truck without a second glance my way.

“I don’t know why we’re tethered together. It’s something we’ll have to figure out,” he said, staring straight ahead.

His solid, dark arm reached past me for the door handle, and I stepped out of the way so he could close it. I noticed how he didn’t waste any time in starting the engine of his ancient truck to get away from me. Before I could speak another word, Theo was backing up and driving away.

Tokio Whip by Arturo Silva
You Must Like Cricket? by Soumya Bhattacharya
Chloe by Michelle Horst
Ambush at Shadow Valley by Ralph Cotton
The Assassin and the Underworld by Sarah J. Maas
Wolf Point by Edward Falco
Buffalo Jump by Howard Shrier
PacksBrokenHeart by Gwen Campbell
A Fire Upon the Deep by Vernor Vinge
The New Mammoth Book of Pulp Fiction by Maxim Jakubowski
Our partner