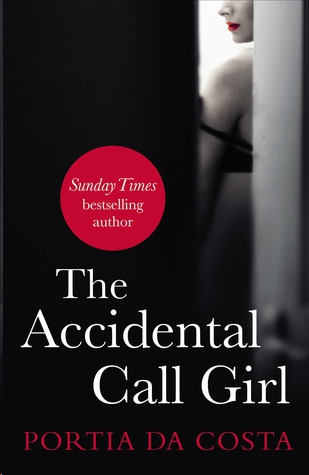 4  Devil in the Dark

12  Come into the Garden

When Lizzie meets an attractive older man in the bar ofa luxury hotel, he mistakes her for a high class call girl on the look-out for a wealthy client.

With a man she can’t resist...

Lizzie finds herself following him to his hotel room for an unforgettable night where she learns the pleasures of submitting to the hands of a master. But what will happen when John discovers that Lizzie is far more than she seems...?

Part One of the ‘Accidental’ Trilogy.

Portia Da Costa is one of the most internationally renowned authors of erotica.

She is the author of
Continuum
,
Entertaining Mr Stone
,
Gemini Heat
,
Gothic Blue
,
Gothic Heat
,
Hotbed, In Too Deep
,
Kiss it Better
,
Shadowplay
,
Suite Seventeen
,
The Devil Inside
,
The Stranger
and
The Tutor
, as well as being a contributing author to a number of Black Lace short-story collections.

He looked like a god, the man sitting at the end of the bar did. Really. The glow from the down-lighter just above him made his blond hair look like a halo, and it was the most breath-taking effect. Lizzie just couldn’t stop staring.

Oops, oh no, he suddenly looked her way. Unable to face his sharp eyes, she focused on her glass. It contained tonic, a bit dull really, but safe. She’d done some mad things in her time, both under the influence and sober, and she was alone now, and squarely in the ‘mad things’ zone. She’d felt like a fish out of water at the birthday party she was supposed to be at in the Waverley Grange Hotel’s function room with her house-mates Brent and Shelley and a few other friends. It was for a vaguely posh girl who she didn’t really know that well; someone in her year at uni, who she couldn’t actually remember being all that pally with at the time. Surrounded by women who seemed to be looking at her and wondering why she was there, and men giving her the eye with a view to chatting her up, Lizzie had snuck out of the party and wandered into the bar, drawn by its strangely unsettling yet latent with ‘something’ atmosphere.

To look again or not to look again, that was the question. She wanted to. The man was so very hot, although not her usual type. Whatever
that
was. Slowly, slowly, she turned her head a few centimetres, straining her eyes in order to see the god, or angel guy, out of their corners.

Fuck! Damn! He wasn’t looking now. He was chatting to the barman, favouring him with a killer smile, almost as if he fancied
him
, not any of the women at the bar. Was he gay? It didn’t really matter, though, did it? She was only supposed to be enjoying the view, after all, and he really was a sight for sore eyes.

With his attention momentarily distracted, she grabbed a feast of him.

Not young, definitely. Possibly forty, maybe a bit more? Dark gold-blond, curling hair, thick and a bit longer than one would have expected for his age, but not straggling. Gorgeous face, even though his features, in analysis, could almost have been called average. Put together, however, there was something extra, something indefinable about him that induced a ‘wow’. Perhaps it was his eyes? They were very bright, and very piercing. Yes, it
was
the eyes, probably. Even from a distance, Lizzie could tell they were a clear, beautiful, almost jewel-like blue.

Or maybe it was his mouth too? His lips were mobile, and they had a plush, almost sumptuous look to them that could have looked ambiguous on a man, but somehow not on him. The smile he gave the lucky barman was almost sunny, and when he suddenly snagged his lower lip between his teeth, something went ‘Oof!’ in Lizzie’s mid-section. And lower down too.

Hard to tell, with the curve of the bar, and other people
sitting between them, but if his general demeanour and the elegant shape of his hand as he lifted his glass to his lips were anything to go by, he was lean and fit. But, that could be wishful thinking, she admitted. He might actually be some podgy middle-aged guy who just happened to have a fallen angel’s face and a very well-cut suit.

Just enjoy the bits you can see, you fool. That’s all you’ll ever get to look at. You’re not here on the pull.

With that, as if he’d heard her thoughts, Fallen Angel snapped his head around and looked directly at her. No pretence, no hesitation, he stared her down, his eyes frank and intent, his velvet lips curved in a tricky, subtle quirk of a smile. As if showcasing himself, he shifted slightly on his stool, and she was able to see a little more of him.

She’d been exactly right. He
was
lean and fit, and the sleek way his clothes hung on him clearly suggested how he might look when those clothes were flung haphazardly on the floor.

The temptation to look away was like a living force, as if she were staring at the sun and its brilliance was a fatal peril. But Lizzie resisted the craven urge, and held his gaze. She didn’t yield a smile. She just tried to eyeball him as challengingly as he was doing her, and her reward was more of that sun on the lips and in the eyes, and a little nod of acknowledgement.

The voice from just inches away nearly made her fall off her stool. She actually teetered a bit, cursing inside as she dragged her attention from the blue-eyed devil-angel at the end of the bar to the rather toothsome young barman standing right in front of her.

There was no need to ask who’d sent the drink that had been placed before her, in a plain low glass, set on a white napkin. It was about an inch and a half of clear fluid, no ice, no lemon, no nothing. Just what she realised
he
was drinking.

She stared at it as the barman retreated, smiling to himself. He must go through this dance about a million times every evening in a busy, softly lit bar like this. With its faintly recherché ambience it was the ideal venue for advances and retreats, games of ‘Do you dare?’ over glasses of fluids various.

What the hell was that stuff? Lighter fluid? Drain cleaner? A poisoned chalice?

She put it to her lips and took a hit, catching her breath. It was neat gin, not the vodka she’d half expected. It seemed a weird drink for a man, but perhaps he was a weird man? Taking a very cautious sip this time, she placed the glass back carefully and turned towards him.

Of course, he was watching, and he did a thing with his sandy eyebrows that seemed to ask if she liked his gift. Lizzie wasn’t sure that she did, but she nodded at him, took up the glass again and toasted him.

The dazzling grin gained yet more wattage, and he matched the toast. Then, with another elegant piece of body language, a tilt of the head, and a lift of the shoulders, he indicated she should join him. More blatantly, he patted an empty stool beside him.

Here, Rover! Just like an alpha dog, he was summoning a bitch to his side.

Before she could stop herself, or even really think what she was doing, Lizzie mirrored his little pantomime.

There was an infinitesimal pause. The man’s exceptional eyes widened, and she saw surprise and admiration. Then he slid gracefully off his stool, caught up his drink and headed her way.

Oh God, now what have I done?

She’d come in here, away from the party, primarily to avoid getting hit on, and now what had she done? Invited a man she’d never set eyes on before to hit on her. What should her strategy be? Yes or no? Run or stay? Encourage or play it cool? The choices whirled in her head for what seemed like far longer than it took for a man with a long, smooth, confident stride to reach her.

In the end, she smiled. What woman wouldn’t? Up close, he was what she could only inadequately describe as a stunner. All the things that had got her hot from a distance were turned up by a degree of about a thousand in proximity.

‘Hello . . . I’ll join you then, shall I?’ He hitched himself easily onto the stool at her side, his long legs making the action easy, effortless and elegant.

‘Hi,’ she answered, trying to breathe deeply without appearing to.

Don’t let him see that he’s already made you into a crazy woman. Just play it cool, Lizzie, for God’s sake.

She waited for some gambit or other, but he just smiled at her, his eyes steady, yet also full of amusement, in fact downright merriment. He was having a whale of a time already, and she realised she was too, dangerous as he seemed. This wasn’t the kind of man she could handle in the way she usually handled men.

‘Thank you for the drink,’ she blurted out, unable to take the pressure of his smile and his gently mocking eyes. ‘It wasn’t what I expected, to be honest.’ She glanced at his identical glass. ‘It doesn’t seem like a man’s drink . . . neat gin. Not really.’

Still not speaking, he reached for his glass, and nodded that she take up hers. They clinked them together, and he took a long swallow from his. Lizzie watched the slow undulation of his throat. He was wearing a three-piece suit, a very good one in an expensive shade of washed-out grey-blue. His shirt was light blue and open at the neck.

The little triangle of exposed flesh at his throat seemed to invite the tongue. What would his skin taste like? Not as sharp as gin, no doubt, but just as much of a challenge and ten times as heady.

‘Well, I am a man, as you can see.’ He set down his glass again, and turned more to face her, doing that showcasing, ‘look at the goods’ thing again. ‘But I’m happy to give you more proof, if you like?’

Lizzie took a quick sip of her own drink, to steady herself. The silvery, balsamic taste braced her up.

‘That won’t be necessary.’ She paused, feeling the gin sizzle in her blood. ‘Not right here at least.’

He shook his head and laughed softly, the light from above dancing on his curls, turning soft ash-blond into molten gold. ‘That’s what I like. Straight to the point. Now we’re talking.’ Reaching into his jacket pocket, he drew out a black leather wallet and peeled out a banknote, a fifty by the look of it, and dropped it beside his glass as he slipped off the stool again. Reaching for her arm, he said, ‘Let’s go up to my room. I hate wasting time.’

Good grief, does he think I’m an escort?

The thought plummeted into the space between them like a great Acme anvil. It was possible. Definitely possible. And it would explain the ‘eyes across a bar, nodding and buying drinks’ dance. Lizzie had already twigged that the Lawns bar was a place likely to be rife with that sort of thing, and it wasn’t as if she didn’t
know
anything about escorting. One of her dearest friends had been one, if only part time and not lately, and Brent would most certainly be alarmed that she’d fallen so naively into this pickle of all pickles. She imagined telling him about this afterwards, perhaps making a big comical thing out of her near escape, and hopefully raising some of the old, wickedly droll humour that fate and loss had knocked out of her beloved house-mate.