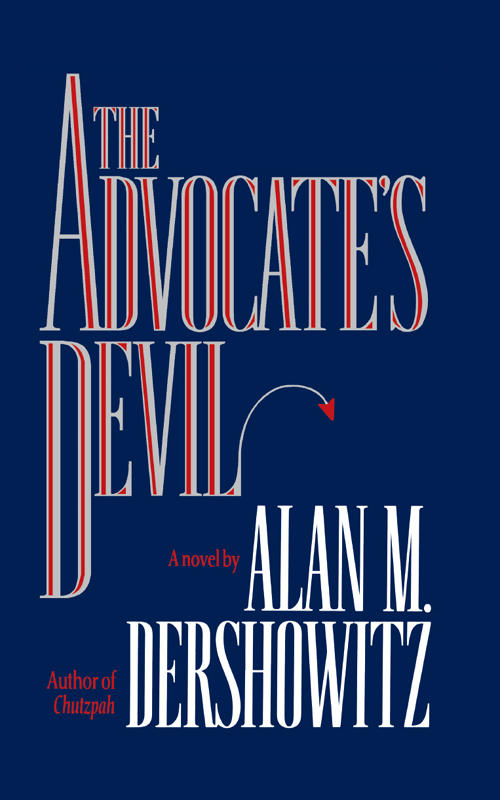 Other Books by Alan M. Dershowitz

T
HE
B
EST
D
EFENSE

R
EVERSAL OF
F
ORTUNE:
Inside the von Bülow Case

T
HE
A
BUSE
E
XCUSE:
And Other Cop-outs, SOB Stories, and Evasions of Responsibility

Publisher’s Note:
This is a work of fiction. Names, characters, places, and incidents either are the product of the author’s imagination or
are used fictitiously, and any resemblance to actual persons, living or dead, events, or locales is entirely coincidental.

My first novel is lovingly dedicated
to my firstborn, Elon,
who has inspired me,
encouraged me,
and improved everything
I have written.

Other Books by Alan M. Dershowitz

PART I: Innocent until Proven Guilty

PART II: A Jury of His Peers

Finally, a debt of gratitude to the several generations of Harvard Law School students with whom I have debated these ethical
issues. I hope this book contributes to the continuation of that debate.

Jennifer Dowling was recalling the pain of the past year as she noticed the tall, attractive man walking in her direction
from Avenue of the Americas. A cold March rain drenched West Fifty-fifth Street, forming pools wherever there were faults
in the sidewalk. Every weekend since New Year’s had been a weather disaster, making it unbearable for Jennifer to travel to
her weekend hideaway in the Catskills. Not that she had been much in the mood for solitude during her recent legal ordeal.
Now that it was finally over, she craved the healing isolation of her simple country bungalow. Yet the prospect of driving
up alone along dark, icy roads late on a winter Friday night was not something she found comforting, so she had decided to
remain in the city again. Nor had her mood been brightened any by the notice she had received that this was the weekend the
water heater in her co-op was scheduled for maintenance—no hot water for twenty-four hours. “Make that trashed and grungy,”
she complained to herself.

The man walking toward her crossed into her path, halting her progress. She veered to the right to pass him, but he seemed
to have the same idea, so they ended up in a balletlike to and fro until they both stopped. The man was so tall that Jennifer,
who was five feet six, came up only to his chest.

“Care to dance in the rain?” His smile, punctuated by blue eyes looking down at her, was magnetic.

“Dry off with a cup of coffee, then?”

“Are you crazy? This is New York. You’re obviously dangerous—”

“Or deranged,” he finished for her, and they both smiled.

The man gently took her elbow and steered her to the lobby of the skyscraper looming beside them. Oh, why not, Jennifer rationalized.
It was broad daylight. What’s the worst that could happen? Jennifer allowed the man to lead her out of the rain.

The bistro inside was crowded and noisy, but her tall companion shouldered his way to a small window table, miraculously empty.
“Do you know this place?” he asked her as he gracefully shed his black leather coat.

“I’ve never been here, though I work in the neighborhood.”

Jennifer started to say yes but corrected herself. “Used to be, now it’s advertising. How did you know?”

He put one huge hand over the table, and she shook it, “I’m Joe Campbell.” He waited to see her reaction; there was none.
Only her own strong handshake in response.

“I’m Jennifer Dowling,” she said as the waiter appeared.

“Make that two,” Joe Campbell said, not taking his eyes from her face.

Thank you, God, Jennifer said to herself. And to think she had written off this weekend.

The evening had started with drinks in the “Quiet Lounge” of the Charles, the hotel in Cambridge where Jennifer was staying.
“It was fortuitous, you’re having to be in Boston.” He raised his mineral water in a toast and allowed his eyes to play over
the sleek, sophisticated woman seated opposite him. “As in fortunate.”

Actually Jennifer already knew that. They had planned this date over their cup of coffee five days ago, and she had managed
to collect a lot of information about him in the meantime. He was the real item, no question about it. Everything he’d told
her about himself checked out—including the fact that he was the starting point guard for the New York Knicks. What he hadn’t
told her was how famous he was. And not being a pro basketball fan, she didn’t know that the Knicks had acquired the star
point guard from Golden State after losing the final game of the 1994 playoffs. He had been dubbed “the White Knight” by the
fickle New York fans, who were counting on him as their last hope for an NBA championship during the Patrick Ewing era.

A group of young men dressed in business suits wandered into the bar, and Jennifer could feel Joe recede. “Any minute those
guys are going to come over here and bug us,” he said quietly. “You ready for dinner?”

Jennifer nodded, getting up from her seat. He led them away from the group, and as they passed from the dimly lit lounge to
the lobby, he bent his head and adjusted his hat lower. He was really quite shy, for all his bravado, Jennifer thought to
herself.

A nice-looking man in jeans and a sport jacket politely accosted them at the hotel door just as they were leaving. “Get the
Celtics good tomorrow night, please, Joe. I’m from New York, and the Celt fans torment me.” Campbell smiled without looking
up.

The driver of the white Lexus limo had the door open before they got there, and Joe politely guided her onto the rear seat.
“Nice car. Is it white because of your nickname?” She smiled coyly. To Jennifer the idea of a “White Knight” in her life made
a good deal of sense.

“Maybe, I guess, now that you mention it.”

“Why do they call you that?”

“Well, there’s the official and the unofficial explanation. For one thing, I was the only white starter when I played for
Northeastern. And now, of course, the Knicks fans hope I can get them a championship.”

“Is that official or not?” Her voice was teasing. Joe looked slightly edgy for a moment.

“Official. The unofficial reason is because I was always the cleanest ballplayer on the team.”

“What does that mean, you didn’t tell dirty jokes?”

“I didn’t have a garbage mouth—you know, dis’ my opponent and stuff like that. It also means I didn’t use my elbows—unless
absolutely necessary.”

“And what about now? Do you roughhouse now?”

He almost was going to answer her until he realized she was teasing again. Jennifer was smart. He liked that. “Depends on
the circumstances. Seriously, it’s impossible to stay clean in the pros. Too many muscular bodies banging around in too little
space.”

The thought of Joe Campbell’s muscular torso under his suede jacket flashed pleasantly, almost electrically, through her mind.

There was always that undefined moment when Jennifer knew it was time to take a relationship to the physical. When she was
younger she wouldn’t let herself acknowledge it, though her body told her often in unmistakable ways. Now that she had turned
the corner into her thirties, her mind often took over from her body. It had been a rough year for Jennifer, what with the
legal mess she had just gotten through. There had not been much time for fun: not much inclination to be sexual. In the last
few weeks the cloud of pain had begun to lift, and she could feel herself reawakening. Her body was telling her she was responding
to Joe Campbell.

The large limo ambled through the streets of Cambridge. “I hope Italian is okay,” he said, and before she could reply he turned
away to look out the window.

The restaurant, Stellina’s, a northern Italian gourmet eatery in Watertown, was a bit off the beaten track. At dinner Joe
proved to be something of a control freak, ordering for both of them without asking, even insisting she change her mind over
the choice of salad. At first this was offputting, but as the meal went on, she began to see him as refreshingly different
from the usual wimps she tended to attract. And, in fact, Campbell turned out to be right about the delicious tricolore salad
with sun-dried tomatoes.

Back in the limo on their way to Cambridge, he made sure she was relaxed, offering her a cognac from the limo’s bar. There
was a comfortable silence between them. Jennifer had to admit the truth to herself: she was already a little bit crazy about
him.

And this was not lost on Campbell. In fact, nothing was lost on Joe. He was one of the most instinctual ballplayers in the
NBA, with a reputation for having the smartest hands in the league. He could sense from the look in an opponent’s eyes which
way he was going to pass, or whether he would drive toward the hoop. Joe’s hands were always there a split second before—deflecting,
poking, flicking. Offense might be a function of raw athletic talent, but defense was intuitive. You had to sense what your
opponent was thinking, planning, and doing in order to beat him to the move.