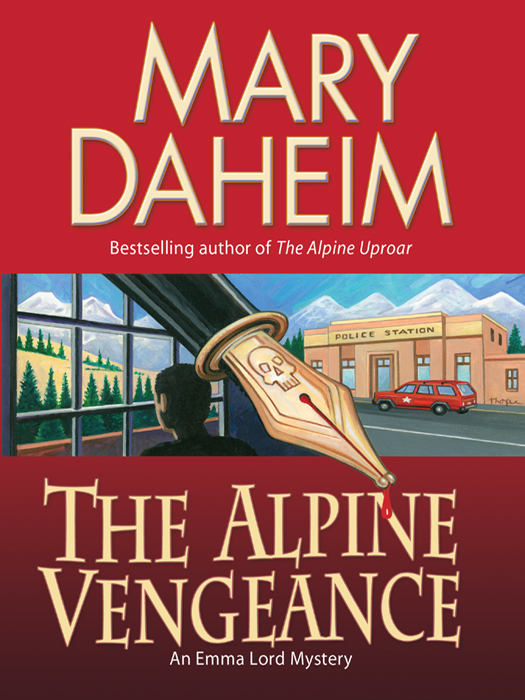 The Alpine Vengeance
is a work of fiction. Names, characters, places, and incidents are the products of the author’s imagination or are used fictitiously. Any resemblance to actual events, locales, or persons, living or dead, is entirely coincidental.

To the real Dustin, who is not only a dear family friend but
such a good photographer that Emma Lord would hire him if
he could only move to Alpine.

The narrative takes place in late November and early December of 2004.

M
Y TEENAGE DAUGHTER IS PREGNUNT BY A MARRED MAN
who used to be my husband but isn’t her father (far as I know) and she wants to keep the baby, but I got four other kids (besides her) so we’ll be too crowded with only two bedrooms and one bathroom (outside) and the roof leeks’—that’s L-E-E-K-S. ‘I told my daughter to get a job and move out, but she don’t feel good and can’t work. I can’t ether because my back hurts too bad and my boyfriend was layed off last week. My mama can’t help out, because she’s got the emfasima and my dad left town ten years ago with my second husband. What should I do? Oh—I need your recipe for how to pickel’—that’s P-I-C-K-E-L—‘a herring. Xmas is coming.’ ”

My House & Home editor whipped off her glasses and began rubbing her eyes until they squeaked. “Oooh! Why did I ever think it was a good idea to write an advice column? Why don’t people have sense? Why didn’t I do cooking hints instead?”

“You do that already with syndicated filler,” I reminded Vida Runkel, tactfully omitting that she knew far more about human
behavior than she did about cooking. “I think you’ve handled the first two weeks of letters very well. How about telling whoever this is that they should talk to their clergyman? If they have one.”

Vida put her glasses back on and cradled her chin in her hands. “That’s so pat, Emma.”

Vida wasn’t bragging. As a native, she is the resident Source of All Things Alpine, including the rest of Skykomish County. Vida can practically count all the hairs on each head in our mountainous part of the world. Upon rare occasion, she doesn’t recognize a newcomer or—God forbid—someone else who has slipped under her radar.

My ad manager, Leo Walsh, wasn’t in, so I sat on the edge of his desk, which is next to Vida’s. “What are you going to tell Ms. Pickled?” I asked, expecting a typical no-nonsense, no-holds-barred response.

But Vida looked uncomfortable, one hand fiddling with the big bow on her green-and-white-striped blouse. She didn’t reply immediately, and when she did, the words came in a whisper: “Where’s Amanda? I can’t see her behind the desk in the reception area.”

“She’s probably in the back shop, delivering Kip’s mail and the first batch of classifieds for this week’s edition.”

Vida nodded once. “After Amanda finally settled down, she’s done a good job filling in for Ginny. I hate to see her go, but of course the post office needs her.”

The mention of Amanda Hanson’s temporary stint as our office manager touched upon the matter at hand. It also rubbed at a raw wound in Vida’s heart. “Okay,” I said quietly, in case Amanda suddenly reappeared, “I assume you’re alluding to a suggestion that Ms. Pickled Herring’s grandchild should be put up for adoption?”

“Yes.” Vida straightened her wide shoulders. “This nitwit who wrote the letter doesn’t mention how far along her daughter is. If Amanda and Walt’s plan to take in Holly Gross’s children drags on through all the red tape involved with a mother who is in prison, it might be better for the Hansons to step in and pay for this silly teenager’s medical care.”

“Good point,” I agreed, but was loath to say more since the youngest of Holly’s three kids had been fathered by Vida’s grandson Roger. In the past six weeks since their drug-dealing mother had been arrested for shooting her partner in crime, any discussion of the baby’s fate was off-limits. But a day never went by that I didn’t want to ask Vida if her daughter Amy and son-in-law Ted had made any decisions regarding their grandson. I didn’t dare, for fear of embarrassing Vida any further. While my House & Home editor might divulge the most intimate secrets of anyone within her purview, Vida’s own problems were tucked securely under her innumerable and often outlandish hats. “One of us could talk to Amanda. I know she and Walt are getting frustrated.”

“I’ll do it,” Vida volunteered. “We don’t have much time in terms of publishing this letter in my column for Wednesday’s edition.”

“Right,” I said, glancing at Leo’s desk calendar. It was
Monday, November 29. Thanksgiving was past, Christmas was less than a month away, and we’d had a few snow flurries at Alpine’s almost three-thousand-foot level. I scooted off the desk as our sole reporter, Mitch Laskey, entered the office.

“You should’ve warned me,” Mitch said, though I wasn’t sure if he was addressing Vida or me—or both. “Never interview Fuzzy Baugh on a Monday morning. He kept dozing off in his mayoral chair.”

“Fuzzy is no spring chicken,” Vida declared. “He dozes off frequently, including at city council meetings. Surely you heard he literally put himself to sleep yesterday morning when he gave witness at the Baptist church.”

Mitch grinned. “Is that why he has a bandage on his forehead?”

“Yes,” Vida said in disapproval. “He hit his head on the pulpit. I haven’t figured out if it’s a two-inch news story or an item for my ‘Scene Around Town’ column. It’s time for Fuzzy to retire.”

“Hunh,” Mitch said, settling his lanky frame behind his desk across from Leo’s. “I thought he was elected for life.”

“It’s an item for ‘Scene,’ ” I said, in one of my gentle reminders that I was
The Alpine Advocate
’s editor and publisher. Vida wasn’t the only one who needed an occasional refresher course in the paper’s pecking order. Her tenure went back some forty years, and many an Alpiner assumed she
was
the
Advocate
.

“Perhaps so,” she allowed. “I need four more items. Put on your thinking caps, please.”

As often happens, my grasp on power shifted once again. Smiling wryly, I headed for the cubbyhole that was my office. The phone rang just as I sat down.

“Emma?” a wan voice said at the other end.

“I’ve been thinking,” my longtime office manager said, “and
after talking it over with Rick, I don’t think I should come back to work so soon. I mean, I know my maternity leave ends as of Friday, and Amanda is supposed to fill in at the post office for the holiday rush, but with the new baby and Christmas and everything else, I’m way too tired. After New Year’s, I should feel stronger. Is that okay?”

I told myself I should’ve seen this coming. Ginny had stopped in at the office only a couple of times since the Erlandsons had their third son in October. Looking back, I realized I hadn’t seen her since we’d run into each other at the Grocery Basket the first week of November.

“Amanda plans to quit tomorrow,” I said. “The post office needs her starting December first. In fact, they need her now. We figured we could cope on our own for three days, but it’s a little late in the game to find somebody to fill in for the whole month of December.”

“Oh—you’re mad at me,” Ginny said in that glum, put-upon voice I knew so well. “I don’t blame you, but I’m really tapped. You’ve no idea what it’s like to cope with three boys when you’re not feeling good. Rick’s great, but now that he’s the bank manager, he can’t take over as much, especially this time of year.”

Although I’d had only one boy, his father had been absent for the first couple of decades, and I’d managed to soldier on. There was, however, the daunting prospect of insisting that Ginny come back to work ASAP, and then having her bitch, pout, and sulk all the way through December. Even during the other eleven months of the year,
merry
was not a word I’d think of in connection with our efficient but often cheerless office manager.

I tossed the ball back to her. “Who would you suggest as a replacement?”

“I’ve already thought about it,” Ginny said, sounding almost
cheerful—or at least not morose. “Denise Petersen. I mean, Denise
Jensen
. She kept her married name after the divorce.”

“I thought she’d gone back to work at the bank,” I said.

“She did,” Ginny replied, “but she never liked her teller’s job, and because her grandfather owns the Bank of Alpine, she felt she had to work there. Denise isn’t all that great with numbers and she can’t stand on her feet all day. She has really bad arches. She only went back because she needs the money after splitting up with Greg.”

I held my head with the hand that wasn’t holding the phone. “I don’t want to sound unsympathetic, Ginny, but you should’ve given me more notice. You’re putting us in a real bind.”

There was a pause before she spoke again. “I thought you always told me family came first. Was I so wrong?”

“That’s not fair,” I said, wondering why I felt defensive. “Look,” I said, seeing Sheriff Milo Dodge lope into the newsroom, “please give this a little more thought. Maybe we can work out something part-time.”

“Ohhh … that’s complicated.” Ginny sounded as if the concept overwhelmed her. “Before, it was all I could do to get Rick’s sister to take the kids full-time at the day care. I don’t think Donna would go for anything else. She’s already giving us a family discount.”

Unholy Fury by James Curran
The Token (#10): Shepard by Marata Eros
Snowbound and Eclipse by Richard S. Wheeler
Apocalyptic Organ Grinder by William Todd Rose
Lucky T by Kate Brian
Men of the Otherworld by Kelley Armstrong
Why the Right Went Wrong: ConservatismFrom Goldwater to the Tea Party and Beyond by E. J. Dionne Jr.
Talosian Chronicles 2: Star Dancer by Ben Winston
Love in a Blue Time by Hanif Kureishi
Interventions by Kofi Annan
Our partner