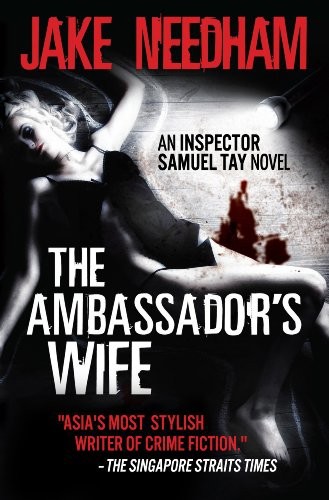 What the Press Says About Jake Needham

Bonus Preview of A WORLD OF TROUBLE

WHAT THE PRESS SAYS ABOUT JAKE NEEDHAM

“THE AMBASSADOR’S WIFE is another terrific book from a terrific writer. In the genre of crime fiction set in Asia, Jake Needham is in a class of his own.”
-- The Bangkok Post

“THE AMBASSADOR’S WIFE is an absorbing, believable portrayal of a veteran homicide cop in Singapore.”
-- The Japan Times

“Needham is Asia’s most stylish and atmospheric writer of crime fiction.”
-- The Straits Times (Singapore)

“Jake Needham has a knack for bringing intricate plots to life. His stories blur the line between fact and fiction and have a ‘ripped from the headlines’ feel. Buckle up and enjoy the ride.”
--CNNgo

“Needham is Michael Connelly with steamed rice.”
--The Bangkok Post

“No cliches. No BS. Thrillers written with a wry sense of irony in the mean-streets, fast-car, tough-talk tradition of Elmore Leonard. Needham has found acclaim as one of the best-selling English-language writers in Asia.”
-- The Edge (Singapore)

For Aey.
Who else?

The caller was a sergeant Tay didn’t know. He told Tay the Officer in Charge of the Special Investigations Section of CID wanted him to come the Singapore Marriott urgently. Tay asked what was going on. The sergeant said he didn’t know.

Oddly enough, Tay was at that moment only a few blocks from the Marriott. He was stretching his lunch hour a bit browsing in Sunny’s, a used bookstore whose cheerful disorder was almost an act of public rebellion in tidy little Singapore. Sunny’s was on the third floor of Far East Plaza only a couple of hundred yards up Scotts Road. Was that just a coincidence, Tay wondered, or was he being summoned because the OC somehow knew he was at Sunny’s? He doubted his personal habits were that well known, but in Singapore you could never be absolutely certain about a thing like that.

Tay took the steps down to street level and walked quickly up Scotts Road. As he dodged through the sidewalk crowds he tried not to think too much about where he was going. He didn’t just dislike the Marriott, he loathed the goddamned place.

It broke his heart sometimes, this city of his. Back before the Marriott had been built, there was a traditional Chinese department store on that very same corner. It was a glorious building, each of its five floors wrapped in graceful, iron-arched galleries supported by tiled colonnades. Tay remembered the mysterious air they had cast over the structure, the way they had obscured its interior in dim shadows and enveloped it in an unnaturally soft, almost dreamlike light. Parallel lines of dark green shutters bordered every floor of the store and, as Singapore’s warm winds blew in and out of the half-open windows, the shutters clicked and clattered together with a sound that came back to him now with absolute clarity even after almost forty years.

Buildings like that were all gone, as gone as if they had never existed at all, and now the city was mostly somewhere he did not know, somewhere he had never been. For over thirty years the people who decided such things, the bastards, had been tearing down glorious structures just because they were old. Sometimes they even replaced them with new structures touted as modern versions of whatever they replaced. They never were, of course. They never were anything, really, other than just new. Through the merciless grinders of progress the soul of a city had passed, along even with Tay’s own soul, and each of them had emerged as…well, he really had no idea.

Sometimes Tay thought he could close his eyes and see everything again just as it had been before, back when he was eight years old and Singapore was thrilling to him; but he wasn’t absolutely sure anymore he really could. Was he seeing something he actually remembered, or was he only seeing something he hoped he remembered?

The older Tay got, the harder it was for him to tell.

TAY’S
sergeant, Robbie Kang, was waiting for him just inside the Marriott’s main entrance. Kang had long, black hair and a fair complexion and was tall and gangly for a Singaporean. He was wearing his customary short-sleeved white shirt with a button-down collar and a pair of dark chinos.

“All I know is that somebody called to say the Chief wanted me here fast. And when the big bull trumpets, I answer the call.”

“You haven’t looked at the scene yourself yet, Sergeant?”

“No, sir.” Kang shoved his glasses up the bridge of his nose with his forefinger. “Not yet.”

Tay had never before had to deal with a woman found dead in one of the city’s five-star hotels, not even a neatly expired woman let alone one who had become deceased in such a manner that Sergeant Kang felt compelled to describe it as messy. And he really didn’t want to start now.

Even after nearly twenty years as a policeman, each time he approached the scene of a violent crime he struggled against a squeamishness he feared might yet master him entirely. For years he had watched his colleagues out of the corner of his eye searching for someone else who shared his secret weakness, but he had never found anyone at all. As far as he could tell, his colleagues thought nothing of spending an afternoon poking around the charred corpses of two children killed in a suspicious apartment fire and then going straight out for a rare steak.

Tay couldn’t do it. Whatever gene might be required to achieve that sort of detachment, he lacked it.

For a fleeting moment, Tay toyed with telling Sergeant Kang that he could no longer bear any of it. He would not on this day stand gazing down at broken bones, unsupported flesh, and extruded innards. He would not squat down next to a glistening heap of blood and tissue, poke at blood-drenched clothing, and try to still his pounding heart while he fought against nausea. He would not do that again. Not ever again.

But Tay said none of that.

What he said was this.

The elevators were only a few steps away. Kang pushed the call button and one opened immediately. Inside, Kang touched twenty-six, Tay heard a slight humming sound, and the elevator doors closed as silently as they had opened. As he and Sergeant Kang levitated in an air-conditioned hush, Tay tilted his head back against the polished wood paneling and shut his eyes.

Singapore was normally an uncomplicated place to be a policeman, particularly one who investigated homicides. In Tay’s tiny country — its five million people an ethnic stew of Chinese, Malays, Indians, Caucasians, and Eurasians together with a smattering of almost every other race on earth — there were few criminals and even fewer killers. No more than a couple of dozen murders were committed in Singapore each year, almost all of which were the result of domestic violence. But that Singapore’s few killers mostly killed people to whom they were related did nothing to make the killings any easier for Samuel Tay to take.

In his two decades in the Criminal Investigation Department of the Singapore Police Force, Tay had seen enough dead bodies to last him several lifetimes: bodies broken in stairwells and bodies dumped in alleys; bodies battered by cricket bats and bodies crushed with tire irons; bodies opened with gaping knife wounds and bodies flattened by cinder blocks; bodies beaten into raw meat with golf clubs and bodies ripped into unidentifiable shreds by dogs; bodies in bed with their hands neatly folded and bodies in the harbor with crabs crawling out of them. Tay had stared at all kinds of dead bodies and he could remember each and every one of them with a clarity verging on the pornographic.

Murders in Singapore weren’t the romanticized duels between clever killers and plodding investigators that ended up as Michael Douglas movies. They were mostly sad and sordid events perpetrated by people who had lost money, lost a job, lost a spouse, lost hope. When Tay entered the places where desperation had taken control of people and turned them into killers, he could feel their sadness and despair pressing down on him. It was as real and palpable as a shroud.

Was he just getting old or was the carnage getting worse? When Tay first began investigating murders, he assumed he was dealing with people who were more or less like the people policemen had always dealt with, but he wasn’t so sure of that anymore. More and more these days, Tay found himself thinking that the truth of it was really quite simple: we are worse people now than we were twenty years ago, and every year we get even worse.

Tay didn’t want to believe that, he really didn’t, but so help him God, at the bottom of whatever passed for his soul these days, he was certain it was true.

“HERE
we are, sir,” Sergeant Kang said when the elevator doors opened.

Before Kang could answer, a blue-uniformed patrolman appeared from somewhere. “I’m sorry, sir, but this floor is closed to all—”

“What room, Robbie?” Tay asked again, cutting off the patrolman.

Tay strode off down the corridor and Sergeant Kang pulled his plastic-coated warrant card from his back pocket and draped the chain around his neck. The patrolman barely glanced at it. Instead, he shot a look toward where Tay had already disappeared.

“He’s okay,” Kang said. “He’s just having one of his twitchy days.”

The Marriott has only sixteen guest rooms on each floor. All of them face the outside of the tower while a wide corridor carpeted in wine red and bordered with brown-and-white marble traces the building’s octagonal shape around the core where the three passenger elevators and the service elevator are located. The corridor itself is entirely white. White walls, white doors, white ceiling. Lighted by a soft glow from the wall sconces spaced evenly along both sides, the whole effect is tranquil to the point of being spooky.

There were four men outside the door to room 2608. Three wore dark suits and were arrayed in a sort of arc facing the doorway, in front of which the fourth, a uniformed patrolman, stood with his arms folded. The grouping made Tay think of a tiny band of Christmas carolers waiting for a choirmaster to lead them in song.

“I’m Inspector Tay,” he announced when he got to where the men were standing. “And this is Sergeant Kang.”

Tay examined the man who had spoken and registered both his American accent and the chummy way he had introduced himself. Was anyone actually named Bill? That was just a nickname for William, wasn’t it?

“This is Mike Evans, my Executive Assistant Manager,” Barwell continued, indicating the man on his left, “and my other colleague is Ramesh Keshar, our Chief of Security.”

Tay glanced at Evans, whose short hair and well-scrubbed face unmistakably marked him as another American. So far, Tay thought, this had all the makings of an authentically crappy day. First the stupid building, and now all these Americans.

Father of the Man by Stephen Benatar
Flirting with Boys by Hailey Abbott
Ethan: Lord of Scandals by Grace Burrowes
The Saga of Harlan Waugh (The Mountain Men) by Terry Grosz
The Teacher's Tales of Terror by Chris Priestley
BITCH (A Romantic Suspense Novel) by Calloway, Cay
Black Powder by Ally Sherrick
The Shadows of Stormclyffe Hall by Lauren Smith
To Be Free by Marie-Ange Langlois
Behind the Courtesan’s Mask by Marguerite Kaye
Our partner