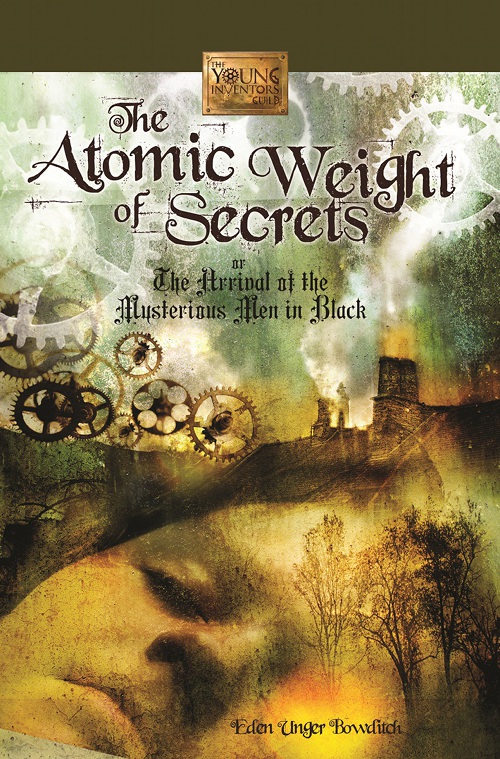 T
HE
A
TOMIC
W
EIGHT OF
S
ECRETS

THE ARRIVAL OF THE

No part of this book may be reproduced in any form or by electronic means, including information storage and retrieval systems, without written permission from the publisher, except by a reviewer, who may quote passages in a review.

JULIUS, LYRIC, AND CYRUS, WHO SHOWED ME WHERE

IS SOMETHING WE CAN TOUCH.

AND TO THE LOVE OF MY LIFE,

WITHOUT WHOM I JUST WOULDN’T BE–NATE.

CHAPTER 1:
ONE DROP FROM DISASTER
or Science Interrupted

CHAPTER 2:
MINDS OVER MATTER
or A View from the Schoolyard

CHAPTER 3:
A MODEST PROPOSAL
or How Lucy Came to Bite Her Nails

CHAPTER 4:
THE SCHOOL AT SOLE MANNER FARM
or Jasper and Lucy Find Their Places

CHAPTER 6:
IN A CLASS OF THEIR OWN
or Miss Brett Discovers the Gap

CHAPTER 8:
THE SOPRANO’S SON
or Noah Shares Someone Fit for a King

CHAPTER 9:
THE BIG BLACK BARRIER
or How the Children Found the Fence

CHAPTER 10:
WEEKENDS IN THE MEADOW
or When a Second Isn’t Enough

CHAPTER 11:
SOMETHING RINGS A BELL FOR JASPER
or Faye Flies Off the Handle

CHAPTER 12:
ALL PLANS UP IN THE AIR
or Faye Finds a Soft Spot

CHAPTER 14:
A BRAIN FOR DR. BANNEKER
or Wallace Finds His Feet

CHAPTER 15:
THE GREEN BOOK SHARES A SECRET
or Lucy’s Flowers

CHAPTER 16:
LUCY TELLS A TAIL
or Pieces Begin to Fall

CHAPTER 17:
LETTERS FROM NO ONE
or What Happened in the Meadow

CHAPTER 19:
THE POWER OF FLIGHT
or The Language of Light

CHAPTER 20:
THE DISTURBING SUBSTITUTION
or What Just Flew In

CHAPTER 21:
THE BIG UNLESS
or Miss Brett Makes the Call

CHAPTER 23:
DECISIONS CAN BE RELATIVE
or The Right Brothers for the Job

CHAPTER 24:
A BICYCLE BUILT FOR FIVE
or The Long and Winding Road

CHAPTER 25:
AN APPLE FOR TEACHER
or Wallace Empties His Pocket

CHAPTER 26:
THE BACK OF KOMAR ROMAK
or The Man Who Wasn’t There

CHAPTER 27:
THE YOUNG INVENTORS ON THE MOVE
or The First Car and What They Found There

CHAPTER 28:
MUCH ADO ABOUT NOTHING
or The Mysterious Beyond

For some, tiny moments of invention can lead to bigger and more powerful uses of brainpower, unleashing something mystical within. This, good reader, is the secret to where the real magic lies.

But be wary of what magic you bring into this world, because sometimes we cannot undo the magic we create. 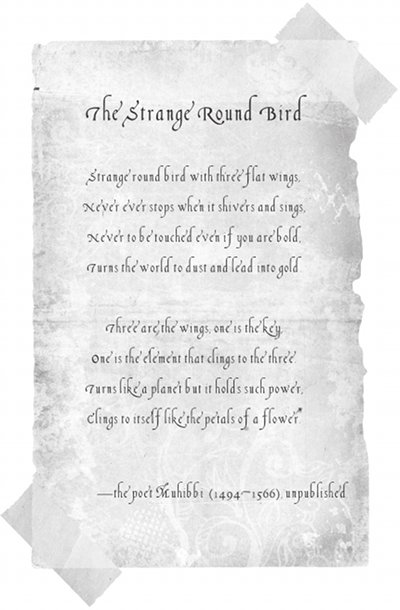 T
here were two things the scientist knew for certain. One, he had only seconds to change the world. And, two, if he took too long, all his efforts might be for nothing.

As beads of sweat on his forehead threatened to rain into his eyes, he thought to himself,
Not now.
With only a handful of moments to achieve the correct ratio, he could ill afford the time or movement to wipe away the perspiration.

His hand twitched ever so slightly, his fingers motionless, as he clutched the burette. Trying not to blink, he hooked his elbow on the edge of the table and leaned in to brace himself. The corner of the table cut into his arm, but he had no choice. He had to prevent his hand from shaking any way he could—his right hand, anyway. His left, holding the beaker, continued a slow, circular spin, to be sure that the resin, when released, would not settle at the bottom, and that the other liquid remained in constant motion. With so much resting on an action so small, he could not make even the tiniest of mistakes.

The scientist took a deep breath and let it out slowly. This eased the fog beginning to cloud his glasses. One droplet—one golden droplet from the burette’s long, slender glass tube—was all he needed. The golden resin in the burette had to be released into the rotating beaker and captured in the clear, viscous liquid. Any more than one droplet, even a fraction more, and, after months and months of computations, he would have to begin everything all over again. That is, if he survived the catastrophe.

His thumb ever so gently touched the rubber bulb at the end of the burette. This light pressure pushed the resin down the glass tube, a small golden bulge appearing at the bottom.

The sound of a creaking door suddenly filled the silent room. His breath caught in his throat.
Careful. Concentrate. One droplet.

Bound to Danger by Frost, Thalia
Lady Waverly's Lovers by Jess Michaels
Two Times as Hot by Cat Johnson
Box of Zombies: Rise of the Dead Volumes 1-3 by Burgess, Donna
Sioux Slave by Georgina Gentry
Being Amber by Sylvia Ryan
Land of the Beautiful Dead by R. Lee Smith
The Secrets Women Keep by Fanny Blake
Can't Stop Loving You by Lisa Harrison Jackson
The Lady Who Saw Too Much by Thomasine Rappold
Our partner