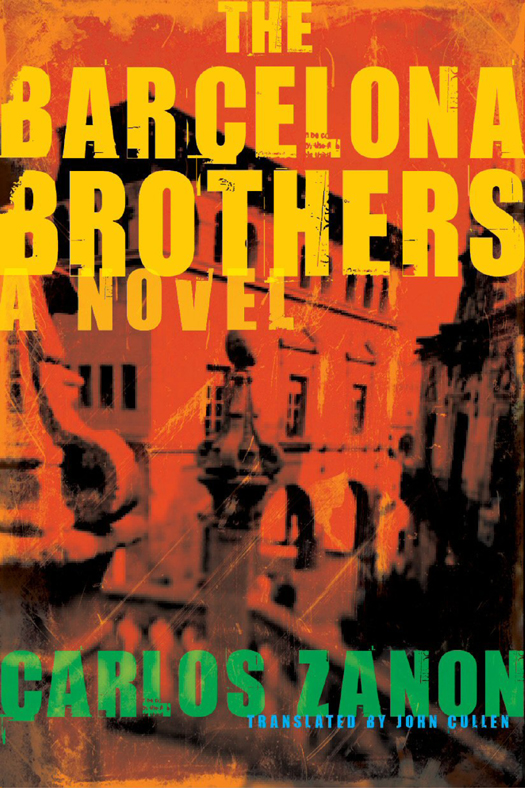 The right of Carlos Zanón to be identified as author of this work has been asserted in accordance with Section 77 of the Copyright, Designs and Patents Act 1988.

All rights reserved. No part of this publication may be reproduced or transmitted in any form or by any means, electronic or mechanical, including photocopying, recording, or by any information storage and retrieval system, without written permission from Other Press LLC, except in the case of brief quotations in reviews for inclusion in a magazine, newspaper, or broadcast. For information write to Other Press LLC, 2 Park Avenue, 24th Floor, New York, NY 10016.
Or visit our Web site:
www.otherpress.com

This is a work of fiction. Names, characters, places, and incidents either are the product of the author’s imagination or are used fictitiously, and any resemblance to actual persons, living or dead, events, or locales is entirely coincidental.

—
NATHANIEL HAWTHORNE
,
The House of the Seven Gables

SOMEONE ON THE TELEVISION IS SAYING THAT THERE
were people back in the old days who earned their livelihood by reading the future in rivers, ponds, and mirrors. Salva, the bar owner, hears all that without listening to it. He jabs the remote control at the plasma screen as though wielding a magic wand whose powers are inexplicably fading.

Behind him, seated at the bar and clutching a glass of cognac, is Tanveer Hussein. He arrived with Epi a while ago, after a very strenuous night; nevertheless, he seems to have forgotten it, and he’s in a good mood. He gazes ironically upon Salva’s attempts to operate the pirated remote and asks him if he needs help. Supposedly, there was a day when he, Tanveer, installed satellite dishes. Salva doesn’t reply. He lifts his eyeglasses from his nose to his forehead and holds the clicker close to his eyes, because it’s early in the morning and he’s already begun to doubt everything. He sees
yellow buttons, red buttons, green buttons. All the same, all ridiculous.

When Epi and the
Moro
—the North African—came into the bar, Epi’s brother, Alex, was sitting at one of the tables in the back. As Epi crossed the room in long strides, he glanced at his favorite Space Invaders machine. Like a jealous lover gazing down on his beloved, asleep and alone, he was relieved to see that the machine was off. Then he went into the bathroom. He was carrying a sports bag printed with the words
MOSCOW 1980
.

Female Bulgarian shot-putters
, Alex thinks, automatically, as soon as he reads the legend on the bag. Epi didn’t even gesture in his brother’s direction when he came in. Maybe he didn’t see him.
Hairy Czech armpits, sad blue Slavic eyes
, Alex muses, recalling the televised broadcasts of the Olympic Games boycotted by the
yanquis
. Sleep’s pushing its way into his skull and affecting his vision. He looks at his watch: not even seven o’clock. It’s strange to be here and not in his bed at this hour; he’s never set foot in Salva’s bar so early. But he didn’t sleep much last night, and besides, he ran out of tobacco and coffee. And so, heroically, he got up, dressed, and went down to the bar, which he knew would just be opening. Now he’s sitting in front of a tall glass whose contents are in a state of combustion. It will be a good while before he’ll be able to take a sip, but to tell the truth, he’s in no hurry today.

Tanveer and Epi. Epi and Tanveer. Alex has heard that his little brother and the Moroccan were friends again, but Epi hasn’t said a word on the subject. Nothing good can come of it, as everybody knows. Everybody except Epi, apparently. Alex
takes two successive drags on his cigarette and tries to pick up the thread of the TV program, because it seems to be the sort of thing he remembers his father liking a lot.

On the screen, an expert from some distant university is asserting that if no one looks at you, you’re worthless. What an insight. You have a bag on your head. It doesn’t matter what you do or what you’re good for. Without eyes focused on you, you’ve got no story. No before and no after. You can’t return anywhere because nobody remembers you were there.

“These windbags are always depressing,” Alex mutters to himself. As if someone has heard him, the image on the television screen suddenly disappears. Salva makes what sounds like a triumphant noise. But now rifles appear, and camouflage outfits, ammunition vests, men in firing positions. Then birds in flight, a quail, followed by others, a bevy of stupid quail. Shots among the clouds, and what looks like a little bundle falls from the sky, provoking some mean, opportunist dogs.

Alex prefers blowhards to hunters, but nobody’s asking him. Nor does he protest. Instead, he moves his hand closer to his glass. Failed experiment—still too hot.

Epi’s in the restroom, standing in the dark. His eyes are fixed on the light switch, where there’s a small pinpoint of red light. He’s so tense he even notices the sawdust under his feet. The odor of bleach is starting to make him feel sick. Where do people get the strength for this? Cleaning the bathroom floor every morning, keeping their lives in order, doing things right?

A Pakistani enters the scene. He comes in smiling and gestures toward the back of the room. Salva, behind the bar,
advises him that he can’t use the john unless he buys something to drink. But the guy doesn’t understand or doesn’t want to understand, so he widens his smile by six more teeth and starts looking for the right door. Salva curses the Christian God and the armies of the Crusaders for not finishing what they started, but he goes back to his main concern: looking for replays of yesterday’s soccer goals.

“Leave that on, man, leave it on. I liked that stuff with the birds. Look, look, now they’re going after the pig,” Tanveer drawls.

The Paki pushes the restroom door, and Epi, who didn’t latch it, blocks it with his arm. The other apologizes, takes a step backward, and prepares to wait as long as it takes. He turns toward Alex, still smiling. But Epi’s brother doesn’t react. He’d like to enlighten the stranger:
That’s the way we Europeans are
, he’d like to explain.
Jerks first thing in the morning. Maybe it’s something left over from the French Revolution, kid
.

Epi closes the door and bolts it this time. He still doesn’t turn on the light. His sweat is soaking his T-shirt. He has to calm down. He starts to chant a prayer, the way he was taught to do as a child: say your prayers for a few minutes until you fall asleep. He starts the prayer once, twice, three times, but each time he reaches a point—bad sign—where he’s forgotten the rest.

All the same, he knows he can’t stay in here any longer; he knows there’s no alternative. For the umpteenth time, he touches the handle of the hammer he’s taken out of the gym bag, and a great deal of foolishness, a great many absurd,
inappropriate ideas, enter his mind. He thinks about how mad at him Mari’s going to be—Mari is Salva’s wife—when she has to clean up everything again. Blood, brains, broken glass, footsteps in the sawdust, on the spotless, polished surface of the bar. And of course, he thinks about Tiffany in order to screw up his courage, which seems to be failing him right when he needs it most. After a few seconds he opens the door. He’s surprised to find himself face to face with the Pakistani. Epi doesn’t know him from the barrio. He’s just another recently arrived pariah, looking at him out of deep black eyes and mumbling a few words that fall somewhere between Spanish and Urdu. Epi’s hardly out of the bathroom before the other guy’s already inside, relieving his cramps.

Tanveer’s still hypnotized by the hunting scenes on the television. Death, the game of hunters versus prey. The talk has turned to animals, how they sense danger in silence, in the deep stillness of the forest. The off-camera voice whispers that when it comes to wild boars, you have to know how to wait. The image breaks up, flashes of other channels appear, and there’s the blowhard program again, the same expert, covered with dandruff and enthralled by his own discourse, now talking about who the hell knows what.

Panic, Disorder, Crazed Confusion. The Gorgons. There were three of them, and they always kept one eye open, the cunning things.
Three, like the three of us: Salva, Epi, and me. Like the Three Musketeers, or the Three Little Pigs, and Tanveer, naturally, as the Big Bad Wolf
. As Alex thinks this, he watches Epi position himself behind his Moroccan friend. Surprised,
Alex looks on as his brother gently sets his sports bag on the floor, out of the way. Then Epi straightens up, keeping his arms at his sides. In his right hand, he’s holding a big hammer; its head brushes his knee. The thing looks incongruous to Alex. A hammer doesn’t fit in this scene. This is a bar. This is ordinary life. It seems more like a computer screen, like a video game: Epi has found the talisman in the bathroom, and he wants to use it right away. One thousand life points; user moves up one level.

“You’re gonna have to pay for the clicker,” Tanveer says. “You’ve never been any good at conning people, Salvita.”

Suddenly, everything starts happening fast. Salva turns around to tell Tanveer that he’s had it up to here with his comments. But the words won’t come out, because he sees Epi standing two paces behind Tanveer and clutching a large hammer with both hands, as if he’s waiting for Salva’s best pitch.

The bar owner’s sudden silence is a scream of warning to Tanveer that something’s happening behind him. He starts to turn around, and because he does, the hammer doesn’t hit him flush. Epi’s plan was to strike a clean blow to the head, one only, so that Tanveer would never know who or what killed him. But it wasn’t to be, and now he can’t stop.

He puts all his strength into the swing, completing it with his eyes half-closed. It looks to him as though he’s striking the reflection of something worn, burnished, metallic. In fact, he lands a glancing blow on Tanveer’s clavicle, cracking it and sending all six-foot-two of him immediately to the floor. As he falls, the Moroccan crashes against the legs of his attacker, causing
Epi to stumble and fall, too. Epi knows he has to spring to his feet, he has to get on top of Tanveer quickly and break his skull.

The Awakening: A Witch-Vampire Romance: Feel the Heat. by Renee, Anastasha
The Astronaut Wives Club: A True Story by Lily Koppel
Not Quite Darcy by Terri Meeker
Intrigued by Bertrice Small
Cockpit: A Second Chance Romance by Joanna Blake
A Royal Marriage by Rachelle McCalla
The Loch by Steve Alten
Raven's Warrior by Pratchett, Vincent
Prince of Demons 2: The Order of the Black Swan by Victoria Danann
The Serpent by Neil M. Gunn
Our partner