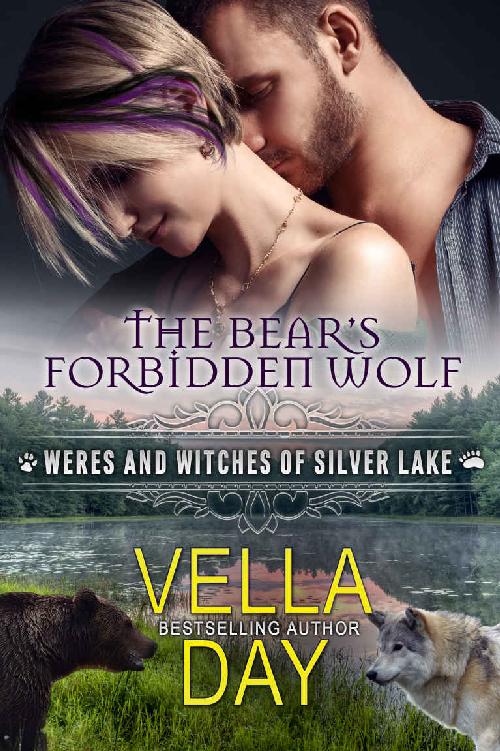 When forbidden love can turn deadly…

Part Wendayan, part wolf shifter, Ainsley Chancellor has spent her life fighting who she is. She carries the tainted blood of her Changeling Clan, but she refuses to embrace their evil ways.

But when she comes face-to-face with the sexy and totally off-limits, Jackson Murdoch, she feels her inner wolf yearn to be with his bear—a desire like she’s never felt before. However, mating with him would end in his ultimate demise.

Distrusting Changelings his entire life, Jackson, a bear-shifter, can’t deny the pull he feels for the irresistible wolf, but that doesn’t mean he has to accept her.

When tragedy strikes, Ainsley and Jackson are forced together. As their need intensifies to an all-time, undeniable high, can they keep their hands to themselves and defeat the Changeling Clan before it’s too late?

Excerpt from Her Reluctant Bear

Beneath the calm and shimmering surface lie intrigue, power, magic, and danger.

Welcome to Silver Lake—where appearances can be deceiving, and what you see isn’t truly what lies below.

To learn about Vella Day’s other new releases, contests, and find new authors, subscribe to
her newsletter and
get three free books
!

F
or the first
time in years, Ainsley Chancellor felt safe. Her wolf, who hadn’t been let free in way too long, was jonesing for a run. Ever since moving to Silver Lake, Tennessee two weeks ago, she’d been eyeing the hills on the edge of town. The problem was that her roommate told her Changelings roamed the area, and they were the last people she wanted to run into. It didn’t matter she was one herself. Her Clan was pure evil.

Happy to be off work, Ainsley unlocked the front door to the apartment and dropped her canvas purse on the linoleum kitchen counter. After grabbing a bottle of water from the fridge, she headed over to the red leather sofa—which doubled as her pullout bed—to enjoy a few minutes rest after her long day. Her feet hurt from standing since nine a.m. and her bones ached. Twenty-seven had never felt so old.

As an acupuncturist, not only did the work require a lot of concentration when placing the needles in her patient’s body, she spent much of her time assuring each of them that she could help manage the pain. While she loved her job, hitting the precise spot took concentration and energy—energy she hadn’t had today.

Her roommate and coworker, Blair Murdoch, came in a few seconds later, waving a stack of envelopes. Ainsley didn’t know how she always looked so good, especially in the not-so-stylish uniform they had to wear: blue slacks with a white shirt bearing the Silver Lake Wellness Center logo on the pocket. Blair’s long auburn hair that always looked perfect brought out her green eyes and porcelain skin.

“You got mail!” Blair said.

Ainsley’s pulse shot up. After she’d interviewed for her job last month, she’d moved to Tennessee and ended up staying with Blair. Mail was the last thing she expected. She prayed her brother hadn’t learned of her whereabouts. Nothing good could come of that. “Maybe it’s from the university.”

“Nope. Stamp’s from Scotland. It was forwarded from Atlanta.” Blair handed her the letter.

Hearing the location had her heart pounding. When she checked the return address, her pulse slowed. “It’s from Shamus!” How had he found her?

A wonderfully kind friend who I should have kept in touch with better.
“Shamus and I go way back. In fact, he’s a bear shifter.”

“Ah, like me.” Her roommate kicked off her tennis shoes, set down her purse, and then disappeared into the kitchen. The refrigerator door banged opened. “I thought you said bears and wolves didn’t get along over in Scotland,” she called out.

“They don’t get along the way they do here, but Shamus was my best friend since the fifth grade—until I met you, of course.” She and Blair spent the last four years in Georgia as roommates—two as undergraduates and then as graduates. “He kind of protected me against a few jerks who didn’t treat me well.”

Blair returned with a yogurt cup and a bottle of water in hand. “Protected you?”

Ainsley picked up her own bottle of water and drank from it. “Let’s just say he stood up for me. And I stood up for him too. I told you our town was a lot like yours in that the humans didn’t know about shifters.” But that was all she’d said. Now that she’d succeeded in disappearing—hopefully where her family couldn’t find her—it was time to come clean. “Where I lived, the bears had come to the area long before the wolves did, but eventually, the Changeling werewolves grew in number and decided to take what they wanted. Don’t get me wrong. There were good wolves that lived there too, but the bad ones seemed to be more prevalent. I’m sure I mentioned that my stepfather was the werewolf Alpha to the Changelings which made him the biggest ass of all.”

“You did. That must have been hard on you.”

“It was, which is why I’m across the pond now, far away from my family.”

“Got it. So then what happened?”

“The land that belonged to the bears was valuable in that it had the same kind of stone that helped the Changelings stay strong. Basically, we pushed the bears out.” During their four years together, Ainsley hadn’t wanted to discuss her evil Clan. She was too embarrassed to let anyone, except Blair, know what she was. Now that Ainsley was safe in her new town, it would do her soul good to let it all out.

“That pushing out stuff sounds like what the white man did to the Native Americans a long time ago. I hate to say it, but your Changelings sound exactly like ours.”

“Genetics don’t change because of geography.”

“True.” Blair peeled off the yogurt lid and dipped her spoon in. “How did you deal with it? I know you haven’t wanted to talk about it, so I’ll shut up if you want.”

“No. It’s time to air the dirty laundry, so to speak. Actually, it’s way past time. Because I don’t think my family will find me here, it’s safe to finally give you the lowdown. I should have told you all the sordid details long ago, but I didn’t want you to think badly of me.”

“I never would have.”

Ainsley wanted to believe that, but she’d never been willing to take the chance and tell Blair everything. “You wouldn’t have been scared thinking that I might…oh, I don’t know—rip out your throat in the middle of the night or something?”

Blair moved next to her on the sofa and set her food down. “I knew from the moment I met you that you had a good heart.”

Heat rose up her face. People didn’t compliment her very often. “Thanks. So what do you want to know?”

Facing her, Blair sat cross-legged on the sofa then brushed back her hair from her face. “A billion things. Like did your parents make you do terrible things against your will?”

That was a legitimate question given how bad the Changelings were. “No, but that might have been because I was a female and young. They kept me pretty much in the dark about their ways.”

“I always attributed my father’s Wendayan genes for keeping the evil lurking inside me at bay. It wasn’t until I was maybe thirteen that I overheard my brothers talking about some things they’d done—and it wasn’t pretty. It made me realize what Shamus had been saying all along about my Clan was true. At first, I thought he was just jealous of my family since we had money and his family didn’t, but he was trying to open my eyes.”

“What did you do when you learned your brothers weren’t nice people? Did you go to your parents and tell them?”

Ainsley held up a hand. “That’s a big fat no. I never liked my stepfather, and my mom wasn’t much better once she married him. Remember, they were both Changelings. One didn’t complain to either one of them and expect sympathy.”

Blair blew out a breath. “I know you said you didn’t have a real good home life, but I didn’t know it was rather loveless.”

She shrugged. “I didn’t know better. At least my real dad was great—until he died.” Ainsley looked off to the side, refusing to get all teary eyed. She was stronger than that. “The one good thing to come out of being raised a Changeling was learning how to fight.”

“Fight? How is that a good thing? When I grew up, I learned that I could count on my brothers to always be there for me.”

“You’re lucky. My two brothers went through the training with me, but I don’t remember them coming to my rescue—ever. Teaching all of us to do battle was my family’s way of keeping the wolf population strong.”

Blair unfolded her legs. “Who did you have to fight? Other wolves, I hope. Heaven forbid, if you had to go against a bear.”

“Just other wolves. They broke us into female and male groups at first, but since I had an affinity for battle, I moved up in the ranks rather quickly.” Ainsley hadn’t told anyone this before, but she didn’t want to have any more secrets. She was tired of them. The burden on her soul had already taken a big toll. “I had a special talent that I used, but only if I had to.”

Madeleine Strays: A Wife-Watching Romance by Max Sebastian
Make Me Melt by Karen Foley
The Old Axolotl: Hardware Dreams by Jacek Dukaj
Love and Glory: The Coltrane Saga, Book 3 by Patricia Hagan
Once More With Feeling by Emilie Richards
Rachel Donnelly by Lady Broke
Case of the Glacier Park Swallow by Anastasio, Dina
Wish on the Moon by Karen Rose Smith
Happy Birthday by Letícia Kartalian
The Wayfinders by Wade Davis
Our partner