Read The Beasts in the Void Online

The Beasts in the Void 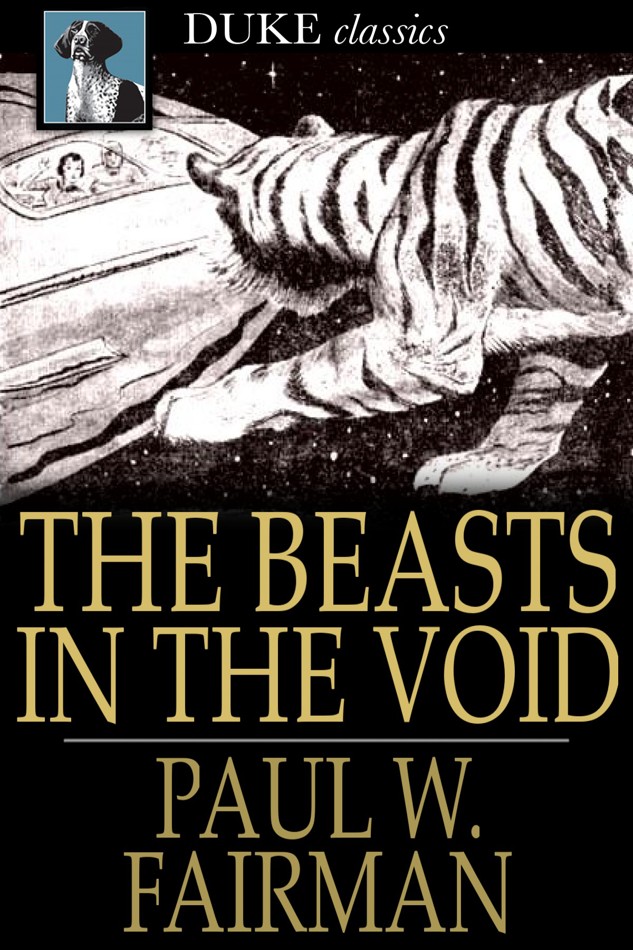 Holloway was used to big game hunters and their expeditions
to other worlds. But this trip was sheer madness—a space
ship stalking among—

The examiner looked doubtful and said, "But Mr. Holloway, regulations
require that I read your log before I take verbal testimony."

Holloway's face was drawn and ravaged. His bloodshot eyes sat in
black pits. They were trained on the Examiner but looked through him
rather than at him.

Holloway said, "But, I
must
talk! I've got to tell you about it. I
have to keep talking."

Holloway's words tumbled out. "It started in the control cabin there
in deep space. When Mrs. Kelvey came in. She was the blonde one. I
turned around and she said, 'Captain, there's a great big tiger in the
companionway.'"

The desperate Holloway, fearful of being stopped or running out of
words, went into minute detail. "She made the statement as a pouting
complaint, almost casually. Then, before I could speak, she realized
what she'd said and her face changed. A kind of horrified double-take.
'
A tiger? In the companionway of a space ship?
' This last was an
incredulous question she asked herself. Then she fainted. I looked
outside. I thought I saw something blurred and indistinct but it
vanished quickly if it was really there at all. The companionway was
empty. No tiger. No animal of any kind—"

The Examiner, holding up a hand of protest, looked like a man
directing traffic. "Please, Mr. Holloway—please. We must remember
regulations."

Holloway's eyes closed for a moment but he resolutely forced them open
as though afraid of something.

The scene was Holloway's two-room suite in the Space Port Hotel. There
were three men present—Holloway, skipper of the
Space King
, John
Mason, Port Resident, and Merle Kennedy, Section Examiner for the
Space Authority people. Kennedy regarded Holloway with frank concern.
Good heavens—the man was a complete mess. Looked ready to collapse.
Kennedy turned to Mason. "This can be postponed, you know."

Mason was regarding Holloway also. Strange, he thought; Holloway had
left in a fanfare of publicity. Now it appeared his return would be
even more dramatic. Maybe Holloway was that kind of a chap; the kind
things just happened to.

He was quite young though he certainly didn't look it now. He'd been
known as a playboy ever since his father struck it big in Venusian
oil. But good-looking, personable, he had worn the label well. He'd
been good copy because the public regarded him with patronizing
affection. To them, he'd been a nice kid having fun; not a young
wastrel wasting his father's money.

Naturally he would pick a glamour girl to play the romantic feminine
role and Melody Hayden had filled the bill perfectly. Together, they
had enchanted the public. Princess and Prince Charming stuff. Then
tragedy. Disaster in a rocketing sports car; Melody's coffin sealed
before the funeral; young Holloway coming off without a scratch.
Melody's death was a bombshell and everyone asked.
What will he do
now?
expecting of course, something sensational.

He didn't let them down. Dramatically, he announced a completely new
life. He bought a space ship and foreswore his old ways. He had quite
a reputation as a big game hunter. He'd stalked the vicious Plutonian
ice bears and lain in Venusian swamps waiting for the ten-ton lizards
to rise out of the slime. He had knocked over the wiliest of animals,
a telepathic Uranian mountain wolf and had dropped in flight a Martian
radar-bat, a feat duplicated by only three other marksmen of record.

So what more natural occupation than guiding hunting parties in deep
space? Holloway had been obviously torn by Melody's tragic death.
Perhaps out among the stars he could forget.

There had been some trouble, Mason recalled, in clearing Holloway's
first cruise. A party of five. Not to any established hunting ground
but a D. U. thing.
Destination Unknown
, and they were always
trouble. Clearance had been made, though, and now—here was Holloway
back again—dramatically of course—with one of his party dead and the
other four in trance-like stupors. Strange.

And stranger still, Holloway's reason for wanting to talk immediately;
with no rest—no medical attention:

"It will help keep me awake. I mustn't go to sleep. Can't I make you
understand?
I've got to stay awake.
"

Mason pitied the man. He turned to Kennedy. "I have the log here, sir.
Perhaps you could go over it now—"

Holloway leaned forward. "I'll tell you what's in the log. Every word
of it. If I just sit here waiting—"

Mason laid a hand on his knee. "It's all right, old chap. I won't let
you go to sleep. You and I will talk while Mr. Kennedy goes through
the log. It won't take long."

Mason handed the book to Kennedy. He was almost apologetic. "It's a
strange log, sir, It—"

"Strange?" Kennedy frowned. Logs had no right to be strange. There
were regulations—rules stating exactly how a log should be kept.

"Well sir, the lad is young. His first trip. I just meant there's
perhaps a little more in the log than should appear there."

"We'll see," Kennedy said. There was a slight frost on his words. If
disciplinary measures were in the offing it would pay not to get too
cozy with Holloway and the Resident.

We blasted at 2:18 p. m. A good getaway. Course 58.329 by the polar
angle. No blast sickness among the passengers. They are old hands. I
put the automatic board into control at 3:50 p. m. I checked the
tubes. Pressures balanced and equal.

I don't like this cruise. I don't like Murdo. He's a domineering slob.
The other four, well—Keebler is an alcoholic, Kelvey an empty-headed
opportunist. I don't particularly dislike them. They're just a
worthless pair who would rather fawn on Murdo and take his insults
than work for a living. The two wives are both young. Martha Keebler
has a child's mind in a woman's body. Jane Kelvey is an oversexed
witch with an indecent exposure complex. I may have trouble with her.
Already she's parading around in skimpy shorts and a bra. Evidently
Murdo doesn't care for women. He pays no attention to her. Money and
power are his dish. And a terrible restlessness.

Melody baby—I wish you were here—

I had a talk with Murdo about this silly cruise. Tried to swing him
onto something that makes a little more sense. Pluto, Venus,
Ganymede—some hunting ground I'm familiar with. No good. Even a
suggestion and he thinks you're crossing him and snorts like a bull.
Still demands to go to this place where big game prowls in space.
Where elephants and leopards and snakes and anything you can name fly
around your ship and look in your ports. Where you do your hunting in
space suits right out in the void.

Why in hell did I fall for this idiocy? Guess I just didn't care.
Maybe I thought it was a good idea because it sounded like a cruise
you could get killed on without much trouble. No—I shouldn't say
that. Melody wouldn't like me to say it. She was so wonderful—so
level-headed. How wrong they all were about us. About her. Because she
was so beautiful, I guess. I tried to tell them I'd married an angel
and they took bets among themselves on how long it would last. The
answer to that would have been forever. It still is. I've lost so much
and learned so much in such a very short time. The hell with Murdo and
his four puppets. I'll take them out and bring them back. Then I'll go
somewhere alone and I won't come back at all.

Course 28.493 by the polar angle. Went through small asteroid
field....

Kennedy looked up sharply. He frowned. "This log is unacceptable."

Holloway was pacing the floor, his eyes blank and terrible
"Unacceptable?"

"Course and position should be noted within each twenty-four hour
period. You missed June 5th entirely. You—" Kennedy leafed through
the pages. "Why at times you missed three and four days in sequence!"

"Sometimes I didn't have time to write."

Mason tried to hide his disgust. How did men like Kennedy get into
positions they weren't fitted for? The ass! Couldn't he see this man
was suffering? Mason said, "Why not reserve comment until you've
finished, Mr. Kennedy?"

Kennedy's eyes widened at the sharp tone of Mason's voice. Really.
When residents start dictating to Examiners—Kennedy saw the stiffness
in Mason's face. And something more. He went quickly back to his
reading:

I talked some more with Murdo about this fool cruise. He got wind of
our destination—wherever it is—from some rich idiot in Paris. And I
don't use
idiot
figuratively. His informant was in some kind of a
private nut house—an exclusive insane asylum of idiots with lots of
money—and he had lucid intervals. At one of these times he told Murdo
where he'd been and what had happened. I don't think Murdo believes
all of it but he wants to see for himself. Well, if he wants to spend
his money chasing meteorites it's his business.

Keebler got drunk as a goat. Strapped him in his bunk and left him
there. Murdo spent a few hours explaining guns to Mrs. Keebler. I
think he enjoys the look of wonder on her face. Makes him feel very
superior knowledgewise. Her face is just built that way and so far as
she's concerned he could be talking Greek. He thinks she's very
beautiful. I wonder if he ever saw Melody's picture?

Jane Kelvey is bored and has started taking it out on me. When I
passed her door it was open. She was taking a sponge bath, stark naked
in the middle of the cabin. She turned around to face me and did a
very bad job of acting flustered, trying to cover herself up with a
small sponge! How crude can a female get? She was hoping I'd come in.
If I had it would have been to slap her face. I got away as fast as I
could.

Course 41.864 by the Orion angle. Brushed a small asteroid.

I've been noting the time wrong. It should be figured on a
twenty-four-hour cycle. Midnight to midnight, the hell with it.

Had a fight with Murdo. He wanted to take over the ship. His words
were, "Let's get some speed out of this slop bucket." I reminded him I
was Captain. He reminded me he was footing the bills. I asked him how
he would like to be locked in his cabin for the remainder of the
cruise? He didn't say, but I guess he wouldn't have liked it because
he quieted down. Keebler has been quietly drunk for the last two days.
Lucky Keebler.

Jane Kelvey came to my cabin an hour ago. The rest were asleep. She
wore a blue dressing gown with nothing under it. I want to set down
what happened in case there's ever a kickback although I don't think
there ever will be.