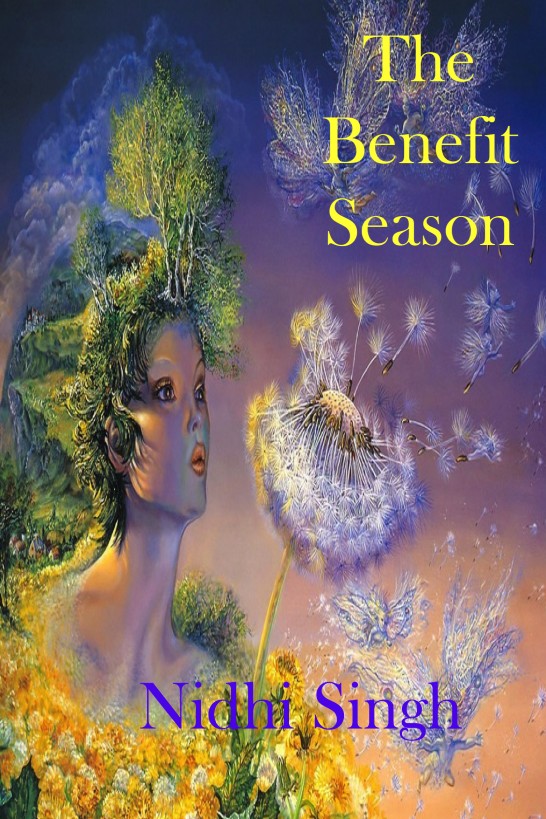 ‘The Benefit Season’ by Nidhi Singh Copyright May,
2014

Disclaimer
: This is a work of
imagination. Any resemblance to any event or person, living or
dead, is purely coincidental.

Published by Nidhi
SIngh at Smashwords

Chapter
4 Aarti arrives on the scene

Chapter
10 The Spy Who Came In From Nowhere

Chapter
12 The Shiny Monologue at Neemrana

Chapter
13 A Tiger by the Tail at Sariska

Chapter
14 What a good shot!

At 8:32 PM, on a cool, rain-kissed evening
in Mumbai, Mrs. Monal Nagrath- society lady and wife to Vishal
Nagrath, CEO, Phoenix Sports- vanished in the middle of her third
anniversary party, without so much as a teary taking of leave, or a
weary taking of stock of the fast vanishing refreshments that her
servants were quietly helping themselves to in the kitchen.

At roughly the same time, 876 miles away in
Delhi, Arjun Pasricha, vanished from the ceremonies of his
betrothal to childhood sweetheart, Aarti Khosla, without so much as
a moist eye, or a tug at the old-fashioned conscience.

On the face of it, it seemed strange.

But if you’d happened to scratch the
surface, it wouldn’t have been so hard to imagine that such a thing
was bound to happen.

Clouds dark with promise hang over the white
and grey of the ramparts of the crumbling Adilabad fort, which
provides a forlorn backdrop to the orange clay pigeons that are
flung across, and burst into smoke when hit. Aarti expertly swings
the pump-action shotgun on a dainty hip, her eye unwavering from
the target, scoring a perfect 25, every time.

Her father, foul-mouthed, foul-tempered,
retired Brigadier Khosla, isn’t such a crack shot and barely
manages to crack an 11, as he follows her on the semicircular
firing stations at the Trap and Skeet Range, trying to keep up with
the high and the low birds, and nixing his doubles.

I sit in the coolness of the AC lounge
sipping my Schweppes Tonic Water, watching them finish their skeet
shooting rounds out there in the boiling firmament of Delhi, where
clouds come and go during the monsoons without shedding as much as
a dribble. Being an armed forces kid, I can shoot too, but would
probably look very clumsy in front of the ace shooter Aarti. Which
would give another cause to the old man to gripe about the choices
his daughter makes in her friends, meaning me. And he’d never
stopped rubbing it in that I was of poor stock, since my father had
only risen as far as a lowly Lt. Col. in the army’s steep
pyramid.

My forte instead was in the track and field
events, from which the rigors of studies had weaned me away during
the Boards- once and for all. Then my recently widowed mom only
allowed me a short 5-mile run in the evenings, followed by the
cherished swim at the station pool, where I had the chance to be in
the company of Aarti. We would race each other in the pool and then
chat outside in the parking lot, with a leg swung over our
bicycles, till it became dark and the sentries became impatient,
wanting to lock the gates and go home.

I cannot remember a day when we were not in
each other’s company; going to the same school, the same college
and then the same Faculty of Management Studies at DU for our MBA.
Now we were going to the same place, Mumbai, for work after
finishing college. With my sports background I had landed a job
with Phoenix, a Sports Management Company, while she with her
number crunching skills, had found her moorings at Standard
Chartered Bank.

I stand up as Aarti and Khosla drop the
empty cartridges in a box on the range, and walk in, guns still
held up. Aarti hugs me close, grinning widely as usual, unmindful
of her sullen father who nods briskly as I wish him a pleasant
afternoon, before to her I say a pleasant ‘howdy’!

‘
So what are you having,
eh? What’s that?’ Khosla says- referring to my drink, as if he’d
caught me slipping in the contraband. He raises my glass to his
nose and wrinkles his face in disgust. ‘That’s meant to knock
people out- not revive them. A shot of gin in that will save your
life’.

His booming voice carries across the lounge,
sparsely populated at this time of the year when there hardly are
any competitions scheduled. The serious athletes would start coming
in during the fall. Right now, just a few members of the rifle
association are around, enjoying a meal and drink after having
finished their shooting during the cooler morning hours.

Hearing the thunder, a waiter rises like a
shadow behind the VP of the Rifle Association, and stands like a
question mark, half bent at the waist, his head bowed.

‘
So what will you have’,
Khosla turns to his daughter.

‘
Gin and tonic’, she says,
grinning.

‘
Thank you so much’,
Khosla says. Turning to the waiter he orders, ‘lime water for the
lady here- sweet. And for this…this…this…’ he fumbles, waving
towards me, not able to bring himself to call me a
gentleman.

‘
I will have another tonic
water, thank you’, I butt in, easing the old man’s agony
somewhat.

‘
And I will have the
frothiest- in a jug. Make that two - one after the other, not
together- get it? And lunch after’, he says. ‘What’s for lunch by
the way?’

‘
Why does
usual
sound suspiciously
like
vegetarian
to
me? Is this a
Tuesday
?
Tuesday
sounds like
usual
to me! The standard lame excuse whenever I ask for something
to choke these arteries or wet these whiskers with’! Khosla
laments, peering over the frayed menu card.

‘
Have you got meat on the
table, man; debris of anything that once chewed cud and parted the
hoof; anything other than green leafy plants? Come on, tell me!’ He
says, tugging at the waiter’s sleeve.

‘
Why don’t you drag your
lazy person to the shooting range once in a while, eh?’ Khosla
says, training his guns on me now. ‘Afraid to get a tan?’ he
laughs.

‘
He’s not a mornings
person, papa’, Aarti says, leaping to my defense. ‘ He runs when
the sun is down and the shadows are up’.

‘
Running is no sport.
Where’s the contact… the hand-eye coordination? And what’s this
silly job you’ve landed- sports management- what’s
that?’

‘
The only stars in sport
in our country are cricketers, whether Indian or foreign. And you
never know who’s playing on whose side. One minute he’s whipping
sixes and the next, he waves a hanky and gets his feet caught up in
his stumps. You stay away from them poster boys and city lights -
mind it’, he says, banging the mug on the wooden table, spilling
some of his frothy. ‘Want some’, he asks me generously.

‘
Travelling, he says- bah!
Nothing like the old spirits to ease a weary traveller on his
way’!

Aarti keeps jabbing me under the table with
her foot, biting her straw and smiling, enjoying my discomfort.

‘
Stop it’, I say, when the
foot raises my trouser edge till my knee.

‘
Nothing? And
nothing,
am I to believe,
are your plans young man?’

His directness throws me off balance. I
would have thought the old man would raise the topic of our
marriage a little more delicately.’ Sir… I need time to think this
over. Err…I want to stand on my feet before… later, perhaps’.

A dark cloud passes over Aarti’s pretty
features as I fumble for words.

‘
What are you saying? All
I’m asking is where you are going to stay! You need time to think
what over- chump?’

I am leaving the same day for Mumbai, while
Aarti is fetching up a couple of weeks later, as per our differing
joining schedules. She is going to drop me at the station today.
The lunch is a farewell from the sullen old man.

We round up the flesh and bones at lunch,
and bid goodbye to the old man who sulks that his daughter should
drive in the rotten traffic for someone as inconsequential as
I.

‘
Don’t go on the platform,
drop him by the roadside’, he advises his daughter and pulls
away.

‘
Here we are…’ she says,
as we drive into the station and park in the shade. She looks at me
searchingly.

I run my fingers through her soft tresses
tumbling about the high, ivory cheekbones and determined chin, and
say nothing.

‘
You took a lot of time
back there, Arjun. What did you think he was talking
about?’

‘
I don’t know Aarti! I
never expected it from him. I…I thought he was talking about us. I
never thought of us that way’.

‘
Then which way did you
think of us, young man’?

I remain quiet. She suddenly breaks into a
giggle, easing off when she sees that I am upset about having
probably hurt her. ‘Don’t worry Arjun, I will always wait’.

I haul my bags off the
rear seat and blow her a kiss. She smiles, puts on the sunglasses,
flicks a tear off their rim and drives off, leaving a small lump
in
my
throat. I
don’t know how I am going to cope with being away from her for so
long- a complete month!

As the train pulls away from the station I
think of what she’d said. I suddenly realize I can’t afford to take
chances with us; leaving things in a limbo just because some things
were left unsaid. True, I wasn’t sure of what to say to the old
man, but I am pretty certain of what I have to do and what I want.
I had never confessed my love, or she hers, but we always knew it
was always there- rock solid and eternal.

A foreign tourist sitting across from my
bunk excitedly clicks pictures of our bold men and women squatting
on the railway lines, baring all and answering to the pressing call
of nature. When she stops I know it is safe to open the curtains
and look outside.

I call Aarti up when I get the tower’s
reception.

‘
Where are you?’ she
squeals.