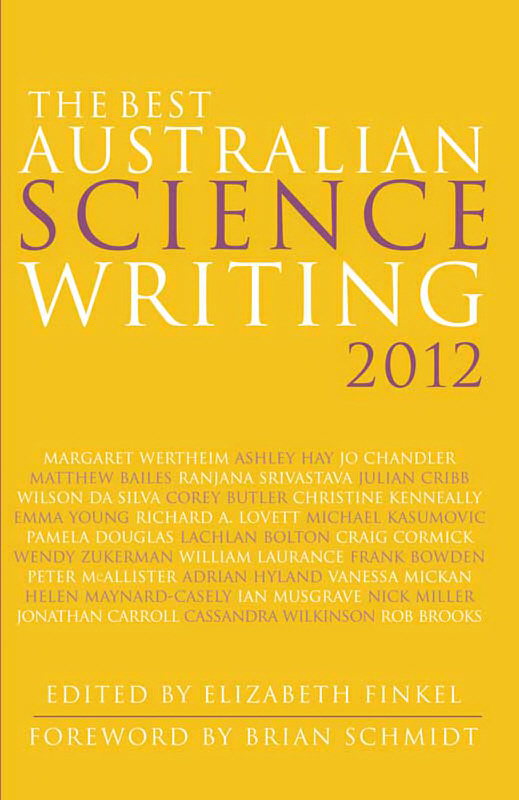 E
LIZABETH
F
INKEL
holds a PhD in biochemistry and spent ten years as a professional research scientist before becoming an award-winning journalist. She has written for
Science, The Lancet, Nature Medicine, New Scientist
and
The Age
, among others, and has broadcast for ABC Radio National. She is the author of
Stem Cells: Controversy at the Frontiers of Science
and
The Genome Generation.

This book is copyright. While copyright of the work as a whole is vested in University of New South Wales Press Ltd, copyright of individual chapters is retained by the chapter authors. Apart from any fair dealing for the purpose of private study, research, criticism or review, as permitted under the Copyright Act, no part of this book may be reproduced by any process without written permission. Inquiries should be addressed to the publisher.

This project has been assisted by the Copyright Agency Cultural Fund.

Introduction: Masters of the popular treatise

Neutrinos and the speed of light â¦ not so fast

Under the hood of the universe

The rise and fall of infant reflux

Earthquakes: When the world moves

Seven billion reasons to be a feminist

The evolution of the inadequate modern male

Doctor's orders: Debunking homeopathy once and for all

Life in Lake Vostok? The link between Antarctica and extra-terrestrials

The doctor is in

A dream of goldfinches

In 2012, NewSouth Publishing launched a new annual prize for the best short non-fiction piece on science written for a general audience. The Bragg UNSW Press Prize is named in honour of Australia's first Nobel Laureates, William Henry Bragg and his son William Lawrence Bragg. The Braggs won the 1915 Nobel Prize for physics for their work on the analysis of crystal structure by means of X-rays. Both scientists led enormously productive lives and left a lasting legacy. William Henry Bragg was a firm believer in making science popular among young people, and his Christmas lectures for students were described as models of clarity and intellectual excitement.

The Bragg UNSW Press Prize is supported by the Copyright Agency Cultural Fund. The winner receives a prize of $7000 and two runners-up each receive a prize of $1500. The shortlisted entries for this year's inaugural prize are included in this anthology.

Peter McAllister,
The evolution of the inadequate modern male

Winners will be announced on 22 November 2012 at
newsouthpublishing.com/scienceprize

PROFESSOR BRYAN GAENSLER
is an award-winning astronomer and best-selling author who is internationally recognised for his groundbreaking work on interstellar magnets and cosmic explosions. A former Young Australian of the Year and Harvard professor, Gaensler is currently a Laureate Fellow at the University of Sydney, where he directs the Centre of Excellence for All-sky Astrophysics. He is the author of
Extreme Cosmos
(NewSouth 2011).

PROFESSOR MARTIN GREEN
is a Scientia Professor at the University of New South Wales and Executive Research Director of the University's Photovoltaic Centre of Excellence. His work has resulted in many major international awards, including the 2002 Right Livelihood Award, commonly known as the Alternative Nobel Prize, the 2007 SolarWorld Einstein Award and the 2010 Eureka Prize for Leadership. In 2012, he was appointed a Member of the Order of Australia in recognition of his contributions to photovoltaics and to photovoltaic education.

PROFESSOR MARILYN RENFREE
is a reproductive and developmental biologist and Secretary, Biological Sciences, and Vice President, of the Australian Academy of Science. She has held NHMRC, ARC, Fulbright, Ford Foundation and Royal Society fellowships. She is a Fellow of the Australian Academy of
Science, a Laureate Professor of the University of Melbourne, and was an ARC Federation Fellow between 2003 and 2008 and Director of the ARC Centre of Excellence for Kangaroo Genomics from 2008 to 2010.

PROFESSOR NADIA ROSENTHAL
is a molecular biologist and Founding Director of the Australian Regenerative Medicine Institute at Monash University and Scientific Head of the European Molecular Biology Laboratory (EMBL) Australia. She obtained her PhD in 1981 from Harvard Medical School, where she directed a biomedical research laboratory, serving for a decade at the
New England Journal of Medicine
as editor of the Molecular Medicine series. She headed the EMBL-Rome campus from 2001 to 2012 and held a Professorship of Cardiovascular Science at Imperial College, London. Professor Rosenthal is an NHMRC Australia Fellow.

Remembering the Bones by Frances Itani
Get Smart 6 - And Loving It! by William Johnston
Shooting the Rift - eARC by Alex Stewart
Life After Forty by Dora Heldt
The Cauldron by Jean Rabe, Gene Deweese
The Nightingale Nurses by Donna Douglas
The Christmas Letters by Lee Smith
The Bricks That Built the Houses by Kate Tempest
Light Switch by Lauren Gallagher
The Lady and Sons by Paula Deen
Our partner