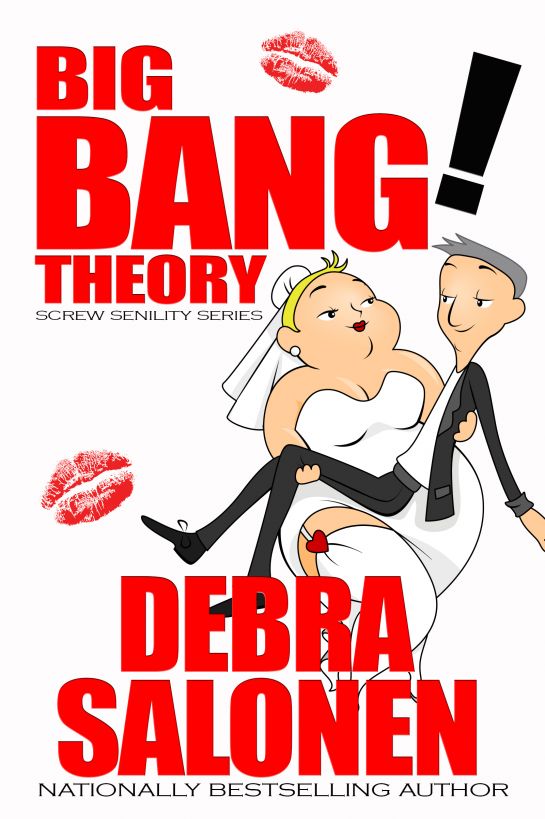 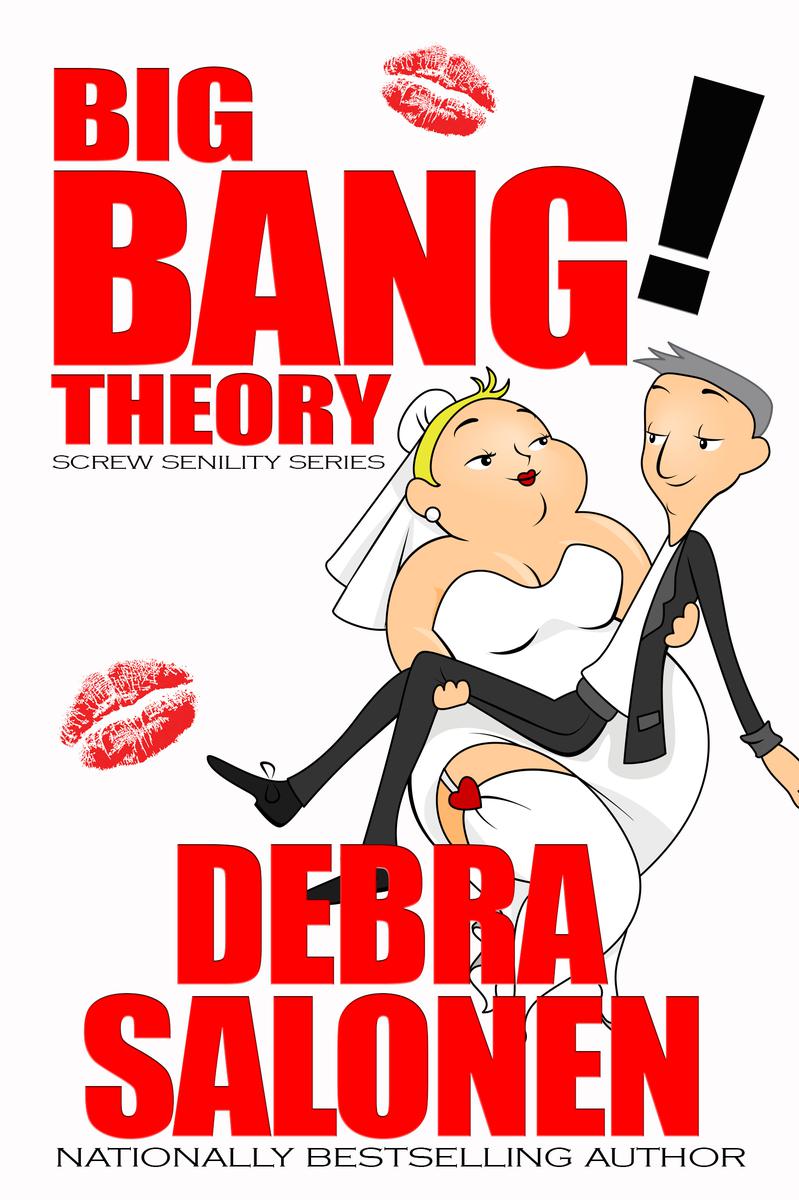 This ebook is licensed for
your personal enjoyment only. This ebook may not be re-sold or
given away to other people. If you would like to share this book
with another person, please purchase an additional copy for each
recipient. If you’re reading this book and did not purchase it, or
it was not purchased for your use only, then please return to
Smashwords and purchase your own copy. Thank you so much for
respecting the hard work of this author.

Book 4 in The Screw Senility
Series

"I'm calling this the
Moooove Your Mammaries exercise. Press your elbows behind your
back. Then reach across your body and punch. Left. Right. Repeat.
Mooove those Golden Boobies, ladies."

Judy's throat hurt from
shouting over the Pink song blaring from the speakers. "You gotta
get up'n try. Try. Try," she mouthed with every punch.

She had yet to figure out
the P.A. system at the gym. Her top priority this week had been
timing her routines. Twice, she'd gone over the allotted hour and,
boy, did she hear about it from the dozen or so sexagenarians who
attended the newly created Judy Banger's Golden Sneakers
Workout.

She'd learned two important
rules when leading a class: count correctly--if her mind wandered
and she lost track of the reps, someone would call her on it--and
never, ever, cause her Sneakers, as they called themselves, to miss
the bus back to Heritage House, where the majority of her class
lived.

Two weeks earlier, when
Judy admitted to her fitness coach Kelly that she'd lost her job
and would need to cut back on expenses--including the cost of her
gym membership, Kelly had suggested Judy start leading a class of
her own. "You're a natural, Judy. I'm a qualified trainer for the
AARP Senior Fitness program, but with my college class schedule, I
don't have time to take on any more sessions. I'll train you, but
it will be up to you to build a following. You could make huge
brownie points with the boss if you recruited people from the Old
Folks home where you used to work."

Ron and Bev, Judy's former
employers at Heritage House, would have been appalled to hear their
beloved independent living center called an "Old Folks home," but
Judy understood. To someone in her mid-twenties like Kelly, anyone
Judy's age--fifty-four--was far enough over the hill to be nearly
invisible.

"Stretch, ladies. Make a
fist. Deliver that knockout punch. Push yourself. Use those muscles
or lose 'em."

Judy couldn't believe how
many of Kelly's kitschy rah-rah catch phrases and bumper-sticker
slogans insinuated themselves into her jargon once she started
operating at the head of the class. "Five. Four. Three. Keep going.
Done." She gave her students two thumbs up then motioned for them
to put away the weights they'd been using. "Grab a drink of water
before cool down. Great work, everybody. How do you
feel?"

Judy zeroed in on a
familiar voice. Prudence O'Riley. The only one wearing hot pink
Lycra capris with a baby blue sports bra and white tank that
read:
Perfectly Fine Bad
Example
.

"When do you leave on your
trip?" Judy asked her best friend.

"Iceland?" one of the other
members asked. "Are you going with a tour?"

Judy snapped her fingers to
get everyone's attention. "Hustle, ladies. You don't want to miss
the bus. Straddle your chairs, sit up straight and inhale
deeply."

After months of working out
with Kelly three mornings a week, Judy had this part memorized. She
could call the moves without thinking about what came next.
Unfortunately, freeing up brain space triggered a slideshow of the
recent events that landed her in this part-time, minimum-wage job.
Buddy Fusco's naked body stretched out dead in her bed. Jed
Blassingame wearing only his tool belt, a few brush strokes of
Sunrise Alabaster--her bedroom's new paint color--and a condom.
Pru, in a leopard print push-up bra and thong cracking a whip named
Gerald above the heads of Lewis Fusco--Buddy's son who'd threatened
to sue Judy for his father's wrongful death--and Officer Fletcher
Canby--completely out of uniform and looking at Lewis as if he were
a lollypop that needed licking.

How the heck did my life
get so complicated?

Buddy. Lewis. Fletcher.
They popped into my life and turned things upside down...and then
poof! Gone. Every one. Even Pru was leaving. And here I am. Broke.
Career in the toilet. Alone.

"Okay," she cried hoping
her voice didn't crack from the emotion building in her chest.
"Extend your arms then reach around and pat yourself on the back.
Well done, everyone! See you Monday."

She watched the dozen or so
women in their late-sixties and early seventies collect their water
bottles and purses. Judy had been delighted by the response to the
flier she’d posted at Heritage House. Most of the women were bored
to tears with retirement and welcomed the diversion. A few came at
their doctor's behest, some because their insurance paid for their
gym membership and they'd be damned if they'd pass up something
free. Judy could see herself in their shoes in the all-too-near
future. Although, she had to admit, the more she worked out the
younger she felt.

The real trick, she
realized, would be finding a job that covered her living expenses
while still allowing her time to teach this class.

"Pru, I'll be in the office
checking my email," she told her friend, who was chatting with a
young bodybuilder. Did it matter that, Gerald, the so-called love
of Pru's life, had returned with apologies and tickets to Iceland?
Apparently not. Pru never passed up a chance to ogle eye
candy.

Judy had to force herself
not to roll her eyes. Pru didn't have an ounce of extra fat on her
body. And she was far too ADD to work out on a regular basis, but
Judy supposed the idea of someone proving on paper how perfect she
was for her age held a certain appeal. Judy still hadn't allowed
herself to be taped.
Maybe after I drop
another pant size
, she thought, tugging on
the surprisingly loose waistband of her workout pants. This
exercise thing seemed to be working.

She plopped her slightly
less bulgy butt on the padded stool behind the chest high counter
and pulled out her phone. She'd emailed at least half a dozen
resumes in the past week. She'd also interviewed for a desk job at
a small construction company Jed had recommended. The people were
pleasant enough but the work seemed tedious, at best. Not that
she'd turn down a decent offer, but a part of her was convinced
they'd only agreed to see her as a favor to Jed--and because they
wanted to check out the older woman in Jed's life.

The older woman who
used
to be in his
life.

Jed hadn't made their split
official, but from his texts and calls Judy sensed someone new had
caught his fancy. Someone in Reno. Or Tahoe. Judy couldn't remember
exactly where he was working. And that was okay, too. She'd always
known their relationship was temporary. In fact, as harsh as it
sounded to admit, the transitory aspect might have been the best
part. She adored the man, but the nine-year gap in their ages
sometimes felt like a lifetime.

She tapped her email app
and waited. Her knock off phone surfed the telecommunication
satellites at three-legged dog speed compared to Pru's
hot-off-the-Chinese-black-market greyhound version. The woman had
an uncanny ability to choose men who couldn't wait to provide for
her every need and whim.

Her palms tingled. She
tried crossing two fingers but couldn't get the first email to open
that way. She didn't recognize the addy.

With good reason, she
thought stifling a sigh. A reprimand from her credit card company.
She'd sent a token payment. Apparently, too late and too little to
satisfy their greedy, attention-to-detail needs.

"Damn." She'd be making up
for this blow to her credit rating for years to come. Hell, her bad
credit reputation would probably outlive her. Something her mother
once predicted. "If you don't learn how to handle what little money
you're going to make in your life, Judy, you'll wind up in the
poorhouse."

Not if I move in with you
and Nancy.
Judy's older sister--the perfect
one--and her equally perfect husband, Pete, lived in the Bay
area--a comfortable three-hour drive that none of them made on a
regular basis.

The thought brought up a
sour taste from deep in her gut. Judy hadn't spoken to any member
of her family since this whole Buddy Fusco fiasco began. Partly out
of embarrassment, but mostly to avoid giving Mom and Nancy the
satisfaction of being right. "Didn't I always tell you Judy would
never amount to anything?" she could picture her mother saying.
"You did, indeed, Mommy. And how right you were," her sycophant
sister would reply.

I have nothing to feel
guilty about, Judy told herself. Phone lines went both ways. They
hadn't called her, either.

She opened the second
email, saving the last--a name she did recognize--for
last.

"Dear Mr. Bangur, thank
you for your interest in our company. We are not currently hiring
account representatives, however, if you'd be interested in joining
our independent owner's program, we offer service plans with easy,
affordable, no money down buy-ins."

"No, thank you," she
muttered, clicking the delete button with relish.

Just for the Summer (Chasing Carolina #0.5) by Danielle Jamie
Finding Myself in Fashion by Jeanne Beker
Moon Kissed by Aline Hunter
The Counterfeit Gentleman by Charlotte Louise Dolan
The Waters Rising by Sheri S. Tepper
The Dead Walk The Earth (Book 3) by Duffy, Luke
Wild Roses by Miriam Minger
The Risen: Remnants by Crow, Marie F
Winter's Fury - Volume Two of The Saga of the Twelves by Richard M. Heredia
The Storms of War by Kate Williams
Our partner