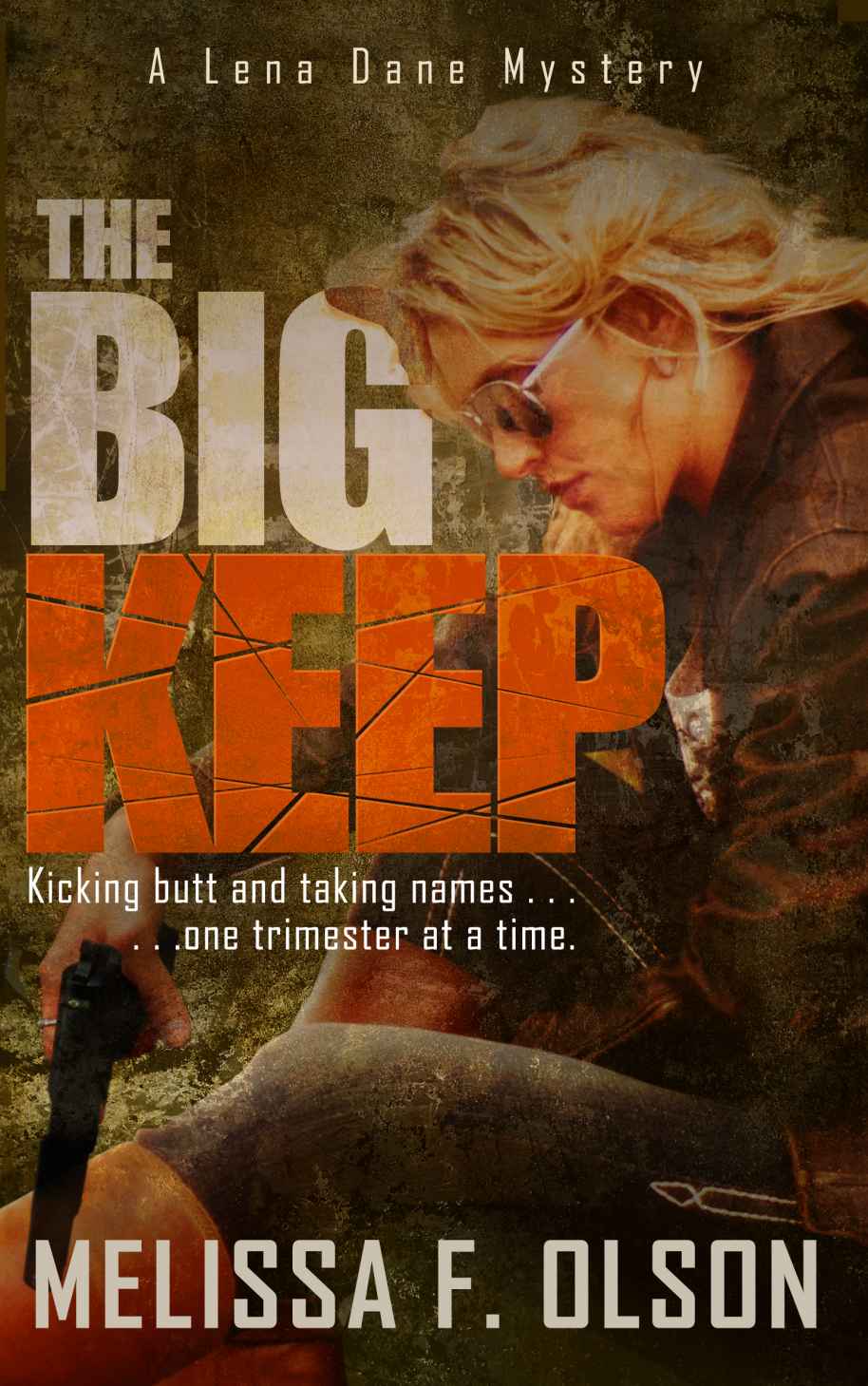 5. You Really Are a Detective

6. Kind of a Douchebag

12. The Pickle on the Crap Sandwich

13. Your Own Personal Mission

14. Something Different About You

15. We Trust Our Residents

19. Especially In Your Condition

21. Out There for the Taking

24. The Only Thing Holding Him Up

25. Congratulations Are In Order

33: Sorry About Your Professionalism

35. He Could Pay Attention

37. Something You Still Need

This ebook first published in 2014 by Westmarch Publishing

All Rights reserved, including the right to reproduce this book or portions thereof in any form whatsoever without prior written permission by the author.

This is a work of fiction. Names, characters, places, and incidents are either the product of the author’s imagination or are used fictitiously.

This ebook is licensed for your personal enjoyment only. This ebook may not be re-sold or given away to other people. If you would like to share this book with another person, please purchase an additional copy for each recipient.

This one’s for my girls, of course.

I think we can all agree that there’s something truly insidious about pregnancy tests.

As I stared at mine, which was the really expensive digital kind that just says “Pregnant” or “Not Pregnant” –in my case, the former– I felt certain that the stupid things were part of some kind of evil machinations to screw up women’s lives. They’re like tiny little sticks of destiny, but instead of putting in a quarter or saying some magic words, the only way to activate them is to pee all over them.

Come to think of it, I’d probably be evil, too, if my sole purpose in life was to get peed on.

I sighed and tossed the test onto the desk in front of me, with the vague sensation that I should be doing something—jumping around or crying or at least calling my husband, Toby. People in this situation are definitely supposed to react, at least according to my admittedly television-based research.

Instead of any of that, I spun my chair around in circles, thinking and trying not to think. Blank, I told myself. The word that you’re feeling now is blank. I stared out the window behind my desk. Dane Investigations, my one-woman PI firm, is located in one of the in-between neighborhoods of Chicago, not quite the suburbs and far enough from the Loop to be considered out of downtown. It’s a decent enough office, sharing the building with only one other company, a small custom book binding plant, but the view from my office window isn’t exactly breathtaking. My window faces busy Division Street, with center stage occupied by a McDonald’s and two dingy gas stations.

But I just sat there for a solid three minutes, numb and hollow and hazy. Empty, except for maybe a little bit of embarrassment. I am a frickin’ private investigator. How had I missed being pregnant? I gave the pregnancy test an experimental wiggle, like maybe I could shake the baby hormones out of the thing, but the little window refused to change. This was actually happening.

I jumped, startled into perfect posture. I slid the pregnancy test off my desk and into the trashcan by my legs, looking up to see my assistant framed in the doorway.

“Jumpy much?” Bryce said, grinning at me and gliding into the room with a manila file folder in hand. Bryce was Asian, a little portly, and gay as the springtime. Today he was wearing a button-down shirt, sweater vest, and his trademark pink Chuck Taylor sneakers.

I stuck my tongue out at him. “Who’s the client?”

He passed me the file, which contained only my usual new client intake form. The handwriting on the page was wild and uneven, not unlike my own. “Actually,” Bryce remarked, “it’s a kid. Fourteen years old, looking for his dad. It’s kind of a strange case, for being so typical.”

“Very poetic.” I slid my legs back to the floor and leaned forward to read the form. I picked up a pen and twirled it around my fingers, not adding any notes of my own just yet. “Nathaniel Christianti, that’s a mouthful.” He was indeed fourteen, and was looking for his biological father, who dropped off the grid a decade earlier.

I glanced up. “You did a pre-interview, right?” Bryce nodded. We don’t get many walk-ins, and a number of the ones we do get are cranks –people who want me to find Jimmy Hoffa, or prove that a state senator was out to get them personally, that kind of thing. Bryce, who is just naturally chatty, can weed out the crazies faster than I can. “Okay, so why is the kid just going after the biological father now? And why isn’t he here with a parent?”

Bryce shrugged. “His mom’s dead. He seems to genuinely like the stepfather; maybe he just doesn’t want to hurt his feelings.”

“Hmm.” There wasn’t much else on the intake form, but I trusted Bryce’s assessment that this was a case we should take. “Go ahead and send him in.”

Bryce nodded briskly, and then his face turned hesitant.

“Something else?” I asked, eyebrows raised. It was rare for Bryce to look unsure of himself. It generally only happened when there was a problem with his kid sister, or when–

“You got another package,” he said, echoing my thoughts.

I sighed and tossed the pen on the desk. “Is it ticking?” He shook his head. “Did you open it?” Wincing, he nodded. We both knew he wasn’t supposed to open the suspicious packages that I received every year right around now, but we also both knew he was going to do it anyway. I’d given up warning him off it. “Did they at least get a little creative this time?”

Bryce shook his head again. “They’re back to the Barbie dolls.”

I sighed. “Put it in the file cabinet with the others. I’ll call CPD tomorrow morning.”

“As you wish, my liege.” Before he left the room Bryce gave me a low, theatrical curtsy, complete with imaginary skirts. I smiled after him.

A moment later there was a knock on the door and a reddish-brown head poked in, trailed by a lanky, uncertain-looking body. Nate Christianti stepped into my office, hesitant green eyes flicking around at my massive writing desk, the two chairs, the Oriental rug, and the framed still photo of Bogie in The Maltese Falcon that hangs on the wall behind my desk. He wore a polo shirt and jeans, probably from the Gap or Old Navy or one of the other mass-produce mall stores, and just generally looked...completely unremarkable. High school is supposed to be all about labels, but with the right accessories and enough practice this boy could end up being the second string quarterback, the star of the chess club, or the lead in the school play. Right now, though, he looked like a paper doll that had not yet been granted a personality.

I smiled warmly, rising to lean across my overworked desk to shake his hand and motion to the open chair. “Hi, Mr. Christianti, I’m Selena Dane. Is it okay if I call you Nate?”

“Um, yeah, that’s cool.” His voice was low and unsure, as though he doubted his control of it.

“Great. And I’m Lena.” I sat back in my desk, picking up my pen and a pad of paper to jot down notes. “I saw the intake form you filled out, but maybe you could just walk me through what’s going on.”

He bobbed his head like a bird. “Well, I’m trying to find my—my biological father, I guess. He sort of disappeared off the earth when I was five.” One hand rose to twist itself into the hem of the polo shirt.

He didn’t seem to know how to continue, so I prompted him gently, “And you were living with your mom and stepfather?”

“Yeah. Yes. My mom died when I was nine, she was in a car accident. She left me with my stepfather, and he’s been my dad pretty much all my life.” As tactfully as possible, I gave him a questioning look, and he caught the meaning. Blushing, he added lamely, “I’m getting older, and I’d just like to know about where I came from.”

There was more to that story, or I was the Duchess of Cook County, but he wasn’t ready to tell me, so I didn’t press yet. “Does your stepfather know you’re here?” I asked, watching him closely for signs of a lie. The last thing I needed was to get in trouble for taking money from a minor.

But Nate’s nod was firm, his eyes never leaving mine. “Yes. He’s very supportive of trying to find Jason – Jason Anderson, that’s my birth father. I got some money from insurance when my mom died, and Tom and I agreed we should use it to try to find him.”

“Okay...” I said, nodding. “What can you tell me about Jason Anderson?”

Nate leaned forward so he could pull a small notepad out of his back pocket. With his eager expression and tiny notebook, he looked like Jimmy Olsen. I tried not to smile.

“Okay. I’m just gonna use first names, so it’s easier to understand,” he began. “My mom, Sarah, and my father, Jason, were married sixteen years ago, here in Chicago. They had me fourteen years ago, obviously. They were divorced four years later, and Jason didn’t have much contact with us. Sarah married Tom when I was seven, and we both had our last names legally changed to his, Christianti. Her accident happened when I was nine. Before she died, Sarah told Tom a little bit about Jason, but not that much. Tom knows he was a writer, and that he wrote under a pen name. I have a picture of him.” Flipping through his notebook pages, he pulled out a battered wallet photo and handed it over. It was a studio shot of a 30ish man holding a tiny baby – Nate, I assumed. The guy was the epitome of average: medium height, medium build, neither handsome nor ugly.

“My mom’s folks and Jason’s parents are dead– I mean, deceased, and Jason was an only child like my mom.”

I blinked. “Okay. I’m impressed with what you’ve got so far, Nate. I don’t suppose you have his social security number, though?” The boy shook his head.

“Do you know where Jason grew up?” I asked. “Was he from Chicago?”

“I don’t know. My mom never mentioned it to me when I was a kid, and we didn’t really talk about Jason much once she married Tom. It was like, okay, I have a dad now, so I don’t need to worry about that other guy.”

Her Russian Beast: 50 Loving States, New Mexico by Taylor, Theodora
Ghost of a Chance (Banshee Creek Book 2) by Gonzalez, Ani
Threshold Resistance by A. Alfred Taubman
The Wild Lands: Legend of the Wild Man by Joe Darris
A Perfect Love by Lori Copeland
The Secret by Kate Benson
Munich Signature by Bodie Thoene, Brock Thoene
Better Off Dead by Sloan, Eva
The Dragon and the Dreamwalker (Elemental Series) by Rose, Elizabeth
'48 by James Herbert
Our partner