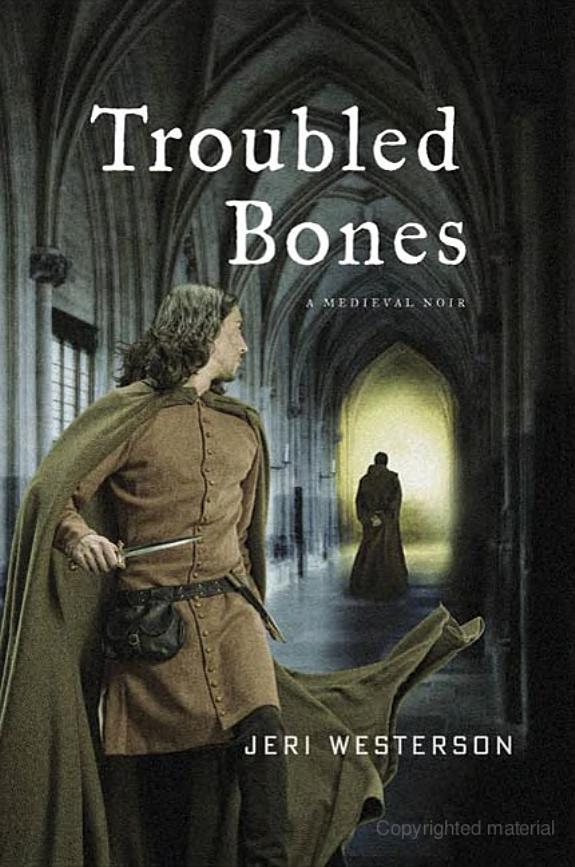 To Craig, who keeps my bones untroubled

Travel across the pond for every little bit of research? Alas, no. And so I rely on those generous people in archives without whose help I would be lost. One such person I wish to thank is Marion Green from the Canterbury Archaeological Trust who indulged me and sent me all manner of information, floor plans, and other helpful items via air mail. Another thank you goes out to pal Marie Meadows for helping me with Crispin’s coat of arms and his motto. Thanks also goes to my stalwart Vicious Circle of Ana Brazil, Bobbie Gosnell, and Laura James; the indefatigable Joshua Bilmes; the incomparable Keith Kahla; and the undefeated and oft long-suffering Craig Westerson.

“Mordre wol out, that see we day by day.”

“
WHY’D YOU HAVE TO
take me along, Master Crispin?” complained Jack Tucker, gripping the horse’s mane as his body jerked with the rouncey’s gait. The boy looked up sorrowfully through a mesh of ginger fringe. “Shouldn’t someone keep watch of our lodgings back in London? Shouldn’t I have stayed behind?”

“Master Kemp can keep good watch of his own tinker shop, I should think,” said Crispin. “And if you ever wish to follow in my footsteps, you must accompany me when I have a paid assignment. As you know, such assignments are few.”

“I’d rather follow in your footsteps at that, Master, than ride this beast. If God had wanted Man to have four feet He’d have created Adam with them.”

Crispin’s left hand lazily held the reins. “Jack, you’re fighting him. Roll with the gait. Become as one with him.”

Chuckling, Crispin raised his eyes to the road. The walls of Canterbury drew closer and rose above the distant copses. It wouldn’t be long before they could finally get some food and a warm bed. Though he appreciated being on a horse once again, the constant drizzle had made their two-day journey from London less than comfortable.

“Why should the archbishop want you to do this thing, sir?” Jack asked.

Crispin gripped the reins. Tension flickered up the muscles in his arm. “The letter delivered to the sheriffs was frustratingly vague. All I know is that it seems to be a matter of Saint Thomas à Becket’s bones.”

Crispin made a sound in his throat but said nothing. He couldn’t help but feel a kinship for the martyr. Thomas à Becket had been his own man, to be sure, saint or no.

“But we did leave London rather hastily,” Jack went on. “Why, sir, if you hate dealing with relics so much, were you in such a hurry to do this task?”

“I will be paid well for it. I’ve already received two shillings. Four days’ wages isn’t bad for work not yet done.”

“True. But I’ve never seen you hurry for no one, let alone a cleric.”

Crispin heaved a sigh. He could ignore the boy, tell him to be still and to mind his own business, but after only one short year of knowing the ginger-haired lad, he knew it was pointless. “The sheriffs gave me a choice,” he said at last. “Follow the bidding of the archbishop or go to gaol.”

Crispin adjusted on his saddle. “It seems I might have gotten into a scuffle at the Boar’s Tusk.”

“A man was bedeviling Mistress Langton! Should I have stood by while he insulted the tavernkeeper?”

He pulled his hood down, shivering with a cold wind. “I might have been. The crux of the matter is that the man was a courtier. And I, er, might have … struck him.”

“God blind me. Then it’s a wonder they didn’t just hang you.”

They fell silent as they reached the city’s gates and then wended their way through narrow lanes, some little wider than the horses’ flanks. The late-afternoon light filtered down through the valleys of Canterbury’s shops and houses. Their second and third tiers overhung the streets, cutting short the weak light angling through the spring mist.

They found an inn at the end of Mercy Lane, just a bowshot from Canterbury Cathedral, and Crispin left it to Jack to stable both horses and secure a room.

Standing alone at the base of the steps to the great arch of the cathedral’s west door, Crispin brushed the mud from his coat. There was little he could do about the state of his stockings with their mud and holes, but surely the archbishop was aware of his situation. After all, he’d asked specifically for Crispin himself.

He climbed the steps and entered the vestibule. Cold stone surrounded him while the stained-glass windows cast rainbows on the floor. The nave opened before him, flanked on either side by a colonnade of impossibly tall stone pillars upholding ribbed vaults. A labyrinth of scaffolding clung to the nave’s pillars with spidery fingers of poles and ropes. The church’s reconstruction had been under way for years, yet didn’t seem any closer to completion since Crispin had last visited nearly a decade ago. While masons worked, showering the nave with stone dust, artisans continued painting the stone runners, spandrels, and corbels in elaborate colors and stripes. The nave was alive in color and gold leaf. Every corner, every inch of every carved bit of stone smelled of new paint and varnish.

He walked across the stone floor, his boots echoing. When he turned at the quire, he made a nod toward the northwest transept archway into Saint Benet’s chapel, a miniature church within the large cathedral.

The place where Becket was murdered.

He moved on past the quire on his right and then ascended another set of steps—the pilgrim’s steps—to the Chapel of Saint Thomas, its own little parish of occupied tombs and tombs yet to be occupied.
Always room for one more.
He couldn’t help but turn his glance to one tomb in particular. It was overhung with a canopy of carved wood covered in gold leaf. He paused and walked forward to study it.

A latten knight lay with hands raised in prayer over his chest. A crown encircled his helm. He did not lie with eyes closed but stared upward at some unseen paradise … or possibly a battle, for to the silent knight, Paradise and Battle might very well have been one and the same.

For a long time, Crispin stood and stared at the tomb and at the polished figure of Prince Edward of Woodstock. He crossed himself, studied the face of the man he had known well, and finally turned from the sepulcher.

A drowsy shuffle of monks echoed somewhere in the church.

Crispin turned and stood for a moment, absorbing the sight of Becket’s shrine in the center of the chapel. The chapel’s stone pillars created a circle about Crispin and shone golden with the afternoon sun streaming in from the many windows. Raised up on stone steps, the shrine was taller than a man. A stone plinth supported the wooden base, itself resplendent with carved arcades and fine decoration, gold-leafed, painted. As fine as any throne. Set above it all was a finely wrought wooden canopy hiding the gold-and-jewel-encrusted casket in which Becket’s remains lay. The canopy was a proud structure of carvings, gold leaf, and bells. Ropes were fastened from the canopy to the center boss on the ceiling. By pulleys and wheels, the canopy could be lifted to reveal the casket’s magnificence—for the pilgrims who paid their fee.

Crispin frowned. His eyes searched the shadows. The shrine looked the same as it had probably looked for two centuries.

He turned to go when the sound of voices and scuffing feet stopped him. Pilgrims. Then monks appeared from the shadows and positioned themselves before the ropes and pulleys, ready to reveal Becket’s casket. His heart fluttered. How many times had he seen this tomb himself? But he was just as affected as the first time when he was a boy. The archbishop could wait. He wanted a look at Becket’s tomb. Just another pilgrim in the crowd.

Steps approached and the voices hushed. The pilgrims, here to see Becket’s shrine, moved along the north ambulatory, gawking at the images of Saint Thomas’s miracles depicted in the stained-glass windows. They were a varied flock, as Crispin expected. Travelers came from all over the kingdom to see Becket’s bones. Some looked to be clerics from other parishes, a priest in rich robes, and two demure nuns in dark habits. A man of wealth was flanked by what appeared to be two tradesmen. A round-bodied woman in a fine gown and cloak stood in the center of the crowd, a look of concentration on her face as she stared at the tomb as if willing it to give up its secrets, while two men, one thin and the other stout, skulked behind the other pilgrims, whispering to each other.

The two monks who stood by the ropes stared suspiciously at Crispin before they set to work cranking the canopy away from the casket. Slowly, with the sound of the rope squealing over the pulley, and with bells tinkling, the canopy lifted higher and the first motes of light struck the casket’s gold. The sun revealed it, brushing along its box of carved pillars.

Crispin stood off to the side, waiting in the shadows for the pilgrims to pass. The visitors murmured and were slowly ushered forward one at a time by two monks.

Out of the silence, a sharp voice rang out, incongruous in the silent presence of tombs and the ancient stone chair of Saint Austin standing in a shaft of sunlight. “Well, I’ll be damned. Cris Guest!”

It couldn’t be. That unmistakable voice. A sinking feeling seized his gut and Crispin slowly turned.

CHAUCER CLAPPED CRISPIN ON
the shoulder and stood back. “Cris! By God! Let me look at you. I have not seen you in … Holy Mother. How long has it been?”

“Eight or so years,” he answered stiffly.

“Starvation will do that.”