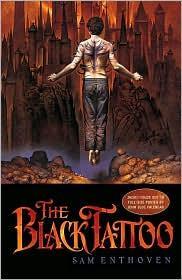 The West End. A little after four in the morning.

At the base of the skyscraper know as
, in the darkness at the end of a dank concrete walkway, something stirred.

The shadows there began to ripple and coalesce.

The dark became a manlike shape of pure liquid black.

Then the demon emerged, taking its first leisurely step toward the woman who stood there watching it.

Hearing that voice again, and the way the sound of it seemed to take shape inside her head like black flowers blossoming behind her eyelids, it was all Jessica could do to stop her legs from trembling.

She'd been so close!

Another few minutes and she'd've made it!

She gritted her teeth and told herself to concentrate.

The demon took another step.

It was clear of the shadows now, and the rainy orange streetlight glinted off its inky wet skin.

Its face was a blank, but she could feel it looking at her.

"You should not have come back," it said.

Slowly Jessica put down the plastic bag full of fourteen years' worth of carefully hoarded tobacco shreds and cigarette ends that she'd been collecting and saving for this moment.

She unbuttoned her filthy overcoat.

And what makes you say that?"

"You must have realized that I can't let you warn them," the demon told her.

"You must have known that if I found you you'd be killed, and what knowledge you possess would die with you — but you still came.

Her hard brown hands lifted fractionally from her sides.

The demon looked at her.

It took one more step—

Jessica wasn't as young as she used to be.

She'd been expecting the demon's charge, but her reactions had slowed over the years since they'd last fought.

When she leaped, with superhuman speed, six feet straight up in the air, flinging herself in a twisting forward roll so tight it left her dizzy, she was, therefore, slightly too late.

Her knackered old trainers clipped the demon's back as it flashed past beneath her.

She was slightly off balance as her soles smacked back onto the concrete — and the first knife she threw as she landed went wide, spanging off the walkway's railing and spinning off into the night.

Smoothly her right hand whipped back and out again, but the demon had already recovered itself; it swatted her second knife out of the air with something very like contempt.

Jessica held her breath as she reached for her third:

the blade crossed the space in a flash of silver and struck the demon in the face, right between where its eyes would have been if it had been a person.

But it was not a person.

Grimly she watched her knife vanish into the glossy darkness, leaving barely a ripple.

The demon didn't even break stride.

With the best speed she could muster, Jessica dived to one side.

She just had time to notice that the demon had anticipated her...

...when she felt a blow that took her breath away.

The concrete wall at the end of the walkway was a clear twenty feet behind her; the blow flung her the distance in less than a second, and she smacked into the wall back-first.

Helpless with pain, she slid to the floor, waiting for the follow-up that would finish her.

But it didn't come.

When she looked up, the demon was watching her.

"Feeling your age, Jessica?" it inquired.

Her bones were aching, and she could taste blood in her mouth, warm and coppery.

She gritted her teeth and got to her feet, keeping one hand behind her back.

Magic
, she was thinking.

she was going to have to use magic.

"I sympathize," said the demon.

As you see" — it gestured at itself with one ink-black hand — "I've taken what strength I can from my current host.

He will not sustain me for much longer."

Behind her, slowly, agonizingly, the air above her palm wobbled, bulged — then a light appeared.

It was a tiny spark at first.

The spark glistened and twinkled as she coaxed it into life, gradually becoming a little brighter, a little stronger with each passing moment.

that Jessica was pouring into it — all of her determination, her power, and her hatred condensed into a single, glittering point.

The spark grew to a sphere, a whirling globe of orange-flecked and sizzling silvery-blue, as the demon continued to speak.

Someone vigorous yet... pliable.

Someone spirited yet suggestible.

In short, someone
young
.

Why
did
you come back?" it asked again, suddenly.

Still Jessica did not reply.

It waved wearily at the hand Jessica still held behind her back.

She brought out her hand and what was inside it—

Already, a thin shell of softer blue was forming around the small globe of light that still danced and whirled over her hand.

Another second and the shell seemed to harden, then
crush
inward, turning the light of the globe to an angry red, then white.

Then, suddenly, the demon was screaming.

Its head tipped back, the glistening liquid black of its jaws gaping so far they seemed to roll and fold back on themselves.

Its body was flailing now, around where the light was hitting it, reaching and flailing as if being blown about in a wind tunnel, and all the time the scream went on and on.

The sound was one Jessica knew well.

She had heard it in her dreams every night for fourteen years:

a sound like paper tearing in your head; an intaken, wailing, braying sound that shot up in pitch like a rocket — a sound like nothing on Earth.

Her amber eyes flashed as she stared the demon down.

Holding the light out in front of her, Jessica walked toward it.

It was reaching for her:

long, liquid-black fingers were grasping at the light, testing her will, checking her strength, but Jessica fought with all her heart, forcing the demon back, step by step.

Without taking her eyes off it, she reached out and picked up her bag.

From her years on the streets, Jessica had learned to make the best use she could of whatever materials came to hand.

Manifesting her power externally for any length of time was exhausting, but certain substances (Jessica had discovered) could be induced to hold magic, storing it up and releasing it slowly like a battery does an electric charge.

She began to pour the bag's contents out on the ground at her feet, a little at a time, as evenly as she could with just one had.

Slowly, steadily, she let the precious stuff fall, shaking it out, forming a line on the concrete between herself and her enemy.

Holding the blazing light above her head, she forced herself to turn her back on the demon as she continued to pour.

her collection of shreds and dog ends flared briefly, then blackened as she completed the protective circle.

She sat down and crossed her legs.

Suddenly, the demon seemed to realize what she was doing.

It sprang toward her in a spreading flood of darkness — swallowing the walls, the rain, the world outside, and everything.

Forcing herself to blank out everything except the light of her will, forcing herself not to think of what would happen if that light went out...

The sound of the door buzzer, long and ugly, ripped Esme out of her sleep.

The dream she'd been having was one she had often:

a long, slow, freezing kind of dream, full of darkness and falling and cold that squeezed stony fingers round her heart.

It was a frightening dream, but in a moment Esme had dismissed it as usual.

She opened her eyes.

Her thick black curly hair had swung forward around her face, which meant she was on the ceiling again, where she always seemed to wake up.

Parting her hair with her fingers, she floated soundlessly to the cushioned floor of her bedroom and walked the two steps to the intercom by the door.

Just as she reached it, it crackled:

her father had reached his first.

"Yeah?" he said, his deep voice managing to convey in that one syllable just how unhappy he would be if the person at the door turned out to have woken him up for no reason.

"Raymond?" said the voice from outside.

There was a pause.

She pressed the button.

Nick was small and thin and dressed in black from head to foot:

he wore a black suit, black shoes, a black shirt open at the neck, and black silk gloves on his hands.

His beard and mustache were as dark and neat as the rest of him, but there were deep lines of worry at the edges of his glittering blue eyes.

He looked older than Esme had been expecting, old and very tired.

She and Raymond had been preparing for Nick's return almost the whole of her life.

"Can I get you anything, Nick?" boomed the grinning giant standing by the table.

Raymond, in contrast to Nick, was massive.

His nose was squashed flat, his ears were out of shape, and he had no discernible neck of any kind, just an immense black beard with wispy white streaks in it, behind which his great bald clump of a head seemed to join straight onto his shoulders.

In the army-issue undershirt he was wearing, his hairy arms looked huge.

His meaty red hands, with their swollen knuckles, were resting easily on the back of a chair.

But Esme knew from the way his fingers were clenching that Raymond was almost as nervous as she was.

Nick took a deep breath and closed his eyes.

Before he spoke, his face seemed to sag inwardly.