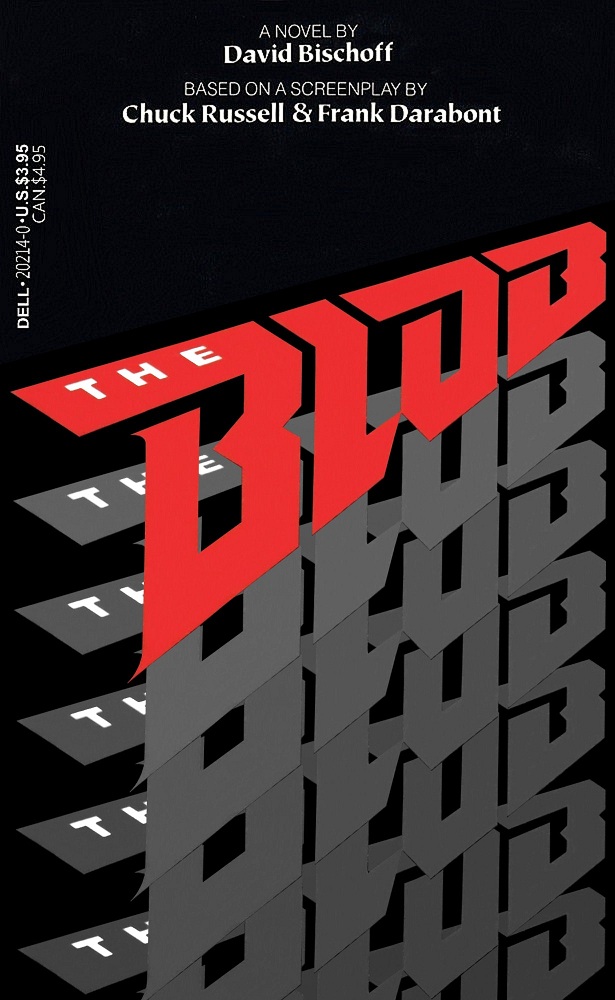 Paul picked up the phone. He dialed 911. “Sheriff, this is Paul Tyler.”

“I’m at the Daniels clinic. An old man’s just been killed out here.”

Paul did not notice the two drops of moisture that dropped onto the desk from the ceiling or the smoke that rose up as the fluid ate into the wood.

“Okay, you just sit tight and I’ll be right out.”

Two more drops fell, and this time Paul noticed. He looked up. It was hanging there, just above the lamp. It looked like a monstrous red slug, glistening with a sheen of moisture. Another spatter of moisture fell onto Paul’s hand, and the droplets burned . . .

He looked back up in horror, frozen . . . and the thing dropped down on him like a cloak of phlegm.

The trademark Dell ® is registered in the U.S. Patent and Trademark Office.

Printed in the United States of America
August 1988

T
he NASA space program has shown us, with its video coverage, and its
National Geographic-type
photos, just how beautiful the Earth is when viewed from outer space.

The Object, however, was blind and could not perceive this beauty.

At a hundred miles up the gravity well of Earth is a powerful force, and it already had the Object in its grip.

But the Object, having no senses, did not perceive the rapid diminishing of its weightlessness. The Object had had a long voyage, but it had no idea of time, or even space, so even as the unseen physical force of gravity began relentlessly tugging it down toward the beginnings of the Earth’s atmosphere, there was no resistance.

As the Object touched the exosphere, a vast stretch of cerulean stitched with swathes of white—the Pacific Ocean with clouds—unfolded beneath it.

The Object noted neither the calm nor the beauty below. It simply did not care.

As the Object passed over a scatter of islands amid this vast sea, the air molecules it struck began to create friction. One side of its casing began to glow—first a soft pink, then a bright cherry, then a vibrant red as ablation commenced.

As it passed over the edge of a great dun-and-green-colored continent, the Object had no recognition that this was North America. Its descent from a wide trajectory had steepened rapidly, driving it at a great velocity beyond the deserts and mountains, the cities and smog, of California.

Into the stratosphere it blazed, its burning descent now giving not only light and heat, but sound as well. No one noticed this sound, however, least of all the Object.

By now the Object was a full-fledged meteor, screaming relentlessly out of space, shrieking through the darkening skies above the western United States. Great mountains reared up below; vast deserts swept out into the realm of twilight; the cities of man, large and small, sparkled to life with electricity as night descended.

As it entered the mesosphere, a blazing, brief new star in the firmament, the Object could have seen its destination—if it had had eyes. If it had had a mind to know such things, it would have known that it would land just on the outskirts of a relatively secluded town in Colorado among the Rocky Mountains, a town called, plainly enough, Morgan City.

As it dived down toward impact, the burning object trailed a long tail of light and heat.

The Object’s exterior was burning away, but it felt nothing.

Inside, however, something stirred.

And this
something
did feel a sensation as the Object hurtled from the sky toward the town of Morgan City just past twilight on this typical quiet night.

It felt a sensation very strong and insistent and demanding.

B
odies clashed beneath the sun of an unseasonably hot day in Morgan City.

The air echoed with the sounds of grunts and groans. Muscles heaved. Sweat mixed with a dash of blood dripped onto the ground as twenty-two teenagers performed the ritual rumble of male aggression known as football.

Paul watched from the bench as the Morgan High Hawks battled the Banning High Raccoons.

I gotta get more
into
the game, thought Paul Tyler, knowing that as a wide receiver he was a vital element of play, especially with the score tied at 14-14 in the fourth quarter. I gotta get my spirit up, get the old team gonzo gutsiness singing in the veins. We gotta win this game, he thought to himself, trying to echo in his heart the wild cheers bellowing from the bleachers. We gotta slaughter those Raccoons! We gotta go home wearing Coonskin caps, dammit!

This game was a grudge match.

There was nothing that the goons on the Banning High School football squad wanted more than to humiliate the Morgan City High football team, to chew off their noses and spit them into the dust, to stomp their bodies to bloody bits with their cleats.

Paul Tyler knew this. He knew also that the game was a play-off, and that the winner of the match would go on to the county championships, something that had eluded Morgan High for more than a decade. But for the life of him, as he sat on that hard bench—draped in shoulder pads and football jersey, clutching his helmet like a talisman—all he could think about was one of the cheerleaders.

And there she was, only ten feet away, a flash of red and blue, and pink thigh. Her name was Meg Penny, and Paul had been watching her do this rah-rah routine all season, but still he couldn’t get enough of it.

“Go, Hawks, go! Remember the Alamo! Try, Hawks, try! Make the Raccoons cry!” they chanted. Incredibly stupid, yes, but that magnificent female body squeezed into that skimpy outfit was nothing to laugh at. Paul especially liked the way her long chestnut hair bounced over her shoulders and back, a curly fall of joy framing an incredibly cute face.

And those beautiful deep-brown eyes.

And the bright pink of her cheeks, the white gleam of her teeth, the way her uniform would ride up over her rump when she performed her cheerleading contortions!

And then, wonder of wonders, all of reality seemed to fade away from Paul Tyler—Meg Penny turned and she
smiled
at him!

Paul turned away, embarrassed that she had caught him staring. He didn’t want her to think that the only thing he did was drool over the way she bounced about in cheerleader’s garb. Of course, he found her physically attractive—incredibly so, in fact—but he also liked a lot of things about Meg, like her spunky personality and her constant, sunny optimism.

His reverie was broken by a nudge from a teammate. “I’m telling you, man, she wants your bodily fluids.”

Scott and his one-track mind, however, just wouldn’t let go. “You gotta ask her out!” he yelled. “Can’t you see that she’s just begging for the kind of satisfaction only a lusty football stud can provide?”

Paul turned and glared at his friend. Scott was shorter than Paul by half a head, and sometimes he seemed
dumber
by ten times that amount. But what Scott Jesky lacked in height or intelligence, he more than made up for in sheer obnoxiousness.

Without the Moon by Cathi Unsworth
An Ocean Apart by Robin Pilcher
Who You Know by Theresa Alan
Heart Surgeon in Portugal by Anna Ramsay
Star Wars - The Last Battle of Colonel Jace Malcom by Alexander Freed
Shuteye for the Timebroker by Paul Di Filippo
A London Season by Anthea Bell
For Sale —American Paradise by Willie Drye
The Book of Revenge by Linda Dunscombe
Jace by T.A. Grey
Our partner