The Blue (The Complete Novel) 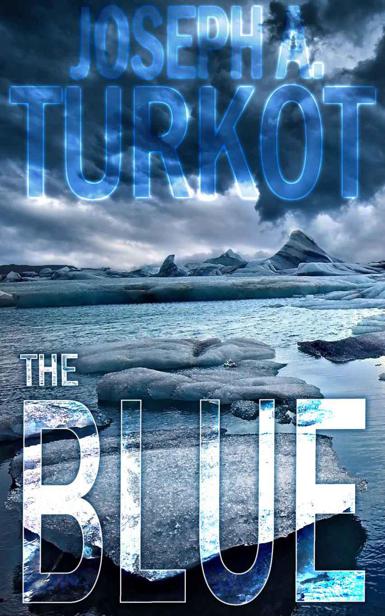 A Post-Apocalyptic Story by Joseph A. Turkot

Check out
ALL MY BOOKS

It’s been three days since we left the boat. And two since I told Russell we’re being hunted.

He still hasn’t seen it with his own eyes. Our hunter. The black shape that skirts the edge of our ice floe—
Resilience
floe, as Russell started calling it. But I’ve seen it two nights in a row now. Moving along the rim of our new home, waiting for its chance to strike while we’re both asleep. By some ironic mercy, my side’s been hurting less and less. And I haven’t fallen asleep on watch once. Russell says he hasn’t either.

When we finally realized it was time to leave the boat, and that the ice that closed in on all her sides wasn’t going to open up again, Russell said it didn’t matter. We were planning to leave her anyway. Make our last trek toward the blue. Because the blue never did leave. It’s real.

Still hangs in the same spot, five days since we first laid eyes on it. A beautiful crack in the gray armor of the sky. And it’s better we’re on the ice, Russell says. The tent is pitched to full height now, and there’s more room to crowd around the stove, to stay warm. He doesn’t mention that we’re almost out of fuel now, and that we’re down to quarter-rations of the dog food. I’ve seen him counting it out inside the tent. I haven’t asked how many days we have left.

Keep it close, Russell tells me, shoving the black pistol into my hand after he’s inspected it for the third time today. It was only this morning that he’d decided we should test the guns out. Fire them right over the long ice plains. The black one hadn’t fired. Took him two hours, but he got it working again.

I know why he really needs to make sure it’s working. Because if our stalker comes back again tonight, we need to make sure there’s as much firepower as possible. When I asked him what it could be, he said he had no idea. Maybe a seal. I told him this thing was much bigger than a seal. He didn’t say anything more after that.

I do my hundredth round of the day, after looking to make sure Russell and Voley don’t need me at the tent. It’s the same beaten path around the rim of our ice floe. I’ve memorized it. Even Voley’s started to come sometimes. Master of the three-legged shuffle. He doesn’t seem to mind it.

Russell sits hunched over the rifle, tinkering with something on it while Voley limps over to the boat where it’s cemented into the ice. Completely sealed into Resilience floe. It amazes me how good he’s getting around again. The pills were saved from the washout, sealed in plastic, and he hasn’t missed a day of antibiotics. Even Russell’s been taking them. Something about the blue—like it’s made him push his old superstitions aside in the face of the truth—that we have a real shot of standing underneath the sun.

None of our conversations have veered around to the fact that the sun won’t feed us. Russell just reminds me that it’ll keep us warm. And even though it’s barely snowing anymore, so soft and light that sometimes I think it’s stopped altogether, he reminds me that the sun means the warm and the dry. And that’s what we’ve always been looking for. That’s our Leadville, right there, he says. And he points to the hanging streak of blue. Miles away and hovering over an endless pack of ice. Just a twenty foot layer of solid ground between our feet and the cold ocean that doesn’t roll or shake anymore. No sign of the sea’s movement under us.

He tells me the blue is getting closer too, even though we haven’t started marching yet. The Resilience is drifting toward it all on its own. But I can’t notice. So he might be making it up, just to keep the spirits high. And part of me wants to tell him it’s time to make our last stand. Start our march across the ice now. I’ve felt the urge to ask come into me for the past two days, but I don’t say anything yet. Maybe because there’s still some food, some fuel, and a warm tent. Moving on puts us back in the unknown, at the mercy of the broken pack. And there’re too many supplies here in the tent and the boat to take with us. We’ll have to leave the boat behind, because it’s a part of the ice now. Glued down. So I don’t suggest anything yet. Just go for my round—the hundredth of the day.

I start toward the edge of our flow. It takes me five minutes to get there. I’m used to staring down into the tiny crack of brown water between our floe and the next one over, the Ice Pancake. The Ice Pancake is many times larger than ours, but it’s much lower. Russell thinks that could be a problem if we have to cross it. And when I lean over the edge, looking at the six foot drop to the blank white of Ice Pancake, and the sliver of brown sea between, I almost expect the edge of the Resilience floe to dip in toward the ocean under my body weight. But it doesn’t. I know by now. It’s like this thing is as sturdy as a Rockies mud bank. All an illusion, I know, but I can’t help it. I do my test: jump up and slam into the ground. It’s a good sign that my side doesn’t punish me for acting dumb. And the floe doesn’t even flinch. It’s got its own business and it doesn’t care about my small weight. I do it one more time and give up, imagining that I might slip off into the ocean crack and Russell won’t notice for ten minutes. And I’ll be gone because he’s so deep into taking care of the guns.

I turn around and watch him. From the edge of the floe he’s tiny. I can barely see his fingers going over the steel rod, holding it up to his face, trying to catch what’s left of the daylight. He’s making use of every last bit. And there’s Voley—done exploring the boat, walking out on his own toward the floe’s edge in the other direction. Limp-walking, something he’s managed to do with speed now that we’ve been camped in one place with nothing to do all day but beat up the same icy trails. So I let Voley do his own round, and I start along the rim so that we’ll meet each other halfway.

At first Russell and I were nervous, like Voley would slip, hurt himself, or fall over. But bad leg and all, he’s better on the ice than we are. And it’s easier walking than in Nuke Town—the snow is only a couple inches thick. In places it even runs into pools that make you feel like you’ll sink through to the ocean, but you stop with a jolt and hit another layer of solid. Firmer all around, even if it is all a bit less sure than the soft powder of the Rockies. But there are the deep pockets. Dark, and I don’t know how far you’d sink if you stepped into one.

My feet press into the few inches of snow, hit the ice, and then rise up. No pulling through the awful suction anymore. Just the easy flat surface again. Voley reaches the edge of the floe on his side and turns toward me, nose down in the snow, head waving side to side in random sniffs, looking for signs of our stalker. I turn around, taking my eyes off of everything else, and walk backwards, staring out above the endless pack at the patch of blue sky. Still blue. But I know it will fade soon with the night. Russell says it means we’re probably moving either east or south. Because we’d see the orange if the sun was setting in that direction. It seems like he’s positive I’m going to see a sunset soon—and he hasn’t missed a single night of explaining the colors to me. Again and again. Like the idea itself is keeping us alive.

The soft press of my feet barely makes a sound as I back trek, trying to figure out if Russell is right—if the blue patch really is bigger than it was before. I analyze the sliver. And I think it might be now. The shape has always been the same as Voley’s ears. At least that’s how I’ve seen it. Cut right out of the gray like the clouds are just cloth. But now, the shape’s changed. It’s not quite the same ear. I think it’s pointing more. An elf ear. So it must be getting bigger. Stretching. Which means Russell is right. The floe is moving across the vast brown sea, pulling us toward the warm and the dry.

Ten minutes of hungry daydreaming pass, and then I hear the soft pounding noise. I whip around, breaking my trance, and see Voley at my feet. He looks up at me and then over to the tent. I half expect to see someone running at Russell, making a mad dash at him—our stalker a human after all, and not a seal—but it’s Russell who’s causing the pounding.

What the hell are you doing? I yell over to him. But it’s clear enough—he’s slamming his legs and feet into the ice, ripping forward, managing a deranged looking run. But then it smooths out, and it’s only half-deranged, like he’s been keeping it a secret over the past few days that his sprain is easing up. And then, it’s like I can’t even notice. He curls along the snow, running in a looping line, and then shifts in my direction. When he reaches the edge where Voley and I are standing, watching him in amazement, he stops, gasping to catch his breath.

It’ll be a while, he manages to squeeze out between huffs of air, Before I get my speed back. I tell him he shouldn’t be running on it, that it’s too soon, and that there are a lot of holes in the ice to fall into. Some of them look like they’ll break through all the way to the ocean. But he just tells me he’s got a safe trail mapped out across the Resilience. I roll my eyes, because I know that’s bullshit. I’ve watched the slushy ice holes appear and then disappear in the same day. Loosen and harden up. But when I look up at him again, he’s got a wide, face-consuming grin. His cheeks are bent up and there’s a spot of light in his eyes, some kind of out-of-place happiness. More like delusion. I think it’s the reflection of the blue sky in there. And I don’t criticize him anymore. Then, he waits, like he expects me to come at him again, work him over and convince him that he shouldn’t be on his leg. When he sees I’ve got nothing, he takes off again, zipping in the other direction. And I can’t help it—it makes me smile too. For the longest time, I’ve worried that his leg would be the thing to kill him. Take him from me. That the old infection would last forever. But I know—just like that—that he wasn’t lying. He really did run all the way into Nuke Town. It really was just a dumb sprain on the old stairs of that skeleton building.