Read The Book of the Unknown: Tales of the Thirty-six Online

The Book of the Unknown: Tales of the Thirty-six 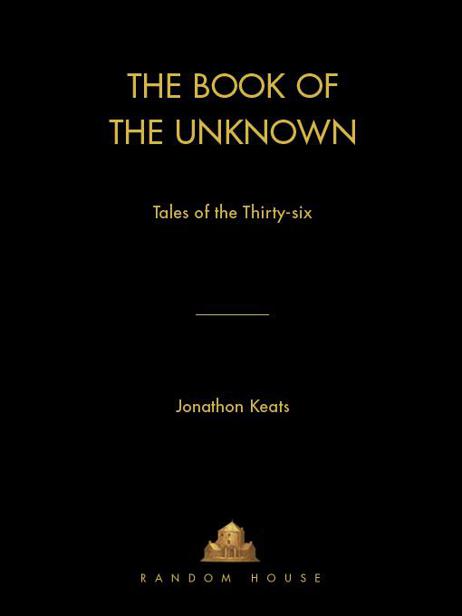 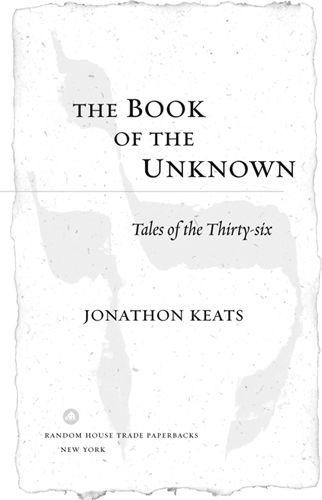 THE BOOK OF THE UNKNOWN

A
LEF THE
I
DIOT

B
EIT THE
L
IAR

T
ET THE
I
DLER

Y
OD THE
I
NHUMAN

Despise no man and deem nothing impossible,
for every man has his hour and every thing its place.

THE BOOK OF THE UNKNOWN

Destiny is an accident.

Twenty-three years ago, while I was in graduate school, the stone remains of a lost synagogue were discovered by construction workers in a small German town. The laborers were digging the foundation for an apartment complex, and the landowner, heavily in debt, permitted building to stop for just one week while every Jewish student in the region was dispatched to save all that could be preserved.

There, beneath a scattering of rocks, I found the documents that would make my career, a crypt of interred contracts and commentaries and correspondence, buried beneath the temple because religious law forbade the destruction of any scrap of paper bearing the name of God. From that textual cemetery, or
genizah,
I resurrected the traditions and rituals of an extinct Jewish village. The dissertation I wrote established my reputation. By my thirtieth birthday, I’d become a leading scholar in my field, lecturing around the world. The only son of immigrants, shtetl peasants who’d escaped the Holocaust, I was living the life that my parents had struggled to bequeath, the embodiment of their dreams.

My mother died in 1998, and my father followed her in 2004. By then my books about lost Jewish communities and their hidden rituals were standard texts. I blush to confess that footnotes from my dissertation had become subdisciplines, complete with postdocs and conference sessions. I cringe to admit that my name was cited in papers concerning archeological offal that would have passed as landfill when I was in school. Even as interest in shtetl life expanded, material dwindled. The field was drifting from the scholarly to the frivolous, and I was, to my chagrin, the honored paterfamilias. As I slouched into middle age, acquiring my father’s paunch, I was settling into academic complacence.

It did not have to be that way. That’s the shame of it. For nearly a quarter century, I’d retained a secret, holding on to a discovery I’d made while excavating that German
genizah,
preserving a fragment that, if my suspicion was right, would eclipse all that I’d yet achieved. Until my father’s death, I’d carefully concealed the fragment, and suppressed the suspicion. I had avoided the whole subject because it was so improbable, completely implausible to anyone who wasn’t superstitious.

And yet, for all my sober professionalism, I’d never quite dismissed it. Superstition had saved my family. My father had been a deeply superstitious man who’d believed that the years of pogroms could be read in the Sabbath flame, an ancient tradition in his native village. The Nazis had invaded in the year he foretold, and the genocide had begun within months of my parents’ arrival on Ellis Island, the town’s only survivors.

My father never forgot. Rather than assimilate, he carried the old country within him. He taught me the ways of dybbuks, and showed me how to make sacred amulets. He told me of powerful seraphim unmentioned in Torah. If I paid close attention, he rewarded me with honey cakes. But if I asked too many questions, inquiring about the anatomy of angels or the motivations of demons, he responded with strange tales about a rogue Kabbalist whose curiosity had once unmoored the world.

The Kabbalist was named Yaakov ben Eleazer, and, as I later learned, his legend had many versions. According to some, he’d been a prodigy, an orphan whose only yeshiva companions were books with which he held deep discussions on subjects that fellow students could not find when they read the same passages. He memorized the Babylonian Talmud, that great compendium of law and lore, before the beard grew on his chin. Forbidden to study Kabbalah because of his age, he conjured his own version, too arcane for even the rabbis to fathom. Or maybe not. Other stories claimed that he stole sacred Kabbalistic texts from the synagogue library, yet misunderstood them so totally that he rendered them incomprehensible to learned men. By this reckoning, he was not a prodigy scholar but a precocious charlatan.

What nobody disputes is that Yaakov could sing. After his voice broke, mothers kept their daughters well covered in synagogue, wrapped up in mantles and shawls, lest his baritone open wombs and his words gestate children. The women’s concerns were unwarranted. Yaakov wasn’t training his voice for matinee seduction. He had studied that God sang the world into existence using the sounds of the Hebrew alphabet, and that those syllables, rightly pronounced, were all-powerful. The orphan, lacking every earthly influence, intended to produce that heavenly music in his gullet.

For a time, he must have kept his ambitions sotto voce, as we hear about him again only as a grown man, assistant to the cantor at the synagogue. He kept a small room in the temple attic. Strange noises emanated from that cell at night. Scholars in the adjacent study house claimed they sounded less like prayer than copulation with demons.

Yaakov responded to their accusations by revealing the system that he’d been developing since summoning Kabbalah as a child. He believed that the true sounds of the Hebrew alphabet were concealed between the consonants, where ordinary people put vowels. Those vowels, never written in ancient days, muffled the music that carried God’s word. He wouldn’t explain how to read the music, but, compelled to prove his system, promised to betray a great secret: With the unearthly power his song gave him, he would discover the thirty-six hallowed names of the Lamedh-Vov.

Or was this all rumor? Had others simply heard unnatural sounds and assumed that the orphan who’d once conjured, or stolen, Kabbalah was pursuing greater dangers? Either way, the secret of the Lamedh-Vov, the notion that it might be revealed, would have terrified as much as it beguiled.

The Hebrew letters Lamedh and Vov together signify the number thirty-six. That many righteous people are needed at any time, Talmud relates, to justify humanity in the mind of God. Without them, the world would be doomed. Yet, unlike the elect of other religions, these living saints—I use the word
saint
because no other term in the English language adequately conveys their spiritually elevated status—are necessarily anonymous. Learn the identity of a Lamedh-Vov, and that person would no longer be among the thirty-six; another righteous man or woman somewhere would be called for to keep the world in balance. Why the secrecy? Why are the elect themselves even forbidden from knowing their virtue? The self-righteous are abundant in any time. The saintly are of another order.

By seeking to learn the thirty-six names, then, Yaakov ben Eleazer was putting the world in jeopardy. The Lamedh-Vov have been described as pillars, replaced one at a time on account of death or other events. But to grasp for the entire roster? Yaakov would fell every pillar at once.

Legend claims that he did it. Late one night, as his song peaked, the world lurched. Every scholar in the study house rushed to his room. His cell could not be breached. Ten men together knocked down the door. Yaakov had fallen dead in front of it, struck by the consequences of his deed. The forbidden knowledge died with him, before the pillars could topple, and the world tumble to oblivion.

The scholars, perhaps complicit for not curtailing his experiments, were quick to dispose of the evidence. Fearful of seeing the dreaded list of thirty-six, they gathered all of his papers and books in darkness. Blindly they carried his written belongings, interring them in the
genizah
beneath the synagogue, under ancient volumes turned to sod.

Rustling in their hands, the sacred list of names, some say, unsang Yaakov’s sins.

This, then, was the folklore, dimly remembered, that came to mind twenty-three years ago as I worked to excavate the old German synagogue, and unearthed, beneath several feet of scriptorial sediment, a pale skin of parchment listing thirty-six people in ancient Hebrew. Already I’d observed the name Yaakov ben Eleazer on several
genizah
documents, though there must have been many Yaakovs born to Eleazers in the day, and I’d merely smiled at the coincidence that he was a scholar of Kabbalah, an amusing anecdote with which to tease my superstitious father. The skin of parchment, however, was less easily laughed away.

The thirty-six names appeared not to have been inked in lampblack, but emblazoned with fire. Moreover the lettering resembled no calligraphy I’d ever seen, let alone other writings I’d found in the Kabbalist’s fervid hand. There weren’t any pen strokes. Every line appeared to have been laid down at once, thirty-six names of men and women, each, in the old fashion, with a town of origin. I was well acquainted with the premodern age through my graduate research. I knew the materials and traditions. I’d seen census ledgers and divorce petitions. A list like this didn’t fit.

Yet what could I say? I’d have been mad to mention Yaakov’s legend to my devoutly secular colleagues, and anyway I didn’t really believe, I thought, in the Lamedh-Vov. Embarrassed by my hesitation over the vellum, I slipped it under my shirt. And mortified by my impulsive theft, I kept it locked in an old suitcase for decades.

I intended to tell my father about it, to show him the list so that he could reassure me that it was not sacred, that the story of Yaakov was myth. But for five years I couldn’t confess to him that I’d stolen it, and for eighteen years I couldn’t admit to myself that I’d been unable to confess. Then he was dead and I was alone.

While my parents passed more than half their lives in America, my mother had insisted on burial in her family plot near Lodz. In death, my father followed her there, and I accompanied the coffin. Pressed between two starched shirts, I brought the list of thirty-six, intending finally to bury it as well. First, however, out of respect for his cherished superstitions, if not acknowledgment of my own latent beliefs, I vowed to visit one town on the list, to see if I could find any trace of saintliness.