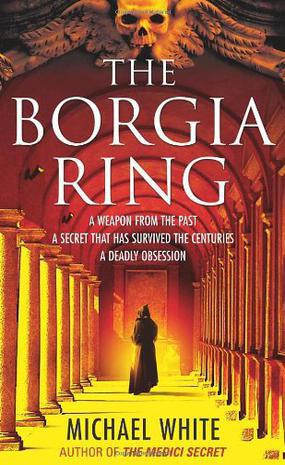 Michael White has been a professional musician, a science lecturer, newspaper columnist, science editor for
GQ
magazine and a series consultant for the Discovery Channel’s
The Science of the Impossible
.

First published in 1991, he is now the author of 30 books, including the bestselling novels
Equinox
and
The Medici Secret
. Under the pen name Sam Fisher he is also the author of
State of Emergency
, the first in a series of action thrillers.

He was awarded the Bookman Prize in the US for best popular science book of 1998 for his biography of Isaac Newton,
The Last Sorcerer
, and is an Honorary Research Fellow at Curtin University and lives in Sydney with his wife and four children.

All rights reserved. No part of this book may be reproduced or transmitted by any person or entity, including internet search engines or retailers, in any form or by any means, electronic or mechanical, including printing, photocopying (except under the statutory exceptions provisions of the Australian
Copyright Act 1968
), recording, scanning or by any information storage and retrieval system without the prior written permission of Random House Australia. Any unauthorised distribution or use of this text may be a direct infringement of the author’s and publisher’s rights and those responsible may be liable in law accordingly.

The Borgia Ring
is a work of fiction. Any resemblance between these fictional characters and actual persons, living or dead, is purely coincidental.

All rights reserved. No part of this book may be reproduced or transmitted by any person or entity, including internet search engines or retailers, in any form or by any means, electronic or mechanical, including photocopying (except under the statutory exceptions provisions of the Australian
Copyright Act 1968
), recording, scanning or by any information storage and retrieval system without the prior written permission of Random House Australia.

Addresses for companies within the Random House Group can be found at
www.randomhouse.com.au/offices

The Facts Behind the Fiction

Next to her father sat her brother, Cesare. Once, after he had kept her awake all night with his insatiable lust, he had boasted about killing dozens of men, and of how one day he would slaughter their father and have his own chance at the papal throne. But now Cesare Borgia was ill. It was the French disease. Everyone knew it. His face was covered with running sores and there was a madness in his eyes worse than anything she had seen in them before.

To Lucrezia’s left sat the boy alchemist, Cornelius Agrippa. A tender sixteen-year-old with dark, piercing eyes, he was both her lover and a fellow traveller on the road to occult knowledge. Agrippa had taught her a great many things: ways to retain her youthful beauty, ways to make
every man adore her. Most importantly, he had taught her new ways to kill. Together they had produced murderous potions that brought death with thrilling speed and left no trace.

The last figure to fall under her gaze was Domenico Gonzaga, youngest son of Francesco II, Marquis of Mantua. Domenico’s handsome face was just beginning to show the signs of too much good living. He and Cesare had, she knew, played together as children, but now the two men despised each other. It was her father, the Pope, who had arranged for the Marquis’s son to visit, the latest in a long line of suitors for Lucrezia’s hand. Of course, Cesare had hated them all.

By the end of the meal Alexander was so drunk he could barely stand, but Lucrezia could tell he still had energy left for his favourite pastime. The way he looked at the two black slaves as they helped him from his chair was unmistakable: a look she had seen many, many times. He had once confided in her that the negro boys he had brought into the Vatican could satisfy him in ways nothing and no one else could. It was strange, she reflected, how the men in her life wanted to share with her their most intimate secrets. She relished the sense of power that gave her.

Soon, she found herself alone with Domenico. They were seated close together on a low couch. He ran a finger along her cheek.

‘I’m really not so bad,’ he slurred, breath rancid, lips and teeth stained red by the wine.

‘Whoever said you were, my lord?’

‘You refused to catch my eye at table.’

‘It would have been unseemly.’

Domenico roared with laughter, but his face fell when he saw that Lucrezia was straight-faced and composed. ‘Forgive me, my lady.’ He coughed and tugged at his jerkin.

‘My father arranged this visit, Domenico, not I,’ she said quietly. ‘Your father is wealthy and mine extremely avaricious.’

‘It is true my father is a very rich man and I am heir to his lands. But I would like to think there is more substance to me than mere money and possessions.’ He moved towards her, breath warm on her neck. He turned her face roughly to his and kissed her hard on the mouth. She could smell the animal taint of his sweat. Before she could stop him, he had his hand up her dress.

Lucrezia made a perfect show of trying to pull away. She was an accomplished actress who knew she could better any player on the Roman stage. She felt a sudden surge of pride. She was in the position of power here, even if this lumbering fool believed he was. She had known her own power since childhood, before the flowering of her sexual maturity. And now, in her twenty-fourth year, she was in full bloom and revelled in the knowledge that she could outperform any cheap whore from the ghetto.

‘My brother will slit your throat and rub his cock with your blood,’ she whispered as Domenico managed to worm his fingers into her undergarments. She felt him freeze for a second.

‘Your father would not allow it,’ he said hesitantly.

‘My father is not the master of Cesare, my lord.’

‘But Cesare is not here.’

Lucrezia felt herself slowly melting like thawing ice as Domenico squeezed himself between her legs. He had freed himself from his hose and she could feel his flesh parting her. She threw back her head and groaned.

‘You believe you dominate me,’ she said thickly, her black eyes holding his.

‘It is no mere belief, Lucrezia, my love,’ Domenico
gasped. The beginnings of a cruel smile flickered across his face.

‘But you are sadly mistaken, my lord. You impale me. But I too can impale you.’

Domenico felt a searing pain in the back of his neck. He looked down. Lucrezia Borgia was climaxing, her eyes huge, her groin thrusting back at him. He screamed and tried to pull away from her but felt sapped of energy; he could not move a muscle. Lucrezia kept grinding herself on to him, her face sharp-contoured in ecstasy, her eyes now clamped tight. Then, with her back arched, she froze, shuddered and opened her eyes: the gaze of a falcon ready for the kill.

She pushed him away and he fell back on to the sofa like a mannequin, his erection waving uselessly. He tried to move, but could not. And the pain … the pain was like nothing he had ever experienced. It spread down his neck to his chest. He could not draw breath. Then he felt the liquid erupt from his mouth, a red plume that engulfed his face, reaching his eyes, blinding him. He tried to lift a hand but not a single finger would move. His stomach heaved again and he spewed more blood along with partially digested chunks of pork, chicken and sweetmeats.

Lucrezia was leaning over him. With a cloth, she wiped the blood and vomit from his face so that he could see her. She was holding up one finger. Upon it he could see a large gold ring set with a round-cut emerald. The stone had been levered up and in the opening beneath he could just make out a tiny metal spike coated in red.

Lucrezia smiled sweetly and turned away as Domenico Gonzaga, youngest son of Francesco II, Marquis of Mantua, shuddered his last, and died.

Elrod McBugle on the Loose by Jeff Strand
Krewe of Hunters The Unholy by Graham, Heather
Witch Twins and the Ghost of Glenn Bly by Adele Griffin
Monsoon Diary by Shoba Narayan
Lady at the O.K. Corral by Ann Kirschner
Unexpected Love (White Oak-Mafia #2) by Liza O'Connor
The Johnson Sisters by Tresser Henderson
At Face Value by Franklin, Emily
Entity Mine by Karin Shah
Harmonia's Kiss by Deborah Cooke
Our partner