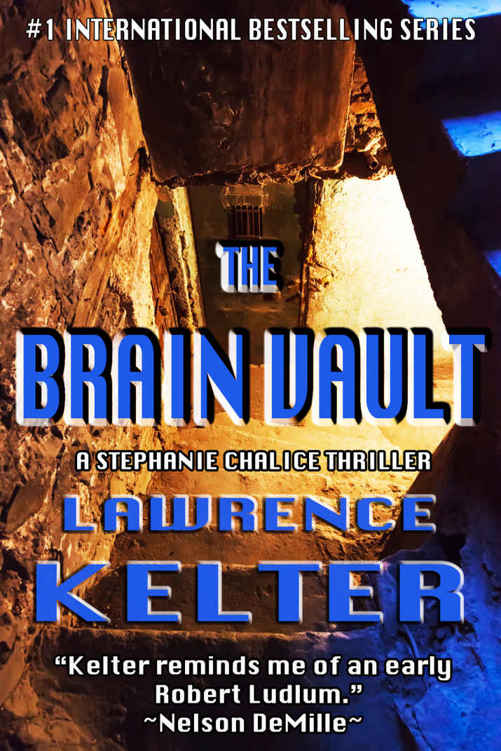 No part of this book may be reproduced or transmitted in any form or by any means, electronic or mechanical, including photocopying, recording, or by information storage and retrieval system, without written permission of the Publisher, except where permitted by law.

This book is a work of fiction. Names, places, characters, and incidents are the product of the author’s imagination or are used fictitiously. Any resemblance to events, locales, or persons living or dead, is coincidental.

N
ewest of all moons, the tail of the waxing crescent was visible as I looked up at the cloud-riddled sky, a dagger’s silver blade against the vast, black heavens.

It was a lovely night for crime.

Now if you knew me, you’d know that a gal like Stephanie Chalice wouldn’t normally be caught dead taking a midnight stroll through Central Park (not without an Uzi under each arm anyway). But I’m not alone; I’m with Gus Lido. Gus and I, we’re both on the job, two of New York’s finest trying to carve a moment’s peace out of a day of sheer chaos. He’s in a tux and I’m in an evening gown—even so, we’re armed and dangerous, trust me.

I was hoping for an altercation free evening, but such seemed destined not to be the case.

“Hey, watch it,” Gus said, grabbing my hand and preventing me from putting my foot down where God and
Jimmy Choo
had not intended for it to go.

Gus shook his head in amazement. “Got to be a Labrador.”

Labrador, how about a Clydesdale?

“The last time I saw a specimen like that was on an episode of Animal Planet—the crew was in the Serengeti, tracking a herd of elephants.”

“Anything else you can tell me from your examination of the specimen? What did the beast have for dinner,
Iams
or
Eukanuba
?”

Hell of a way to start a story, isn’t it?

Yeah, I think so too—In any case, my designer pumps had escaped a fate worse than death.

Well, you may have guessed that Lido and I are a team and then some. We both work homicide out of Midtown North, fighting crime and our sexual urges twenty-four/seven. We seem to be a lot better at solving case crimes than keeping our hormones in check, but we’re discreet—at least I think we are. Gus and I have one of the highest case-closing percentages on the squad—we get the job done and manage to get a little something, something in on the side. Few people know that we’re together, and I intend to keep the list short. I love my job and my partner. Having your cake and eating it too can be a lot of work. No one ever said life was simple.

Gus and I had just broken away from a retirement party at The Boathouse Cafe. Our boss, Chief of Detectives Sonellio had finally put in his papers after thirty-five years on the job. I really and truly love the old guy. He’s been part of my life since way back when. He was my dad’s friend when he was on the job and has been like a Dutch uncle to me ever since my dad’s passing.

I wasn’t sure how well retirement would serve a man like him, a man that had spent the best years of his life putting New York City’s most heinous animals behind bars. I wondered just how much time an ex-cop could spend fly-fishing before he went absolutely bat shit. He was leaving for his lakeside cabin in Maine over the weekend. I guess we’ll just have to see how that goes.

Central Park seemed dreamlike as we strolled along. It looked something like a monotone Van Gogh, with lamplights playing on shadows and tree tips bending to the wind. The stars were large and clear where the clouds gapped. The air was damp enough to enhance the fragrance of the blossoming flowers.

“Hell of a night,” Lido said as we walked along.

Lido turned to me looking distressed. He always had an involuntary reaction to the D word. It was like a scene from a cartoon, and two anvils had just swung down from above him, colliding with either side of his head. Dream, that sinister D word, it was for Lido a metaphoric iceberg, an enigma that he could just see at the tip. The rest, that invisible ninety percent taunted him mercilessly. You see my life has at times been a tad bizarre. There’s just so much going on in my head when I sleep, weird and crazy stuff. My dreams are usually a preamble to adventure, to trouble, and case crime. I think Lido would prefer it if I became an insomniac, but as we all know, that was not about to happen anytime soon.

“So what’d you think about the party?” Lido asked.

“It was fun,” I said, but my eyes said differently, and Gus knew it instantly.

I stopped and watched the hypnotic pattern of the tree tips as they continued to sway back and forth. It took a moment until I confessed. “Change can be very hard to accept.”

“Out of your life.” Lido put his arms around me. “He’s not gone, Stephanie, just retired.”

“He has always been there for Ma and me. I always knew where he was, just a stone’s throw away at the precinct. In a few days he’ll be off fishing for bass of all things. It just seems completely wrong.”

“Maybe you’re wrong. Who knows what we’ll want when we retire.”

Gus was such a fabulous guy; every word out of his mouth resounded with commitment. Our relationship was just coming up on a year, and the marriage word had never reared its ugly head. I suppose that’s what made us work—we both knew we were there for each other. “I don’t know, maybe you’re right.” I shrugged.

“Still.” Lido lifted my chin and looked into my eyes. “There’s more to it than that, isn’t there?”

I shook my head. Lido knew exactly why I was sad. Sonellio’s health had been on a steady decline over the last several months. There was that constant hacking cough that crackled through my brain like gunfire, and the unhealthy pallor of his skin, which had once been rich with the glow of his Sicilian heritage. Was he really going on vacation, or was it just an excuse so that he could slip away quietly to die in peace?

“This is the way he wants it, Stephanie. It would be wrong for you to interfere.” Lido leaned in to kiss me. “I’m still here.”

Our lips had just touched when a frightening, guttural moan filled the air. Adrenaline pumped the melancholy out of my head.

“Christ, what the hell was that?”

We turned and ran in the direction the noise had come from. I heard it again and tried to hone in on the location. Now I’ve got long legs, but I had trouble keeping up with Lido in my gown and pumps. The paths of Central Park were a maze in the darkness. We ran for moments, searching for activity, but the paths broke off in different directions, never taking us where we had hoped they would lead us. I could hear the telltale sound off in the distance. It was the sound of a human being in intense pain.

“Do you know where we are?” Lido asked.

I stopped and looked around, trying to get my bearings, somehow trying to imagine the park in daylight as I was familiar with it. I was hoping to find something familiar about the landscape, something that would ring that proverbial bell. And then, looking up at the sky, it came to me. Off in the distance were the tall tree tips that had drawn my attention as they swayed back and forth with the wind. “Let me take you down.”

“No.” I didn’t take the time to elaborate. I just turned and ran. He knew that I was on to something and followed.

T
he evening sky was bright enough for me to make out the tips of the three bald cypress trees I knew stood at the northern tip of the main lawns that made up the Strawberry Fields Memorial.
I can’t tell you how I knew that we were supposed to be there, but I did. Call it a premonition. “Let me take you down, ‘cause I’m going to Strawberry Fields.” The verse to John Lennon’s song looped through my head as I picked up speed. For a moment, Lido had been left flatfooted, shaking his head in wonder, but he had now caught up and was pacing me, shoulder to shoulder.

“Let me take you down?” Lido asked.

“‘Cause I’m going to Strawberry Fields. Don’t you get it?”

“Stephanie, have you gone entirely insane?”

Gus knew better than to argue. In the time we had worked as a team, he had learned that I had a sixth sense about this sort of thing that was absolutely uncanny.

Okay, there comes a time in every woman’s life when she has to make some really tough choices, and this was one of those times. The exquisite Jimmy Choos I was wearing had gone from being a fashion statement to a high-speed liability. I didn’t want to tumble head over heels like an accelerating albatross, so I kicked them off while in full stride so that I could bravely run barefooted where no evening gown clad detective had ever run before. Damn, I think I just stepped on a slug.

The Big Fat Truth: The Behind-the-scenes Secret to Weight Loss by Roth, J.D.
Hollywood Blackmail by Jackie Ashenden
The Rules of Ever After by Killian B. Brewer
Do Fathers Matter?: What Science Is Telling Us About the Parent We've Overlooked by Paul Raeburn
Gunmetal Magic by Ilona Andrews
Avoidable Contact by Tammy Kaehler
A Summons to New Orleans by Hall, Barbara
A Murder of Taste: A Queen Bees Quilt Mystery by Sally Goldenbaum
Her Mistletoe Wish by Lucy Clark
Whitney by Jade Parker
Our partner