Read The Calm Before (Reign and Ruin novella) Online

The Calm Before (Reign and Ruin novella) 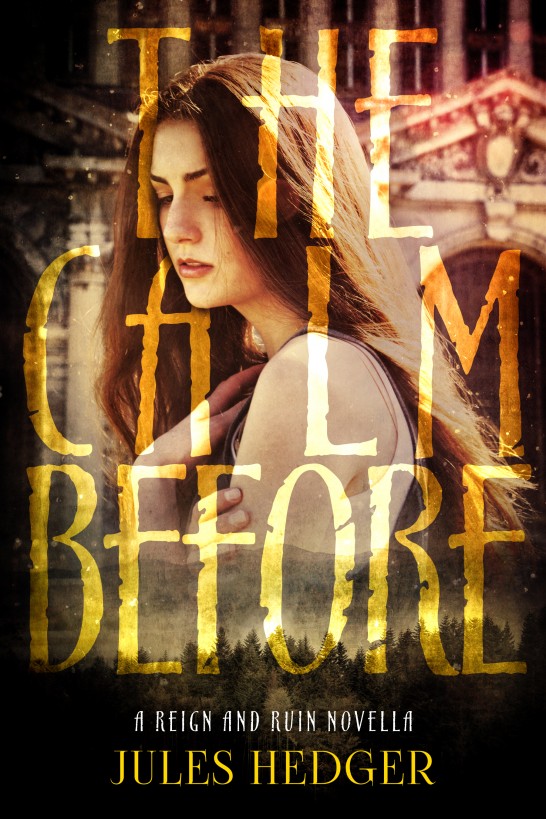 Originally from California, Jules Hedger now lives on a narrow
boat in London with one cat and one husband. The Reign and Ruin
series is her debut.

To
everyone who gave the weird and sometimes off-putting
The
Wilds
a chance. You readers rock my tiny
world.

First published in 2014
by This Thistle Press

The moral right of the
author has been asserted.

All characters and
events in this publication, other than

those clearly in the
public domain, are fictitious

and any resemblance to
real persons,

living or dead, is
purely coincidental.

Thank you for
downloading this ebook. This book remains the copyrighted property
of

the author, and may not
be redistributed to others for commercial or non-commercial

purposes. If you
enjoyed this book, please encourage your friends to download their
own

copy from their
favorite authorized retailer. Thank you for your support. 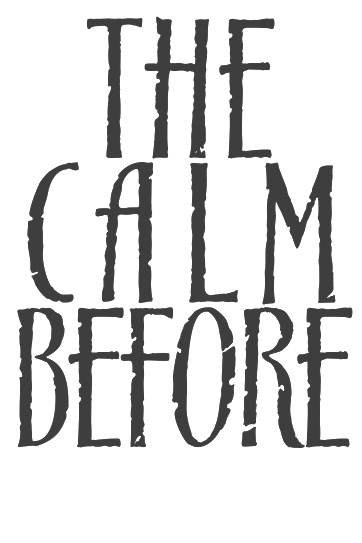 The Worst Comedown
Yet

"If I have to hear one
more preteen degenerate sing in falsetto about his lost baby love
in bad harmony, I will literally jump the fence."

Marty looked
over at his friend Ricky and rolled his eyes. Plastic crackled as
the discarded shopping bags near their feet shifted in the wind.
Ricky stomped one down with his large construction boot to keep it
from flying away.

"No, I am dead
serious, Marty. I'll be one of those people you see on E! or TMZ,
caught trying to jump the barbed wire around Harry Styles' house
with a blunt pair of scissors." He paused to consider. "I would
tell them the aliens told me to do it or that he promised me a
music career. I would need to convince them I was crazy instead of
just plain murderous."

"Ricky, you
are
crazy," Marty said and rummaged in the plastic bags.
Ricky laughed and slapped him soundly on the back.

"Yes siree,
paranoid schizophrenia. Or bi-polar or maybe the flu. But I'm not
right, that's for sure."

Marty and Ricky
sat for a moment on the steps of the drug store. Cars whizzed by on
their way to someplace important: dinner and two-for-one Black
Russians at Stan's or Chloe's or the Plaza Hotel. Or perhaps they
were rushing out of New York to their families in Brooklyn or
Stanton Island or some other such residential and less littered
place Marty had never been to. He sighed and took a swig of his
energy drink, grimacing at the acrid, chemical taste of gasoline
and sugar. Ricky was drinking warm beer in a paper bag.

Marty glanced
at his watch and counted down until, as they did every night like
clockwork, the neon signs of the liquor store across the street
flashed on through the dim, gray dusk light. It was almost time to
see Steve, thank the Painter. Quite literally, in fact. He couldn't
listen to Ricky for much longer.

“Feeling a bit
nervous, Marty? Got the pains yet?”

“Please shut
up, Ricky,” Marty said with a grimace and heard Ricky chortle.

These trips
always became more and more inconvenient. And yet more and more
necessary. Every time he came to visit Steve, almighty Painter of
Palet – and a very interesting guy, in fact – it became more and
more essential for him to play the part. Become the addict. And at
first it was easy.

At first, he
was the Supplier. The Enabler. Simply that. He could give Steve his
drugs without taking any himself, but the more the Painter took the
more necessary it was to stay with him for protection. Hell, it was
his country's livelihood, after all! He wasn't the Caretaker for
nothing. But then they became friends. Then he was being invited
in, invited to partake. And suddenly he was shooting up with his
almighty God and watching alongside him as their dreams morphed
into creatures they could both see stretch across the walls. The
Council would kill him if they knew.

The smooth
swish of an automatic door sounded behind him. Marty shivered as
the cold wind blew strains of a country music song briefly across
his ears. Ricky was still talking about insipid teen pop stars and
Marty knew he had only a few more minutes before his source came by
to drop off his supply. And he really needed it now. His toe was
tapping to the lyrics of a heart-broken Texan because he hadn't had
a hit of heroin for at least a week. The marble had taken the edge
off but still . . .

Well, seven
days in Palet. In this dimension time ran differently and according
to every person on Earth he was regular fixture at the drugstore
stoop. But in reality there could be breaks for up to a month
before traveling back to Earth for a visit. It was a good job Steve
was high all the time. He never commented on the mysterious
accelerated aging.

Maggie, of
course, was another matter. That girl . . . that girl noticed too
much. Marty shook his head to banish the butterflies of her face
and eyes and tits that flashed across his brain. Too young. Too
damaged. He might be the guy sat on a stoop with a lunatic but she
was the one with the mask. But she never talked about it. She only
came over and watched in exasperation as he and her uncle got high
and passed out on the couch. He had woken up more than once with
her wiping his sick off the floor.

And sometimes
she looked at him funny. Like she knew he wasn't normal, knew that
when he left the next day he had to report back to another world
and make sure there was control over the latest dream her uncle had
conjured up. Still trembling and coming down, sweat on his brow and
eyes streaked with red. It was the only explanation why she gave
him any second looks.

Staring at the
neon lights flicker, Marty felt his toes curl up uncomfortably
remembering the chocolate brown eyes and the searching stare they
gave him, as if she was trying to see into his mind. In those
moments Marty forgot his ticks. It was as if a steady hand was
placed gently over his trembling fingers to still their shaking.
Now, as the sun set over New York and the withdrawal began its
terrors, the shakes were inevitable. He scratched his wrist. Where
was he?

The thought had
barely skittered across his mind before he heard a flutter behind
him, like the movement of just starched chinos. Ricky didn't notice
but Marty turned around, spotting the brightly polished shoes on
the step above. They moved off and into the drug store. Marty
waited until he heard the swish of the moving doors and the beep of
the entry alarm before standing up and following the person into
the building.

"Marty, can you
get me another can?" Ricky called after him.

The overheard
fluorescent lights cast everything in a dull, urine-stained shade
of yellow and the country music had switched to something a little
more RnB. Something from ten years ago that Marty had only heard
before from rifling through Steve's sparse music collection. Maggie
nearly yanked it from his hands when she had seen it. He smiled as
he remembered the lecture in music he had received on one of the
rare evenings he hadn't passed out. Cute that she thought he could
be her project, but he was hopeless and she soon learned not to
bother when he refused to spot the difference between The
Decemberists and Black Sabbath.

He walked past
the attendant and followed the click clack of business shoes across
the laminate flooring, down aisle 5 and 6 and through a thick set
of transparent plastic flaps that separated the heated lit interior
of the drug store with the cold, gray air of the back room and
warehouse. Marty looked to his left and saw the tail end of a suit
disappear behind some cardboard boxes and followed swiftly after.
No one seemed to care that a dirty, unshaven man from off the
streets had apparently walked into the employees-only area and
Marty got all the way to the manager’s office without the alarm
being sounded. It was never going to sound, not when the man behind
the glass pane of the office settled down in his seat and waited
for Marty to follow him in. The manager knew Marty like a brother.
He'd sold him enough drugs to hold sway over him like family,
anyway. And he had an amused look in his eyes as Marty entered the
room and sat sheepishly down in the chair in front of the desk.

“I don’t know
where you get the money for this, you know,” he said in a soft
voice. The ticking of the clock behind him was as loud as a
jackhammer to Marty’s ears. The man noticed. “You’re coming down
pretty hard, aren’t you?”

“I’m fine,”
Marty said, ignoring the bead of sweat that inched torturously down
the side of his neck. “I just need to pick up for the others.”

“You’re telling
me you sold your entire stash in less than 24 hours?”

Marty took a
moment. 24 hours. Yes, he was in Palet for around a week. That made
sense. And then he cursed, because he really shouldn’t be showing
up so frequently in this world. But sometimes he forgot the time
difference. It was hard to remember when his foot was tapping so
much . . .

“Yup, well. I
am anticipating a big party tonight so I just want to be prepared.”
The two men stared at each other. Marty tried not to fidget. The
man sighed and opened the top button of his white, button-down
shirt. He leaned over and unlocked a safe hidden surreptitiously
into the wall near his feet, pulling out a bag of white and brown
powder separated into smaller, ounce-sized portions. He pushed it
across the desk and accepted the stiff paper envelope of cash
pushed back over to him.

Marty tucked it
reverently into the large, inside pocket of his jacket and stood up
to leave. The manager of the drugstore lifted his feet onto the
desk and crossed them with two heavy thunks on the wooden top.

“You know,
Marty, you could do so much better for yourself.” The clock ticked
even louder and with the heroin in his pocket all Marty wanted to
do was get out of there. “You sell enough of this stuff to be
making a mint, but you look awful. You should take care of yourself
more. You seemed to have aged nearly a decade since I met you a
year ago.”

Marty forced
his face into a grin and ran a hand nervously over the stiff
stubble on his head.

His breath
quickened as he pressed his back up against the cold white tile and
pulled the bag out of his jacket pocket. Opening one of the ounce
bags carefully, he tipped a small line on the toilet bowl and
snorted it down. He closed his eyes and, fumbling to close the zip
lock, sat down on the floor to wait for the shakes to end.

Ties That Bind by Heather Huffman
All Things Eternal (Book 2) by Alex Villavasso
Death-Watch by John Dickson Carr
Surrogate and Wife by Emily McKay
Surviving Antarctica by Andrea White
The Toxic Children by Tessa Maurer
What Little Remains (The Fallout Trilogy Book 1) by Wise, Gabriella
Mystery of the Hot Air Balloon by Charles Tang
Whill of Agora: Book 02 - A Quest of Kings by Michael Ploof
Jennifer Crusie Bundle by Jennifer Crusie
Our partner