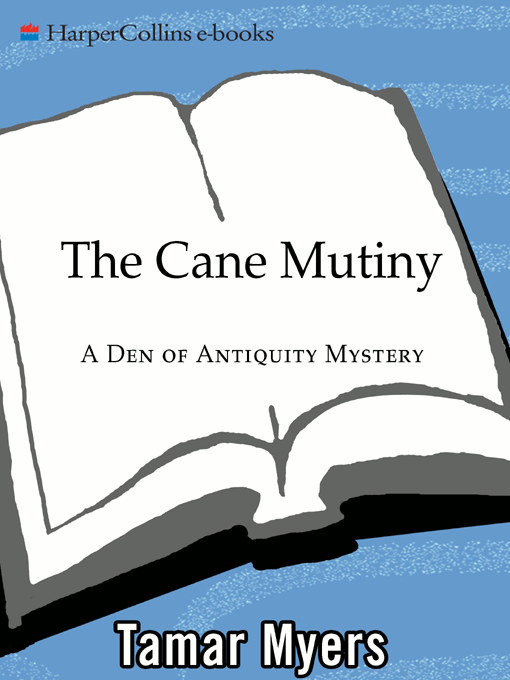 A DEN OF ANTIQUITY MYSTERY

The city of Charleston, South Carolina, has more ghosts thanâ¦

Colonel Beauregard Humphrey is a legend in his own mind,â¦

Wynnell Crawford is my oldest and dearest friend. When Iâ¦

Tweedledee recoiled when she saw me. “It's you,” she said.

There are few things more embarrassing than having one's motherâ¦

I beg your pardon?”

Mr. Murray definitely had our attention. Mama, bless her heart,â¦

Rob's mom. We did tell you she's coming to visit,â¦

On the way back into Charleston, with a game planâ¦

I stared, open-mouthed. If a colony of bees had beenâ¦

You're a woman,” I managed to say, after an embarrassingâ¦

Now make yourself useful,” the Colonel ordered the dead beast,â¦

The “must” word rattled my teeth like a Yankee saber.

On mornings he takes the boat out, Greg gets upâ¦

Wynnell didn't mean to knock me down. She picked meâ¦

Marvin's collection was displayed in what appeared to have beenâ¦

Had I not been warned, I would have thought sheâ¦

If I didn't close my mouth soon the cat wasâ¦

I can't think of a single soul who would callâ¦

The former beauty queen responded by backing up through theâ¦

Hermione Wou-ki sat resplendent on a green and gold sofaâ¦

A second later C.J. entered the room bearing a silverâ¦

The rear rooms of the house exhibited none of theâ¦

I leaned forward on my chair. “Who?”

I shall begin by telling you how I met Robertaâ¦

So Aida Murray was indeed alive and involved in theâ¦

It was obvious that C.J., oblivious to wickedness, didn't seeâ¦

She clicked off the safety. “Shut up. I don't likeâ¦

C.J. has no father, and rather than choose among herâ¦

Other Books by Tamar Myers

T
he city of Charleston, South Carolina, has more ghosts than natives. But it is not quite true, as one rude tourist recently put it, that our ghostsâor, Apparition Americans, as they prefer to be called nowadaysâshow more life than their flesh and blood counterparts. I was not particularly surprised, therefore, to see a pirate hobbling down the alley behind my antiques shop, the Den of Antiquity.

It happened one exceptionally foggy night in early April, when Mama and I were returning home from a musical recital at the College of Charleston. I'd decided to stop by my shop on King Street to retrieve a book on antique canes that I had recently purchased. My plans for the remainder of my evening were to snuggle up in bed next to my handsome husband, Greg, and peruse the book while he watched the end of a basketball game. Mama's plans were to curl up in
front of her own TV and watch reruns of
Leave It to Beaver.

At any rate, upon seeing the Apparition American, I stomped on the brakes, and as soon as we'd jerked to a stop, I flipped on the high beams. Unfortunately the light reflected off the moisture in the air, and in the split second it took to put the low beams back on, the ghost had disappeared.

Mama sighed. “A very handsome pirate. If my arthritis wasn't acting up, I'd jump out and chase after him. Wherever it is he went.”

My heart was still pounding, and my legs too weak to support my full weight, so I remained behind the wheel of my silver Mercedes. I did, however, drive the entire length of the Alley, and finding no one about, either spectral or real, hightailed it back to my house on Squiggle Lane.

When Mama and I burst into the den, where my handsome hubby was already deeply absorbed in the game, we must have brought with us a surge of intense energy.

“So the concert was that good,” Greg said, without shifting his gaze.

“The concert was just okay,” Mama said. “It's the pirate who's put the wind back in my bloomers.”

“You have to admit it, Abby, he was really a hittie.”

“That's what you think. I meant what I said. If he was twenty years younger, I'd hit on him.”

Despite the fact that my mother, who stands all of five feet tall, is trapped in a 1950s time warp along with June Cleaver, she at times displays disconcerting flashes of lust. If it were not for the fact that my minimadre is still a virginâtwo children notwithstandingâand will forever stay that way, I assure you, I would have been really creeped out. As it was, I felt nauseous.

Greg pressed the mute button on his remote and jumped off the sofa. “What's all this about a pirate? Or did you say âparrot'?”

“We saw an Apparition American and he was ugly enough to turn a train down a dirt road.”

Greg smiled. “As ugly as that?”

“Even uglier. I bet that when he was born his mama had to borrow a baby to take to church.”

“He was six feet tall,” Mama said. “Just like Greg. And he had a huge black beard.” She gasped. “I bet it was the ghost of Blackbeard.”

“He was no taller than you, Mama. And he didn't have a beard; only stubble, and a scar that went from his left ear to his nostril. And those beady dark eyesâI'll never forget them. He even had a wooden leg, Greg, just like the stereotype.”

“Yes, he did have a wooden leg.” Mama agreed reluctantly. “But it was cute.”

Greg laughed before kissing me on the mouth and then pecking Mama on the cheek. “Well, at least you two finally agree on something.”

I bristled at what amounted to a dismissal. “I didn't say his leg was cute.”

“But both of yours definitely are.” Greg winked before plopping back on the couch. He works long hours as a shrimper and is no couch potato. I certainly did not begrudge him his method of relaxation.

“What about mine?” Mama demanded.

I pushed her gently from the room. For much of the time since Daddy died nineteen years ago, hit in the head by a seagull with a brain tumor the size of a walnut, Mama has been competing with me for the attention of men. I'm happily married again, and no longer competing, but I'm not sure the message has really gotten through to Mama.

“Abby, are you trying to get rid of your dear old mama?”

“Why I never!” She stamped a petite pump and stalked dramatically to her very comfortably appointed room. One that I pay for, I might add.

Greg waited until we could no longer hear her. “So, Mrs. Ghostbuster, what are your plans for the rest of the evening?”

“Well, I thought we would get ready for bed and then I'd read this book on antique canes while you finished the game, but with all the excitement, I forgot to get the book from my shop.”

“I have a better idea. What if we get ready for bed, and then instead of me watching the game, we come up with creative ways to use the bed that don't involve sleep?”

Both Mama and the pirate were soon forgotten.

There is nothing like a good fruit cup to start the day right. Greg gets up at five on days he takes the boat out, and since Mama invariably sleeps in now that she's retired, I had the kitchen to myself.

Officially I open the Den of Antiquity at ten, but there are always things to be done beforehand, so I'm usually there by eight-thirty. My assistant, C.J., is a brilliant salesperson and an asset to the business, but a liability to my nerves, so she isn't permitted to show up until just before opening time. For the record, she also leaves an hour after I do.

I'm usually a cheerful person, but today I arrived at work in particularly fine fettle, eager to carpe diem. But both my fettle and diem were ruined the second I stepped into my showroom. C.J., bless her oversized heart, had strewn walking sticks in the clear space in front of the register. Apparently she'd been showing the canes to a customer at closing time, but still, that was no excuse to just let them lay there. If I hadn't flipped the lights on first I might well have broken my neck.

Of course I picked the sticks up, and by the time C.J. showed up, I was ebullient as always, the matter almost forgotten. In fact, it was such a busy day that the matter was forgotten, until the next
morning. This time the canes were in a pile, and the faux elephant foot that held them had been upended.

I left the evidence where I'd found it and was busy cross-checking an invoice when C.J. arrived. I didn't know she was there until she tapped me on the shoulder. I don't mind sharing that I jumped a foot off my chair and used a few words unbefitting a lady.

“Sorry, Abby. You drink too much coffee, you know that?”

“I drink just the right amount.”

She tossed her dark blond mane in disagreement. “My Granny Ledbetter up in Shelby was jumpy just like you, and then she switched to powdered caribou. It made all the difference in the world. The only problem, it's really hard to find.”

“That's carob, I believe. It's a seedpod that tastes more like chocolate than coffee. And you can find it in just about any health food store.”

The mane got a good workout. “I know what carob is, Abby. What Granny drinks is powdered caribou antlers. Ones that fell off naturally, of course. She said that not only did the switch calm her down, but it ratcheted up her sex life something awful.”

“What's that, Abby? Another kind of health food drink? Because Granny doesn't needâ”

“The letters stand for too much information. I'd really rather not hear about your grandmother's sex life.”

She nodded and then her eye caught the pile of dumped canes. “Abby, someone could stumble over that and get hurt.”

“I was about to say the same thing.”

“As well you should. It is your mess, after all.”

“It is?” She was staring at me without guile.

“I thought you made it. Face it, Abby, you're not the neatest pin in the sewing box.”

“Maybe a customer did it just before I locked up yesterday. Sometimes after locking the front door, I head straight for the bathroom, and then go out the back. Especially if I already have my purse with me.”

“Yes, but I found the same thing yesterday morning.”

“Abby, it's possible you have a mutiny on your hands.”

“You know, like on a ship. But instead of the
Caine Mutiny,
with an
i
like in the movie, it's the cane mutiny. Get it?” She chortled. “Of course it was a book first.”

I sighed several times as I picked up the wayward walking sticks. It should have been C.J. doing it, but she was too busy impressing me with her vast store of knowledge. Meanwhile customers were gathering outside the locked doors. Finally, I'd had enough.

“Yes, you are.” She sauntered over to the doors and unlocked them.

But whatever differences C.J. and I were having at the moment took a back seat when we saw the gentleman who was the first to come through the door.