Read The Carnival at Bray Online

The Carnival at Bray 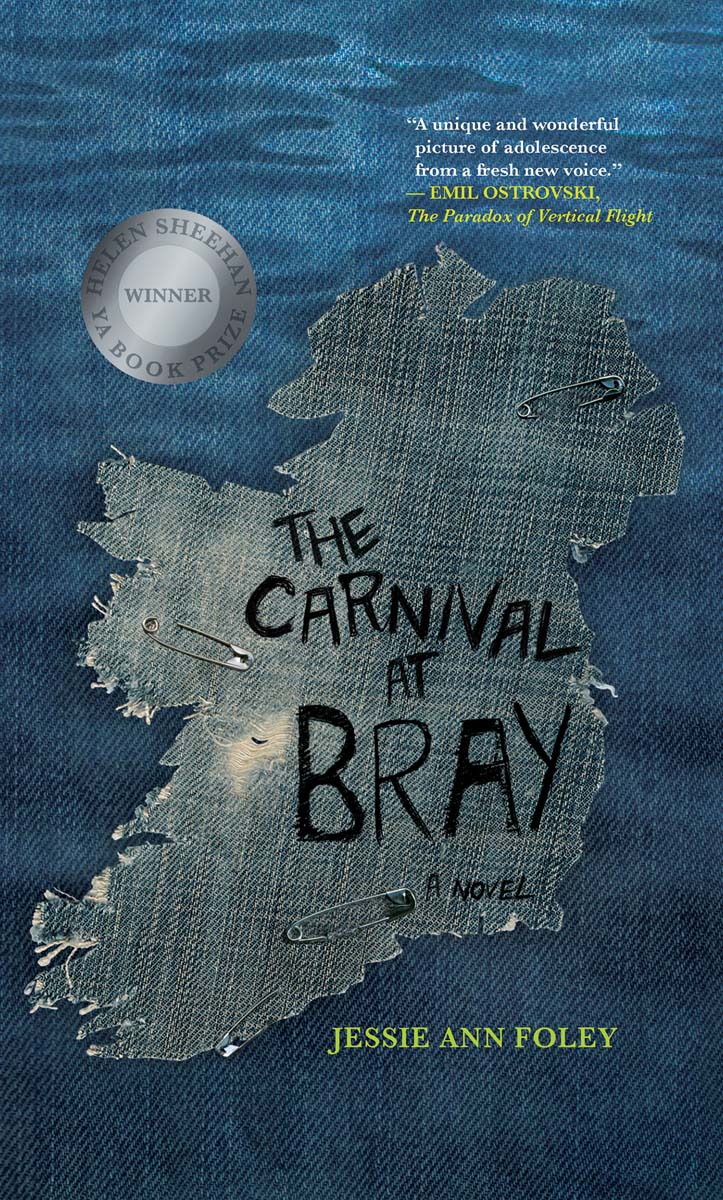 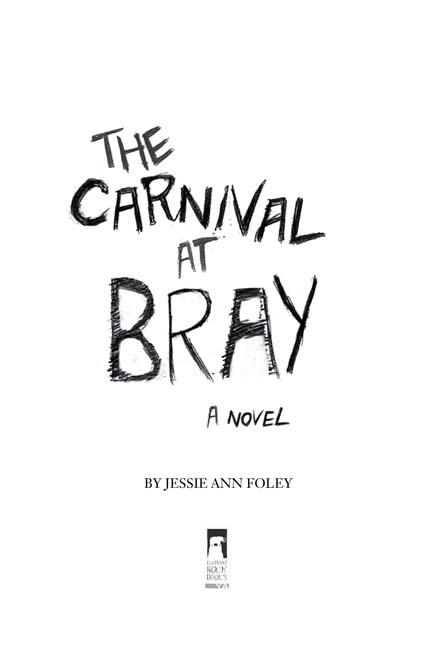 Winner of the 2014 Helen Sheehan YA Book Prize

This is a work of fiction. Names, characters, places, and incidents are either a product of the author's imagination or are used fictitiously, and any resemblance to actual persons, living or dead, events, or locales is entirely coincidental.

For information about permission to reproduce sections from this book, contact Permissions at
[email protected]
. Elephant Rock Books are distributed by Small Press United, a division of Independent Publishers Group.

For Denis, the measure of my dreams

If you're lucky, at the right time you come across music that is not only “great,” or interesting, or “incredible,” or fun, but actually sustaining. Your emotions shoot out to crazy extremes; you feel both ennobled and unworthy, saved and damned. You hear that this is what life is all about, that this is what it is for.

The carnival at Bray stood braced against the rain on the rocky coastline of the Irish Sea, the pink and green lights of the old-fashioned Ferris wheel winking and dissolving in the reflection of the waves. Maggie had already ridden the Takeoff, which made her feel like a pebble being skipped across a lake; the Crazy Frog, which whiplashed her back and forth so hard that she dinged her head off the safety bar and emerged with a painful purple egg already rising from her temple; and finally, Space Odyssey, which spun around so fast that gravity suctioned her and Ronnie to the cushioned wall like splattered bugs. Halfway through the ride, a girl who was pinioned across from them barfed, but the suction was so strong that the puke no sooner arced from her mouth than it was sucked back with a wet
splat
all over her own face. The ride ended abruptly, sending everyone thudding to the ground, and the sisters fled the sour smell of peanuty vomit on wobbly legs.

“Where to next?” Ronnie was counting the remaining tokens in her palm. “I still have enough for three more rides.”

“Aren't you getting
cold?”
Maggie looked at her little sister, whose pale, wet hair was plastered to her head and whose hand-me-down windbreaker hung to her knees as warm and waterproof as a plastic grocery bag.

“Yeah, but Mom said she wasn't going to pick us up until
the carnival closes.” Ronnie squinted across the dark road at the row of pubs and moss-streaked hotels where their mother had fled with Colm. “Do you think they'll get back sooner?”

“What does that even
mean?”

“But that's what you said about âdouche,' and âcondom,' and the first line of that Liz Phair song,” Ronnie complained.

“Well,” Maggie said, putting an arm around her sister's thin shoulders and drawing her under the leaky umbrella, “honeymoon time is kind of like all three of those combined. When
you're
sixteen and I'm twenty-one, we'll talk
all
about it. Nowâwhere should we cash in the rest of those tokens?”

“Bumper cars!” Ronnie shrieked, breaking free from the protection of the umbrella and racing ahead to the arena, where empty cars pointed every which way like in one of those apocalyptic movies where a whole city evacuates to escape an infectious disease.

“Don't you want to go on the Ferris wheel?” Maggie called after her. She reached up and touched the lump at her temple. It was hot and throbbing, and dotted in the center with a small smear of blood.

“Fine,”
Maggie sighed, holding out her hand to the rain to clean the blood from her fingers.

Ronnie flashed a winning smile, infectious and gap toothed, and they lined up behind the small herd of other little kids who stood waiting to turn in their tokens. Maggie was taller than all of them by at least a head. Earlier, they'd passed a group of Irish teenagers, kids of about Maggie's ageâmaybe even her future classmates at Saint Brigid's. The boys were dressed in tracksuits
and gym shoe brands she'd never heard of, and the girls wore tights under their skirts and heavy gold necklaces. Not one of them had even glanced in her direction. Maggie was quickly learning that being Irish-American, as she was, was quite different than actually being Irish. Now, she stood behind Ronnie and watched the group as they walked toward the road. Their clothes, their slang, the way they wore their hair: all of it was foreign and unfamiliar; all of it was new, intimidating, and strange.
I'm never going to fit in here,
she thought.

The announcement that, after four months of dating, their mother was marrying a man five years her junior and they were all moving to his hometown in Ireland so he could help run his brother's construction business wasn't really all that surprising. Since the day ten years earlier when Maggie's father had walked out on them for a woman known in their home only as Bitch, her mom had developed a tendency to fall madly in love with whatever loser she was currently dating. It had always been easy for Laura Lynch to meet menâshe was still young, had high, round breasts and green eyes fringed in long, mascara-tarred lashes, and she spoke in a gentle, low voice that men leaned in to hear. Each of her romances was a whirlwind, and each ended in total disaster. In the aftermath, Laura would lubricate her despair with great quantities of red wine and the occasional sleeping pill. Over the years, whenever this happened, Maggie had learned to quietly pack a bag for herself and Ronnie, drag it up the stairs, and knock on the door to their grandma's apartment on the second floor of the two-flat.

“Mom's having one of her moments,” she'd explain.

“How bad this time?” Nanny Ei, dressed in pleated jeans and a seasonal turtleneck, would step out in the hallway and the three of them would listen to the noises drifting up the stairs from the first floor. Sometimes there was sobbing. Other times there was drunken snoring. For the really bad times, there was Bob Dylan's
The Freewheelin'
blasting from the tape player, and for the really
really
bad times, there was Joni Mitchell's
Blue
album, with Laura howling along in an off-key soprano.

When she met Colm in April, Laura was coming off a
Blue-
level breakup with Ned, the gambling addict who had spent most of his days walking around the apartment shouting bets into the cordless phone and crop-dusting the air with silent, sulfurous farts. Colm possessed all of the qualities that Nedâand, for that matter, all of Laura's previous boyfriendsâlacked. He had a job, for one thing, and teeth that appeared to be brushed regularly, for another. Not only that, he seemed to be as crazy about Laura as she was about him. In August, they were married at the Cook County Courthouse. In September, they moved to Colm's clean little house in Bray, a damp, briny town a half hour outside Dublin.

Ronnie chose a shiny yellow bumper car, while Maggie picked pale blue. The ride operator turned a switch, and the electric current beneath Maggie's car hummed to life. She lurched forward just as a jug-eared boy who could barely see above his dashboard stomped on the gas and reversed into her at full speed. His laughter trilled into the night while Maggie's head whipped back. White, drifting stars filled her vision. She managed to steer over to the rubber edge of the ring and park while Ronnie and the other kids flew past, yelling, laughing, crashing.

By the time the ride operator switched off the power and Maggie wobbled across the track to find her sister, Ronnie had befriended all the other kids from the bumper cars, even the jug-eared boy with the demolition streak. One little girl was unfurling sheets of pink cotton candy and handing them out to the others. She gave Ronnie a long piece, and Ronnie took it and folded it up
into squares, like origami, then shoved the entire parcel into her mouth. The other kids laughed, and some of them began folding up their pieces, too. When Ronnie saw Maggie, she waved.

“Hey!” She called, her mouth full, “we're going to go back to Space Odyssey! Come on!”

But what was the point? Maggie thought. What if the teenagers, the girls in the dark lipstick and jean skirts, saw her walk by with this group of ten-year-olds?

She waved her sister away. “Nah,” she lied, “I'm just gonna go meet some people at the Ferris wheel. I'll see you when Mom gets here.” Ronnie looked at her across the wet pavement and the ringing lights of the boothsâDart-a-Card, Smash-a-Can, Roll-a-Coinâas if she was trying to figure something out. Finally she shrugged, and ran to catch up with the other kids.

The drizzle had quickened into a heavy rain, and the clouds over the sea rolled by, their dark shapes blackening the whole sky. Maggie stood alone beneath the Ferris wheel, its great twinkling arms reaching up in spindly supplication to the low sky. Fat raindrops poked holes into the choppy gray surface of the sea. When they'd first arrived in Bray, Colm told them that it was just like Chicago: if you want to know what direction you're going, just remember that the water is always to the east. But on the Northwest Side of Chicago, you had to ride the eastbound bus for over fifty blocks before you began to smell the water; here, the sea was pervasive. On sunny days it glinted from the crests of hills or between the walls of buildings, and at night, while Maggie lay in bed, its restless sighing shaped a feeling in her chest that she couldn't quite name. Even her clothes and hair began to take on its fishy, expansive smell, but eventually, and sooner than she expected, she stopped noticing, the way a woman stops noticing the scent of her own perfume.