Read The Case of the Fire Alarm Online

The Case of the Fire Alarm 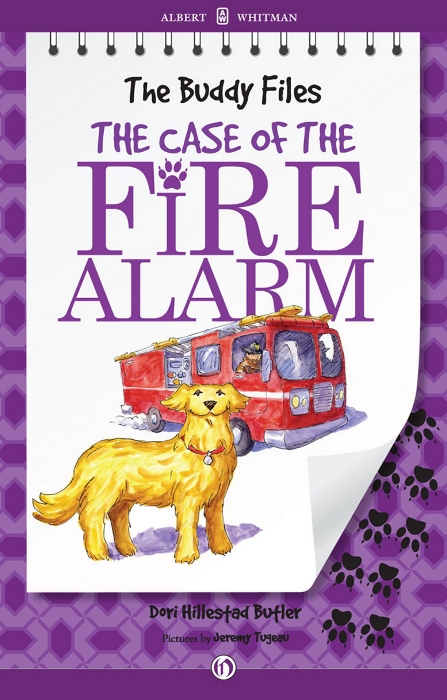 The Buddy Files, #4
The Case of the Fire Alarm 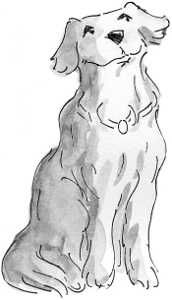 For the Nano Rebels,

the best friends a writer or dog could ever have!

7. It’s Hard to Talk to Humans

9. What Happened to Zack?

10. Who Pulled the Fire Alarm?

My name is Buddy.

I used to be a detective. I used to solve mysteries with my old human, Kayla. But Kayla moved to Springtown, and now I have new humans. Their names are Connor and Mom.

I’m giving up the detective business because I have a new job to think about. 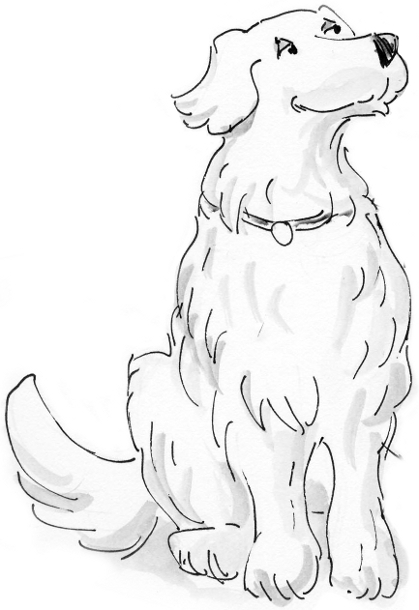 I’m going to be a THERAPY DOG! That means I’m going to sit, lie down, stay, and come when I’m called. I’ll walk nicely next to Mom, and I won’t pick up treats on the floor unless someone says I can. I won’t even speak to other dogs. And I’ll make friends with lots and lots and lots of humans.

I also get to ride IN THE CAR every time I go to my job. In fact, I am IN THE CAR right now. I LOVE the car. It’s my favorite thing!

And I’m sitting next to Connor. I LOVE Connor. He’s my favorite boy!

Connor, Mom, and I are all on our way to SCHOOL. I LOVE school. It’s my favorite place! It’s where Connor and Mom go every day. And now
I
get to go there every day, too, because that’s where my new job is.

I stick my head out the window. “Mouse!” I call. “Hey, Mouse! Are you coming to school with us?”

Mouse is my friend. He’s a dog, not a mouse. In fact, he’s the biggest, loudest dog on our street. Hey, maybe he’s going to be a therapy dog, too!

Mouse pokes his head out of his doghouse. “NO, I’M NOT GOING TO SCHOOL,” he says. It sounds like he’s yelling, but he’s not. He talks this loud all the time. “THERE’S A NEW BOY AT MY HOUSE. HE’S THE ONE WHO’S GOING TO SCHOOL. NOT ME.”

Mouse’s humans bring home new boys and girls a lot. I don’t know where they get them all. Most of the kids are nice, but the last one they had threw rocks at Mouse.

“Is this a nice boy?” I ask nervously.

I think Mouse forgot about the kid who threw rocks.

I see Mouse’s new boy, but I can’t smell him yet. He’s walking toward our car with Jack. Jack is the alpha human at Mouse’s house. He smells like cars and gasoline.

The boy is about Connor’s size, and he has long, shaggy hair. There’s something shiny in his right earlobe.

Mom rolls down her window when he and Jack get close.

“Nice to meet you, Michael,” Mom says. She tilts her head toward the backseat. “This is my son, Connor. I think you two are in the same grade.”

Jack opens the back door, and Michael climbs in next to me.

I sniff Michael all over. He smells like peanut butter toast and dirt and ... I’m not sure what else. I hope he’s not another rock thrower.

Mom waves goodbye to Jack and backs out of their driveway.

“So,” Connor says to Michael, “where are you from?”

“I’m from Los Angeles,” Connor says. “I just moved here, too. My mom and dad got divorced, and my dad is still in California.”

Michael doesn’t say anything to that, so Connor asks another question. “What do you like to do?”

Michael shrugs again. I don’t think he’s much of a talker.

Connor keeps trying. “What about music? Do you play an instrument? Do you like to read? Do art? Play computer games?”

“I like ghost stories,” Michael says finally. “Books ... movies ... anything with ghosts in it.”

“Yeah?” Connor says. “Then you’ll like our school. We’ve got a ghost!”

“What?” he says. “It’s true. There was a fire at our school a long time ago, and part of the school burned down. This girl—her name was Agatha Curry—she got burned up in the fire, and now her ghost haunts the old part of the school.”

“Mr. Poe likes to tell stories,” Mom says. “And he likes to get kids all riled up. There’s no such thing as a ghost, Connor. You know that.”

I didn’t
think
there was any such thing as a ghost. But I’m glad to hear Mom say it.

We pull into the school parking lot, and Mom parks the car. I see kids playing on the swings ... kids playing chase—I LOVE chase. It’s my favorite game! Oh, and over there I see kids hitting a ball around a pole. That looks even better than chase!

Mom opens the door, and Connor hands her my leash.

“Is that our new therapy dog?” a girl about Connor’s age calls out. She and a bunch of other kids run toward us.

I am trying to sniff and lick all these kids, but there are too many of them. And they are all petting me! I LOVE getting petted!

“I need to take Buddy inside now,” Mom says as she tries to lead me away.

“Bye, Buddy,” Connor says. He and Michael race toward that pole with the ball. 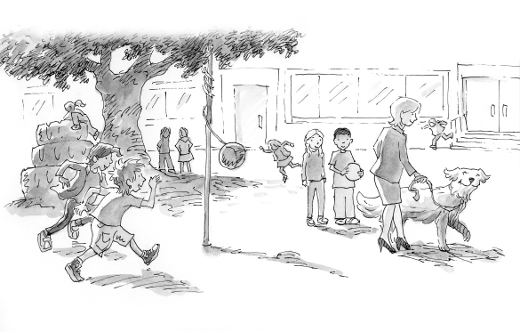 “Where are you taking him? Where is he going to be?” a boy with a missing tooth asks.

“He’ll be in my office most of the time,” Mom says. “But once he settles in, Mrs. Warner will have him in the library sometimes, too. You’ll be able to sign up for reading sessions with him.”

Mom opens the door to the school. “This way, Buddy,” she says, guiding me down the hall. My toes make a funny clicking sound as we walk. Just like at the vet’s office.

There are so many interesting smells in this place. Pancakes ... sausage ... I LOVE pancakes and sausage. They’re my favorite foods!

I also smell shoes. Lots of shoes. And dirt. And perfume. And coffee. I think we are moving closer to the coffee. And farther away from the pancakes and sausage. Too bad!

Mom leads me into a room with a desk and table, plants, and lots of windows. There are two ladies in here. One of them is sitting at the desk. She’s an older lady with curly hair, and she smells very nice. Like liver treats. I LOVE liver treats. They’re my favorite food!

I rest my chin on Ellie’s desk. She reaches into her pocket and pulls out a LIVER TREAT! She hands the treat to me, and I gobble it up. Mmm. I think Ellie and I are going to be good friends.

I’m not so sure about the other lady. She smells like hot pepper and pineapple, and she’s looking at me like
I’m
the one who smells bad.

“I can’t believe the school board approved this,” the hot-pepper-and-pineapple lady tells Mom. “Dogs don’t belong in schools.”

“Buddy is well trained, Mrs. Argus,” Mom says, scratching my ears. “And I think there’s a lot of good that can come from having a dog at school. Studies have shown that simply petting a dog lowers heart rate and blood pressure—”

“Yes, I read the information you passed around,” Mrs. Argus says. “But that doesn’t mean I agree with it. I’ll be watching this dog.” She points a finger at me. “One wrong move, and he’s out of here!”

One wrong move?
What does
that
mean?

“Don’t worry, Sarah,” Ellie tells Mom after Mrs. Argus leaves. “Mona is slow to warm up to new ideas. But she’ll come around. In time.”

“I hope so,” Mom says. She brings me into a smaller room across from Ellie’s desk, then takes off my leash. There’s a desk and chair in the middle of the room, two chairs on the other side of the desk, a big fluffy pillow under the window, and a water bowl next to the pillow.

Everything in here smells like Mom. This must be where she works. And when Mom points to the pillow, I know this is where I’ll be working, too.

I turn two circles on the pillow, then plop down and wait for Mom to tell me what to do next. Does she want me to sit? Will she throw a piece of hot dog on the floor and tell me to leave it? What does she want me to do?

I watch as Mom sits down at her desk, turns on the computer, and starts writing on some papers.

I let out a small woof, in case she’s forgotten I’m here.

“No,” I tell Mom with my eyes. I just want to know what I’m supposed to do.
I don’t want to make a wrong move.

“You were just outside before we got here,” Mom says. “You shouldn’t need to go outside already.”

I already said I don’t need to go outside.

“You just lie there and be a good dog,” Mom says.

I rest my head on my paws and let my eyes close. I think about how much I like my new job already. I’m not going to get into any trouble while I’m here. I’m going to make new friends. Maybe I’ll even make friends with Mrs. Argus. That would be nice ...

Gone Too Far by Natalie D. Richards
Nantucket Grand by Steven Axelrod
The Paper Dragon by Evan Hunter
A Matter of Trust: Follow Your Heart by Dickson, Marcia
Across the Long Sea by Sarah Remy
Arrow Pointing Nowhere by Elizabeth Daly
Birthday by Allison Heather
The Natural Superiority of Women by Ashley Montagu
After Hours: Black Lace Classics by Valentino, Crystalle
Forgotten Forbidden America: Rise of Tyranny by Thomas A Watson
Our partner