Read The Celestial Steam Locomotive (The Song of Earth) Online

The Celestial Steam Locomotive (The Song of Earth) 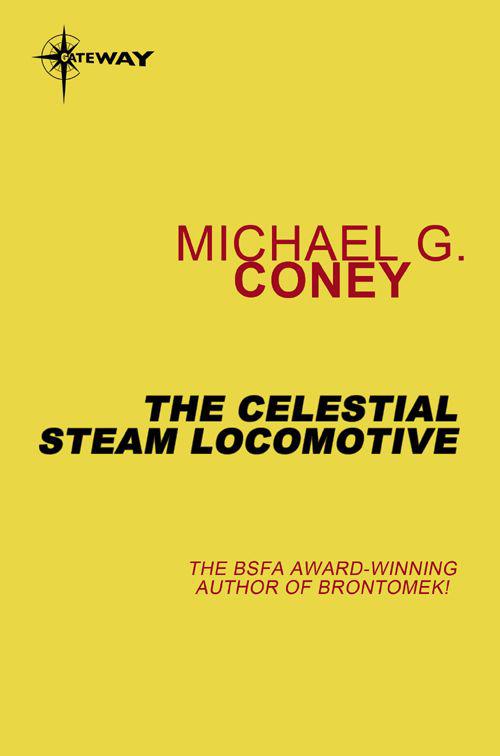 The Coming of the Mole

The Girl Who was Herself

The Oracle in the Fountain

When Eulalie Came Down

When the Dream Girl Bigwished

The Martyrdom of Raccoona Three

Legend of the Axolotl

By the Axolotl Pool

The First Quest of the Triad

Eloise and the Mole

The Captain was a Specialist

Dreams Alone Are not Enough

The Return of Manuel

Re-education of the Mole

The Death of Eloise

They ride the sky-train SHENSHI from Azul to Santa Beth. The driver’s name is Silver and the fireman’s name is Death.

—The Song of Earth

That is what they call me when they gather to hear my stories, when the Dedos (Daughters of Starquin), the Dream-Essences and the ex-Keepers come together in form or in spirit on the barren hillside that I inhabit. Sometimes manlike creatures come, too, and sit beside the stream that skirts the hill, clasping their arms about their knees and gazing up toward me. I don’t know what they think of while they listen. They sit and they watch, sometimes as many as fifty of them, chunky and hairy, while the aesthetic forms of the higher beings flit among them or hover over them, or just are.

I tell them tales of Old Earth.

Time has lost its meaning now. Nothing much has happened on Earth since the Departure, and many of the higher beings have forgotten what happened before that. Me? I can’t forget. I remember everything except how I came into being and how I came to live on this hillside among the rocks and loose screen. Everything else I remember, and many things that happened before I existed—these memories I have gleaned from legends and stories and books and computers of man. I am memory.

Memory is unnecessary on Earth. Out
there
, in the Greataway and on the other worlds, things are happening all the time. So memory is important, out there. Occasionally They come too, and ask me things.

It is difficult to distinguish fact from legend, and after much consideration I have decided it doesn’t matter. I have spoken with men, with Dream People and Dedos, with Specialists and Cuidadors and psycaptains, and I have found no consensus on what is
fact;
it depends on the viewpoint. Interestingly enough,
legend
—which is by definition distorted—gives a far more acceptable view of events. Everyone agrees on legend, but nobody agrees on fact. So I simply repeat what I hear, with no embellishments, but with due warnings.

The story I am about to tell is substantially true.

It concerns three people of differing backgrounds who came together and tried hard to accomplish something that was important to them—and although they didn’t know it at the time, it was important to a Supreme Being too. They succeeded in what they attempted, which gives the story a ring of triumph and glory. The three people became, in fact, legendary figures...

My story takes place during the year 143,624 Cyclic, and it is about three humans of varying species who became known as the Triad. There are other stories, too. These stories relate to events that took place at different times during Earth’s history, but they are all essential to the central theme of the Triad, and of Humanity.

Humanity... I see thirty-two humans listening to me now, and it is satisfying to see children among them. Other living things are in the valley, sensed in the infrared or in a nearby happentrack or visible as light sources or as dancing souls. An Almighty Being is also with us this evening, passing through our speck in the Greataway, pausing, maybe out of gratitude for a favor of long ago. He listens.

You are listening, too.

of The Song of Earth

Known to Men as

The Creation of the Triad

where three humans come together

after their several adventures,

having been chosen by Starquin the Five-in-One

of fulfilling his mighty Intent

The eastern sky was dark, blending with the grayness of the sea. Manuel—a Wild Human who was superstitious, like all of his kind—wondered if God had thrown up a veil there, to hide some terrible mischief he was perpetrating out in the South Atlantic. Maybe he would ask God about that, later. The strengthening wind brought the tang of ozone. Manuel sniffed again and felt momentarily light-headed. There was a storm coming and tomorrow there would be driftwood on the beach, and perhaps pieces of fascinating wreckage. The oxygen-rich air lifted the boy’s spirits. He gave a shout of joy and ran across the sand, paralleling the waves, kicking them as they swirled around his ankles and were spent and easily defeated.

Giving the ocean one last kick, laughing, he turned and ran toward the shack that sat huddled under the low cliff. He opened the door and entered—and stopped dead.

Somebody was there. He smelled a presence, and as his eyes became accustomed to the gloom, he could see a figure sitting in his only chair. He froze, fearing that it was the strange old woman who had been seen around these parts lately.

But the voice was low and soft, with a Pu’este intonation.

He exhaled, his gaze straying to the place where his Simulator was hidden, but the carefully placed heap of brush was undisturbed.

Ellie was safe as a tame guanaco. She was the niece of old Jinny in the village of Pu’este—and, some said, a daughter of one of old chief Chine’s more human moments. The chair in which she sat had been fashioned by Manuel from a driftwood tree stump, and her form was soft and sweet against the wizened timber. So far as Manuel could tell in the half-light, she wore very little.

She hesitated. Manuel was strange, that much was acknowledged in the village. But for two weeks, now, his body had tormented her with unconscious challenges and she’d felt herself wriggling, her breath coming faster when he was near. That morning he’d passed her on the road, and she thought she’d seen something in his eyes when his gaze met hers for an instant. So here she was. But he was known to be strange.

“I was waiting for you,” she said.

Manuel likewise was on his guard. He had his desires too, and a while ago they’d centered on another village girl, a darkly pretty thing called Rhea, after a ridiculous local bird. Recently Rhea had asked, “Why do you keep looking at me like that, Manuel? You want sex—Right, let’s get going. I don’t have all day.” And afterward, when he’d clung to her in affection and gratitude, she’d said, “Get away. You’re making me sweaty. Don’t you have anything to do... ?”

Innocently, Manuel said to Ellie, “What were you waiting for?”

She didn’t answer. Instead she asked, “Why do you live here all alone?”

“It’s peaceful. I like the sound of the sea.”

“You like the sound of the sea.” She repeated it carefully, as though it were a foreign language.

“You haven’t told me why you’re here, Ellie.”

“I was curious. You’re a strange one, Manuel, you know that? What do you do in church? I saw you coming back. You spoke to Dad Ose up there, but you did something else. You went inside by yourself. You’ve got a girl in there?”

“I spoke to God. Why did you come here?”

“I wanted sex,” she muttered. She’d never been ashamed of it before, but now, with this odd youth standing above her, it seemed an inadequate reason for having come. Her body began to cool down. Fleetingly she wished she were back in the village helping fat Chine fight off the encroaching guanacos.