The Channel Islands At War 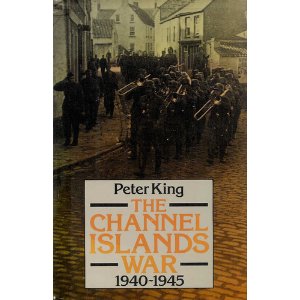 The Channel Islands
at
War

The right of Peter King to be identified as author of this work has been asserted by him in accordance with the Copyright, Designs and Patents Act 1988.

A Selected Chronology of Events
in the Channel Isles

Part 1 The Sound and Fury of Battle

Part 2 Ruled by the Third Reich

Fig. 1 The German Government of the Channel Islands
39

Fig.2 Some examples of black market prices
69
Fig.3 Camps and prisons in Europe to which Channel Islanders

were sent: Part 1
146
Fig.4 Camps and prisons in Europe to which Channel Islanders

In May 1945, Herbert Morrison, the home secretary, reported to the cabinet on his recent visit to the Channel Islands a week after they had been liberated from five years of German occupation. 'Nobody', said Morrison, 'who has not lived under the Nazis can fully realize what this means'. It is important in studying such a situation as an enemy occupation, with its undertones of hatred and treachery, anger and guilt, not to fall into the role of an armchair critic doling out blame on all and sundry for acting as they did, or for failing to take actions which seem obvious to us with the benefit of hindsight. What each of us might have done under Nazi rule is unknown because mainland Britain did not have the same experience. If Hitler had landed, brave people and cowards might have been found in all kinds of surprising places.

Evidence is part of the historian's craft and, when it is lacking, although reasoned inferences can be drawn it is important to realize that without specific evidence one cannot be absolutely sure. There is hardly a part of this book where this does not apply. There was no Royal Commission in 1945. The official history was only commissioned in 1970, and mention of the Islands in standard works on collaboration, resistance, and Hitler's New Order is noticeably lacking. The official history drew attention to gaps in the records of the Military government or
Kommandantur,
and of Organization Todt that ran most of the camps. SS records are noticeably reticent about their camp, Sylt, on Alderney, and the German authorities are still cagey about disclosing details of SS trials.

Island records too, are sparse, particularly the police files. Unlike the rest of occupied Europe, the Island governments made no effort in the 1940s to collect information about either collaboration or resistance. There is even a lack of
memorials to escapers, Jews, resiste
rs, or those who lost their lives. Herbert Morrison told the cabinet that atrocities would be investigated, but many of the statements taken then have vanished for 'lack of space', and even official reports have disappeared. An investigation into possible collaboration was carried out, but in November 1946, the next home secretary, Chuter Ede, said there would be no prosecutions. Only twelve cases had even been considered. The records of evidence taken in this matter remain closed until 2045. In spite of investigations by Major Pantcheff and others no one was tried for war crimes. Eight guards were later punished for killing two Alderney Todt prisoners in transit at Sollstedt. From this lack of official response it would seem that the Islands, uniquely in Fortress Europe, experienced neither

the evil of Nazi cruelty nor the shame of collaboration.

The last time a general history of the Islands was written, and it was a good one, was by Alan and Mary Wood in 1955. The long-delayed official history by Charles Cruickshank came out in 1975. Although it had valuable material from German and British government records, and sheds much light on the official reasons for certain events, it has little to say about the issues of collaboration and resistance, surely central to any occupation history? It makes no attempt to assess in numerical terms the crimes and suffering of the times, and mentions very few of the well-authenticated cases of cruelty and death. Islanders who died in Europe
are
almost completely ignored, for example. It is essentially an administrative history which makes no use of detailed diaries of events deposited in the Imperial War Museum which confirm the picture presented by other well-known contemporary' sources.

This is surprising because the occupation has become part of Channel Islands' life. What the Germans left behind has become a major tourist attraction with numerous museums containing items like informers' letters. Many an occupation tale is told in the bars of St Helier and St Peter Port, and there has been a continuous stream of diaries, articles and books. Some of this material is unhistorical, containing factual errors such as confusing the
Feldpolizei
with the Gestapo and statements which are extreme or unproven. Nevertheless, this contemporary information, by and large presents a different picture from the one put forward by the Island governments, the British government, or in the official history.

For the first time this book brings together the official story and the evidence accumulated over the years of what happened to ordinary Islanders. In particular I have used articles from the
Channel Islands Occupation Review (CIOR),
previously neglected in histories of the time. As a continuous commentary on events I have selected one contemporary record from each of the Islands which internal evidence suggests is largely accurate, and not written in a hysterical state of mind. For Sark I have relied on Julia Tremayne's little-used lette
rs, for Guernsey on Mrs Cortvrie
nd's account based on a diary and published in 1947, and for Jersey on the well-known detailed account by Leslie Sinel published in 1945. In 1985 the diary of Baron von Aufsess, a Jersey official of the
Kommandantur
was published providing an invaluable check from the other side, and this confirms in many ways the grim picture of occupation given in this book. Although I do not agree with some of the allegations, f
acts, or surmises in Solomon Ste
ckoll's book on Alderney, it contains important documents which, although fragmentary, substantiate the darker side of occupation life.

What has emerged is, I hope, a new picture of total war in the Islands. They were part of Hitler's New Order. They were a massively fortified and heavily garrisoned fortress. They contained a large population of Todt workers and POWs. They were in the Channel war zone seeing air and sea warfare in all five years of occupation. The people experienced every misery of their compatriots in mainland Britain with the Germans living next door. Thousands went through the war divided from their families by evacuation and deportation,
and had no leave-time meetings
with their serving relatives. The treatment of the concentration camp inmates, the Todt workers, and certain categories of foreigners, like Russian POWs or French escapers, meant that few Islanders avoided contact with brutality and degradation. Most of the Islanders, except for a privileged few, suffered degrees of deprivation in every essential of civilized living for far longer than is often realized, and remained in bondage and suffering in spite of limited measures to help them taken from December 1944. Some Islanders may be annoyed by what I have written. I have tried to stay clear of Island history buffs and form conclusions based on general resistance and wartime history: to judge the Islands in the light of what we know of German methods and resistance history today. It is often not a pretty story.

Kaiser's Holocaust by Unknown
The Last Camel Died at Noon by Elizabeth Peters
Keeping Sweets by Cate Ashwood
El hombre anumérico by John Allen Paulos
The Benevent Treasure by Wentworth, Patricia
Healing the Highlander by Melissa Mayhue
Jubal Sackett (1985) by L'amour, Louis - Sackett's 04
Losing Eva (The Eva Series Book 2) by Jennifer Sivec
The Colors of Love by Grant, Vanessa
The Tapestry in the Attic by Mary O'Donnell
Our partner