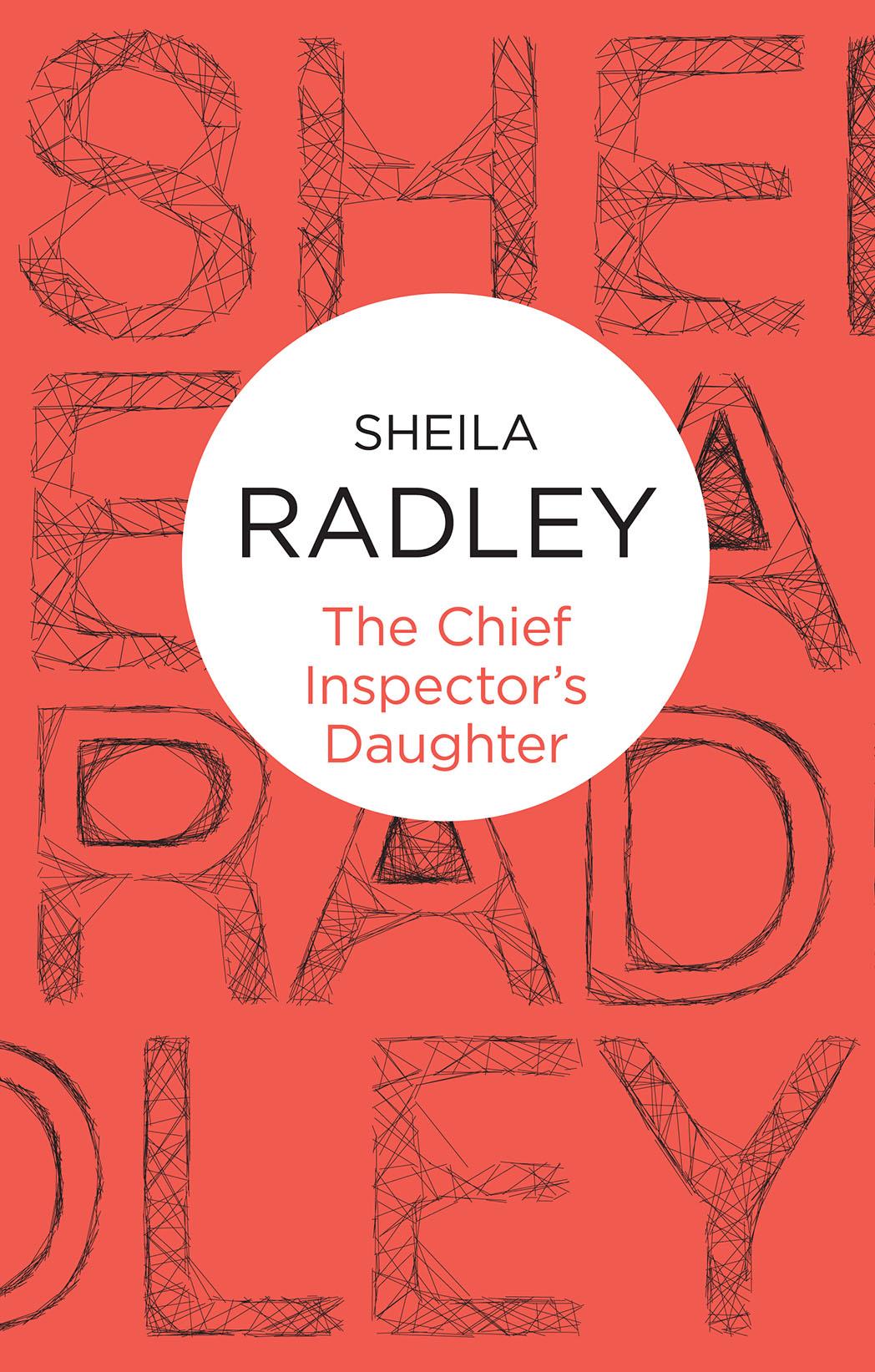 Sheila Radley was born and brought up in rural Northamptonshire, one of the fortunate means-tested generation whose further education was free. She went from her village school via high school to London University, where she read history.

She served for nine years as an education officer in the Women's Royal Air Force, then worked variously as a teacher, a clerk in a shoe factory, a civil servant and in advertising. In the 1960s she opted out of conventional work and joined her partner in running a Norfolk village store and post office, where she began writing fiction in her spare time. Her first books, written as Hester Rowan, were three romantic novels; she then took to crime, and wrote ten crime novels as Sheila Radley.

Jasmine Woods, the well-known novelist, was found dead yesterday morning at her isolated Suffolk home, Yeoman's, near Breckham Market. The body was discovered by Miss Alison Quantrill, who has for the past six weeks been working as the novelist's secretary. Miss Quantrill, younger daughter of Chief Inspector Douglas Quantrill, head of Breckham Market CID, was not available yesterday for comment. A police spokesman has confirmed that the incident is being treated as murder. A man was at divisional headquarters last night, helping police with their enquiries.

âAnthrax,' thought Douglas Quantrill gloomily as he watched his daughter step down from the London train wearing a coat of shaggy hide that looked as though it had been transferred half-cured from a particularly unsavoury Afghan goat.

Alison, the younger of his daughters, had always been Quantrill's favourite. Knowing that she needed a new winter coat, he had given her part of an income-tax rebate as an unusually generous combined birthday and Christmas present, with instructions to buy herself a sheepskin. What he had had in mind was the kind of sensibly English fleece-lined suede jacket that he had recently bought his wife; he might have known, he sighed to himself as he turned up his raincoat collar against the February sleet and began to tramp down the long platform, that Alison would go for something more outlandish and impractical. It was unbecoming, too: she was small, and the combination of the over-long shaggily lined coat with the straight hair that fell over her downcast face gave her the sad appearance of a neglected Skye terrier.

A male fellow-passenger helped her with her luggage, and Quantrill saw her push aside her dark hair and dredge up a smile of thanks with obvious difficulty. Now she stood waiting for her father, forlorn, surrounded by the suitcased remains of her bid for independence.

Quantrill sent his heart out to her, and hurried after it. From behind him he heard the thump of footsteps, and a fit-looking middle-aged man passed him in a burst of speed, one hand hoisting an umbrella, the other outstretched. A fair girl of Alison's age came running up the platform to meet the man, and they embraced enthusiastically.

âDarling â lovely to see you!'

âGreat to be home again. Are you and Mummy well? You look well â oh, it's good to come home!'

They moved past him towards the exit, beaming fondly at each other under the umbrella, arms entwined, and Quantrill felt a touch of irritable envy: greetings were less ostentatious in his family.

He came up to his daughter, smiled at her, and bent to press his mouth shyly and awkwardly on her cold cheek. âHallo, Alison.'

He was shocked by the thinness of her face and by the huge melancholy of the eyes that were green as his own. He longed to be able to hug his daughter as that other father had done â as he himself had done when his children were small. But as the girls had grown, so a reserve had grown up on both sides; on their mother's side, too, because Molly was from a family as traditionally undemonstrative as the Quantrills. Embraces and endearments between adults, he reflected, seemed to come more naturally to established middle-class families than to uneasily indeterminate ones like his own. A pity, but there it was; too late to try to do anything about it now.

He seized the two large suitcases and set off down the platform, turning his head to make a conventional enquiry. Breckham Market station is on the main line from Liverpool Street to Yarchester and the journey from London takes less than two hours, but Quantrill was so firmly rooted in Suffolk that he could never rid himself of his childhood impression that London was a distant foreign country.

âDid you have a good journey?'

Alison pushed a strand of damp hair out of her eyes. âYes, thanks,' she murmured listlessly. Her coat had a single inadequate fastening and she clutched the edges together, shivering in the stinging wet wind.

âGood!' Quantrill heard the false heartiness in his voice and moderated it slightly. âWell, we'll soon have you home.' He nodded to the ticket collector at the exitâ â'Evening, Jack'; â'Evening, Mr Quantrill' â and hurried down the station steps and across the coal sidings to the car-park. Alison trailed behind, burdened less by a bulging hessian bag that carried
fin-de-siÃ¨cle
advertisement for French bicycles than by her own unhappiness.

As he drove off, with the wipers working overtime, Quantrill turned up the car heater. Then he glanced sideways at as much as he could see of his daughter's profile behind the dark fall of her hair. âI'm glad you've come home,' he said gently.

She closed her eyes and nodded, not trusting herself to speak until she had pressed the side of her knuckle hard against her set lips. Then she said in a taut voice, âI suppose Mum thinks the worst?'

Her supposition was right, but Quantrill temporized loyally. âYour mother's been very worried,' he said. âIt's only natural â we both were. We could tell from your letters that something was amiss, but we didn't know what â¦ We'd have liked to help, if only we'd known how â¦'

Alison gave a small, bitter laugh. âThere was no way you could do that, either of you.' She turned towards her father, lifting her chin proudly. âI'm not pregnant, you know. Haven't ever been. There are no â¦ complications for Mum to have hysterics about. If the neighbours ask, I've decided to come home for a bit â that's all anyone needs to know.'

âThat's all anyone will know,' Quantrill assured her, trying to disguise his relief. âAnd your Mother and I are both very pleased to have you back.' He opened the window of the car a little to disperse the rank smell that was rising from Alison's wet coat. âA quiet rest at home will do you the world of good.'

She shook her head. âNo â I don't want to hang about brooding. I'd like to get a job as soon as possible. Any chance, do you think?'

âSure to be.' Quantrill was proud of his younger daughter's five âO'and one âA'levels, her ability to audio-type with conscientious accuracy, and the secretarial job she had had at the BBC ever since she first went to London, eighteen months ago. âAny local employer will jump at the chance of having a secretary with your qualifications and experience. Not that you're going just anywhere, mind â I'm not having you in one of those factory offices up on the industrial estate. I'll make a few enquiries in the town first: the district council offices, perhaps, or one of the banks â¦'

Now that Alison was safely beside him, neither aborted nor pregnant, Quantrill felt almost light-hearted. He had, during the last few weeks, worked up such a hatred against the unknown man who was causing his daughter's unhappiness that he had been shocked by the realization of his own capacity for violence. It was one thing to acknowledge, as he did freely and frequently, that policemen are human beings and as prone to criminal impulses as anyone else; quite another to realize that if he were ever to meet this man he would almost certainly want to inflict grievous bodily harm on him. And Quantrill was afraid of violence. Not of getting hurt, because that was an occupational hazard, but of losing his temper; of losing control and lashing out blindly, ferociously. That was one of the ways that could lead to murder.

But now, with Alison home, he felt that his double burden â an uneasy conscience as well as concern for her welfare â had been lifted. True, the poor girl seemed heartbroken; but nineteen-year-old hearts, he thought confidently, mend with surprising speed.

âAnd you'll soon be able to pick up your social life again,' he said. âAll those old school friendsâ'

She shrugged. âMost of the ones I'm in touch with are away, at college or in London or nursing or something. Anyone who's still in Breckham seems to be either engaged or married already, and in the circumstancesâ'

âAh, yes,' said Quantrill hastily. And then he had an idea: âI don't think you've met my sergeant yet, have you? Martin Tait â one of the bright boys, university and police college and all that; twenty-five, and he'll probably make superintendent by the time he's thirty. Pushy, of course, and a bit too pleased with himself, but he's a good detective: doesn't miss much. You must meet him, and see whether you like him.'

Wolf's Desire by Kirk, Ambrielle
Playing the Field by Janette Rallison
Of Blood and Honor by Chris Metzen
An Early Wake by Sheila Connolly
The Idea of Home by Geraldine Brooks
The Consequence by Karin Tabke
How We Do Harm by Otis Webb Brawley
CardsNeverLie by Heather Hiestand
Betrayal (The Forever Series) by Eve Newton
Escaping the Giant Wave by Peg Kehret
Our partner