Read The Chieftain: Victorian True Crime Through The Eyes of a Scotland Yard Detective Online

The Chieftain: Victorian True Crime Through The Eyes of a Scotland Yard Detective 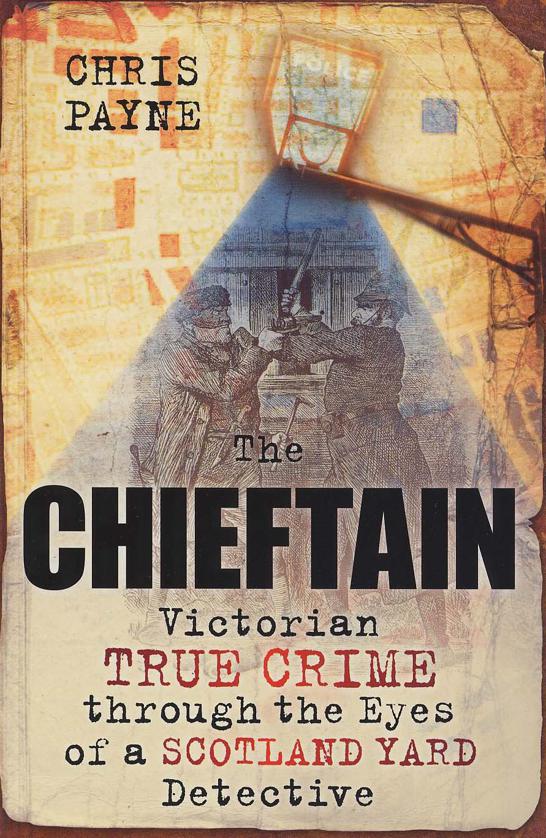 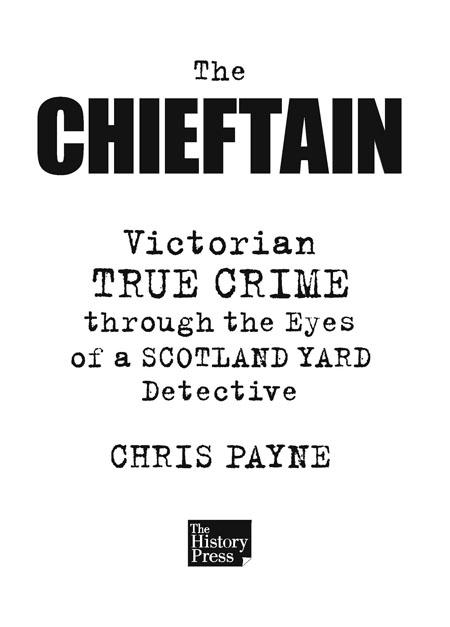 To Meg, Kate and Rob

1  The Journey to Scotland Yard

3  The Fenians are Coming

5  The Tichborne Claimant, Theft and Fraud

This book has only been feasible because of the patience, support and encouragement that I have received from my wife Meg and our children, Robert and Katherine. The realisation that one of my great-great-grandfathers had been a detective in the London Metropolitan Police emerged from research that I was undertaking on family documents written by my grandfather, Charles Payne. Without these papers and the care taken to preserve them by my grandmother, Ida Payne, and my father, Rupert Payne, there would have been no such book.

The research that I have undertaken has been greatly assisted by a number of outstanding national and regional archives and libraries. In particular, my thanks go to the following organisations and their staff: The National Archives (Kew), the British Library (St Pancras) and the British Newspaper Library (Colindale), Westminster City Archives, the Parliamentary Archives London, the Metropolitan Police Historical Collection, Cumbria Libraries (Kendal), Lancashire Libraries (Carnforth), Warrington Library, the Bodleian Library at Oxford University, the University of Lancaster Library and the Library and Museum of Freemasonry. Online facilities that have been invaluable have included Wikipedia, Ancestry.co.uk, Old Bailey Proceedings online, the Cengage digital archives of
The Times
and nineteenth-century British Library Newspapers.

I have been helped and advised by several people who have read and commented on draft sections of the book. Clive Bravery and Robert Payne have kindly read all chapters and provided helpful comments. Vincent Comerford, Padraic Kennedy, Rohan McWilliam, Canice O’Mahony, Michael McCarthy, Stefan Petrow and Niall Whelehan have given me the benefit of their academic expertise on individual chapters. Particular thanks go to Niall Whelehan for introducing me to the first-hand accounts of the Fenian conspiracy written by Octave Fariola, and to Padraic Kennedy for providing me with references to George Clarke that he had located in the National Archives of Ireland. Other individuals who have provided information and encouragement that has been beneficial to the content and progress of this book include: Nene Adams, John Archer, Phillip Barnes-Warden, the late Maggie Bird, Phillip Bonney, Andrew Brooks, Sioban Clarke, His Honour Judge Peter Clarke, Nanette and Michael Crenol, Paul Dew, Gillian and Graham Douglas-Smith, Rod Elwood, Clive Emsley, Anne Featherstone, Martin Hagger, John Hicks, Carla King, Joan Lock, Peter and Jonathan Meiklejohn, Alan Moss, Neil Paterson, Paul Rason, Keith Skinner, Linda Stratmann, Eileen Summers, Donald Thomas, Margaret Webb and the members of the South Lakes U3A Genealogy Group. The final content and style, as well as any overlooked errors and omissions are, of course, my responsibility.

I would also like to thank Diane Clements of the Library and Museum of Freemasonry, Freemasons’ Hall, London, for permission to include information on George Clarke’s membership of the Freemasons. For advice on copyright issues affecting text and images from documents held in the National Archives, I am most grateful for the guidance received from Tim Padfield and Paul Johns.

I am most grateful for permission to include extracts from the following sources:

Images have been reproduced with the permission of the copyright or collection holders, where appropriate. Thanks are due to:

Getty Images – for photographs of Charles Bravo and Florence Bravo

Peter Meiklejohn – for the photograph of John Meiklejohn

The Parliamentary Archives, London – for photographs of the Tichborne Claimant and Sir Richard Assheton Cross

Every effort has been made to secure necessary permissions to reproduce copyright material, though in some cases it has proved impossible either to trace copyright holders or to generate a response. If any omissions are brought to my notice, I will be pleased to include appropriate acknowledgements on reprinting. A small number of corrections to the original text have been incorporated prior to the production of the ebook format in 2013.

Finally, I would like to express my gratitude to Reuben Davison for introducing the concept of this book to The History Press, and to thank Simon Hamlet, Lindsey Smith, Chrissy McMorris, Abbie Wood and the team at The History Press for their enthusiasm and skill in generating the finished product.

Many of us enjoy a good crime story and can readily recall the names of our favourite fictional detective, whether it be Sherlock Holmes, Sexton Blake, Philip Marlowe, Hercule Poirot, Maigret, Morse, Rebus, Wallander or many others. Fewer of us, I suspect, can recall the names or exploits of those who investigate crime in the real world. Thus when I discovered that one of my ancestors, George Clarke, had been a detective chief inspector in the London Metropolitan Police in the 1870s, it meant little to me. It was only later that I found some information that was sufficient to persuade me that his story would be an intriguing one to investigate. During my research, it soon became obvious that George Clarke had been a leading figure at Scotland Yard and was well known by the Victorian London public, especially those who crossed the boundary from legality to crime. Indeed, when it comes to Victorian detectives Clarke was the real thing, but his story has essentially remained untold until now. This book sets out to open up the world of Victorian crime and the diverse investigations of the early Scotland Yard detectives, through Clarke’s eyes and experiences.

In 1840, at 21 years of age, George Clarke joined the London Metropolitan Police. After twenty-two years’ service he had only achieved promotion to sergeant, but, in 1862, he was transferred to the small group of nine detectives that then constituted the plain-clothed detective department at Scotland Yard; the only detectives within the Metropolitan Police at that time. By May 1869 Clarke had risen to the rank of detective chief inspector and, by his retirement in January 1878, he had been second-in-command of the department for nine years. By that time he had become known to colleagues and to members of the criminal fraternity as ‘The Chieftain’ or ‘The Old Man’.

During much of his time as a detective (particularly between 1864 and 1878) Clarke’s career can be tracked reliably, not least because he was the only ‘George Clark(e)’ within the very small team in the Scotland Yard Detective Department. His involvement in major cases required the preparation of reports, several of which, bearing his clearly identifiable signature, have survived in the National Archives. In addition, the universal interest in crime as a topic for the press of the day has ensured that Clarke’s activities were well reported by the national and provincial newspapers of that era. Information on Clarke’s earlier life between 1818 and 1864 (the subject of Chapter One) is less readily accessible and its interpretation requires some informed speculation.

From 1864 onwards (the subject of Chapters Two to Seven), Clarke played a substantial part in many of the major criminal investigations and trials of the mid-Victorian period. These included: the hunt for the perpetrator of the first murder committed on a British train; the investigation of a headless corpse at Plaistow Marshes; the policing of Irish terrorism (including Clarke’s role in the arrests of a leading mercenary and a Fenian arms organiser); investigating theft at Windsor Castle and the Earl of Cardigan’s premises; breaking up gangs of foreign burglars; providing important evidence that contributed to the conviction of that greatest fraudster of his era, ‘the Tichborne Claimant’; enforcing legislation for the regulation of betting and the control of turf frauds; pursuing investigations into ‘baby farming’; solving a series of financially damaging arson attacks in the East End; eventually bringing to justice the murderer Henri de Tourville in a court in Austria; leading the police inquiry into the suspicious death of Charles Bravo (a case which titillated the British public in 1876 and has subsequently provided fertile ground for the imagination of several true-crime authors); and many other cases. Trusted by his superiors, Clarke was highly regarded and considered a safe pair of hands, until two ruthless and clever convicted fraudsters sought to offset their heavy prison sentences by giving evidence that corruption existed within the ranks of the Scotland Yard Detective Department.

British detectives have achieved only a passing mention in many accounts of Victorian crime despite the public prominence they achieved in the press of their day. Kate Summerscale’s book
The Suspicions of Mr Whicher
is a rare exception in providing a centre-stage description of a detective’s role.
2
Detective Inspector Whicher was a Scotland Yard colleague of Clarke from 1862 until Whicher’s retirement in March 1864. In the essentially chronological sequence of events that I have recounted in this book, I have likewise sought to ensure that Clarke and his police colleagues are in the spotlight again, whether their roles were heroic, merely competent, incompetent or criminal!

Keeping Your Head After Losing Your Job by Robert L. Leahy
The Seven Dials Mystery by Agatha Christie
Without a Front by Fletcher DeLancey
Tina Mcelroy Ansa by The Hand I Fan With
Shadow Demons by Sarra Cannon
Saint Jack by Paul Theroux
Billiards at Half-Past Nine by Heinrich Boll, Patrick Bowles, Jessa Crispin
Lost and Found by Alan Dean Foster
3#Awakened by the Vampire Prince (Thorn) by Hartnady, Charlene
Chaotic by Kelley Armstrong
Our partner