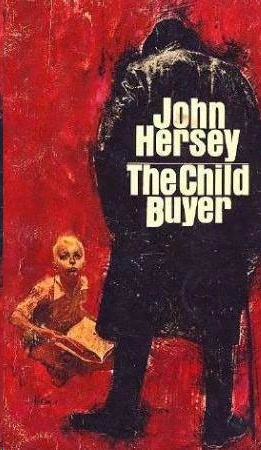 THIS IS A BORZOI BOOK, PUBLISHED BY ALFRED A. KNOPF, INC.

Copyright © 1960 by JOHN HERSEY. All rights reserved. No part of this book may be reproduced in any form without permission in writing from the publisher, except by a reviewer who may quote brief passages in a review to be printed in a magazine or newspaper. Manufactured in the United States of America. Published simultaneously in Canada by McClelland & Stewart, Ltd.

First and second printings before publication

"Cheerfulness keeps up a kind of daylight

in the mind, and fills it with a steady

ON EDUCATION, WELFARE, AND

Senator MANSFIELD. The committee will come to order in Executive Session. Mr. Broadbent, will you please explain the purpose and intent of the hearings we will begin tomorrow morning?

Mr. BROADBENT. Gladly, Mr. Chairman. Tomorrow we will begin to look into a situation that has developed in the last few days in the township of Pequot. It is alleged that on October sixteenth, that is, one week ago yesterday, a certain Mr. Wisscy Jones entered the town of Pequot from out of State, and that

he did conspire with persons in the town in an attempt to purchase a male white child, ten years of age, named Barry Rudd, advancing unspecified educational and patriotic purposes for the proposed transaction.

Senator SKYPACK. Was the deal completed?

Mr. BROADBENT. If you'd let me finish my—

Mr. BROADBENT. This matter falls within the competence and purview of this committee on three accounts. First, a State law of 1829, still on the books, prohibits the purchase or sale of persons. The Pequot case now raises the question whether this committee should recommend that the law be repealed, or modified in any way, or let stand and be strictly enforced. I should warn you, the Federal people may get into the act, on a Thirteenth Amendment involvement; I advert to a possible allegation of 'involuntary servitude/ as it is put. Second, there is a possible morals angle, though we aren't quite untangled about this part of it; our investigator is trying to run it down today. Third, we have the responsibility of this committee for the field of education, and we are confronted by these assertions by the man Wissey Jones that he has quote educational unquote reasons for the proposed transaction. The exact nature of these reasons, together with the quote patriotic unquote purposes of the deal—we're not clear on them. The man Wissey Jones represents himself as an executive of the United Lymphomilloid Company, based, as you may know, in the southwestern part of the United States, and his claim is that the boy child is being bought for a highly classified defense project. However, we are not entirely satisfied with the man Wissey Jones's veracity or credibility; he is a very unusual type of individual.

Senator VOYOLKO. Don't get it. What's this all about?

Senator MANSFIELD. Jack, would you mind translating for Senator Voyolko?

Senator SKYPACK. Look, Senator, this guy tries to buy this kid. We want to know how come.

Senator VOYOLKO. Why'n't he say so? I wish you'd talk in good plain American, Mr. Broadback. Three quarters what you say, it's Greek.

Senator MANSFIELD. I think it would help not only the Senator from Winfield County but all of us, Mr. Broadbent, if you would try throughout these upcoming hearings to keep things orderly. You've heard me say before, the best way to get to the end in a hurry is to begin at the beginning. If you have a fault-Mr. BROADBENT. You have to realize, sir, that with people constantly interrupting, bringing in new questions—

Senator MANSFIELD. The word I used was 'try.'

Mr. BROADBENT. Mr. Wissey Jones was first seen entering the town of Pequot on the sixteenth instant on a collapsible motorcycle. He was wearing some golf knickerbockers, or plus fours, of a vintage so old—

Senator SKYPACK. Now just one minute, young fellow. What kind of a motorcycle was that?

Mr. BROADBENT. You see, Mr. Chairman. It's not easy—

Senator MANSFIELD. I was wondering about that motorcycle myself.

Mr. BROADBENT. This is a European-type machine, as I understand it, rather light-weight, which unlocks in the middle, so to speak, in such a way that the two wheels fold against each other. Makes a compact bundle. The wheels are light, the tires scarcely more than bicycle tires, and the motor a tiny one-lunger, so a man can easily lift the whole thing up, especially when it's folded. Then when you want to ride, you unfold it, open it out, and it locks with the two wheels in line the regular way. Several persons in the lobby of the Mulhausen Hotel in Pequot witnessed a sharp altercation, Mr. Wissey Jones's bap-

tism of fire in the town, one might say, when after registering he attempted to carry his machine, folded, under his arm into the passenger elevator. As I was trying to tell you, this gentleman had some mighty old-fashioned pants on. Also a pork-pic hat. Turtle-neck sweater, black. His luggage was a haversack, or hiking bag, strapped to his shoulders, and a pair of saddlebags that rode over the rear wheel of this machine. I think you can already see why we've got a little trouble about credibility here. Anyway, he lit into the elevator boy—

Senator SKYPACK. They have elevator girls in the Mulhausen down there. In fact, all the Mulhausen chain, they wear these black satin slacks, or pedal pushers.

Mr. BROADBENT. I'm going on preliminary information the investigator shot up to me last night, Senator. Tin doing the best I can.

Mr. BROADBENT. Mr. Jones belabored the elevator boy, or girl, verbally, and was then heard shouting and seen gesticulating with his free hand at the desk. As you may know, the hotel down there, formerly the Depot Hotel, has been modernized— Mulhausenizcd, I think they call it, and the desk has this long slab of black pink-veined soapstone supported on interlacing aluminum M's, and overhead a neon sign, Guest Representative, which is what they call the room clerk, and here's this stranger, with the neon sign throwing a trembling violet light on his pearl-gray pork-pie, and his folded motorcycle under his arm, shouting at the fellow behind the desk that vice-presidents of United Lymphomilloid don't ride in service elevators. Mr. Salamcnko, the duty clerk at the desk at that time, informed our investigator that the man Wissey Jones does not look you in the eye, but fixes his stare above your eyes, at about the level of the hairline, and keeps—

Senator SKYPACK. If you're lucky enough to have a hairline.

Senator SKYPACK. All right, Broadbent. Can't you take a rib?

Mr. BROADBENT. The man Wissey Jones, if he is what he represents himself to be, is something rather unusual in the line of a businessman—intellectually keen, said to be bright as a new penny. I guess all kinds of people have been going into business since the war.

Senator VOYOLKO. Mr. Broadback, sir, you mind telling me what you're leading up to?

Mr. BROADBENT. If the Chairman will indulge me ... Gentlemen, I'm not a crystal ball on this picture. I'm going along on sparse details, because our investigator has only had a few hours, two working days, to be exact, in Pequot, and I'm trying to pick up the threads.

Senator MANSFIELD. Shouldn't we be a lot clearer on our facts before rocketing along and holding hearings?

Mr. BROADBENT. There has been violence in the town there, stemming straight from these matters. That's why—

Senator SKYPACK. Now you're talking, Broadbent. What sort of trouble?

Mr. BROADBENT. I don't want to go too fast, here. The information—

Senator SKYPACK. Give, Broadbent. Let's not get coy.

Mr. BROADBENT. I've told you I'm hazy on the details. It seems anyway a bomb was thrown.

Mr. BROADBENT. I really would rather wait for fuller material,

Mr. Chairman. ... I understand this was not the only incident, there was other trouble as well, but I'll have better information by tomorrow. At any rate, what I have in hand is enough, I can assure you, to warrant an urgent inquiry by our committee.

Senator SKYPACK. All this rhubarb, why nothing in the papers?

Mr. BROADBENT. There's only a weekly down there in Pequot, the Pequot Drummer, and I guess—

Senator MANSFIELD. Are you absolutely sure, Mr. Broadbent, that you're not indulging your proclivity for building things up? Just a little? You remember the Hendport hearings.

Mr. BROADBENT. On the Bible, Mr. Chairman, you have a duty and a responsibility to get into this situation.

Senator MANSFIELD. Who's going to put us straight on the facts?

Mr. BROADBENT. The main witnesses, as things are shaping up, will be the man Wissey Jones himself, of course; the boy he's trying to purchase, Rudd's the name; and the boy's parents; then there's the Superintendent of Schools and possibly some other school people on the alleged educational angle; a certain young boy who is said to be a close associate or accomplice of the Rudd youngster; and perhaps two or three others.

Senator MANSFIELD. You can produce these witnesses tomorrow morning?

Mr. BROADBENT. Oh, yes, sir, some of them, enough to make a good start.

Senator MANSFIELD. Where will we sit?

Mr. BROADBENT. We better be in Committee Chamber 202, there's liable to be some interest as we go along.

Senator MANSFIELD. I hate that room. Curving row of thrones we have to sit in, and the amphitheater effect for the spectators. Makes me feel like a proconsul at a hand-to-hand between martyrs and lions.

Senator SKYPACK. Thin skin, Aaron. Why don't you relax and enjoy it?

Senator MANSFIELD. You mean to say you've given out another of your releases?

Mr. BROADBENT. Senator, a man who goes around buying boys—

Senator MANSFIELD. I hope that for once we can proceed with order and decorum. In an orderly way, Mr. Broadbent. Keep things in order. And I would hope that there would be no browbeating of witnesses.

Senator SKYPACK. All right, Aaron, let's don't forget you can do a lot of harm by being namby-pamby, too. We can sec what develops.

Senator MANSFIELD. But I would hope—

Senator SKYPACK. And don't forget, Aaron, those headlines don't do Senator Mansfield any harm back in the hustings.

Senator MANSFIELD. I suppose there's a measure of truth—

Senator VOYOLKO. So what's the picture? Room 202—what time?

Mr. BROADBENT. I have the room for ten.

Senator MANSFIELD. I guess we can recess, gentlemen.

(Whereupon, at 4:50 p.m., Thursday, October 24, the hearing was recessed, subject to the announced recall of the Chair.)

Senator MANSFIELD. The committee will be in session. I will have to remind the spectators that you are guests of the committee, and ask you to remain orderly at all times. We're very crowded in here, and we're going to go along with good order and decorum. Thank you.

Mrs. Rudd, will you stand to be sworn?

Do you solemnly swear the testimony you are about to give in the matter now pending before this committee shall be the truth, the whole truth, and nothing but the truth, so help you God?

Mr. BROADBENT. Will you kindly identify yourself for the record, Mrs. Rudd?

Mr. BROADBENT. Of Pequot? Your address?

Mrs. RUDD. We live in the Slatkowski block on River Street.

Mr. BROADBENT. And that's in Pequot?

Mrs. RUDD. That is correct.

Senator MANSFIELD. Don't be afraid, ma'am. Speak your mind. We try to be fair and square here.

The Elegance of the Hedgehog by Muriel Barbery, Alison Anderson
Broken Wings by Viola Grace
Calico Captive by Elizabeth George Speare
The Rancher's Bride by Stella Bagwell
Always a Marine 21 - Lest Old Marines Be Forgot by Heather Long
Bajo el sol de Kenia by Barbara Wood
Breaking Stalin's Nose by Eugene Yelchin
This Is Where I Am by Karen Campbell
When One Man Dies by Dave White
The Detective's Secret by Lesley Thomson
Our partner