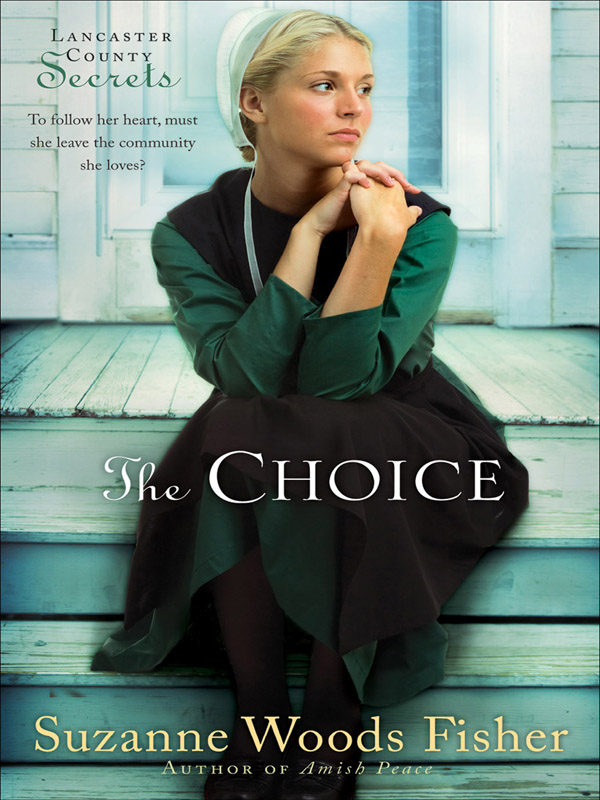 Scripture used in this book, whether quoted or paraphrased by the characters, is taken from the King James Version of the Bible; or
The Message
by Eugene H. Peterson, copyright © 1993, 1994, 1995, 2000, 2001, 2002. Used by permission of NavPress Publishing Group. All rights reserved.

Published in association with Joyce Hart of the Hartline Literary Agency, LLC.

To my family, whom I love.

Carrie Weaver tucked a loose curl into her cap as she glanced up at the bell tower in Lancaster’s Central Market. The clock had struck 2:00 p.m. more than ten minutes ago, and an English couple was haggling with her stepsister Emma over the price of a crate of strawberries. After all, the man was saying, the market was closing for the weekend. “Certainly, you Plain folks wouldn’t want this fruit to go to waste now, would you? Tomorrow being Sunday and all?” He rested his hands on his round belly and fixed his gaze on Emma, a satisfied look on his red face—as red and ripe as a late summer tomato—as he waited for her to buckle.

Carrie saw Emma purse her lips and hook her hands on her hips in that determined way and knew where this standoff was headed. Emma wouldn’t drop the price of her strawberries to anyone, much less an Englisher whom, she was convinced, had a lost and corrupted soul. Her sister would plant her big feet and squabble over the price of strawberries until the sun set.

Carrie picked up the crate and handed it to the man. “Abg-schlagge!”
Sold!

The man and his wife, surprised and delighted, hurried off with the strawberries as Emma spun to face Carrie. She lifted her hands, palms out. “Have you lost your mind? My strawberries are worth twice that price! What were you thinking?”

“I’m thinking that it’s past two and the market has closed and the van is waiting.” Carrie pushed the leftover crates of red ripe strawberries into the back of the van of the hired driver and slammed the door shut, pinching her thumbnail. Wincing from the pain, she knew she didn’t dare stop to get ice. There wasn’t a moment to waste.

“Dummel dich net!” Emma muttered as Carrie opened the passenger seat door for her.
Don’t be in such a hurry!
“You’ve been as jumpy as a jackrabbit all morning.”

Carrie reached out an arm to clasp her younger brother on the shoulder, pulling him back as he started to climb in the van behind Emma. “I need to run an errand and take the bus home later today. Andy’s coming with me.”

Andy’s eyes went round as shoe buttons, but he followed Carrie’s lead and hopped back out of the van.

Emma twisted around on the seat. “What errand?” she asked, eyes narrowed with suspicion. “You know your dad wants you home to visit with Daniel Miller.”

Carrie blew out a big sigh. Silent, solemn Daniel Miller. He and his father, Eli, were staying with the Jacob Weavers this summer. Eli Miller and Jacob Weaver made no secret of the fact that they had a hope for her and Daniel. Well, they could hope all they liked but Carrie’s heart was already spoken for. Spoken for and claimed, and the thought warmed her.

“If you think Daniel is such a looker, why don’t you visit with him?” Carrie stepped back from the van to close the door. That had been mean, what she said to Emma, and she reached out to give her sister’s arm a gentle squeeze in apology before she swung the door closed and the driver pulled away. Dear Emma, nearly twenty-seven and terrified that she would end up an old maid. Carrie felt a smile pull at her mouth and fought it back, as an unbidden image of a large celery patch popped into her mind—Emma and her mother, Esther, grew celery in the family garden in hopes that this would be Emma’s year.

Carrie shook off her musing and grabbed Andy’s hand and hurried to the bus stop. She wanted to reach the Lancaster Barnstormers’ stadium before Solomon Riehl would start pitching. Last night, Sol told her he might be a closing pitcher in today’s scrimmage, so she should be in the stands by the last few innings.

She shaded her eyes from the sun to watch for the bus. “It’s a surprise for your birthday.”

Carrie looked at him and tousled his hair. “Consider it an early birthday present.” She knew she wouldn’t be here on his birthday.

As Carrie and Andy climbed on the bus and sat among the English, she felt the happiness of her secret spill over her. She didn’t even mind the pain radiating from her throbbing thumb. She was entirely preoccupied with the conversations she had been having with Sol lately. Last week, he called her at midnight, as planned, from the phone shanty across the road from his father’s farm. During that call, he had talked to her about leaving the community and trying to make a living as a baseball player. And he told her he wanted her by his side, as his wife.

Sol had been crazy about baseball ever since he first held a ball in his hand. Although competition was discouraged on the schoolyard, Sol stood out. He could throw a ball faster, farther, and with more accuracy than anyone.

Just a few months ago, a baseball scout happened to be driving past their youth gathering and had pulled his car over to watch Sol pitch, mesmerized. The scout had quietly slipped a business card into Sol’s hand and whispered something to him.

On the buggy ride home from the youth gathering, Sol had pulled out the card and showed it to Carrie. “They’re having open tryouts next week. He wants to clock my pitch. He said he hasn’t seen a fastball like mine in years.”

Stunned, Carrie turned the card over. “You aren’t serious. Sol, you can’t try out for professional baseball. You shouldn’t even go to a game! You know that. The elders will be at your folks’ door by day’s end.”

“Not if they don’t find out,” Sol said, grinning mischievously. Then his face tightened and the smile disappeared. “I’m tired of all the ‘shouldn’ts’ and ‘can’ts’ in my life.
Can’t
go to the movies.
Shouldn’t
listen to the radio.
Can’t
ride a bicycle.
Can’t
own a car.”

Carrie gave him a sideways glance. All Sol talked about lately was how smothered he felt, being born and raised Amish. At first she felt alarmed by such talk. But she’d grown used to it and didn’t take his complaints too seriously. She was sure he couldn’t really leave his family and church behind. Or her. He would never leave her behind. Of that she was confident. “Not being allowed to own a car sure hasn’t stopped you. I still don’t know how you’ve kept that heap-of-rust you call a car hidden from your folks for so long.”

Sol’s face relaxed into a grin. “Six months now.” He turned the buggy off to the shoulder and faced Carrie, taking her hand in his. “It’s
just
a tryout. There will be plenty of other guys pitching, guys who have been training their whole life for a tryout. Most likely, I won’t even make callbacks.” He lifted her chin so she would look at him. “But I’ve decided. I’m going to go to the tryouts next week. Now’s the time in my life to have a taste of what the world has to offer. That’s what the running-around years are for, aren’t they?” He leaned over to kiss her, featherlight, on the lips, then gently rubbed his nose against hers before slapping the reins to urge the horse forward.

As the horse lunged ahead, Carrie mulled over Sol’s reasoning. Was Rumspringa a time for trying worldly things? To be tried and found lacking? Or, just by trying, did it make a person long for another kind of life than the Plain one? Her father had a saying, “Was mer net hawwe soll, hett mer’s liebscht.”
What we
are not meant to have, we covet most.

Sol laughed when she quoted her father’s saying to him and told her that even Jacob Weaver was young once. Sol made it sound so easy. He made everything sound so easy. Besides, she thought, dismissing concern about Sol’s restless nature, he probably wouldn’t be picked by that team. He’s just feeling his oats.

Talisman by S.E. Akers
Stop Dead by Leigh Russell
Point of Attraction by Margaret Van Der Wolf
The End of Christianity by John W. Loftus
Eternal Bloom - Book 5 (The Ruby Ring Saga) by Peebles, Chrissy
Half a Life by V. S. Naipaul
The Murder of Jim Fisk for the Love of Josie Mansfield by H. W. Brands
Mistletoe and Margaritas by Shannon Stacey
The Baby's Guardian by Delores Fossen
The Desert Spear by Peter V. Brett
Our partner