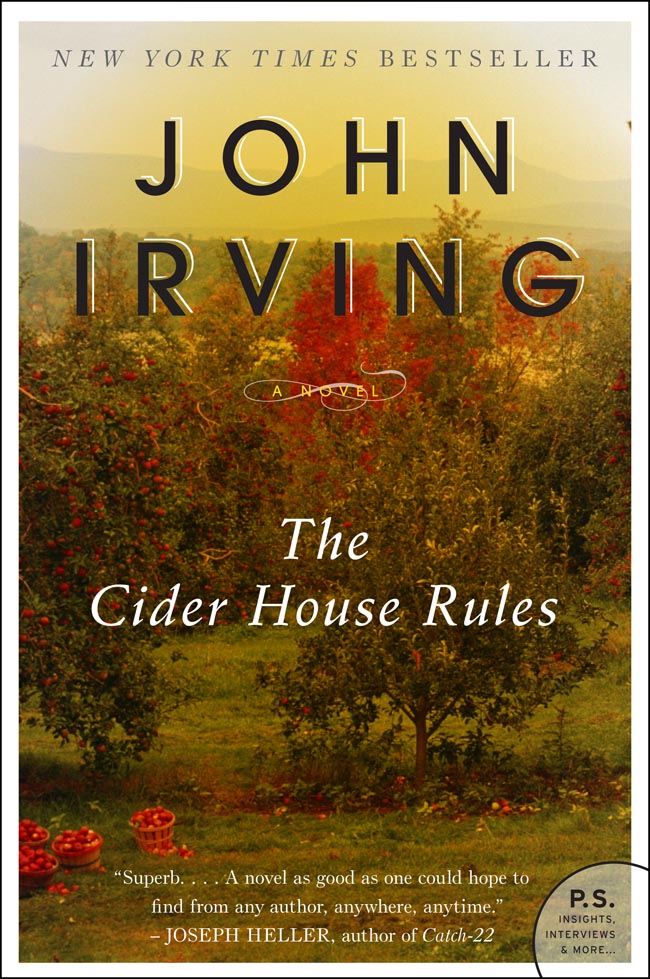 Conventionality is not morality. Self-righteousness is not religion. To attack the first is not to assail the last.

For practical purposes abortion may be defined as the interruption of gestation before the viability of the child.

1
The Boy Who Belonged to St. Cloud’s

In the hospital of the orphanage—the boys’ division at St. Cloud’s, Maine—two nurses were in charge of naming the new babies and checking that their little penises were healing from the obligatory circumcision. In those days (in 192_), all boys born at St. Cloud’s were circumcised because the orphanage physician had experienced some difficulty in treating uncircumcised soldiers, for this and for that, in World War I. The doctor, who was also the director of the boys’ division, was not a religious man; circumcision was not a rite with him—it was a strictly medical act, performed for hygienic reasons. His name was Wilbur Larch, which, except for the scent of ether that always accompanied him, reminded one of the nurses of the tough, durable wood of the coniferous tree of that name. She hated, however, the ridiculous name of Wilbur, and took offense at the silliness of combining a word like Wilbur with something as substantial as a tree.

The other nurse imagined herself to be in love with Dr. Larch, and when it was her turn to name a baby, she frequently named him John Larch, or John Wilbur (her father’s name was John), or Wilbur Walsh (her mother’s maiden name had been Walsh). Despite her love for Dr. Larch, she could not imagine Larch as anything but a last name—and when she thought of him, she did not think of trees at all. For its flexibility as a first or as a last name, she loved the name of Wilbur—and when she tired of her use of John, or was criticized by her colleague for overusing it, she could rarely come up with anything more original than a Robert Larch or a Jack Wilbur (she seemed not to know that Jack was often a nickname for John).

If he had been named by this dull, love-struck nurse, he probably would have been a Larch or a Wilbur of one kind or another; and a John, a Jack, or a Robert—to make matters even duller. Because it was the other nurse’s turn, he was named Homer Wells.

The other nurse’s father was in the business of drilling wells, which was hard, harrowing, honest, precise work—to her thinking her father was composed of these qualities, which lent the word “wells” a certain deep, down-to-earth aura. “Homer” had been the name of one of her family’s umpteen cats.

This other nurse—Nurse Angela, to almost everyone—rarely repeated the names of her babies, whereas poor Nurse Edna had named three John Wilbur Juniors, and two John Larch the Thirds. Nurse Angela knew an inexhaustible number of no-nonsense nouns, which she diligently employed as last names—Maple, Fields, Stone, Hill, Knot, Day, Waters (to list a few)—and a slightly less impressive list of first names borrowed from a family history of many dead but cherished pets (Felix, Fuzzy, Smoky, Sam, Snowy, Joe, Curly, Ed and so forth).

For most of the orphans, of course, these nurse-given names were temporary. The boys’ division had a better record than the girls’ division at placing the orphans in homes when they were babies, too young ever to know the names their good nurses had given them; most of the orphans wouldn’t even remember Nurse Angela or Nurse Edna, the first women in the world to fuss over them. Dr. Larch made it a firm policy that the orphans’ adoptive families
not
be informed of the names the nurses gave with such zeal. The feeling at St. Cloud’s was that a child, upon leaving the orphanage, should know the thrill of a fresh start—but (especially with the boys who were difficult to place and lived at St. Cloud’s the longest) it was hard for Nurse Angela and Nurse Edna, and even for Dr. Larch, not to think of their John Wilburs and John Larches (their Felix Hills, Curly Maples, Joe Knots, Smoky Waterses) as possessing their nurse-given names forever.

The reason Homer Wells kept his name was that he came back to St. Cloud’s so many times, after so many failed foster homes, that the orphanage was forced to acknowledge Homer’s intention to make St. Cloud’s his home. It was not easy for anyone to accept, but Nurse Angela and Nurse Edna—and, finally, Dr. Wilbur Larch—were forced to admit that Homer Wells
belonged to
St. Cloud’s. The determined boy was not put up for adoption anymore.

Nurse Angela, with her love of cats and orphans, once remarked of Homer Wells that the boy must
adore
the name she gave him because he fought so hard not to lose it.

St. Cloud’s, Maine—the town—had been a logging camp for most of the nineteenth century. The camp, and—gradually—the town, set up shop in the river valley, where the land was flat, which made the first roads easier to build and the heavy equipment easier to transport. The first building was a saw mill. The first settlers were French Canadians—woodsmen, lumberjacks, sawyers; then came the overland haulers and the river bargemen, then the prostitutes, then the vagrants and the thugs, and (at last) there was a church. The first logging camp had been called, simply, Clouds—because the valley was low and the clouds broke up reluctantly. A fog hung over the violent river until midmorning, and the falls, which roared for three miles upstream from the site of the first camp, produced a constant mist. When the first woodcutters went to work there, the only impediments to their rape of the forest were the black flies and the mosquitoes; these infernal insects preferred the nearly constant cover of clouds in the stagnant valleys of inland Maine to the sharp air of the mountains, or to the crisp sunlight by the bright Maine sea.

Dr. Wilbur Larch—who was not only the doctor for the orphanage and the director of the boys’ division (he had also founded the place)—was the self-appointed historian of the town. According to Dr. Larch, the logging camp called Clouds became St. Clouds only because of “the fervent backwoods Catholic instinct to put a Saint before so many things—as if to grant those things a grace they could never quite acquire naturally.” The logging camp remained St. Clouds for nearly half a century before the apostrophe was inserted—probably by someone who was unaware of the camp’s origin. But by the time it became St. Cloud’s, it was more of a mill town than a logging camp. The forest, for miles around, was cleared; instead of logs jamming the river, and the rough camp full of men lamed and crippled by falling from trees or by trees falling on them, one saw the high, orderly stacks of fresh-cut boards drying out in the hazy sun. Overall lay a silty sawdust occasionally too fine to see, but ever-present in the sneezes and wheezes of the town, in the town’s perpetually itching noses and in its rasping lungs. The town’s wounded now sported stitches instead of bruises and broken bones; they wore gashes (and found ways to flaunt their missing parts) from the mill’s many saws. The keen whine of those blades was as constant in St. Cloud’s as the fog, the mist, the humidity that overhangs inland Maine in the damp cold of its long, wet, snowed-in winters and in the fetid, stifling heat of its drizzly summers—blessed, only occasionally, by violent thunderstorms.

There was never any spring in that part of Maine, except that period of time in March and April distinguished by thawing mud. The heavy equipment of the lumbering business was immobilized; the work of the town shut down. The impassable roads kept everyone at home—and the springtime river was so swollen, and ran so fast, that no one dared to travel on it. Spring in St. Cloud’s meant trouble: drinking trouble, brawling trouble, whoring and raping trouble. Spring was the suicide season. In spring, the seeds for an orphanage were planted and overplanted.

And what of the fall? In his journal—his whatnot diary, his daily record of the business of the orphanage—Dr. Wilbur Larch wrote of the fall. Each of Dr. Larch’s entries began, “Here in St. Cloud’s . . .”—except for those entries that began, “In other parts of the world . . .” Of the fall, Dr. Larch wrote: “In other parts of the world, fall is for the harvest; one gathers the fruits of spring and summer’s labors. These fruits provide for the long slumber and the season of ungrowing that is called winter. But here in St. Cloud’s, the fall is only five minutes long.”

In his journal, Dr. Larch was demonstratively conservative with paper. He wrote in a small, cramped hand, on both sides of the pages, which were absolutely filled. Dr. Larch was not a man for leaving margins. “Here in St. Cloud’s,” he wrote, “guess who is the enemy of the Maine forests, the villainous father of the unwanted babies, the reason the river is choked with deadwood and the valley land stripped, unplanted, eroded by the river floods—guess
who
is the insatiable destroyer (first of a logger with his hands pitchy and his fingers mashed; then of a lumberman, a saw-mill slave whose hands are dry and cracked, with some fingers only a memory), and guess
why
this glutton is not satisfied with logs or with lumber . . . guess
who.
”

To Dr. Larch, the enemy was paper—specifically, the Ramses Paper Company. There were enough trees for lumber, Dr. Larch imagined, but there would never be enough trees for all the paper the Ramses Paper Company seemed to want or to need—especially if one failed to plant new trees. When the valley surrounding St. Cloud’s was cleared and the second growth (scrub pine and random, unmanaged softwoods) sprang up everywhere, like swamp weed, and when there were no more logs to send downriver, from Three Mile Falls to St. Cloud’s—because there were no more trees—that was when the Ramses Paper Company introduced Maine to the twentieth century by closing down the saw mill and the lumberyard along the river at St. Cloud’s and moving camp, downstream.

And what was left behind? The weather, the sawdust, the scarred, bruised bank of the river (where the big log drives, jamming, had gouged out a raw, new shore), and the buildings themselves: the mill with its broken windows with no screens; the whore hotel with its dance hall downstairs and the bingo-for-money room overlooking the rough river; the few private homes, log-cabin style, and the church, which was Catholic, for the French Canadians, and which looked too clean and unused to belong to St. Cloud’s, where it had never been half as popular as the whores, or the dance hall, or even bingo-for-money. (In Dr. Larch’s journal, he wrote: “In other parts of the world they play tennis or poker, but here in St. Cloud’s they play bingo-for-money.”)

The Disappearance of Grace by Vincent Zandri
Laina Turner - Presley Thurman 02 - Necklaces & Nooses by Laina Turner
Ties That Bind by Natalie R. Collins
Hadrian's Lover by Patricia-Marie Budd
The Reader by Bernhard Schlink
Seneca Rebel (The Seneca Society Book 1) by Rayya Deeb
Twisted Together (Monsters in the Dark) by Winters, Pepper
We Are Made of Stardust - Peaches Monroe #1 by Mimi Strong
Cowboy Fever by Joanne Kennedy
Lost Wolf (Curse of the Moon Book 1) by Stacy Claflin
Our partner