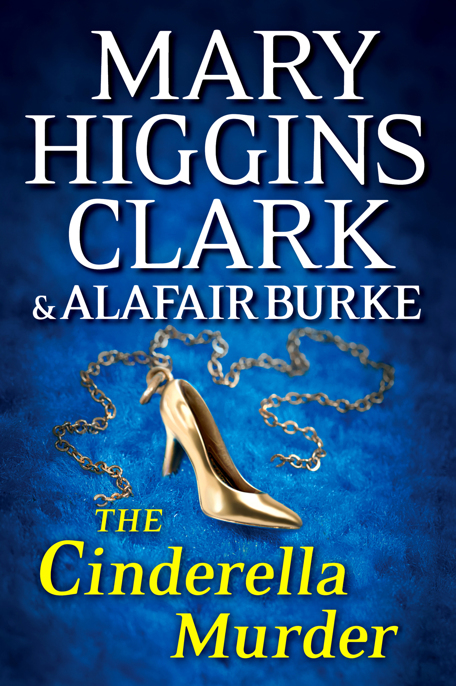 For Andrew and Taylor Clark

It is so satisfying to tell another tale, to share another journey with characters we have created and come to care deeply about—or not. And this time to have done it step by step with the wonderful writer Alafair Burke.

Marysue Rucci, editor-in-chief at Simon & Schuster, has been a marvelous friend and mentor. Alafair and I have so enjoyed working with her on this book, which is the first of a series.

The home team starts with my right hand, Nadine Petry, my daughter Patty, and my son Dave. And of course, John Conheeney, spouse extraordinaire.

Abiding thanks to Jackie Seow, art director. Her covers make me look so good.

And many thanks to my faithful readers, whose encouragement and support have made me write yet another tale.

My publisher had an idea I loved: with a cowriter, we should use the main characters in
I’ve Got You Under My Skin
in a series of novels. Working with Alafair Burke, a suspense writer I have long admired, we created
The Cinderella Murder
. In this novel and others to follow, the premise is that witnesses, friends, and family members from unsolved cases will be brought together to appear on a TV show years later in the hope of finding clues that were missed in the earlier investigations. I hope you enjoy the story.

I
t was two o’clock in the morning. Right on time, Rosemary Dempsey thought ruefully as she opened her eyes and stirred. Whenever she had a big day ahead she would inevitably wake up in the middle of the night and start worrying that something would go wrong.

It had always been like this, even when she was a child. And now, fifty-five years old, happily married for thirty-two years, with one child, beautiful and gifted nineteen-year-old Susan, Rosemary could not be anything but a constant worrier, a living Cassandra.
Something is going to go wrong.

Thanks again, Mom
,
Rosemary thought. Thanks for all the times you held your breath, so sure that the birthday upside-down cake I loved to make for Daddy would flop. The only one that did was the first one when I was eight years old. All the others were perfect. I was so proud of myself. But then, on his birthday when I was eighteen, you told me you always made a backup cake for him. In the single act of defiance that I can remember, I was so shocked and angry I tossed the one I had made in the garbage can.

You started laughing and then tried to apologize. “It’s just that you’re talented in other ways, Rosie, but let’s face it, in the kitchen you’re klutzy.”

And of course you found other ways to tell me where I was klutzy,
Rosemary thought. “Rosie, when you make the bed, be sure that the spread is even on both sides. It only takes an extra minute to do it right.” “Rosie, be careful. When you read a magazine, don’t just toss it back on the table. Line it up with the others.”

And now, even though I know I can throw a party or make a cake, I am always sure that something will go wrong, Rosemary thought.

But there was a reason today to be apprehensive. It was Jack’s sixtieth birthday, and this evening sixty of their friends would be there to celebrate it. Cocktails and a buffet supper, served on the patio by their infallible caterer. The weather forecast was perfect, sunshine and seventy degrees.

It was May 7 in Silicon Valley and that meant that the flowers were in full bloom. Their dream house, the third since they’d moved to San Mateo thirty-two years ago, was built in the style of a Tuscan villa. Every time she turned into the driveway, she fell in love with it again.

Everything will be fine, she assured herself impatiently. And as usual I’ll make the birthday chocolate upside-down cake for Jack and it will be perfect and our friends will have a good time and I will be told how I’m a marvel. “Your parties are always so perfect, Rosie . . . The supper was delicious . . . the house exquisite . . . ,” and on and on. And I will be a nervous wreck inside, she thought, an absolute nervous wreck.

Careful not to awaken him, she wriggled her slender body over in the bed until her shoulder was touching Jack’s. His even breathing told her that he was enjoying his usual untroubled sleep. And he deserved it. He worked so hard. As she often did when she was trying to overcome one of her worry attacks, Rosemary began to remind herself of all the good things in her life, starting with the day she met Jack on the campus of Marquette University. She had been an undergraduate. He had been a law student. It was the proverbial love at first sight. They had been married after she graduated from
college. Jack was fascinated by developing technology, and his conversation became filled with talk of robots, telecommunications, microprocessors, and something called internetworking. Within a year they had moved to Northern California.

I always wanted us to live our lives in Milwaukee, Rosemary thought. I still could move back in a heartbeat. Unlike most human beings, I love cold winters. But moving here certainly has worked out for us. Jack is head of the legal department of Valley Tech, one of the top research companies in the country. And Susan was born here. After more than a decade without the family we hoped and prayed for, we were holding her in our arms.

Rosemary sighed. To her dismay, Susan, their only child, was a Californian to her fingertips. She’d scoff at the idea of relocating anywhere. Rosemary tried to wrest her mind away from the troublesome thought that last year Susan had chosen to go to UCLA, a great college but a full five-hour drive away. She had been accepted closer to home at Stanford University. Instead she had rushed to enroll at UCLA, probably because her no-good boyfriend, Keith Ratner, was already a student there. Dear God, Rosemary thought, don’t let her end up eloping with him.

The last time she looked at the clock, it was three thirty, and her last impression before falling asleep was once again an overwhelming fear that today something was going to go desperately wrong.

S
he woke up at eight o’clock, an hour later than usual. Dismayed, she rushed out of bed, tossed on a robe, and hurried downstairs.

Jack was still in the kitchen, a toasted bagel in one hand, a cup of coffee in the other. He wore a sport shirt and khakis.

“Happy sixtieth birthday, love,” she greeted him. “I didn’t hear you get up.”

He smiled, swallowed the last bit of the bagel, and put down the cup. “Don’t I get a kiss for my birthday?”

“Sixty of them,” Rosemary promised as she felt his arms go around her.

Jack was almost a foot taller than Rosemary. When she wore heels, it didn’t seem so much, but when she was in her bedroom slippers, he towered over her.

He always made her smile. Jack was a handsome man. His full head of hair, now more gray than blond; his body, lean and muscular; his face, sunburned enough to emphasize the deep blue of his eyes.

Susan was much more like him in both looks and temperament. She was tall and willowy, with long blond hair, deep blue eyes, and classic features. Her brain was like his. Technically gifted, she was the best student in the lab at school and equally gifted in her drama classes.

Next to them, Rosemary always felt as though she faded into the
background. That too had been her mother’s appraisal. “Rosie, you really should have highlights in your hair. It’s such a muddy brown.”

Now, even though she did use streaks, Rosemary always thought of her hair as “muddy brown.”

Jack collected his long kiss and then released her. “Don’t kill me,” he said, “but I was hoping to sneak in eighteen holes at the club before the party.”

“I guessed that. Good for you!” Rosemary said.

“You don’t mind if I abandon you? I know there’s no chance of you joining.”

They both laughed. He knew all too well that she would be fussing around over details all day.

Rosemary reached for the coffeepot. “Join me for another cup.”

“Sure.” He glanced out the window. “I’m glad the weather is so good. I hate it when Susan drives through rainstorms to get here, but the weather prediction is good for the weekend.”

“And I don’t like that she’s going to be going back early tomorrow morning,” Rosemary said.

“I know. But she’s a good driver and young enough that the round trip won’t be a problem. Though remind me to talk to her about trading in that car of hers. It’s two years old, and already we’ve had too many visits to the garage.” Jack took a final few sips of the coffee. “Okay, I’m on my way. I should be home around four.” With a quick kiss on Rosemary’s forehead, he was out the door.

At three o’clock, beaming with self-satisfaction, Rosemary stepped back from the kitchen table. Jack’s birthday cake was perfect, not a crumb astray when she flipped it over and lifted the pan. The chocolate icing, her own recipe, was relatively smooth, with the words
HAPPY 60TH BIRTHDAY, JACK
,
written carefully, word for word.

Everything is ready, she thought. Now, why can’t I relax?