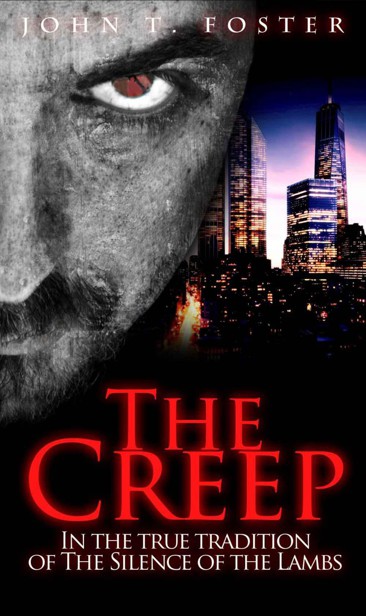 By day a nobody, by night,
K
ing of the
S
erial
K
illers

No part of this book may be reproduced, stored in a retrieval system, or transmitted, in any form or by any means, without the prior permission in writing of the publisher, nor be otherwise circulated in any form of binding or cover other than that which it is published and without a similar condition including this condition being imposed on the subsequent purchaser.

Set in 1990,
THE CREEP is definitely not for the faint hearted. It is a spell-binding
thriller about a ruthless and cold blooded killer.

A psychological thriller in the true tradition of
The Silence of the Lambs,
THE CREEP takes you deep into the mind of a killer who has roamed America unchecked for the past seven years. He comes to Bill Harvey, the
world's
richest and most celebrated hypnotherapist for help, and under hypnosis
-
the details of his gory past are
laid bare.

But 'Dr. Bill' gets a lot more than he bargained for - and so does the reader - as the plot twists and turns towards an extraordinary climax. Before you read this book you will want to deadbolt your doors and secure your windows,
because as the book makes clear
, Bishman is not the only serial killer out there
.

WARNING: This book contains a great deal of information on events actually happening in the real world today. Many readers may therefore be disturbed by its content. But once you have picked it up, you will not want to put it down.

This book is dedicated to Anita, the only girl I ever really loved.

P
REVIEW OF THE NEXT BOOK IN T
H
E SE
R
IES:

THE DISCIPLE OF MAMMON

Each year, over 24,000 people in America are murdered. But that figure never accounts for serial killers like Bishman.

Many serial killers victims are never found and are often just listed as missing persons.

Bishman is the man nobody would notice, but everyone should fear. He doesn't need a reason to kill. Perhaps that's why, when Bishman walks into the consulting room of the world's leading hypnotherapist, Bill Harvey - and the reader - can't help but want to know more.

In the true tradition of
The Silence of the Lambs
,
what unfolds is a full blooded account of a cold blooded killer, driven by the insatiable need to take everything life has to offer - and then take life itself.

But if you're expecting a
cozy
ending with justice prevailing, forget it.
Life - and death - are
never quite that simple.

WARNING: The Creep contains scenes of explicit sex and violence that some readers may find too strong.

BOOK ONE
CHAPTER
ONE

It was late evening. The sun had gone down, but it was still plenty warm. Bishman found himself walking along the embankment of the Charles River. He was humming a variety of tunes, as was his way. This particular evening, he was going through some Beach Boys' and Beatles' hits.
Over and over again.

A solitary jogger padded past. All the others had quit hours before. Like the sailboats moored on the other side of the river at the Yacht Club, they had all quit. A few bats dived and swerved in the heavy evening air, snatching up insects with unerring precision.

Bishman found a bench fifty yards up from the Harvard Bridge and sat down. A guy was already sitting there. He was probably taking in the solitude but that didn't concern Bishman, who took out a cigarette and offered the guy one.

"Yeah, sure," replied the stranger.

"It's good here," said Bishman, "I'm just passing through on my way to Detroit,"
nodding toward the other side of the river, he continued; "I never knew Harvard over there was one big campus. You from round here?" Bishman lit his cigarette. The stranger had already lit his.

"Yeah. I go to MIT.
I'm studying metallurgy, of all things."

"Not really, it's the study of metals. We have to know all the metals - what elements make them up, strengths, weaknesses - all that sort of thing. It's more complicated than you think.
There's
some amazing metals out there these days. Incredible uses as well."

The stranger deliberately crushed the cigarette with his foot before it was finished.

"I was sitting here yesterday," began Bishman, "and a guy told me all about the markings on the bridge. A lot of people probably wonder what they are." Bishman took a deep breath of fresh air and continued smoking.

"Yeah, I've seen them. I've often wondered. There's one in the middle that reads
Halfway to Hell
," said the student, giving Bishman a quizzical look.

"Apparently one of the guys from a fraternity rolled all the way across the bridge to measure it. Each roll was a 'Smoot' - his name was Smoot, obviously. His friends marked it out, 40-Smoots, 50-Smoots and so on. The halfway point they called
Halfway to Hell
. At the end it's marked
364.4 Smoots and one ear
. The one I like best is 69-Smoots - that's called
Heaven
!"

The two of them roared with laughter. It wasn't that funny, but lau
ghing was their way of saying, '
I
like talking to you. Let's talk some more
.'

"D' you smoke? I mean as in
smoke
?" Bishman tapped his trouser pocket, as if to signal he had something there - a joint maybe.

Bishman took out
a crumpled joint and lit it. H
e took a long toke and passed it onto the guy, who took one himself.

"Let's walk," said Bishman, "I'd hate someone to come up behind us and tell us we're doing something illegal!" Bishman laughed and eased away. Without hesitation, the student followed.

The Charles River was like glass. The only ripples were caused by eight or nine ducks
who
were just treading water. A green bottle was lazily bobbing up and down. In the half light, a continuous stream of car lights flowed over the nearby bridge, their engines combining to create a constant monotonic drone.

They walked maybe two or three hundred yards from the bridge and sat on the embankment. Apart from the two of them, it was deserted. They smoked the joint and talked quietly.

Bishman calmly walked to the water's edge and picked up a large solid granite boulder. The guy appeared to know what was going to happen next but he didn't move. Bishman walked towards him and brought the boulder crashing down on his head. He was killed instantly. The
b
oulder crushed
the skull, releasing a mass of b
lood, grayish fluid, splintered bone and cartilage.

It was like a gazelle being run to ground by a lioness on the Serengeti Plains of Tanzania, submitting when it knew its time for death had come.

He's stone dead,
thought Bishman as he carefully rolled the rock out into the water, scarcely
m
aking a splash. He dragged the body to the water's edge and left it there. Blood seeped into the River turning the surrounding water brown in the lowly ebbing light. Bishman picked up a pebble and skimmed it across the water. It bounced th
ree times. He missed the
bottle,
it was just too far away.

The victim was Charlie Stranberg, a twenty-three year old student from Boise, Idaho.