Read The Cubicle Next Door Online

The Cubicle Next Door 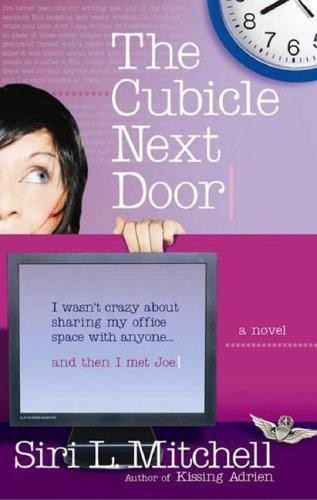 The Cubicle Next Door

To Tony
Without you, this book could not have been written.
Even more than the wind beneath my wings,
you are the rhythm of my heart.

Thanks to Carolyn McCready and Terry Glaspey, for being excited about this story. To Beth Jusino, for reminding me to write from the heart. To Kim Moore, for pointing out the places where I needed to give just a little more. To Tony Mitchell and Lanna Dickinson, my first readers; the depth in this book is due to both of you. To my father-in-law, Lynn Mitchell, for driving me around Colorado Springs and Manitou Springs and freely contributing his observations to this work. To Tim Scully, the A-Basin expert. To Marsha Scully, Tim Hayden, and Dorri Karolick, for educating me on the finer points of the interworkings of the Academy. To Dr. Dale Agner, for advising me on flight medicine. To Mike Hutson, who deepened my understanding of John 3:16. To the Bandas, who introduced me to Bollywood. And to those men and women of USAFA Class of ’91, who embody their class motto:
Munus Primo, Semper Integritas.

And to my sister, Heidi Hand, who grappled with difficult questions and made tough decisions with great courage. I’m proud of you.

S
o what do you think, Jackie?”

What do I think? Funny Joe should ask me. He’s just finished reading my blog. He’s just quoted me to myself. Or is it myself to me? Do I sound surreal, as if I’m living in parallel universes?

The blog—my blog—is all about Joe. And other topics that make me want to scream. But the clever thing is, I’m anonymous. When I’m blogging.

And that’s the problem.

My brain is starting to short-circuit.

If I were clever I’d say something like “Look!” and point behind him and then duck out of the room when he turned around.

But there’s so much computer equipment stacked by my desk and so many cables snaking around the floor that I’d probably break my neck if I tried to run away. So that option is out.

I could try pretending I didn’t hear him. “What?”

“SUVs. What do you think about them?”

But then we’d basically end up where we started.

So how did I get myself into this mess?

It was all Joe’s fault.

The year Joe came into my life, I’d been working the same job for ten years, doing the same things I’d always been doing when the department hired one too many people. Had I been working for a private company, it might not have been such a big deal, but I was working at the U.S. Air Force Academy as a civilian in a building classified as a National Historic Landmark. So it’s not as though we could carve an extra office out of a closet or bump out a wall somewhere. At least not without 51 requests in triplicate, 32 meetings with the architect’s office, and a project deadline scheduled for 17 years after the date of my death.

May God rest my miserable soul.

We could, however, order extra cubicle panels and subdivide an existing office as long as the panels didn’t cost more than a specified number of dollars.

So that’s what happened.

I was the one who ordered them.

Unfortunately, no one bothered to tell me it was my office that was going to be subdivided.

Maybe I should have suspected. I mean, how long can a civilian GS-07 keep an average-sized dimly lit interior office to herself? It was only a matter of time, right?

I ordered the tallest panels I could find. And after they came, I called the casual status lieutenants to install them. They were freshly graduated Air Force Academy cadets who were hanging around the department until their real jobs came open. And when they came into my office, they asked the question that would change my life.

“Where are they going?”

“Where are what going?”

They stood there in front of my desk, all three of them in camouflage battle dress uniforms, arms crossed in front of them, ready to take on the world. “So…what do you want us to do?”

“Go find out who they’re for.” Duh. Double-duh.

They just stood there.

That made them happy. Estelle was the department secretary. She knew everything—except how to use a computer.

That’s what they’d hired me for.

They sauntered off down the hall, but they came right back two minutes later. “They’re for you.”

Estelle was usually right, but this might fall under the Scanning Software category of things in which she was completely mistaken.

The previous year, the colonel had asked me to install scanning software on her computer for the new scanner, and in between the time it took me to store the software disks in my cabinet and come back to show her how to use the program, she’d dropped a textbook on top of her keyboard, pressing all of the F-key functions at the same time.

Never, ever do that.

I snatched the book from her computer and contemplated hitting her on the head with it, but I dropped it onto her desk with a bang instead. “What are you doing?”

“Scanning. The colonel wanted me to scan the chart on page 137.”

“You don’t scan that way.” It really killed me not to be able to kill her.

“But you just installed the software, so I held it up to the screen for it to see.”

“The screen doesn’t scan it; the scanner scans it.”

So you see, the Scanning Software category was a gigantic catchall for tasks, both large and small, that Estelle just didn’t and never would know how to do.

After we replaced her keyboard and reinstalled all of her software, the colonel made me the official scanner person for the department. Which gave me one more title to add to official digital camera person, official video camera person, official department website person, official overhead-slide-projector person, and kick-the-copier-in-just-the-right-spot-to-make-it-work person. That’s why I needed all of my office space. It wasn’t just me in there. It was the scanner, the cameras, the slide projectors, and assorted small appliances that didn’t work anymore but might be useful if there were a nuclear explosion and technology devolved back to the Bronze Age.

I marched out of my office and down the hall. The lieutenants trailed me to the front office in perfect flight formation.

“Mmm?” She was rubbing lotion into her hands.

“Those cubicle panels are not for me.”

“Of course they are. That’s what the colonel said.”

“The one where he said we’d be getting one too many instructors, so we’d have to find a place to put him.”

“And so he said to make room for him. And I e-mailed back that I thought your office would be perfect.”

It was. It was perfect for me.

“And someone was going to tell me about this when?”

“That’s funny. Because I thought…” She began dragging her mouse around the screen, clicking at various folders in her Outlook program.

“See. Right there. It was in April.
Good idea. Lt. Col. Gallagher will share Jackie’s office
.” She read further, mumbling words, running her finger across the computer screen and leaving behind a greasy streak. “Oh. Huh. I guess I was supposed to tell you. Sorry.” She looked up from the computer and raised her eyebrows. Smiled.

“Is the colonel busy?”

“Let me see.” She took a scheduling calendar from a stand on her desk and found the day’s date. Consulted her watch. “Not right now.”

I told the lieutenants I’d get in touch with them later, and then I stepped around Estelle’s desk, walked about three steps, and knocked on the colonel’s door. I peeked my head around the corner. “Sir?”

“Jackie? What can I do for you?” He stood up as I approached and fiddled with a pencil on his desk.

“I want my office back.”

“The one you decided to subdivide in April? Because you hired one too many instructors?”

“Oh, yeah. Well, not really. Greg got the dean’s extension, so he stays for another two years. If he’d gone, we’d have been right on target with the number of instructors. You know how it is.”

“No, I don’t. Your office is bigger than mine is. Why don’t you subdivide yours?”

His eyebrows shot up into his hairline. People don’t usually talk to colonels like that. But see, they couldn’t fire me because nobody else knew how to kick the copier. And I was a civilian. And I was a woman. “We chose yours because it’s the only office that will work. We don’t have to reconfigure any overhead lights, there were enough outlets, enough telephone jacks. Space is at a premium in this building. You know that.” He shrugged and sat down.

The interview was over.

T
he talk with the colonel may have been over from his perspective, but it wasn’t from mine.

It was, however, time for a cease-fire.

I walked outside and stalked around Fairchild Hall a couple of times. No mean feat. It’s the single largest academic building in America, and its low, linear, 1950s architecture broadcast the Academy’s no-nonsense approach to life.

This summer, like most summers, the brilliant blue skies had been tempered by the smoke of forest fires. But the sunlight still blazed down, unfiltered by the native trees.

Here at the outskirts of the city, cottonwood trees congregated around streams or dips in the landscape, offering shade to things that didn’t need it. Pines marked the runoff patterns of the hills, ever alert for the next cloudburst.

Absence of Grace by Warner, Ann
Rage Of The Assassin by Russell Blake
A Girl's Guide to Moving On by Debbie Macomber
Neverwylde (The Rim of the World Book 3) by Linda Mooney
Too Easy by Bruce Deitrick Price
Brotherhood of the Wolf by David Farland
A Misty Harbor Wedding by Marcia Evanick
Breath of Angel by Karyn Henley
Alien Tongues by M.L. Janes
Any Price by Faulkner, Gail
Our partner