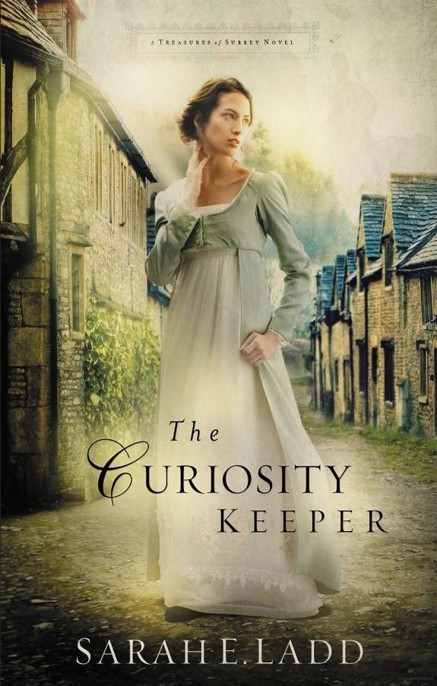 “My kind of book! The premise grabbed my attention from the first lines and I eagerly returned to its pages. I think my readers will enjoy
The Heiress of Winterwood
.”

—
RT Book Reviews
, 4 STARS, ON
A Lady at Willowgrove Hall

“[E]ngaging scenes of the times keep the pages turning as this historical romance . . . swirls energetically through angst and disclosure.”

—
Publishers Weekly
ON
The Headmistress of Rosemere

“This book has it all: shining prose, heart-wrenching emotion, vivid and engaging characters, a well-paced plot and a sigh-worthy happy ending that might cause some readers to reach for the tissue box. In only her second novel, Ladd has established herself as Regency writing royalty.”

“If you are a fan of Jane Austen and
Jane Eyre
, you will love Sarah E. Ladd’s debut.”

—USAT
ODAY.COM ON
The Heiress of Winterwood

“This debut novel hits all the right notes with a skillful and delicate touch, breathing fresh new life into standard romance tropes.”

—
RT Book Reviews
, 4 STARS, ON
The Heiress of Winterwood

“Ladd’s charming Regency debut is enhanced with rich detail and well-defined characters. It should be enjoyed by fans of Gilbert Morris.”

—
Library Journal
ON
The Heiress of Winterwood

—
CBA Retailers + Resources
ON
The Heiress of Winterwood

T
HE
W
HISPERS ON THE
M
OORS

The Heiress of Winterwood

The Headmistress of Rosemere

A Lady at Willowgrove Hall

Thomas Nelson, Inc., titles may be purchased in bulk for educational, business, fund-raising, or sales promotional use. For information, please email [email protected]

Scripture quotation used as inscription on brooch (Romans 8:28) is from the King James Version of the Bible.

Summary: "Born into two different classes, James and Camille shouldn't even know each other. But when the pursuit of a missing ruby brings them together, much more than a mere acquaintance is ignited. The daughter of a curiosity shop owner, Camille would never be considered a lady. Nor does she want to be. With a fiery personality, she dreams of adventures far beyond the walls of her family's modest business. But when her father thrusts a mysterious box into her hands and disappears, her whole world -- dreams and all -- shifts. James is an apothecary, tending to the health needs of the town of Bentworth. His father, a well-known explorer and collector, is quite wealthy from the spoils of his adventures until one risky gamble and a stolen gem leave him on the edge of ruin. Seeking his father's approval, James picks up the hunt for the stolen ruby, leading him to the door of Camille's curiosity shop. With both of their lives in danger as the ruby remains at large, James squires Camille away to the Bentworth School, believing that would be the last place her pursuers would look for her. They both find their hearts and dreams heading in a new direction, but before they are free to embrace their future they must solve the mystery looming around them. The more they uncover, however, the harder it becomes to know whom to trust. And they begin to realize that recovering the ruby may require a great sacrifice: their newfound love and maybe even their lives. "-- Provided by publisher.

I lovingly dedicate this novel
to my sister, Sally—
my first and best friend.

She would not be bullied or manipulated. Not in her own shop.

Camille recognized the expression in the man’s eye. He did not want to speak with her, a mere woman. Not when the owner of the shop was James Iverness.

But James Iverness—her father—was not present.

She jutted her chin out in a show of confidence, refusing to even blink as he pinned her with a steely stare.

“As I already told you, Mr. Turner, I have no money to give you,” she repeated, louder this time. “Any dealings you made with my father you will need to take up with him. I’ve no knowledge of the transaction you described. You had best return at another time.”

“I’ve seen you here, day in, day out.” His voice rose in both volume and gruffness. “How do you expect me to believe you know nothing about it?” The wooden planks beneath his feet groaned as he shifted his considerable weight, making little attempt to
mask his effort to look around her into the store’s back room. “Is he in there? So help me, if he is and—”

“Sir, no one besides myself is present, with the exception of my father’s dog.”

It was in moments like this that she wished she were taller, for even as she stood on the platform behind the counter, the top of her head barely reached his shoulder. “If you would like, I will wake the animal, but if you have seen me here often, as you claim, then no doubt you have also seen Tevy and know he does not take kindly to strangers. You decide. Shall I go fetch him?”

Mr. Turner’s gaze snapped back to her. No doubt he knew of the dog. Everyone on Blinkett Street knew about James Iverness’s dog.

A warm sense of satisfaction spread through her, for finally she had said something to sway the determined man.

Mr. Turner’s face deepened to crimson, and he pointed a thick finger in Camille’s direction, his voice matching the intensity of his eyes. “Tell your father I’ve a mind to speak with him. And tell him I want my money and won’t take kindly to his antics. Next time I am here I will not be so willing to leave.”

He muttered beneath his breath and stomped from the store, slamming the door behind him with such force that the glass canisters on the near shelf trembled.

A shudder rushed through her as she watched him lumber away, and she did not let her posture relax until the back flap of his gray coat passed the window and was out of sight. How she despised such interactions. As of late, Papa seemed to be angering more patrons than he obliged, and he always managed to be conveniently absent when they came to confront him.

She needed to speak with Papa, and soon. Awkward conversations like the one with Mr. Turner needed to stop.

Camille tucked a long, wayward lock of hair behind her ear and drew a deep breath. Once again her father’s dog had come to her rescue, and he was not even in the room.

“Come, Tevy,” she called. In a matter of moments the massive brown animal was through the door and at her side, tail wagging enthusiastically.

“Pay heed!” she laughed as he nudged her hand, forcing her to pet him. “That tail of yours is likely to knock every vase off that shelf if you’re not careful, and then Papa will blame—”

The door to the shop pushed open, jingling the bell hung just above it. She drew a sharp breath, preparing to deal with yet another customer, but it was her father who appeared in the doorway.

He was a short man, not much taller than she herself, but that was where their physical similarities ended. His green eyes made up in intensity what he lacked in stature. His hair, which in her youth had been the color of sand, was now the color of stone, and years spent on a ship’s deck had left his complexion ruddy. His threadbare frock coat, dingy neckcloth, and whiskered cheeks made him appear more like a vagabond than a shopkeeper, and despite his privileged upbringing, he often acted and spoke like an inhabitant of the docks where he did much of his trading.