Read The Curse of Jacob Tracy: A Novel Online

The Curse of Jacob Tracy: A Novel 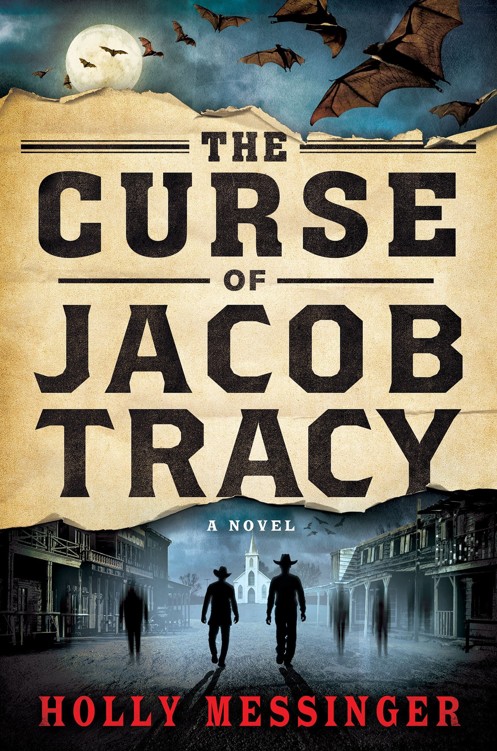 For Tony, without whom this story would have had a very different ending

A SHORT TRIP TO SIKESTON

Miss Fairweather’s Chinese butler showed Trace to the library, which was dark and cavernous, surprisingly masculine. Stuffed animals and birds loomed from the gallery, backlit by the skylights and the rose window at the head of the room. A fire helped dispel the early-March gloom, but Trace was careful not to look into any dark corners. These big old houses tended to hold nasty surprises for him.

“Miss Fairweather will be with you soon,” the Chinese said, bowing.

“Thanks.” Trace worried the brim of his hat in his hands and hoped he wasn’t wasting his time. Usually by this time of year, he liked to have himself and Boz hired on with a supply train or party of settlers headed west, but the railroads stretched out further every year, and there just wasn’t that much wagon traffic headed out of St. Louis anymore. He and Boz had been scratching for work all winter, and this spring looked to be more of the same.

John Jameson at the Seed and Livery hadn’t been able to tell Trace much about Miss Fairweather or what she wanted done. “All I know is she’s English and she’s got money to burn. She bought that old Mannerson place, the one built by the railroad man before he went bust? Renovated the whole thing, but never has anybody in. Doesn’t go out in Society, but I hear she’s got some doings with the medical college. Trying to make them take female students, if you can beat that.”

A glance around the library told Trace something else about her: she was a scholar. The books had a used look about them—cracks in the binding and papers stuffed between the pages. He stepped closer to the nearest shelf, squinting to read the titles, which were wide-ranging and impressive: history, theology, philosophy, medicine. A whole shelf on Spiritualism.

Trace’s mouth curled in distaste. He’d met more than a few tricksters who made their living staging séances, preying like vultures on the emotions of the bereaved. Trace figured if a real dead person ever showed up to one of those productions, the so-called medium would just piss himself, and after that he wouldn’t be so welcome in the fancy parlors.

Light footsteps sounded in the hall, accompanied by the rustling of silk, and Trace turned to see a porcelain doll of a woman enter the library.

She was young, was his first thought. He’d been expecting a withered spinster in black crepe, but this woman was maybe thirty, and seemed younger because of her small stature. She was thin to the point of frailty, with fair hair scraped back from an intelligent, sharp-featured face. Her silk morning gown was steel blue, her eyes as pale and chilly as a November sky.

“Mr. Tracy?” She crossed the Persian carpet and extended a hand to him—palm sideways, like a man. “I am Sabine Fairweather. Thank you for coming on such short notice.”

Trace clasped her hand gingerly, conscious of his rough boots, his oilcloth coat over his one good shirt, and the fresh razor scrapes on his jaw. He was used to looking down at people, being well over six feet himself, but she was a dainty little thing—the top of her head barely reached his shoulder. “Pleasure, ma’am.”

“Please, be seated.” She indicated the big leather club chairs on either side of the fireplace, and crossed to the liquor cabinet. “Would you care for a Scotch?”

“That’d be fine, ma’am,” he said, mildly surprised at being offered liquor by a lady at eleven in the morning.

She poured each of them a half inch and handed a glass to Trace before perching on the chair opposite him. “Mr. Jameson tells me you were at seminary before the war?”

“Yes, ma’am, that’s right.” The whiskey was wonderful, smooth and spicy, and against his better judgment he imagined what a pleasure it would be, to spend an evening in this library with a glass and a book.

“That must make you unusually educated, among your fellows,” she said. “I suppose you read Latin?”

“It’s been awhile, but yes ma’am, I do. Latin and French, a little Greek, a little Hebrew.”

“How many trips to the west coast have you made?”

“Only got out to the coast a couple of times—once to Portland and once to Tacoma. Most of the trips I make are shorter—Montana, Santa Fe.”

“Guide, trail boss, security.” His smile twisted. “Most of the folks goin by wagon these days are headed off the beaten path. They’re payin for protection more than my knowledge of Latin.”

“Indians. Outlaws. Their own foolishness.”

That was perhaps not a tactful thing to say, but Miss Fairweather seemed amused. “And do you find it rewarding, championing fools?”

Trace shot her a wry glance. “Well, it doesn’t pay as well as you’d think.”

She acknowledged that with a smile, which lent a fey quality to her sharp features. “Mr. Jameson mentioned you had a young sister at St. Mary’s. Is she your only family?”

If a man had asked him that question, Trace would have asked why he wanted to know. But he supposed a woman in her position—alone, interviewing men like himself—found it reassuring to know she was hiring a family man. “Pretty near. Got a brother in the army, but he’s looked out for himself, since our folks died.” Warrick was a captain at Fort Leavenworth, last Trace had heard. They hadn’t spoken in eight years.

“Well, Mr. Tracy.” Miss Fairweather turned to set her glass on the end table. “I’m sure you would like to know why Mr. Jameson referred you to me.”

“Indeed. I told him I needed a trustworthy man to fetch some property for me. It amounts to a glorified errand, but I need someone reasonably intelligent, capable of discretion.”

“Pleased to be at your service, ma’am.” His curiosity had turned cautious; he hoped she didn’t mean to involve him in some sort of swindle.

“I received a letter, from the solicitor of a dear friend of mine who passed away last year. In her will she made reference to a keepsake she wished me to have, but unfortunately my health prevents me from traveling to retrieve it.”

“How far is it?” He didn’t want to get too far away from St. Louis; he still hoped to get on with a wagon party for the year.

“Sikeston, Missouri. Not far by your standards, perhaps. I’ll pay you two hundred dollars, half in advance and half upon completion.”

Trace nearly choked on the Scotch. Two hundred dollars was five or six months’ pay for the average cowhand. His half would pay Emma’s board and tuition for another term, square him with the livery, and give both of them a little pocket money. “I’m agreeable, ma’am, so long as you give me the particulars of what I’m bringin back, so I can rent a wagon if need be.”

“Oh, no, nothing like that. It’s a box. A trinket box, such as we ladies keep things in. I believe I left the letter on my desk, here…” She rustled away across the long carpet, toward the monumental desk under the rose window. She returned with a folded packet in her hand. “The particulars, as you say, are in there. Would you care for a cigar?”

“Ah, no, ma’am, thank you.” That was an odd question, in his opinion; he hoped he didn’t seem so uncouth that he’d smoke in the presence of a lady. He took the heavy, smooth papers from her hand and folded them open to reveal a fine copperplate script:
To whom it may concern … be it herewith known by these … bequeath to Miss Sabine Fairweather …

“Oh, please don’t demur on my account.” She walked to the cabinet again and picked up a wooden casket, inlaid with ivory. “I have always enjoyed the aroma of a good cigar. And these are very fine, I understand. My father’s colleagues always appreciated them.”

Now he couldn’t refuse without offending her. Trace glanced into the velvet-lined box and the sharp smell of tobacco teased his nostrils. They
were
good cigars. He took one, allowed her to trim the end of it, and let his attention fall back to the paper as she turned to the fireplace for a light.

She was coming back with a small iron salamander in her hand, the tip of it glowing hot. He raised the cigar, smiling politely; she was smiling politely, but there was something in her gaze, curiosity perhaps, and she opened her mouth to ask a question at the same time as the iron dipped in her hand—

Pain seared the inside of his wrist. He jerked and dropped the cigar, just managed not to swear out loud. Miss Fairweather started back with a cry of dismay as the smell of burnt flesh rose between them.

“Oh my goodness, how
could
I have been so clumsy! Mr. Tracy, I do so apologize!”

She set the salamander quickly on the hearth and spun back to grasp his palm in her own, pushing back his sleeve to examine the burn. It was a small, sizzling half circle below the butt of his thumb, angry red and stinging like a bastard.

“I am so very sorry. Please, let me call for Min Chan to treat that.” She crossed to the doorway and pulled the bell cord.

“It’s nothin, ma’am,” Trace said, annoyed but trying to be gracious in the interest of employment. “I’ve had worse brandin calves.”

She hurried away. Trace got up and paced, shaking his hand and folding back his coat sleeve so the oilcloth wouldn’t rub it, amazed at the carelessness of the woman. He’d had the impression she wasn’t half stupid, but now he wasn’t so sure.

He sensed a presence enter the room and spun around, expecting Miss Fairweather or the Chinese, but the new visitor was a pretty colored girl in a white apron and cap. She dropped a curtsy. “Can I get you anything, sir?”

“No, I don’t need anything,” Trace said irritably, and then stopped cold, his throat thickening with revulsion.

The girl was semi-transparent. Trace could see the brass gleam of the doorknob through her chest. She smiled at him, but her features were vague and blurred, as if he were seeing her through a warped pane of glass. She clearly had no idea she was dead.

Bumped by Megan McCafferty
War of the Eagles by Eric Walters
Sworn to Secrecy (Special Ops) by Montgomery, Capri
Scandalous by Candace Camp
Raging Sea by Michael Buckley
Beast of Burden by Marie Harte
The Girl's Guide to Homelessness by Brianna Karp
The Butler's Daughter by Joyce Sullivan
Bound by Light by Anna Windsor
The Mirror And The Maelstrom (Book 4) by Daniel McHugh
Our partner