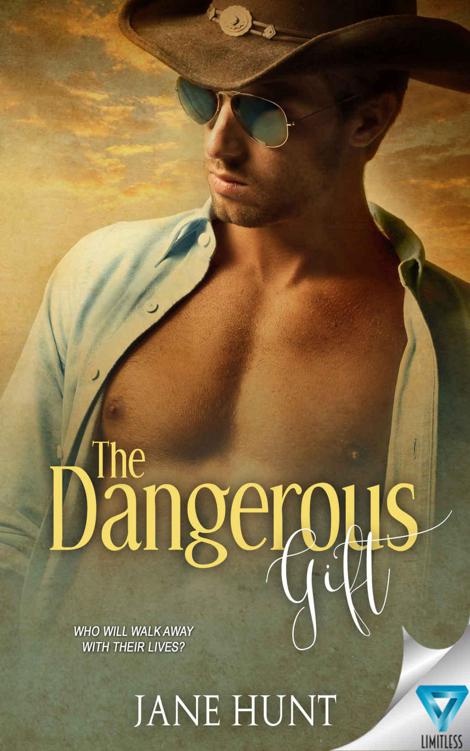 This story, like everything I do, is for my lovely family. I’m so glad that I have you.

Jennie Taylor put the finishing touches on the brightly colored decorations on the porch. This birthday was particularly poignant. Never mind that it was her eighteenth, it was also the first since her parents’ tragic accident. “Annie, is that okay?”

“Oh my God, I’m so excited about tomorrow.” Jennie jumped down from the steps.

“Jared, I need you and Jennie to pick up her birthday cake from the baker’s in town,” Annie shouted to her son as he secured the large white marquee they’d erected at the side of the ranch house.

“Sure thing, Momma. I don’t need Jen. I’m sure I can manage.” Jared joined them on the porch and gave his mother an affectionate squeeze.

“You need Jennie with you, son. She knows what we ordered. I can’t expect you to notice if the decorations are the right ones.” Annie’s smile softened the impact of her words.

Jared raised his hands in surrender. “Okay, we’ll both go.” Jennie looked away before he saw the blush heating her face. “Can you be ready in fifteen minutes, Kitten?”

Jennie smiled. She wished Jared saw her as a sexy cat rather than the cuddly kitten his use of her pet name suggested. She gathered up the leftover decorations and nodded. “I’ll just get my bag.”

Jennie and Jared picked up the last of the supplies Annie asked for, including the elegant cake, which was a masterpiece of pink frosting and silver stars.

“It’s such a hot, sultry afternoon, Jared. Can we stop for a swim in The Old Creek before we head back?” Jennie risked a wary glance at Jared, not sure if he would agree. Their much-treasured, easygoing relationship wasn’t the same anymore. Lately, Jared behaved differently towards her; he was distant and seemed unwilling to spend time alone with her. So she couldn’t miss this heaven-sent opportunity now they were alone.

“It’s tempting, but what about the cake? Momma would never forgive us if it melted into oblivion.” Jared’s gaze danced with amusement.

Still, Jennie sensed he was going to give in. “True, but a quick swim won’t make much difference, and your truck is air-conditioned.” If he didn’t agree, her scheming would be pointless. Tomorrow would be her eighteenth birthday, but the only present she desired sat next to her. At twenty-three, Jared epitomized everything she desired in a man. He dominated her dreams both sleeping and waking. They would be so good together if only he saw her as a woman rather than a surrogate kid sister. Today, she would make sure of that.

“Ten minutes, no more, or Momma will have my ass.” Jared pulled into the clearing at the side of the creek. His cell phone rang, and he motioned Jennie out of the truck and signaled he would follow her.

Jennie opened the door and jogged down to the creek. She slipped out of her jeans and top and, after a moment’s hesitation, added her lacy bra and panties to the heap on the flat rock at the side of the creek. The truck door clicked shut. She ran to the water’s edge and jumped in, her reaction precipitated partly by modesty but mainly to ensure Jared’s closeness when she revealed her nakedness. Parts of the creek were deep and dangerous, but here, the water was relatively shallow and perfectly safe. She swam up and down the shoreline, enjoying the caress of the cool water on her naked body.

Jared appeared from the trees that separated the water from the parking area. He stood at the side of the creek and removed his boots and socks. He looked across at Jennie before turning away. He stepped out of his jeans, pulled his shirt over his head, and walked to the water’s edge; his abs were ripped and his legs long and muscular, sculptured by the long hours of ranch work.

Jennie ducked under the water, flustered. She enjoyed the silence and weightless feel of the water until her courage returned. She surfaced and looked for Jared in the creek, but he wasn’t there. She swam to the edge and saw his clothes were gone. The slam of the truck’s heavy door and the roar of the engine coincided with the knots building in her stomach. Something was wrong, and if she didn’t hurry, he would leave without her.

Jennie reached the truck in record time, dressed only in her jeans and shirt. There wasn’t time to put her underwear on. As soon as she slipped in beside him, Jared gunned the engine. She grabbed for her seat belt as her body swayed precariously in the speeding truck. Her damp clothes clung to her wet skin, and the unpleasant, clammy feeling added to her misery. Jared ignored her as he drove, and the truck’s atmosphere became glacial. Mortified, Jennie stared straight ahead, her plans in tatters.

When the ranch buildings appeared in the distance, Jared broke his silence. “What exactly are you playing at, Jen?”

“Nothing. I was swimming, that’s all.” Jennie hated her childish, sulky tone.

Jared glared at her dripping body. “Well, that worked well.”

“Don’t…” Jennie’s tears welled, and she impatiently dashed them away. “I wanted to show you I’m not a kid anymore. Prove we can be together now.”

Jared slammed on the brakes. The truck skidded in the dust and came to a halt, sideways across the road. He flung open the driver’s door and stalked round to the passenger side. Shocked at the abrupt stop, Jennie tracked his progress towards her. The image of Jared yanking her out of the truck into his arms flashed into her mind. Instead, Jared opened her door and leaned against the doorframe, his face stern and his blue-eyed gaze arctic.

Jennie gulped. “What did you do that for?”

“I didn’t want to crash the truck and put you in the hospital for your birthday.” Jared messed up his hair with his fingers as he continued, “Why would I see you as a potential lover?”

The incredulity in his voice hurt her more than his words, and she couldn’t hold back the tears. “I’m sorry...”

“Okay, we’ll say no more about it. I don’t want to spoil your birthday.” Jared smiled.

“You won’t tell anyone?” Jennie hated her gaucheness.

“Of course not.” Jared frowned. “We need to be clear, though. We are not going to be lovers, and the sooner you accept that, the sooner we can move on. Get back to normal.”

Jennie didn’t argue, desperate to escape from her humiliation. “We better not hang out together.”

Jared looked surprised, shocked even, but his words were blunt. “Fine by me. Okay, let’s get you home. I don’t want Mom worried.”

Just like that, he crushed her dreams and ruined her birthday.

Jennie’s party passed in a blur. She smiled when expected, danced with everyone who asked, but couldn’t wait to escape to her room when it finally finished late into the night. As she sat on the edge of her bed, a stack of brown envelopes on her desk caught her eye. She retrieved them and scattered them before her on the mattress. As she reread each of the acceptance offers from the English universities, she made her decision, her mind resigned to what she must do. She would study business and media at an English university. It was the only way to escape from her feelings for Jared, which he clearly didn’t reciprocate. He’d reinforced his cruel words from the previous afternoon tonight at her party by flirting and dancing with every girl but her. Even now, if he came to her and said he’d made a mistake, she would fall into his arms. Sadly, that wasn’t going to happen. Finding a new life was the only way to keep sane and hold on to what remained of her pride.

The next day, still raw from Jared’s rejection, Jennie told Annie and Ralf, “I’ve decided to study in England.”

Annie flopped down onto the couch in the den, her face devoid of color. “This is sudden, Jennie. I know it’s what your mother wanted, but you seemed set against the idea until now.”

“I’m glad you pushed me to apply and keep my options open.” Jennie smiled at her.

“What changed your mind?” Annie wiped a stray tear from her cheek.

“I want to try out another way of life.” Jennie shrugged. “My English connections make London the obvious choice.” She studiously avoided looking in Jared’s direction, sure he would guess he was the real reason behind her decision. He remained silent, offering no pleas for her to change her mind. What did she expect? This was real life, and she already knew how cruel it could be.

“You should go and give it a try, Jennie. Get to know your mother’s family and a different way of life. We’ll still be here for you when you need us.” Ralf enveloped her in a fatherly hug.

Jennie smiled through her tears, surprised he thought it was a good idea. Annie brushed copious tears from her own face, and Jennie ran into her arms, part of her unwilling to leave the only people in the world who truly loved her. But Jared’s continued silence made changing her mind impossible. She was leaving the Unicorn and Texas, maybe forever.

A Secret History of the Bangkok Hilton by Chavoret Jaruboon, Pornchai Sereemongkonpol
Girl Gone Nova by Pauline Baird Jones
Out of Focus by Nancy Naigle
Louder Than Words by Laurie Plissner
Making New Memories by Karen Ward
Speak Through the Wind by Allison Pittman
Flying Shoes by Lisa Howorth
The City of Palaces by Michael Nava
Fascinated by Marissa Day
Lionheart by Sharon Kay Penman
Our partner