Read The Dangerous Passion: Why Jealousy Is as Necessary as Love and Sex Online

The Dangerous Passion: Why Jealousy Is as Necessary as Love and Sex 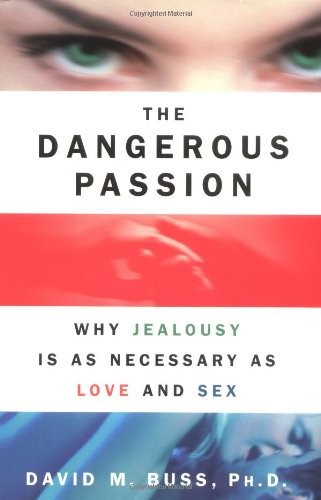 Why Jealousy Is as Necessary
as Love and Sex

The Evolution of Desire: Strategies of Human Mating

Evolutionary Psychology: The New Science of the Mind

A Division of Simon Schuster Inc.

All rights reserved, including the right of reproduction in
whole or in part in any form.

T
HOSE WHO DEVOTE THEIR LIVES
to
penetrating the mysteries of human nature face an unusual circumstance, one in
which the targets of study happen to include their own minds. Sometimes it’s a
personal insight that leads to a scientific discovery, but in my case, it was a
scientific finding that led to a personal revelation. In one of my first formal
studies of jealousy, we asked women and men to imagine their partner having sex
with someone else. Some people displayed intense sexual jealousy, shaking with
rage when these disturbing images filled their heads. Others seemed less upset,
at least on the surface. I wanted to find out why. One critical factor turned
out to be whether or not a person had already experienced a committed sexual
relationship. Those who were either in love or who had loved and lost,
displayed far more florid sexual jealousy than those who merely longed for love
but had never experienced it.

As these results rolled off the computer printer, memories
flooded my head of previously buried events of my past. As a youth of 17,
influenced no doubt by the prevailing cultural ideologies of the time, I
publicly proclaimed that my girlfriend’s body was her own, that she could have
sex with anyone she wanted, and that jealousy was an immature emotion of
up-tight, hung-up, unliberated individuals. I, of course, was above all that.
There was only one problem—I didn’t have a girlfriend! A year later, when I
became involved for the first time, my feelings about the matter suddenly
reversed. It was as though a jealousy switch in my brain, previously on the
“off ” setting, suddenly got flipped to “on.” I found myself glaring at other
men who seemed a bit too friendly to my partner at parties, calling her up
unexpectedly just to see whether she was where she said she would be, and
thinking that every man harbored secret desires for her. I became aware of a
deep dimension of my own psychology that had previously lain dormant.

Over the past decade, together with many talented colleagues, my
scientific research has focused on the dangerous passion of jealousy and its
tethered soul mate, the specter of infidelity. In the course of this work I
discovered that some private demons are surprisingly widespread afflictions.
This book represents a synthesis of that work, as well as of studies conducted
by hundreds of scientists from around the world. I owe a deep debt to many who
contributed directly or indirectly to its content and form. The first thanks
goes to Don Symons, who helped me through friendship, published writings,
dozens of discussions, and generous feedback on my work. Next, I owe special
gratitude to Leda Cosmides and John Tooby, whose seminal writings and hours of
lively discussion now spanning nearly two decades have greatly influenced my
thinking. Martin Daly and Margo Wilson pioneered the exploration of the
perilous passion, illuminated its special danger to women, and have generously
helped to clarify my thinking over the years.

The incomparable Todd Shackelford must be singled out, since one
could not ask for a more superlative collaborator. He has been co-author with
me on more than a dozen publications on topics ranging from signals of
infidelity to tactics men and women use to keep mates. Heidi Greiling helped to
get me out of my male mind enough to collaborate on a raft of studies on the
hidden dimensions of women’s sexual psychology. Martie Haselton, primary author
of
Error Management Theory,
brought insight to the signal detection
problem and the importance of women’s ovulation cycles. Josh Duntley
contributed to understanding the extreme violence that jealous men sometime
direct against women. April Bleske helped me to understand why friends are
sometimes rivals and why men and women have so much difficulty being “just friends.”
Barry Friedman helped to explore how men and women “test” mating bonds.

My agents, Katinka Matson and John Brockman, were instrumental
in helping me to shape the vision for this book. Philip Rappaport, of The Free
Press, trained his fine editorial eye on an early draft of this book and
brought a unique sensibility to its final tone. Rosemary Davidson, of
Bloomsbury Publishers, April Bleske, Joshua Duntley, Barry Friedman, Martie
Haselton, and Todd Shackelford all offered insightful comments on the entire
book.

Finally, I owe special thanks to the thousands of women and men
who generously opened their lives to reveal some of the darker secrets of the
dangerous passion.

Jealousy on Mars and Venus

If I Can’t Have Her, Nobody Can

Why Women Have Affairs

Jealousy is not only inbred in human nature, but it is the most
basic, all-pervasive emotion which touches man in all aspects of every human
relationship.

E
VERY HUMAN ALIVE IS AN
evolutionary success story. If any of our
ancestors had failed to survive an ice age, a drought, a predator, or a plague,
they would not be our ancestors. If any had failed to cooperate with at least
some others in the group or dropped below a minimal position in the social
hierarchy, they would have met certain death by being cast out from the group.
If even one had failed to succeed in choosing, courting, and keeping a mate,
the previously inviolate chain of descent would have irreparably broken, and we
would not be alive to tell the tale. Each of us owes our existence to thousands
of generations of successful ancestors. As their descendants, we have inherited
the passions that led to their success—passions that drive us, often blindly,
through a lifelong journey in the struggle for survival, the pursuit of
position, and the search for relationships.

We usually think of passion as restricted to sex or love, the
burning embrace or constant craving. But it has a broader meaning, referring to
the drives and emotional fires that propel us in our quests through life. They
sometimes glow quietly, but at other times they burst into full flame. They
range from tranquil devotion to violent eruption. Their expression yields
life’s deepest joys, but also the cruelest suffering. And although we commonly
think of passion as a force opposed to reason and rationality, something to be
tamed or overcome, passions when properly understood have a crystalline logic,
precise purpose, and supreme sensibility.

The drives that stir us out of bed at dawn and hurl us headlong
into our daily struggles have two sides. On the positive side, passions inspire
us to achieve life’s goals. They impel us to satisfy our desire for sex, our
yearning for prestige, and our quest for love. The dazzling plays of
Shakespeare, the mezmerizing art of Georgia O’Keeffe, and the brilliant
inventions of Thomas Edison would not exist if passion had not stirred them
from repose and impelled creation. Without passion, we would lie listless in
bed, for there would be no motivation to do anything at all.

But passions carry a darker, more sinister side. The same
passions that inspire us with love can lead to the disastrous choice of a mate,
the desperation of unrequited obsession, or the terror of stalking. Jealousy
can keep a couple committed or drive a man to savagely beat his wife. An
attraction to a neighbor’s spouse can generate intoxicating sexual euphoria
while destroying two marriages. The yearning for prestige can produce
exhilarating peaks of power while evoking the corrosive envy of a rival and a
fall from a greater height.
The Dangerous Passion
explores both the
destructive and triumphant sides of human desires.

Together with many colleagues, my research over the past decade
has centered on exploring the nature, origins, and consequences of the passions
of men and women, with a special focus on jealousy, infidelity, love, sex, and
status. Our goal has been to seek a deeper understanding of what makes men and
women tick, the desires that drive people to heights of success or depths of despair,
and the evolved mechanisms of mind that define who we are. This book
illuminates the dark side of sexual treachery, the mysterious puzzle of
romantic love, and the central role of jealousy in our intimate relationships.

Some argue that these mysteries should be left alone, pristine
and untrammeled, shielded from the harsh glare of scientific scrutiny. But is
the woman who has her freedom and sense of safety crushed by a jealous husband
better off unequipped with the knowledge of how to prevent her torment? Is the
man obsessed by unrequited love better off failing to understand the underlying
reasons for his rejection? Ignorance may sometimes be bliss, but it can also
cause needless anguish. My hope is that revealing the underlying logic of
dangerous passions will be intellectually illuminating, provide one path for
understanding the distress we experience at the hands of our lovers and rivals,
and just possibly improve in some small measure the tools for coping with the
untamed demons in our lives.

At the center of
The Dangerous Passion
is an
exploration of a hazardous region of human sexuality—the desires people
experience for those who are not their regular partners and the jealous shield
designed to combat its treacherous consequences.

Think of a committed romantic relationship that you have now, or
that you had in the past. Now imagine that your romantic partner becomes
interested in someone else. What would upset or distress you more: (
a
)
discovering that your partner is forming a deep emotional attachment, confiding
and sharing confidences with another? or (
b
) discovering that your
partner is enjoying passionate sex with the other person, trying out different
sexual positions you had only dreamed about? Both scenarios are distressing, of
course, but which one is more distressing? If you are like the majority of
women we surveyed recently in the
,
the
,
,
,
, and
, you
will find the emotional infidelity more upsetting. The answer seems obvious, at
least to women. The majority of men, however, find the prospect of a partner’s
sexual infidelity more agonizing. The gulf between the sexes in emotional
reactions to infidelity reveals something profound about human mating
strategies.