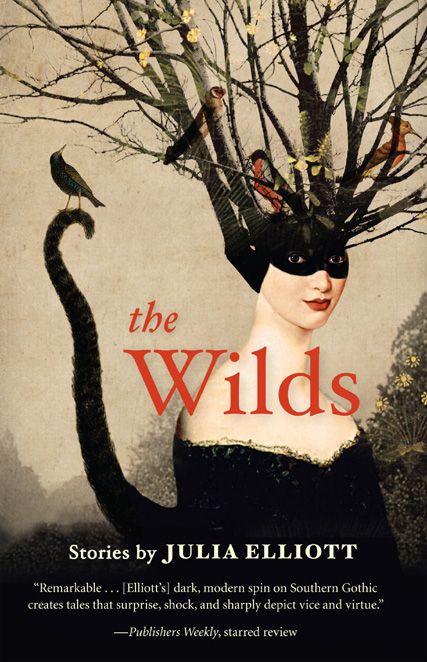 I
n a South Carolina nursing home, a lost world reemerges as a disabled elderly woman undergoes newfangled brain-restoration procedures. At a deluxe medical spa on a nameless Caribbean island, a middle-aged woman hopes to revitalize her fading youth with therapies that combine cutting-edge medical technologies, holistic approaches, and the pseudo-religious dogma of Zen-infused self-help. And in a mill town, an adolescent girl is unexpectedly inspired by the ravings and miraculous levitation of her fundamentalist friend’s weird grandmother. These are only a few of the scenarios readers encounter in Julia Elliott’s debut collection,
The Wilds
. In these genre-bending stories, Elliott blends Southern gothic strangeness with dystopian absurdities, sci-fi speculations with fairy-tale transformations. Without abandoning the tenets of classic storytelling, Elliott revels in lush lyricism, dark humor, and experimental play.

All rights reserved. No part of this book may be used or reproduced in any manner whatsoever without written permission from the publisher except in the case of brief quotations embodied in critical articles or reviews. For information, contact Tin House Books, 2617 NW Thurman St., Portland, OR 97210.

The wilds : stories / by Julia Elliott.

These stories appeared, sometimes in slightly different form, in the following publications: “The Whipping” in the
Georgia Review
and
Best American Fantasy 2007
; “Rapture” in the
Georgia Review
; “Jaws” in the
Mississippi Review
; “Organisms,” “The End of the World,” and “Feral” in “
Conjunctions
; “Regeneration at Mukti” in
Conjunctions
and
The Pushcart Prize XXXVII: Best of the Small Presses
; “The Wilds” in
Tin House
and
Fantastic Women: 18 Tales of the Surreal and Sublime from Tin House
; and “LIMBs” and “Caveman Diet” in
Tin House
.

B
runell Hair lived in a lopsided mill house with her mama and her uncle and her little withered-up critter of a grandmaw. In honor of her eleventh birthday, she was having a slumber party, but so far, only my best friend, Bonnie, and I had showed. Our mothers had had some kind of powwow, during which they’d smoked cigarettes and worked themselves into a tizzy over how vain and selfish we were getting, finally declaring that sleeping over at Brunell’s house would be just the thing to “teach us a lesson” about how fortunate and spoiled we were. Truth told, we wanted to see Brunell in her natural habitat. We wanted to see the creepy troll-child’s lair, witness the antics of her Jesus-freak mother, spy on her uncle, who’d appeared
in several television commercials, and see her Meemaw speak in tongues.

Brunell’s mother, who wore hideous dresses and sported an old-fashioned mushroom cloud of hair, was making hamburger patties. The other two family members were holed up in their rooms, Meemaw praying for the soul of her gay son, the uncle just sitting up there enduring the prayers she threw at him, sighing every five minutes over the man in California who’d broken his heart. According to Brunell, ever since Meemaw’s husband died, the woman did nothing but pray and eat candy and watch the TV she’d won at a church raffle. According to Brunell, although her mother could spit her share of prayers at the sins of the world, she stayed busy while doing it. She kept a spotless house, vacuuming their pink wall-to-wall carpet three times a week and scrubbing their kitchen until it gleamed.

Huddled out back behind a clapboard shed, smoking the cigarette butts that Bonnie and I had stolen from our mothers, we tried to teach Brunell to French inhale. Scrunching her angelic frog-face, Brunell blew out a smoke cloud that’d definitely not laced her lungs.

“Smoking is a sin.” Brunell tried another puff.

“Whatever,” said Bonnie. “Where’s your uncle?”

“What does she talk about?” asked Bonnie.

“The Blondie song?” I said.

“The end of the world, stupid.”

Though I knew about the book of Revelation, I’d never heard the end times referred to as the Rapture before. Now I couldn’t help but picture Jesus cruising down to Earth on a glittery gold escalator, his white robes spattered with disco light. Two angels hovered above him, twirling a mirrored ball. Down in the pulsing city, Debbie Harry waited in a red convertible Corvette. All decked out in ruby spandex, she winked and blew Jesus a kiss. The Son of God hopped into her car and they drove off toward the beach, the wind mussing his hippie hair into a wild, Mötley Crüe mane.

While her mother slaved over a skillet of french fries, Brunell played her uncle’s commercials on the
VCR
he’d brought from California. We watched Uncle Mike, named for the archangel Michael, make out with a
cheerleader in a Big Red commercial. We watched him carve into a bar of Irish Spring soap while perched on the back of a black stallion. We sighed as Brunell’s handsome uncle portrayed the dangerously masculine essence of Oleg Cassini cologne: he drove a Rolls-Royce, played polo, flew his private jet to an exotic beach, where he dallied on a yacht with a chick in a French-cut bikini.

“Goddamn,” said Bonnie, who liked to make Brunell cringe. “He’s fine as all get out.”

“First of all,” I said, “a training bra doesn’t make you a woman. Secondly, when you’re gay, you’re gay.”

“He’s gay, but Meemaw’s been praying for that to change. She’s been praying for a good Christian woman to come along and lead him down the path to holy matrimony. If her prayers worked only halfway, I reckon they’d turn him into a bisexual.”

“I do hope the Lord has answered her prayers,” said Bonnie. And she solemnly walked over to the picture
of Jesus that hung above their TV. She knelt before the handsome, blond Messiah and pretended to speak in tongues.