Read The Day of the Dead Online

The Day of the Dead 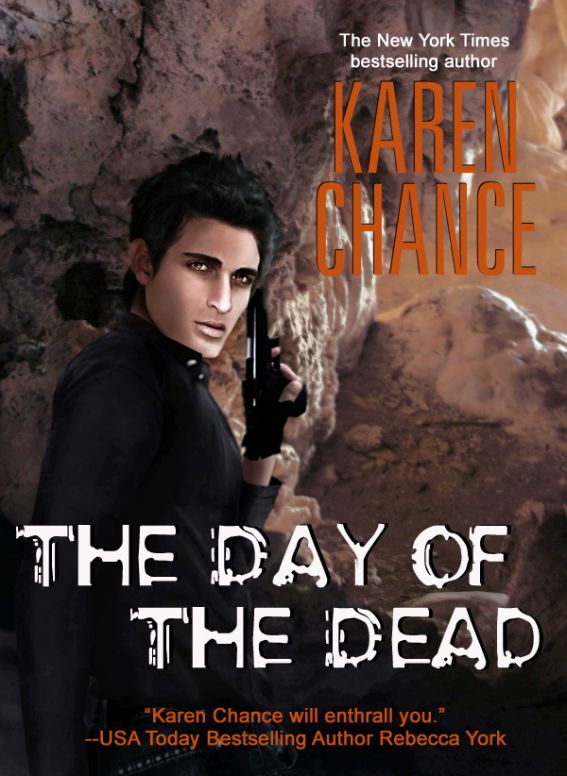 The Day of the
Dead

Thank you for downloading this free
ebook. You are welcome to share it with your friends. This book may
be reproduced, copied and distributed for non-commercial purposes,
provided the book remains in its complete original form. If you
enjoy the book, please visit KarenChance.com to learn more about
the Cassandra Palmer universe.

‘
I’m looking for my
brother,’ the girl repeated, for the third time. Her accent was
terrible, New Jersey meets Mexico City, making her difficult to
understand, but Tomas doubted that that was the problem. The
largely male crowd in the small cantina weren’t interested in
a
gaba
with a sob
story, even one who was tall and slim, with slanting hazel eyes and
long black hair.

Japanese ancestry, Tomas decided, or
maybe Korean. There might be some Italian, too, based on the slight
wave in her hair and the Roman nose, which was a little too
prominent for her slender face. She was arresting, rather than
pretty, the kind of woman you’d remember, although her outfit would
probably have insured that anyway. He approved of the tight cargo
pants and the short leather jacket. But the shotgun she wore on a
strap slung over her shoulder and the handgun at her waist took
away from the effect.

The bartender suddenly snapped to
attention, but he wasn’t looking at her. His hand slid under the
counter to rest on the shotgun he kept there. Tomas hadn’t seen it,
but he’d smelled the old gun oil and faint powder traces as soon as
he walked in. But the man who slammed in through the door was
merely human.

‘
Hijole
, Alcazar!’ the bartender shouted, as the room exploded in
yells of abuse. ‘What do you mean, bursting in here like that? Do
you want to get shot?’

The man shook his head, looking
vaguely green under the cantina’s bare bulbs. ‘I thought I heard
something behind me,’ he said shakily, joining a few friends at an
already overcrowded table. ‘On the way back from the
cemetery.’

‘
You shouldn’t have been
there so late,’ one of his friends reproached, sliding him a drink.
‘Not tonight.’

‘
¡Aguas!
You will do your daughter no good by joining
her!’

Then the bartender suddenly let out a
laugh, and slid another round onto the men’s table. ‘I wouldn’t
worry,’ he said heartily. ‘From what I hear, even your Consuela
doesn’t want you. Why would the monsters?’

The room erupted into relieved
laughter as the man, his fright forgotten, stood up to angrily
defend his manhood. ‘She ran off with some wealthy bastard,’ he
said, shooting Tomas an evil look.

Tomas calmly sipped mescal and didn’t
respond. But he wished for about the hundredth time that he’d given
a little more thought to blending in. His reflection in the chipped
mirror behind the bar, while not Anglo, stood out as much as the
girl’s.

The high cheekbones and straight black
hair of his Incan mother had mixed with the golden skin and
European features of his Spanish father, resulting in a combination
that many people seemed to find attractive. He’d always found it an
inconvenient reminder of the domination of one half of his ancestry
by the other.  The conquest of a continent written on his
face.

He couldn’t honestly blame the locals
for mistaking him for a wealthy city dweller, despite the fact that
he’d been born into a village even poorer than this one and was
currently completely broke. He’d picked up his outfit, a dark blue
suit and pale grey tie, at an airport shop at JFK. He’d needed a
disguise, and the suit, along with a leather briefcase and a quick
session with a pocket knife in front of a men’s room mirror, had
changed him from a laid-back college student with a ponytail to a
thirty-something businessman in a hurry.

He’d eluded his pursuers, but with no
money he’d been forced to use a highly illegal suggestion on the
clerk. Since then, he’d lost track of how many times he’d done
something similar, using his abilities to fog the minds of airline
employees, customs agents and the taxi driver who had conveyed him
a hundred miles to this tiny village clinging to the side of a
mountain.

Every incident had been a serious
infraction of the law, but what did that matter? If any of his kind
caught up with him, he was dead anyway. He just wished he’d thought
to find something else to wear after landing in Guadalajara. There
weren’t a lot of locals in $1200 suits.

Tomas couldn’t see the
outfit that helped him stand out like a sore thumb, because an
altar to the souls of the dead had been placed in front of the
mirror. Hand carved wooden skeletons in a variety of poses sat
haphazardly on the multi-tiered edifice, each representing one of
the bartender’s family members who was gone but not forgotten. One
hairless skull seemed to grin at him, its tiny hand wrapped around
an even tinier bottle of Dos Equis – presumably the man’s favourite
drink. A regular-sized bottle stood nearby, a special treat for the
spirit that would come to visit this night. It was
El Dia de la Muertos
, the
Day of the Dead.

A particularly fitting time, Tomas
thought, for a vampire to return home.

At least resentment of the city
slicker gave the men something to talk about other than their fear.
They didn’t relax, being too busy shooting suspicious glances his
way, but most of them let go of their weapons. Which is why
everyone jumped when a shot exploded against the cracked plaster
ceiling.

It was the girl, standing in the
middle of the cantina, gun in hand, ignoring the dozen barrels
suddenly focused on her head. ‘My. Brother,’ she repeated, pointing
the gun at the bartender, who had lost his forced joviality. ‘Where
is he?’

‘
Put your weapon
down,
senorita
.
You have no enemies here,’ he said, eyeing her with understandable
concern. ‘And I told you already. No one has seen him.’

‘
His car is parked by the
cemetery. The rental papers have his name on them. And the front
seat has his handprint – in blood.’

She threw the papers on the bar, but
neither they nor her speech seemed to impress the bartender.
‘Perhaps, but as I told you, this is a small town. If he had been
here, someone would know.’

The glasses on the shelf behind him
suddenly exploded, one by one, like a line of firecrackers. The gun
remained in the girl’s hand, but she hadn’t used it. Tomas slowly
set his drink back down.

‘
Someone here does know.
And that someone had better tell me. Now.’ Her eyes took in the
bar, where most of the men’s weapons were still pointed at her.
That fact didn’t seem to worry her nearly as much as it should
have.

‘
I saw a stranger.’ The
voice piped up from a table near the door, and a short, stocky man,
dressed in the local farmer’s uniform of faded jeans, cotton work
shirt and straw hat, stood up. ‘He was taking photographs of the
ceremony, out by the graves.’

‘
I told him to go away,’
the man said. ‘This is a day for the dead and their families. We
didn’t want him there.’

‘
But he didn’t leave. His
car is still there!’

The man shrugged and sat back down.
‘He said he was going to photograph the church, and I saw him
walking towards town. That’s all I know.’

‘
The church is the white
building I saw driving in?’

‘
Yes.’ The bartender spoke
before the man could. ‘I can show you, if you like.’ He motioned
for the boy who’d been running in and out all night from the back,
clearing off tables and wiping down the bar. ‘Paolo can take over
for me here.’

The voices spoke up from
all directions, but the bartender shrugged them off. He brought out
the shotgun and patted it fondly. ‘
Ocho
ochenta
. It’s only a short way. And no one
should go anywhere alone tonight.’

The murmuring didn’t die down, but no
one attempted to stop him. Tomas watched them leave, the bartender
solicitously opening the door for the girl. His broad smile never
wavered, and something about it made Tomas’s instincts itch. He
gave them a couple of minutes, then slid off his stool and
followed.

There was little light, with the sky
already dark overhead, the last orange-red rays of the sun boiling
away to the west. But his eyes worked better in the dark.  And
in any case, he could have found his way blindfolded.

The village looked much the same as it
had for the last three millennia. Many of its people could trace
their ancestry back to the days when the Mayan Empire sent tax
collectors here, to reap the benefits of the same plots these
farmers still worked. The 500- year-old village where he’d grown up
in what was now Peru seemed a young upstart by comparison. It was
gone now, bulldozed to make way for a housing development on the
rapidly expanding outskirts of Cuzco. But although he hadn’t been
back here in almost a century, nothing seemed to have
changed.

A trail of bright yellow
petals led the way to a small church with crumbling stone steps
overlooking the jungle that floated like green clouds against the
mountains of the Oaxaca. The church was still draped with
the
flor de muertos
, garlands of marigolds, from the morning service. He went in
to find the same old wooden crucifix on the altar, surrounded by
flickering votive candles and facing rows of empty pews. He edged
around it and paused by the back door, where the sweet, pungent
smell of incense mingled with the damp, musty odor of the jungle.
Beyond it, out in the twilight, he caught a whiff of the girl’s
perfume.

The church faced the red earth of
town’s only street.  Behind it, the jungle washed up almost to
the steps, except for the area where a small cemetery spilled down
the hillside. It had never been moved despite each summer storm
threatening to wash the bodies out of their shallow graves and into
the valley below.

Tomas picked his way down a
marigold-strewn path to the cemetery gate, pausing beside a statue
of
La Calaca
. The
skeleton lady was holding a placard with her usual warning: ‘Today
me, tomorrow you.’ In many such villages, families stayed all night
at the graves of their dead, waiting to welcome the spirits that
returned to partake of their offerings. But not in this one. Only
four people stood among the flower decked crosses and scattered
graves, and only two of them were alive.

There was little light left, other
than a few burning votives here and there, shining among the
graves. But Tomas didn’t need it to recognize the new additions.
The wind was blowing towards him and it carried their scents
clearly: Rico and Miguel, two thugs in the employ of the monster
he’d travelled a thousand miles to kill.

‘
I saw her. She shattered
them with some kind of spell.’ The bartender was talking, while
Rico held onto the girl.

‘
Why carry all this?’
Miguel held one of the girl’s guns negligently in one hand, with
the rest tucked into his belt. ‘If she’s so powerful?’

‘
I’m telling you, she’s
some kind of witch,’ the bartender said stubbornly. ‘That mage I
sent you this morning was her brother. She came looking for
him.’

‘
Where did you take him?’
The girl demanded, her voice full of cold, brittle
anger.

Everyone ignored her. ‘Her aura feels
strange,’ Miguel said, running a hand an inch or so above her body.
‘Not human, but not exactly mage, either.’