Read The Day of the Lie Online

The Day of the Lie 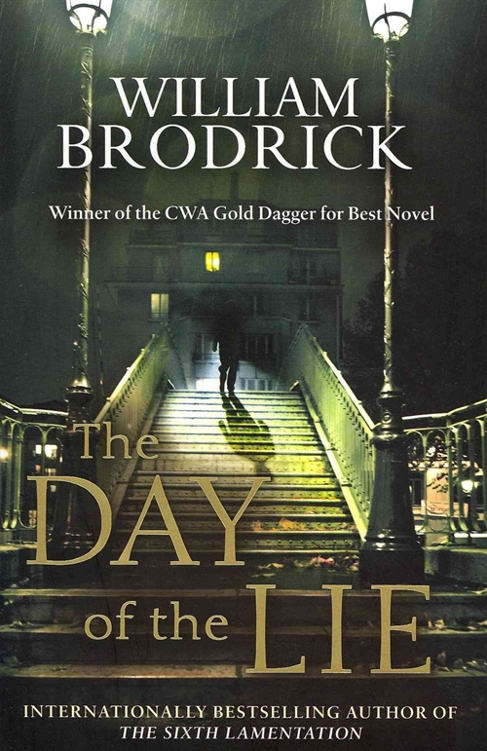 The Day of the Lie

Head of the
Department of Philosophy

After the
Day of the Lie gather in select circle

Shaking
with laughter when our real deeds are mentioned.

An autumn sun lit the beads of dew upon the
pink tiles of Larkwood Priory, the seventeenth-century manor that had once
belonged to a king’s trumpeter. For services rendered — belting out pomp for
the Reformation — he’d been given a Benedictine monastery in Suffolk which he’d
briskly demolished to the benefit of the local building trade, holding back
enough stone and timber to erect a residence of more secular appeal. All that
remained of the former abbey was a line of soaring, broken arches, the white
limestone speckled with lichen and charged with the memory of cowled voices
that had sung while the world lay sleeping.

With a troubled
humph,
Father Anselm Duffy, jazzman, beekeeper and brooder upon life’s conundrums,
put the phone down and turned away from the calefactory window that faced the
glistening, tangled rooftops.

‘You want a
lawyer?’
he
complained, entering the cloister, still hearing his friend’s anxious tone.

After the trumpeter had
blown himself out — and following a noisy inheritance dispute that triggered
three hundred years of real estate trade — a group of monks had returned to the
quiet valley divided by a fast-flowing stream. Penniless and footsore, they’d
taken a boat from Calais after the First World War, a motley band of men from
different shattered nations with eyes on a wider horizon. By then the manor had
crumbled from a prized asset to a maintenance headache that could only be
resolved by donation to a cause deemed worthy. The monks — Gilbertines this
time — had solemnly accepted the title deeds only to mislay them within a week.
Far from the concerns of ownership, their minds had wandered elsewhere, slowly restoring
the tiles, the thatch and the chant, helped by passers-by and well-wishers: anyone
with a mind for the value of reflective living. In time, a deep music had
pervaded the surrounding countryside, its pulse reaching as far as the holding
cells of the Old Bailey where Anselm, then a restless barrister, made a living
explaining the difference between justice and mercy.

He opened the door that
led to the reception area and paused to glower at Sylvester, Larkwood’s
timeless Watchman. White—haired and ascetically thin, his bones almost pushing
through his soft flesh, the old man had never fathomed the relationship between
a telephone and the noise it makes to announce an incoming call. In fairness
there was a large console, flashing lights and three internal lines, each with
their own receiver, but Sylvester would have been baffled by anything more
complex than two tins linked by string. And even then …

‘Sorry, Anselm,’ said
the Watchman, scratching the soft down on his cranium. ‘The thing is, you don’t
get any
warning…
do you see what I mean? It just rings.’

‘Sylvester,’ replied
Anselm, wondering how to break the news gently, ‘the ring
is
the
warning.’

‘Things aren’t what they
once were,’ sighed Anselm.

‘Much that was good has
passed away.’

‘These are the dark
times.’

Sylvester prodded the
phone as if to check it was still alive. ‘Anyway, no harm done. You got the
call.’

‘I did. Your triumph, at
least, remains.’

Having bowed with that
special ceremony reserved for Larkwood’s most frustrating yet best loved elder,
Anselm stepped outdoors remembering the pithy conversation with John Fielding,
the old friend whose urgent call had initially been routed to various
extensions in the monastery where Anselm was least likely to be found.

‘I need a lawyer,’ he
quoted, heading towards the woodshed.

The phrase was laden
with the past. It rang from nineteen eighty-two when Anselm had still been at
the Bar and when John, booted out of Warsaw by the Communist Junta, had come
back to London with a swollen jaw talking about a violent arrest in a graveyard.
The real, abiding injury, however, had been out of sight. The look in John’s
eye told something of the pathology but Anselm had never been able to properly
construe the symptoms. Like Sylvester, he’d needed something simple to hang on
to, and John had become … complicated; he wouldn’t explain. Part of him had
been secretly dying; and localised death — the inner kind — had ultimately left
its imprint. Dragging open the large door that hung on one valiant hinge,
Anselm paused to inhale the warming aroma of dry wood shavings mingled with the
zest of fresh cut timber.

I’d better explain in
person,
John had continued.
You know I don’t like the phone.

There’d been no further
elaboration. John had simply asked if he could come to Larkwood that evening.
I’ll
make a fire,
Anselm had replied, knowing from that pointed reference to the
law that John intended to go back to the cold part of his life: to his secret
meetings with dissident thinkers and his brush with State violence. But Anselm
was also apprehensive. John’s voice had been tense, his breath catching on the
line.

‘Why now?’ murmured
Anselm, running his thumb across the dull edge of an axe. ‘What has happened to
bring back that unforgotten year?’

Lengths of wood, old and
new, were stacked in different piles at opposing ends of the room. Anselm went
for something green, something that was still holding sap.

The Friend of the Shoemaker

The lawyer had written
formally to Madam Róża Mojeska. He’d telephoned, late and early He’d left
brisk messages on the answer machine. He’d written more letters. He’d trailed Róża
around Warsaw in that battered blue 2CV, pleading his case through an open
window. Undeterred by the constant refusals, he’d turned up cold and knocked on
Róża’s door. He’d pushed lightly against the frame, with Róża shoving
back from the other side. He’d flicked a business card through the closing gap.
And now he was having another go — late on a Sunday afternoon.

Róża had only
looked out of the kitchen window by chance. She’d just thrown back a Bison
Grass snifter — on her doctor’s orders — and was about to rinse the glass when
she glimpsed that car parked on the main road, three floors down. Which meant
the lawyer must be on his way up.

‘There’s no stopping
him,’ muttered Róża.

He’s brought a
sleeping bag; he won’t leave until I give in.

Without grabbing a coat
or knowing where she was going, Róża slammed the door behind her and ran
down the corridor towards the fire escape that led to a courtyard of bins and
slumped refuse sacks. She might be 80, but Róża could move. Every day she
walked through the city going nowhere in particular. The exercise kept her
strong. It burned up the energy of untold memories. They were burning now as
she nipped across the yard and entered the dark passage that linked her block
of flats to a neighbouring complex. She hurried close to the wall, her gaze
fixed on the autumn light framed by stained concrete. A plan was forming … she’d
head into town and hang around the Palace of Culture and Science. A gift from
the Soviets, she liked to imagine its demolition. Stepping into the warmth and
light, Róża paused. There were children in the quadrangle. Two girls
turned the rope while a third skipped, her white dress bright and clean, flying
like bunting in the wind. A boy in a tracksuit, bored and brooding, sat on a
step offering advice and insults.

‘Do they know your
story?’ came the voice.

Róża turned wearily
to her side. Leaning on the wall, legs crossed, hands in his tatty jean
pockets, was the lawyer. He’d kept his good shoes on — Róża always noticed
shoes and clothing; it had come with life in an orphanage, that never-forgotten
world of shapeless hand-me-downs and patched elbows — and they still hadn’t
been polished.

‘They need to hear what
you have to say.

‘Will you ever leave me
alone?’ asked Róża, quietly.

Róża closed her
eyes. She listened to the whip of the rope as it struck the ground. She frowned
as the girls counted triumphantly against the boy’s jaded mockery A small part
of her surrendered.

Sebastian Voight, thirty-something,
unshaved, and endowed with a charm as exasperating as it was unconscious,
worked for the Institute of National Remembrance, a body formed, inter alia, to
preserve the memory of patriotic resistance against tyranny and — coming to
MrVoight’s neck of the woods — to prosecute crimes committed by officials of
the former Communist state. There was no statute of limitation: the guilty
could not escape judgement; all that was required were witnesses; then the law
could take its course.

Róża didn’t know
why Sebastian rehearsed all the technical stuff. She’d already read it in the
letters, heard it from a car window and listened to the endless messages.
Perhaps spelling out the government’s intentions was meant to insinuate an
obligation to co-operate. Róża watched the slim, young man, vexed by his
natural confidence, drawn to his easy unrushed manner, almost amused by his
ill-concealed watchfulness: he’d finally got Róża sitting down, and he was
wondering if the old fish had enough strength to wriggle off the hook.

They’d come back to Róża’s
small flat. Tea had been made. Cherries had been washed and piled in a bowl.
They sat facing each other across the dining table, Róża like a patient,
somewhat stiff, Sebastian like a doctor on a house call, hands knitted, and
arms resting on the table. His white shirt hadn’t been ironed below the collar;
the blue linen jacket was loose and creased. He spoke with a low, reassuring
tone.

‘Six months ago we came
into possession of some lost documents. They were compiled by the secret police
back in the eighties, ours and the East Germans’. It’s a joint archive covering
joint operations against certain high profile dissidents. One of the files
deals with the Shoemaker.’

Sebastian waited a
moment to see if Róża would react. Everyone had heard of the Shoemaker. He
was one of the giants of dissident thought, an intellectual of the velvet
revolution, a writer who’d helped craft the ideas and tactics that would bring
down authoritarian communism. While his collected essays were required reading
in every university, they’d remained in demand where they’d first appeared, on
the street. Unlike other philosopher kings of East-Central Europe, however, the
Shoemaker had never been crowned with political office. His identity remained
unknown. Sebastian’s expectant pause dried out. Róża wasn’t going to take
the bait and reveal his name; instead, she reached for a cherry.

The Body in the Woods by April Henry
Accordance by Shelly Crane
The Inner Struggle: Beginnings Series Book 7 by Jacqueline Druga
The Edge of the World by Kevin J. Anderson
When Bad Things Happen to Other People by John Portmann
The Countdown to Thirty by Nefertiti Faraj
To Brew or Not to Brew by Joyce Tremel
Tin Soldier: a short story by Nelson, Resa
A Woman in Berlin : Eight Weeks in the Conquered City: A Diary by Marta Hillers
Go Deep: A Bad Boy Sports Romance by Bella Love-Wins
Our partner