Read The Dead Have No Shadows Online

The Dead Have No Shadows 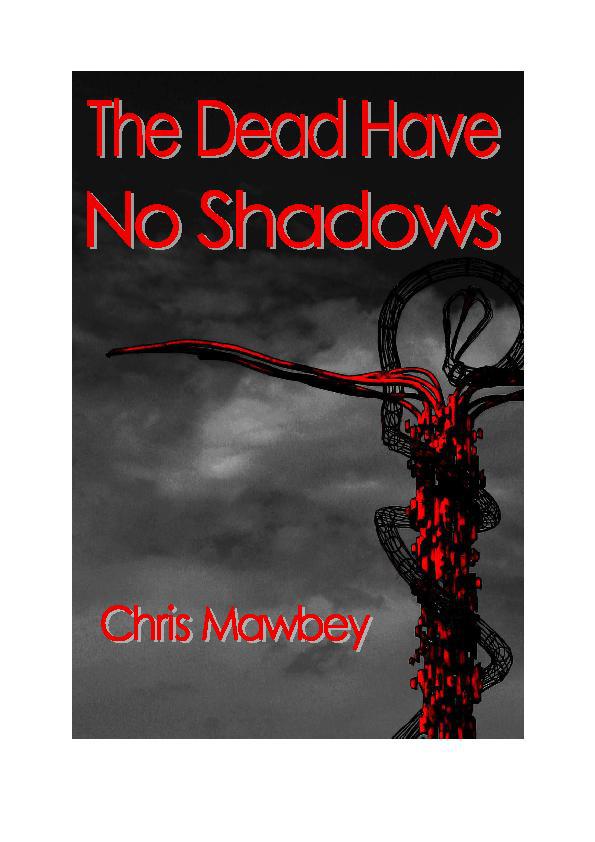 The Dead Have No Shadows

This book is sold subject to the condition that it shall not, by way of trade or otherwise, be lent, re-sold, hired out, reproduced, scanned or distributed in any form, including digital and electronic or mechanical, including photocopying, recording, or by any information storage and retrieval system, without the prior written consent of the author, or otherwise circulated in any form of binding or cover other than that in which this is published and without a similar condition including this condition being imposed on the subsequent purchaser.

First published in 2012 by Chris
Mawbey
at Amazon.

This book is a work of fiction.  All characters, names, places and incidents portrayed in this book are either the product of the author’s imagination or used fictitiously, and any resemblance to real people, both living and dead, or events is purely coincidental.

Birds scattered and children screamed as the shots rang out.  Three holes appeared in Mickey Raymond’s chest.  He staggered backwards and crashed against the plate glass window of Barclays Bank - the bank he had just robbed.

Two of the bullets left exit wounds the size of oranges in Mickey’s back.  The third bullet, the one that would be the cause of Mickey’s death, deflected off a rib and grazed his aorta before lodging in his shoulder blade.  This graze would later tear whilst surgeons were battling to save Mickey’s life.

Mickey’s only concern at the moment though, was for the state of his tee-shirt.  He watched the blooms of blood around each wound spread in a macabre tie-dye before merging into a red bib.

Oh fuck, he thought, Mum will kill me.

Shock and rapid blood loss meant Mickey’s legs could no longer hold him up.  He slid down the window leaving a red smear across the face of the poster girl advertising the latest loan rates.

Despite his wounds Mickey’s senses became enhanced.  He heard the plastic clatter of the replica Berretta he’d been carrying as it hit the ground.  He smelt the cordite, the iron rich tang of his blood and the hint of roasted flesh where the bullets had punched through him.  There was also the smell of urine.  Mickey hoped that he hadn’t pissed himself – that would be so embarrassing.  His head rolled to one side and he could see
Jonno
standing in a puddle of his own making.

Jonno
was a good lad really.  Daft as a brush but he never intentionally hurt anyone.  He could never be trusted to cope with anything too difficult though.  That was why Mickey
had been roped into doing this – even though it was
Jonno’s
job.

Jonno
had always done what Mickey had told him, and nearly always without question.  Mickey had liked that.

Mickey spotted the holdall with the money in it - he was sure there was enough cash in there to get
Jonno
out of the hole he’d landed himself in.
Jonno’s
water was spreading towards the bag.  Mickey didn’t want the money to smell of piss.  He tried to reach for the bag but found that his arms wouldn’t work.

Pick the bag up and go,
Jonno
, he thought, what are you waiting for?

People were crowding around Mickey now.  They were dressed in black and were shouting at him.  These must be the bastards who had shot him.

Was there any need for that?

Mickey’s senses were beginning to fade now and he couldn’t understand what the people were saying.

What were they shouting at him for anyway?

What did they expect him to do?

Mickey saw
Jonno
get pushed to the ground.  His friend lay face down in his puddle while his hands were cuffed behind his back.

Leave him alone you bastards, Mickey tried to say but the capacity for speech seemed to have deserted him.

Mickey thought about his Mum.

Who would tell her what had happened?

What would they tell her?

Would they let
Jonno
out so that he could go and tell her what a mess this all was?

Jonno
could get his Dad to drive Mickey’s Mum to the hospital.  Mickey hoped the nurses would wash the blood off his tee-shirt before Mum got there.

Someone else appeared in Mickey’s diminishing field of vision.  He wasn’t one of those black dressed
shouty
bastards.  This person was dressed in green.  There were badges on his tunic that Mickey couldn’t read.  He was reminded of the paramedics on
Casualty
.  Mum liked to watch that on Saturday nights.  The man was talking but Mickey couldn’t make out what he was saying.  All Mickey seemed to be able to hear was a whistling sound every time he breathed, and a slow squelchy pumping sound as his heart did its best to empty all of Mickey’s blood onto the pavement.

The paramedic lowered his face and looked into Mickey’s eyes.  The man had a goatee beard.  No, it wasn’t a goatee it was more a patch of black and white hair growing from the lower lip and hanging down over a hairless chin.  The paramedic had a ring in the lobe of his left ear.  Hanging from this was a small, grinning gold skull.  Mickey looked into the man’s eyes.  The left one was blue and the right one was brown.

That’s odd, thought Mickey.  His final thought before darkness closed around him was, I must tell Mum about that.

Mickey was in an ambulance.  Not so strange given that he had just been shot – but it took him a few moments to work out what was wrong.  He was sitting on a short bench that ran part way along the side of the vehicle.

So who was that lying on the trolley with the paramedic working on him?

Mickey leaned forward and looked around the shoulder of the medical man.  The shock of self recognition coincided with an alarming blip on the heart monitor that was attached to his bloodied body.

There was a
cannular
in his arm and a bag of clear liquid was dripping down the plastic tube into his body.  The paramedic glanced over his shoulder at the Mickey sitting on the bench.

“It’s not looking good for you,
Laddie
,” he said with a soft Scottish accent.  The paramedic nodded at the body lying on the trolley.  “I can’t see how the
doctors’ll
be able to save you.”

Mickey hadn’t got a response to that.  He was trying to work out how he was lying there plumbed into the ambulance’s systems yet was also sitting here on this bench, apparently in good health, being spoken to by the odd eyed paramedic.

Drugs, one of Mickey’s pet hates, were the source of the shit that
Jonno
was in and were the reason they’d both been forced to do the bank raid.

He shouldn’t have let
Jonno
force that stuff on him earlier on.  What was it doing to him?

The monitor above the prostrate Mickey’s head was happily calling out that his pulse and blood pressure were dangerously low and falling further.

The paramedic was smiling at Mickey.  He ran a hand through a mass of spiky black hair then, still smiling, shook his head.

“You’re a goner, Mickey,” he said.  “Looks like they managed to get you.  There’s no point wasting anymore of this stuff.”  He reached up and turned off the tap underneath the bag of fluids.

That action finally galvanised a response from Mickey.  “What are you doing?  You’ll kill me.”

“Kill you? Me?” laughed the paramedic.  “I think those three bullets have done that job.”  He slapped the cheeks of the unconscious body.  The head rolled left and right with each slap, showing no signs of resistance.

Mickey instinctively raised a hand to his face to protect himself.  His cheeks felt
faintly warm and sore.

“Say nothing and stay close to me.  Stay very close.”

Mickey started to protest but the paramedic silenced him with a raised finger.

The trolley carrying the body was lowered to the ground and was met by the emergency team.  The team was updated on the patient’s condition as the trolley was briskly wheeled into the hospital’s Accident and Emergency department.

As the group swept through the doors they passed a man waiting by the entrance.

Mickey thought the man must be in fancy dress because he looked like a throwback to the nineteen sixties.  He was dressed in an Afghan coat and had long, greasy blonde hair held in place by a black head band.  He wore a pair of round
lensed
sunglasses on the bridge of a hooked nose.

The lenses of the sunglasses were so tiny that Mickey thought they were pointless.   They were too small to protect the man’s eyes.  But then Mickey couldn’t see the man’s eyes.  He could see where they should have been but instead of eyes there were two black pits of emptiness.  There was a depth to these sockets that spoke of despair, misery and never ending suffering.  Mickey felt himself being pulled towards the two voids.  Though he knew they offered nothing but pain there was an allure about them – an attraction that was difficult to resist.  He took a step towards the strange man.

A stronger, more insistent pull turned Mickey away from the weird spectator.  He was dragged along by the trolley though it was now several yards away from him.  Mickey turned and followed his failing body into the hospital.  He didn’t see the look of fury on the John Lennon look-a-like’s face as he walked away from him.

Mickey caught up with the trolley but no-one paid him any attention.  Even the odd- eyed paramedic ignored him.  The trolley was wheeled straight into the resuscitation unit where more medical staff were waiting.  Mickey’s body was lifted and placed, unceremoniously, on a treatment table.

“Does our patient have a name?” asked the more senior looking of two attending doctors.  He glanced at the paramedic.

“Michael Raymond,” replied the paramedic.  “Mickey, to his friends.”