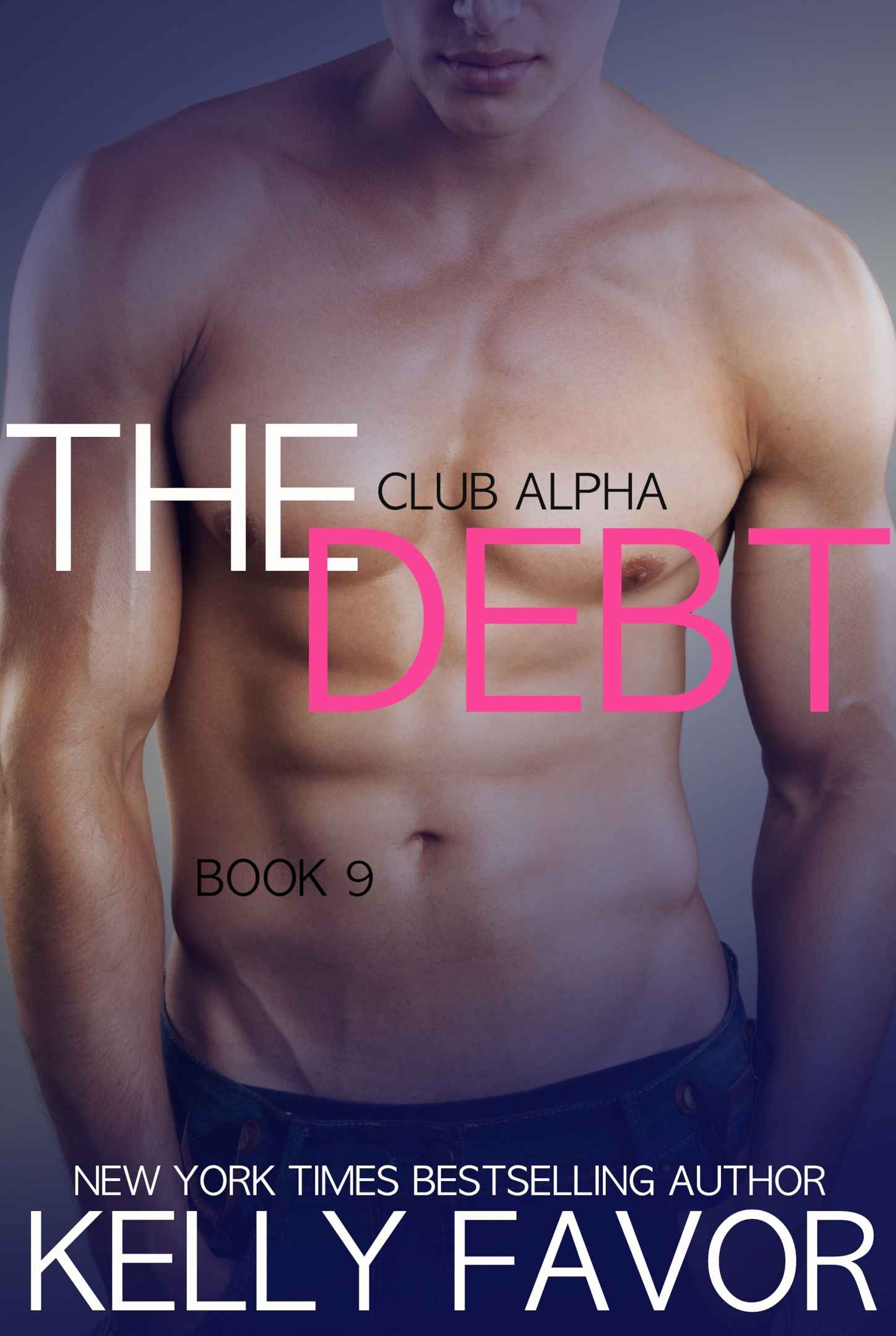 A man had come looking for Faith Connor,
and she didn’t want to go anywhere with him.

“Excuse me, Miss,” the man said with a
subtle frown, “it’s time for the Meet and Greet.

The only reason she was even at the
football stadium in the first place was because she’d won some prize—in a
contest she didn’t even know she’d entered.

The announcement had come in the mail
one day, a letter stating that she’d been awarded the Grand Prize in the C.T.
Bank Fall Giveaway.

At first, Faith been skeptical, but the
prize had checked out as being legitimate after a quick Internet search.

The tickets allowed her to bring up to
three guests, so she’d decided to invite her parents and sister against her
better judgment.

What she hadn’t realized was that the
Meet and Greet didn’t apply to everyone—it only applied to her.

At least, that’s what this man was
telling her now, as he stood in the doorway of the VIP clubhouse and beckoned
her to come somewhere alone with him.

She didn’t want to leave the warm clubhouse
and be taken to…well…wherever he was going to take her.

The man who’d arrived at the Clubhouse to
bring her to the Meet and Greet was large.

He almost reminded her of an ogre, with oversized features and icy green
eyes that she immediately mistrusted.

Even though he apparently worked for the team, or perhaps the stadium,
she simply felt a physical aversion to accompanying him anywhere.

“It’s what you signed up for,” the ogre
said, his annoyance now plainly showing.

“I’ll go if she doesn’t want to,” Dad
offered, as he took a sip from his cup of beer and then gnawed on a Buffalo
wing.

The ogre shook his head.

“I’m sorry, but the terms of the prize
state that only one person, the one who filled out the appropriate paperwork,
is allowed to go to the Meet and Greet.”

His forbidding eyes focused on her and her alone.

“Give it to some other person,” Faith
told him.

There are probably a thousand
people here who’d jump at the chance to meet someone from the team.”

“I don’t think you understand.

The terms and conditions that you signed
off on state that you’ll participate in these activities.

Otherwise, I’ll have to ask you and your
companions to leave immediately.”

Faith sighed. She looked at her family.

Dad with his beer and his wings over by
the buffet table, shot her a warning look not to screw up
his
special day.

Her
mother was looking through her purse, oblivious to everything around her.

Nothing bad’s going to happen to you.”

How
do you know?
Faith
thought, but then she gave in, sighing.

Well, I guess I’ll
see you guys in a bit.

Nobody said anything, though, and then
she was walking out of the clubhouse with the ogre, as he spoke cryptically
into his walkie-talkie, and someone replied through a burst of static.

Their feet echoed in the empty hallways
as he led her to what felt like the electric chair.

The stadium was still empty for the most
part, because the prize had required them to arrive at the VIP clubhouse two
hours before game time.

It had been
neat to have the stadium all to themselves at first, but now, as Faith followed
the ogre to the elevator and got inside alone with him—it didn’t feel
nearly as fun.

They stood silent as the elevator went
down and down.

Faith glanced at him from the corner of
her eye.

“So, are you like,
security or something?” she asked nervously, trying to make conversation.

“Or something,” he replied, not looking
back at her.

Finally, the elevator arrived at its
destination and she followed him out and into a hallway that looked like all
the others.

He took one turn and
another, and Faith realized she was officially lost, before he eventually
stopped in front of a door with a nameplate on it.

The name on the plate was Chase
Winters.

Even Faith knew that name, and she had
about as much interest in professional football as she did duck hunting.

Which was to say, she had almost zero
interest in football.

But if you
lived in New England, you’d heard of Chase Winters.

“I thought I was meeting the team, or a
bunch of guys from the team at least,” Faith said, turning to the ogre, her
hands intertwined, fingers wrestling anxiously.

“What gave you that idea?” the ogre
replied, raising his hand to knock.

For the first time, the ogre was less
frightening than what lay behind that door.

“Will you stay with me and then take me
back to the clubhouse after?”

Strangely, he smiled at her question.

But she wasn’t so sure.

Where were all the other people?

She’d assumed that this Meet and Greet
thing would be attended by other winners, other VIPs.

Anything other than her alone in a room
with the new quarterback just hours before his first pro game.

Not caring about Faith’s concerns, the
ogre began knocking on the door.

“The contest winner is here, sir!” he called out, and then opened the
door and gestured for her to go inside.

She was surprised to find herself in the
middle of what looked like a gorgeous hotel suite, complete with flat screen
television, mini bar, leather couch and chairs, and even a small kitchenette
with a stove and microwave.

“It’s empty,” she said, looking
around.

The ogre smiled, but it didn’t reach his
eyes.

“Just hang out here for a
minute and all will be well.

He winked at her, then
turned and left, closing the door behind him.

Faith stood there, her heart
pounding.

What was she doing here?

Everything in her was telling her to
leave, right now, immediately, before something bad happened.

Because she had absolutely no doubt that
she was being set up for something…something horrible.

But then her mind told her that made
absolutely no sense.

She was a
contest winner, and the whole thing was totally legit, put on by the stadium.

Whatever’s
going on, you’re probably going to meet someone from the team and they’ll be
bored and hardly look at you and then it will be over and you can go back to
the clubhouse with your family.

She nodded, feeling better now that she’d
talked a little sense to herself.

And that’s when
he
came out of an adjoining room, wearing nothing but a small towel
around his waist.

It was Chase Winters, of that she had no
doubt.

His likeness was everywhere
you looked these days.

He’d been
the very first pick of the draft, having won the prestigious Heisman trophy in
his final college season, and everyone was talking about his coming to New
England to save the team from the horrible turn they’d taken in the last couple
of years.

Chase gave her a quick nod of his head,
as if this situation was perfectly natural.

“Hey,” he said, walking to the mini bar
and pulling out a small bottle of water.

His enormous bicep flexed with ease and Faith couldn’t help but notice
the tattoo on his flesh—there in stark ink.

The tattoo was a black flag with the
letters RMH inscribed in bright red.

“Want something to drink?” he asked her, straightening.

“No thanks,” she said, even though she
was thirsty.

What if he was
planning on dropping a ruffie in her drink?

“Suit yourself,” Chase replied in a deep,
even voice that was almost melodic.

As he straightened to his full height and
faced her, Faith was overcome with the realization of just how big he was.

He wasn’t normal big—he was larger
than any regular person she’d seen in her life.

He must have been six foot five, but he
didn’t have an ounce of fat on him.

Everything was proportionate to his height, but incredibly muscular,
built like a racehorse.

The other striking thing about him, were
his tattoos.

In all of the posters
and pictures and commercials featuring him—none of them showed the
tattoos that were displayed on his biceps and chest.

The tattoos were intricate, dark, and
forbidding, even though she had difficulty making out exactly what they even
were.

There was a skull with
letters over the top of it on his right pectoral, and then a clock face with no
hands, only numbers, over his left pectoral.

Around those major tattoos were lots of
smaller, finely detailed drawings and letters and numbers that she couldn’t
make sense of.

“Like what you see?” Chase asked,
smirking as he broke her out of her awe-inspired gawking.

Faith
looked around the room.

“Isn’t
anyone else coming to the Meet and Greet?”

Chase looked around too, as if he fully
expected a parade to come marching through the room at any moment.

“Guess not,” he said, and took a sip
from the water bottle, which looked teeny tiny in his hand.

She felt like she
might actually faint, the way those women used to do in old black and white
movies.

Only Chase probably
wouldn’t catch her the way the movie stars always did—she figured he’d
let her drop on her head without batting an eyelash.

“You a big football fan?” he asked,
stretching his arms up and then leaning back against the counter, his small
towel riding up his enormous thighs as he watched her.

She tried to smile but couldn’t tell if
it worked.

He cocked an eyebrow at her.

His face was expressive…but his eyes,
Faith decided, were very cold.

His cheekbones were strong
and angular, and his chin came almost to a point.

“You should give the sport a chance,”
Chase said, the smirk still present on his face.

Chase was handsome, gorgeous even.

But somehow, standing near him, what she
found herself feeling most was a distinctly unpleasant physical attraction to
his body.

It was unpleasant because
it felt dangerous—the way someone might be attracted to skydiving or
mountain climbing or even hard drugs.

Faith had always steered clear of those
kinds of things.

She’d never wanted
to play with fire…not until now, anyway.

Everything about him was powerful and
forceful, like standing too close to a hot open flame.

And Faith was truly scared of him.

You’re
scared of everything
,
she reminded herself.

That might have been true, but this time
she could sense that she had good reason to be afraid.

Not just afraid of him as a person—but
afraid of her own immediate attraction to him.

“I’m looking forward to the game today,”
she announced, clearing her throat and looking away from his nearly naked body,
walking closer to the exit and picking up an ornate New England Nationals
figurine that was sitting on a table nearby.

“Me too,” Chase said, his voice following
her, as were his eyes.

She could
feel his gaze on her, heavy and solid, like an actual pressure on her body.

Borgia Fever by Michelle Kelly
Triptych by J.M. Frey
The Scoundrel's Bride by Geralyn Dawson
Trail of Lies by Carolyn Keene
California Homecoming by Casey Dawes
Crystal by Katie Price
After Visiting Friends by Michael Hainey
Every Breath You Take by Taylor Lee
A Midsummer Night's Scream by Stine, R. L.
The Marriage That Didn't Stay in Vegas (BWWM Romance) by Phoenix Rayne
Our partner